It arrived today in rather huge shipping boxes: 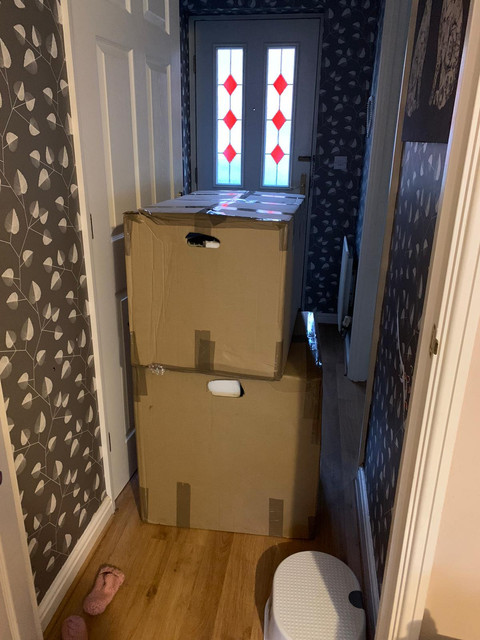 But those boxes had to be so big to protect... 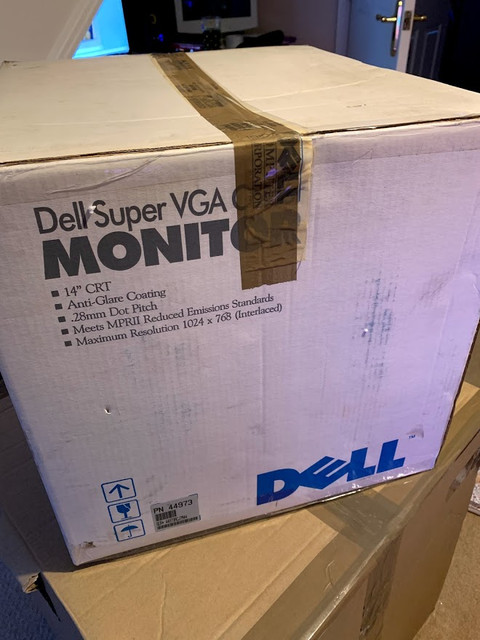 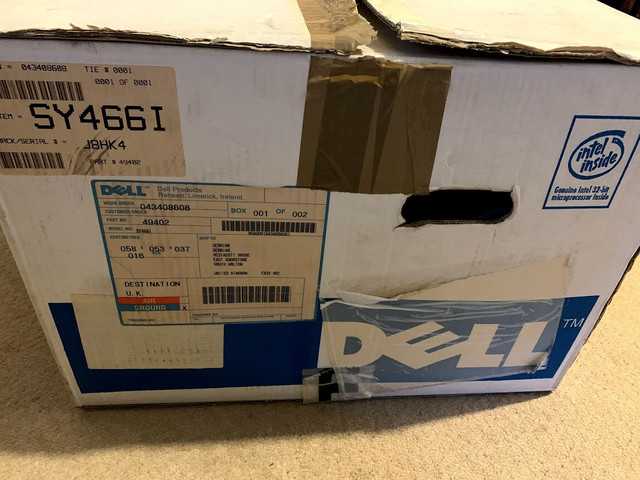 In my excitement I have already got it out and tested it. No explosions and the only bother being a dead socketed dallas style RTC which a quick google search revealed is compatible with Dallas 12887a so I was able to throw in a spare.

Once the kids are asleep I plan to give it a good clean, sort out a hard drive and work out how to mount a CDROM drive without having the rails that should normally be used.

My plans are to put it through its paces, verify everything is where I want it to be and add an AWE32 and CDROM drive. It came with the original Dell windows 3.11 disks which I may install for fun although I feel this machine might stay pure DOS.

Very nice. I'm glad the seller packed it well and you got it intact and without shipping damage. Even if you don't install windows 3.11 it's probably a good idea to image all of those original disks to preserve them before the disks themselves fail.

Very nice. I'm glad the seller packed it well and you got it intact and without shipping damage. Even if you don't install windows 3.11 it's probably a good idea to image all of those original disks to preserve them before the disks themselves fail.

Thats a very good point! I will get onto that this weekend!

I have finished polishing it up and installing the sound card. Unfortunately it is not possible to install a CDrom in this pc as the front panel with the switch is all one piece. Not like it appears from the outside. This is not really a problem as I can just use a CF card as a secondary disk and move my games onto there. But it would have been nice to have. Perhaps an external parallel one will come up cheap one day..

The whole machine is in fantastic condition. Cannot notice a single mark on it anywhere.

I have got it set up now in its space. Running dos 5.0 that was left on an old HDD that I have fit into this machine. I am going to install Dos 6.22 now and then try the Dell windows 3.11 disks.

Dells were always "the most generic of generic", except of the forced incompatibility with some hardware... but somehow, having worked as an admin and head of IT, I just LOVED them. Probably because each and every Dell I've ever had the pleasure working with was simple, tough, reliable and not overly expensive. Precisely what you want in a machine to be deployed in numbers. They generally weren't as modular as HPs, but still convenient enough to work in as well. So I'm curious what this one looks like on the inside (never had the pleasure dealing with Dell until Pentium 2-3 era).

But yes, picking one up today and just booting is pretty much what is expected of a decent Dell machine, even if it is older than the cold war. Great purchase!

It is pretty locked down and has extremely limited bios options. I wonder if there are any alternate bios available that are not as restricted. It does have 3 regular 16bit ISA slots tho!

I have to open it up later today so more pics will be incoming. I am having a lot of trouble with my awe32 not playing music (soundblaster, AWE32 and GM emlation no or very quiet music). It works absolutely fine if you first run the diagnose utility which is annoying.

I also had a scare with the monitor not working, just a flicker from the LED. Lucky it was just a bad power cable.

I installed windows 3.11 from the Dell disks and amazingly they all worked just fine!

I wouldn't be so sure about the BIOSes. There is a chance the board would be similar to something else out there, but almost all the Dells I've worked with had their own custom mobos, and almost all (if not all) had Phoenix BIOS. Which pretty much means no luck modding it. Granted, I don't have as much experience with BIOS modding, just a few tweaks on Ami or Award, like a new bootup logo, so my knowledge here is limited.

Never had to mod the BIOS for work, you see, as we didn't care about squeezing out a few % from some obscure setting, rather how quickly we could fix a broken machine so the user doesn't scream bloody murder. Funny thing is, I've got a nice Compuadd 386 board that I've built a new machine out of (just had the board to begin with), and it is also pretty locked down as far as BIOS goes. Must be a general trend with "business"-oriented machines, I guess. Admins don't care about fiddling, makers don't put the extra bells and whistles to fiddle - at least as far as typical user stations go. High end workstations - now that's a different story altogether. But for Dell that would be Precision series, not Dimension.

As a huge Dell fanboy, this thread simultaneously tickles me pink and makes me green with envy. 😜
Very nice find!

As a huge Dell fanboy, this thread simultaneously tickles me pink and makes me green with envy. 😜
Very nice find!

Thanks I dont have any particular nostalgia for Dell but I do for an OEM 486 if that makes sense.. The matching monitor and desktop pleases me a lot. I have a Dell quietkey keyboard I may add but it is AT and in very poor condition... Ripe for a refurb!

I have finally managed to get my AWE32 going after an entire day of messing around. Thanks to This post!

I am now going to format the machine and reinstall Dos 6.22 as there are drivers everywhere and auotexec/config.sys are very messy. Rather have a nice clean C drive!

Reply 9 of 19, by Anonymous Coward

I really liked the look of the Dell computers from the early 90s just before they started using the new logo.

I find you don't really need a CD-ROM on a 486 as long as you have a large HDD and networking.
If you use some drive overlay software to give you access to the full 2GB of that CF card you can create a partition with the OS and drivers to get the network up if you need to reinstall.
Once the network is up you can simply copy games or whatever across.
For networking MTCP is probably the easier and definitely the faster option.
But I use Windows for Workgroups for that full retro feel.

Thanks for the comments. I have been messing around more with this system.

I do plan to install a network card so I can FTP files onto it.

I am also considering putting the front panel under the knife.. As for me a DX66 is multimedia era and its a necessity. A combination of careful cutting and some 3d print for the internal mounts should see an almost OEM fit.

I will try for some more pictures soon.

I was having some problems with it giving unexpectedly poor performance. Only 28 in 3dbench! It appears I had completely missed a bios setting "Startup CPU speed". This was set to "compatible" but is now 66mhz. Now it scores a more reasonable 42.

Good score man. I hope you have a ton of fun with it.

I've got a few hundred floppy disks that still function since the day they were manufactured. But yes make images of them just in case.

Well yesterday I decided it needed a cdrom and got to work cutting out the slot... I seriously underestimated the strength of that plastic! I will have to take it into work to file smooth but it looks mostly ok with a possible bit too much taken away at the top... Shouldnt be too noticable once a drive is installed but I am gutted with the mistake. The rest of it looks spot on just was cutting at a bit of an angle along the top instead of straight.

Still need to sort some sort of internal mounts but fairly happy with the result. A shame there is a slight gap underneath the CD drive but its not much more than the gap that was already between the case and floppy drive so I feel it looks ok!

Installed windows 95 the other day to test the drive worked well.... And it does 😀

Can't say much with a low rez photo, but to me it looks kind of factory-made. In other words, thumbs up!

Personally I think removing the cutout was a mistake, especially since the CD-ROM drive is not grey. But if you must, a grey 5.25" floppy drive would look much better in there. Ideally you should use some kind of external CD-ROM drive with this system.

I've the problem in reverse, grey gotek floppies in beige cases. Sometimes you have to sacrifice looks for practical use, although if OP wants you can find grey CD drives.
I agree its a tidy job and would be somewhat period correct, I'm sure many machines were upgraded with whatever was cheap at the time so mostly likely beige.
And I've had generic cases that have a big gap under the drive as well so wouldn't stress

Good job on the surgery... Dell actually sold Precisions with the grey as stock (and probably Dimensions too).

Good job on the surgery... Dell actually sold Precisions with the grey as stock (and probably Dimensions too).

Thanks for the link. It seems the OEM ones have the same (or even worse!) gap so that makes me happier!

Also I really like the contrast of the biege/grey. I think a grey drive would be too much 😀