Thanks ... Yeah, that definitely makes sense but I was just wondering if there was any possibility of 3D acceleration (using add-on cards, etc) which might of required a faster CPU.

I also just got off the phone with ICOP in California and he asked if this was regarding building a DOS PC (haha!). It looks like there is quite a bit of interest in this!

@rasteri - Thanks so much for the PCB design and this fantastic project! (and @Muon thanks for answering my questions too!)

Sorry, but I have another question...

The SOM304RD52VIBE1 includes 512 MB NAND Flash which I'm wondering if could be used instead of a dedicated hard drive or SD card?

I work for ICOP in City of Industry, CA. We see that you guys have been interested in incorporating our product into your projects, very cool! If you guys want to talk to someone related you can obviously call the company...but I'm on the forum open for questions. I can help get you set up if you would like to purchase a SOM304RD52VINE1 and are having issues/difficulty. Any tech related questions..... I will try my best to answer or relay to someone who can.

Good luck on the hard work!

I was wondering whether you had any advice on finding a good EU based reseller, and I was wondering whether there was more information available about the "mity-mite" modules, such as availability, and getting expansion boards. I would have asked those questions in PM, but it looks like we might just both be too new to the board.

I work for ICOP in City of Industry, CA.

It's really nice to see you here! I'm new to the project but it's fantastic to see a company reaching out like this!

Sorry, but I have another question...

The SOM304RD52VIBE1 includes 512 MB NAND Flash which I'm wondering if could be used instead of a dedicated hard drive or SD card?

It looks like the SOM304RD52VIBE1 is currently (forever?) not available so ignore my question. I also asked the development board (SOM304DX-DEV-VI) just for testing (ie. serial ports and extra USB ports which aren't on @rasteri's PCB) but it's also unavailable.

Hahaha, amazing. Hello hardenssizup and ICOP! Was it expected that hardcore DOS game enthusiasts would go for your solutions? In my head canon you TOTALLY were and are dos gaming afficionados yourselves!

I guess I have a real question hardenssizup; I'm getting this behavior whenever I want to write large amount of data to my microSD while using Win98se running on my Weecee board that's using a SOM304RD-VI. It doesn't produce the behavior under DOS (but ftp transfers of lots of files will occasionally produce errors, which are quickly fixed by retrying those files). The behavior in win98se:

needless to say, it makes network transfers too painful to bear, it makes mounting CD ISOs from the microSD and installing software to the microSD itself a very slow process (like 8x as long). Is this:

-a known issue with the hardware as it's using the microSD as the main storage device
-a weakness related specifically to win98se
-a problem related to SanDisk microSD cards somehow?

Thanks for letting me know if you've encountered this grievance before.

It was explained to me that since our SOM304RD-VI is only 800MHz and the internet chip is a 10/100MBPS...transferring files through network or ftp will still remain slow unfortunately.

I was wondering whether you had any advice on finding a good EU based reseller,

Have you tried putting in an inquiry on our website? They should help you work something out.

-a weakness related specifically to win98se

-a weakness related specifically to win98se

Has some hero of the past programmed a buffering program to utilize our ridiculous underused 256 MB during file copies?

OR......maybe I actually have to pay attention to SMARTDRV for the first time in my life?

If the SD card controller is exposed to the OS as a PCI IDE controller (even a standard one), it should be using 32-bit drivers.

Mu0n, can you (or somebody else here with a weeCee running Windows 98SE) perhaps share a screenshot here of the Device Manager tab in the System Properties window, with the node `Hard disk controllers` expanded? 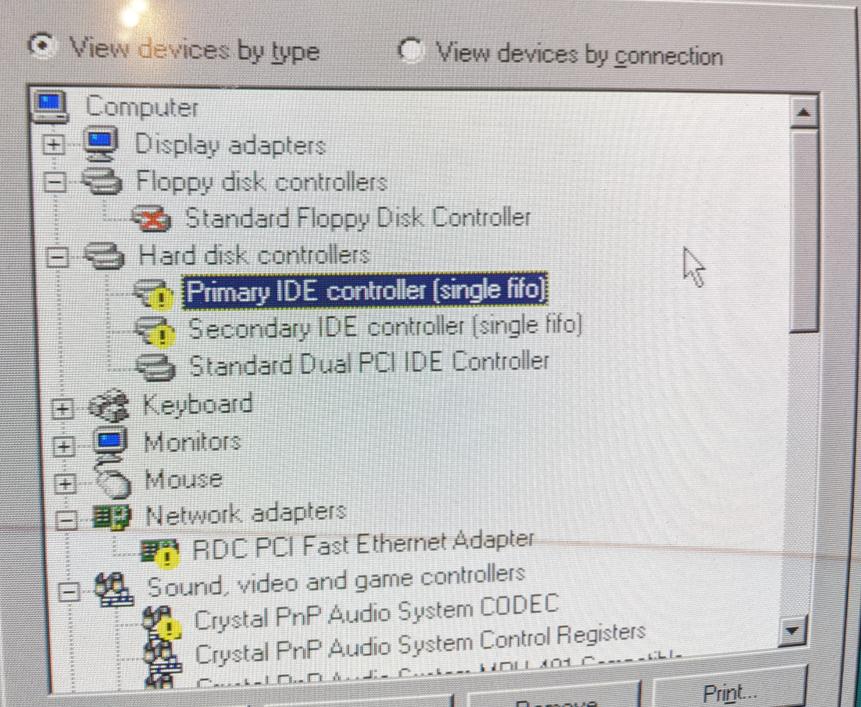 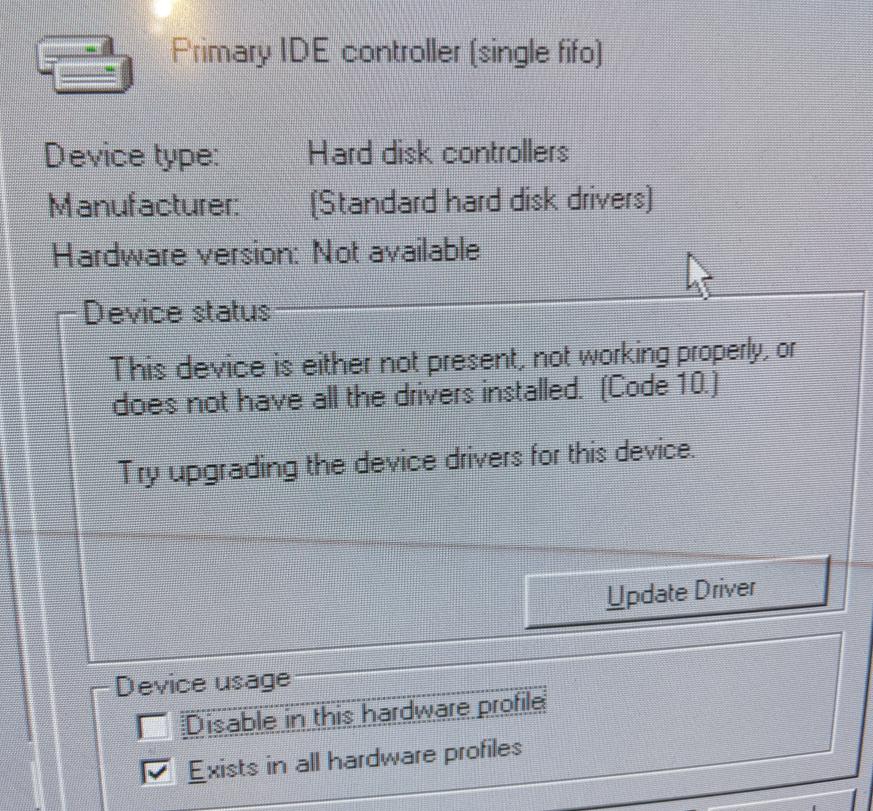 I'm kind of at the breaking point with my win98se install. I'm thinking of redoing it with a do-over. Unfortunately, my old back up CD refuses to read, so I'm searching for another source. Half the time, during bootup, it goes to a BSOD and halts. I can boot into safe mode, then back in normal mode again, but just for one time. I spotted an IRQ conflict with the floppy drive controller (which I don't need) and only by sheer determination did I make the network drivers work for transfers before it never worked again.

This is a video capture of a large folder (1 GB) sent from win10 to my Weecee with win98se. Describing it as 'slow network speed' doesn't do justice to describe the massively long pauses in transfers. It'd take a slower peak speed if it could guarantee regular uninterrupted transfers.

Current rabbit hole (keep in mind this is my 2nd unit dedicated to win98se, so its microsd connector is broken off and I have to clamp down the card so that it keeps contact. I'm using a SOIC-8 programming clamp for this, perfect size and pressure!)

-Backed up the old 2GB+27GB microSD card with the 'ugly win98se' state of affairs with win32diskimager
-Wiped the card, reinstalled a known working DOS card contents 2GB+2GB+2GB+1.4GB with win32diskimager
-Erased D: and dumped the win98se Cd contents (mounted with SHSUCD in DOS) to D:
-Installed win98se with less issues, but it does at some point complain about a PCI device with 32-bit compatibility that it can't have and halts, here's a screenshot 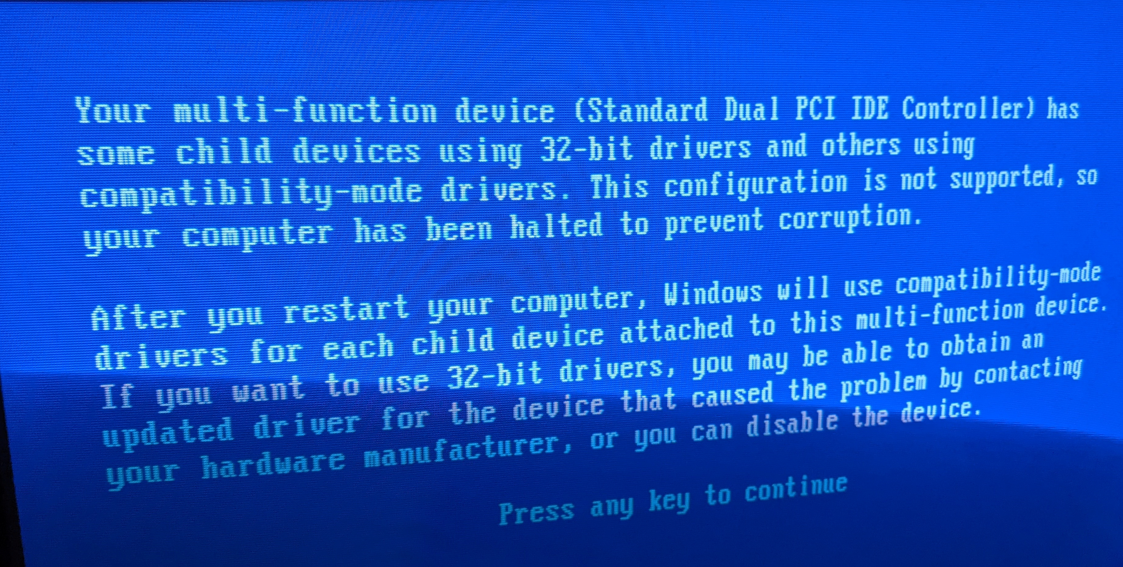 Is it how I initally formatted the card to get to install win98se? I had my primary C partition as FAT16 in order to install dos. In my old card, I let the windows installer deal with the rest (27 GB) and I assume it formatted it as FAT32. With this image from my DOS setup, everything is in FAT16.

So, maybe **another** reinstall if I can get 2 microSds plugged in at once, one through the regular means and the other with a USB-card interface I have? I try that, the bios seems to like it (I wiped another 4 partition cloned card, built 1 new partition over everything, but it still detects 4 partition? Maybe as issue with the software I used), but windows BSOD complains about it before completling its bootup.

Current status: chicken and egg paradox to get a proper, fat32 win98se installation done natively on this machine, not through a VM or something else.

edit - I properly recreated the one partition on the 2nd card plugged by USB, it still detects a new hardware for this usb drive, still get a Fatal Exception 0E in VXD NTMAP(02) + 00000ABA.

edit2 - booted in command line safe mode, trying to format over this 2nd card which is detected fine there. Scandisk complained it had a bad LBA something something.

Edit4-I met a new friend. His name is setup /is to skip scandisk during win98 installation. I've got the single partition 32Gb in the main drive socket and I was able to use the BBS boot up menu from the bios (spamming F11) to boot from the other 4-partition card and get the setup going for yet another install

Edit5- Damnit, booting with the 2gbx4 (occupying c, e, f and g) and letting d run its own setup from d\win98ins lets me do the first part of the installation process (file copying) but it will just refuse to do part 2 after the first reboot. It loads to a black screen and flashing underscore character. This partition can't self boot at this juncture yet...

Current rabbit hole (keep in mind this is my 2nd unit dedicated to win98se, so its microsd connector is broken off and I have to clamp down the card so that it keeps contact. I'm using a SOIC-8 programming clamp for this, perfect size and pressure!)

SD cards have many different modes of work, and some of them don't use certain pins:
https://en.wikipedia.org/wiki/SD_card#Transfer_modes

It's very possible that your broken connector and the rig you're using don't make good contact, or good contact on all the pins, and that's why you keep having problems, because the SD controller is dropping down to another slower mode. It could also be causing read errors which translate to glitches in the software read from disk and crashes.

Consider fixing this somehow, maybe using an SD card extension cable if you want to avoid putting stress on the SD card reader.

I can already rule that out, win98se behaved the exact same way over the network with my other weecee machine, whose sd card connector is flawless.