I find that many people have reservations of Dosbox and SVGA games. Many prefer to play on real machines rather than in Dosbox.

Not to bring in another dreaded Dosbox vs Real Machine thread, I would like to bring to notice about the SVGA games playability in Dosbox.

Dosbox depends on the host CPU, and the more powerful is the host, the better the emulation of higher resolution DOS games in Dosbox.

I have been following the development of Dosbox since 2004. And now, the vanilla 0.74 still remains the main executable I use in D-Fend Reloaded. Dosbox has come a long way, and currently it's quite matured in handling DOS gaming needs.

One of the main portable system I use Dosbox on is my Dell Venue 11 Pro Tablet. It has the Core M 5Y10 processor and comes with 4GB RAM, Intel HD Graphics 5300, and runs off a 512GB Crucial m.2 SSD.

For demanding DOS games, like Quake, I use the Dynamic Core and Max Cycles.

Generally, I'm impressed with Dosbox's SVGA performance even in this Core M processor.

which is very playable, even considering this mobile fanless processor.

Other games I have played and feel smooth are Terminator Skynet and Future Shock (after installing Skynet). But I don't have the fps figures for these yet.

I guess purists will still stick to real machines, and yes, I have to agree, if one wants to play at 800x600 or 1024x768 3D DOS games, then real Pentium II or Pentium III machines are better, but if one has more powerful current gen host CPUs, I would suggest them to retry and test for themselves how well they can play these demanding games in Dosbox.

Instead of deviating to "real machine is better", I would like to keep the discussions to how well a SVGA game runs in the host system using Dosbox. Or better still, what games are dragging and unplayable in Dosbox using SVGA.

**I will update with more games and with my different systems soon.**

Quake isn't that scary to emulate. Demanding sure, but well written and emulates rally really well with little self-modifying. It's those hitchy fiddly Build engine games and Bethesda games you really have to worry about.

I didn't try Duke Nukem 3D before because it was not true 3D. Anyway, I just did a run in the shareware version of Duke Nukem 3D in the first level.

(Type DNRATE while in-game to bring out the fps count)

Might need to zoom in to see the fps count at screenshot was 84.

I always play in full-screen, just windowed it to show the system specs it's played on.

Of course, these values will be higher with modern desktop processors.

Tried using FRAPS with Dosbox via OpenGL output. Not sure how reliable it is, but at 640x480, it's very playable and gameplay is smooth : 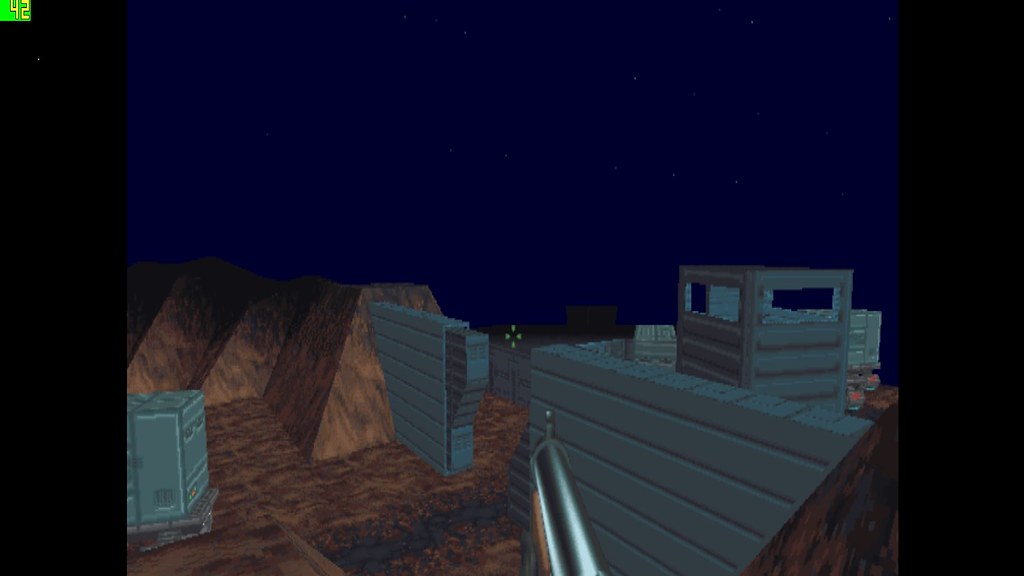 Anyway, my point is we have much more powerful computers now (C2D, atom, i7, i9)..
DOSBox and SVGA shouldn't be a contradicting thing anymore.

A Final Unity is an adventure game, though, and doesn't require updating the whole screen every frame. So it is of course less demanding at the same resolution. Also, while it's true modern computers keep getting faster, remember that DOSBox (as with real DOS games) can only use one core, and is effectively single-threaded, so only a fraction of that performance increase will be seen.

I've done some tests myself, curious about just how fast DOSBox is. I had to choose games playable both in and out of it, and demanding enough that fixed overhead isn't going to dominate. I basically had to choose Build games, plus I verified with MBF 2.04 at 640x400 (vsync off). It seems that DOSBox framerates are about 4x slower than under NTVDM (no sound), and 10x slower than plain DOS. (As you can see, NTVDM isn't really optimised for speed - it's certainly possible to do V86 with less overhead than that - another sign Microsoft wasn't that interested in it). The dynamic core makes about a 5x difference, and is the major factor in making this stuff usable under DOSBox at all. I could timedemo on the Doom port (and manually time it to check the reported framerate was close to correct - it isn't necessarily going to be when in DOSBox). I do not know if there is a timedemo function in Build; I had to just estimate from the FPS counter.

The Build games were run at 1024x768 and 1280x1024 - DOSBox doesn't support 1600x1200 (which would be slow anyway). Do any DOS games besides Build run at 1600x1200? Ken was certainly forward-looking in ensuring Build could run at that resolution, but he (as everyone else at the time) could never imagine that PCs would lose Soundblaster compatibility.

So, DOSBox compared to real machines? It seems that to get speeds faster than DOSBox on the newest computers you'd need a Pentium 4, and getting one with DOS sound support isn't easy. That's for software rendering; for 3D accelerated games (as I don't believe DOSBox can efficiently map emulated 3D acceleration to real 3D acceleration) a real period machine with 3Dfx might still win. So the ultimate DOS machine is still a fast P4, 865/875 motherboard with ISA; a few of us probably have such a machine, and aren't going to part with it for any sensible price.

The Pro Pinball games do.

As I have mentioned in my first post, this is not about Dosbox vs real machines. I too have a P4 3.6GHz i865 and a P2 400 based machines, but this is about how well Dosbox is able to play SVGA, namely the 640x480 based games. (I wouldn't want to play (DOS games) anything higher than 1024x768 on real machines anyway.) Higher res are for later Windows games, imho.

So, I feel, most DOS games are playable in Dosbox at 640x480 resolution - the res that started the SVGA debut of DOS games. This is not only limited to non-3D but also 3D DOS games.

I'm hoping those who have problems playing these SVGA games can post any difficulties they face in running the games smoothly. Again, smoothness maybe quite subjective unless we can display some sort of benchmark for a given host CPU.

@zirkoni : Mechwarrior 2 seems to play nicely in Dosbox in that video. There are some stuttering during close explosions, but otherwise, the enemy movements are smooth.

The Pro Pinball games do.

I think Links LS (yes, DOS version) does too.

Do one for Redguard. See GOG users complain all the time about that one but think they are using the Daum glide build.

Thanks, will try them.

Yep Bethesda games, i've BattleSpire which fast but glitchy with Dynamic core, rather slow but less crash-y with normal core.

It's smooth too. Even on my tablet.

I'll put up a video soon, as soon as I can figure out why the Dosbox is not saving videos in my tablet. (running via D-Fend Reloaded). Using FRAPS makes it choppy a bit.

Moraff's World is the game that always come to mind for something capable of ridiculous resolutions (looks like it does 1024x768), but it's hard enough to justify playing that at all.

I couldn't record from my tablet, don't know why. File is not saved.

Anyway, I recorded this from my Dell Inspiron 7559 laptop :

All graphics settings set to max.

The gameplay is slightly stuttering when using recording. Otherwise, it's much smoother. No stuttering frames or breaking audio.

Gameplay and audio stutters if RAM is high. 63 MB caused most games to stutter.

On the above laptop in Duke Nukem 3D shareware, at 800x600, I get constant DNRATE value hovering over 65fps.

Recording makes it drop to 17, hence didn't record it.

A Final Unity is an adventure game, though, [..]

You are right about this. It does also have 3D scenery, though. It's used in the combat mode and the planetarium.
Calculating these is quite demanding. The game even requires a strong numeric processor for doing so. In SVGA, even more so.

Quake isn't that scary to emulate. Demanding sure, but well written and emulates rally really well with little self-modifying. It's those hitchy fiddly Build engine games and Bethesda games you really have to worry about.

The other day one of my friends said he struggled to get Elder Scrolls: Arena working in DosBox. I haven't tried it myself, but I'm fairly sure it's supposed to work.