OK, I'm absolutely stunned by this..

What happens, if you run the Direct3D test from dxdiag on your secondary card (3dfx Voodoo)? Does that utilize the Voodoo card?

Did this back in the day, and it worked more or less flawlessly. Used to be into illustration, a second monitor to keep the toolbars on to free up workspace was really useful. It didn't cause any problems I can remember with gaming either.

I recall it the other way around though, that the PCI (secondary) card had to have specific support, but you could use any AGP card as primary. Had a Voodoo Rush or Banshee as primary card in that rig, might have ran the dual monitor setup with a TNT later on too, and some S3 PCI card as secondary, probably a Virge or Trio V64. This was about 20 years ago though, so can of course not guarantee I remember it correctly.

I'll make a better post about this later, but I just had to share because I think this is nuts. I "accidentally" managed to get dual-GPUs and multi-monitors working in Win98.

But what caught my attention was ONI icon - I see you are a true man of culture!

I'll make a better post about this later, but I just had to share because I think this is nuts. I "accidentally" managed to get dual-GPUs and multi-monitors working in Win98. Okay, I vaguely knew this was possible, but I thought it was for specific matching workstation GPUs with specialized drivers (i.e. Matrox). But no, apparently you can use whatever you want, and the way you set it up is (1) install the video card and the normal driver you'd always install, and (2) there is no step two.

I remember doing this long time ago. Really the requirements are:

1. Use two or more cards that don't conflict with one another. This is made much easier with PCI/AGP, and pretty hard with ISA (unless made to work in dual head configuration, which is like you mentioned).
2. Use software that can run dual head. Win98 clearly does with your drivers and sets it up automatically. I think it might be possible to run updated Win95b on your same setup if the drivers are compatible with that OS. Could be more work though.

I have a memory that tells me win98 supports up to 9 monitors, natively.

I've never done it with two dedicated cards, but I had a machine with Intel 810E and an S3 Trio64 PCI card that did multiple monitors just fine... Albiet at a considerably lower resolution (Two 1024x768 monitors)

I think I remember doing this with a PCI Matrox card as secondary, but it was the CRT era so it just wasn't practical as a day-to-day setup.

Some cards had a jumper to enable their use as secondary video card:

Today was not an exciting day. I replaced a loud 1cm fan with a quiet 1.5cm fan. That meant different screws. They didn't grip the heat sink metal where the old screws had gone so I used the next fins over on the heatsink. I had to widen out the fins to accommodate the screws. It looks like I'm torturing my heatsink... And maybe I am... 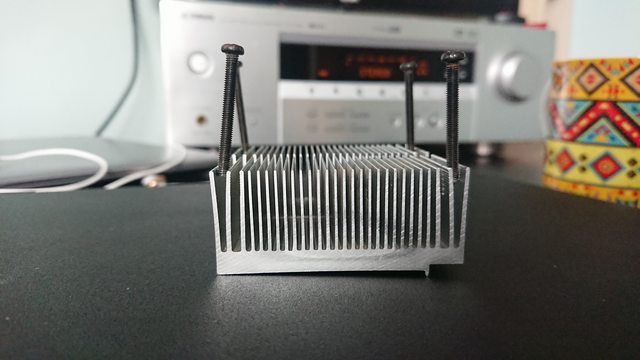 Received a Commodore 64 that I ordered today, to replace my missing one, so I've been playing around with this all day.

Keys are a bit yellowed, but otherwise it is in pretty reasonable condition for the low price I paid compared with many eBay listings. This was a gamble really, as I had no idea if it was working or not. Thankfully it was. Came with an original PSU (which I haven't used or tested yet) & some games on cassettes + 1 Cartridge containing 4 games which I'd been specifically looking for as it contains Fiendish Freddy's Big Top O'Fun. I didn't relish the idea of running the disk version of that game due to the long loading times so having it on cartridge is fantastic.

Also came with a joystick I didn't recognise, but after some research is simply a rebadged Quickshot II Turbo. I quite like those joysticks so now I have 3 of them. 😎 My Datasette units, as expected, aren't working. Waiting on new drive belts to arrive. Was going to try aligning the heads, but I'll wait until I've installed the new belts. For a laugh I tested out 1 of my Datasette units and the results were as expected - Reeled it back in but tape is pretty ruined. No big deal though, I have a couple of 100 more copies of this game in my loft. 🤣

Until my SD2IEC arrives, I'm currently using a Cassette Adapter connected to my PC soundcard to load the games across via TAP to WAV conversion. It will suffice for now and at least I can actually play something in the meantime.

I couldn't find my Composite Video cable, so I tried the RGB Scart Cable from my ZX Spectrum and luckily the pinout matches and it outputs Composite to my TV. That will do until I get the SVideo cable at some point.

Try with metal screws instead of machine ones, their sharper thread crests would probably let you get away with much less tensioning of the fins. Or just drill holes in the corners of the outermost fins, and fasten the fan with zip ties 😀

I have that exact joystick. Paid $0.99 + tax for it, but it needs a good cleaning and lubrication.

Okay, I have no idea what's going on here, but here's a legit OpenGL demo spanning across both GPUs:

I suspect the Rage is running the demo on an OGL surface and it's just passing the half that Voodoo card needs to its framebuffer somehow. This ran really slow, not just in terms of FPS, but also the timing. I don't know if the interplay between the two video cards was causing it - this demo makes heavy use of colored alpha blending and renders internally at 32 bits, stuff neither of these two cards are particularly good at. It took a while, but it got through all three parts with no glitches other than the slowdown.

But what caught my attention was ONI icon - I see you are a true man of culture!

It's a neat game! I was just trying out the demo here but I like what I've seen so far. A friend bought this new back in the day & I remember having some fun playing through it at her place. Shame it's kind of been forgotten.

I have a memory that tells me win98 supports up to 9 monitors, natively.

Hmm, how many PCI cards do I have here? Heh... ha ha... ahahMWAHAHAHAHAHA-

What happens, if you run the Direct3D test from dxdiag on your secondary card (3dfx Voodoo)? Does that utilize the Voodoo card?

Well, this, since you asked:

^^ although this was the DX7 test. After I hit enter, it ran the same test in DX8 mode & that worked fine (spinning cube on the Voodoo, desktop on the Rage.) Both tests ran on the Rage with no BSODs.

I'll admit this setup hasn't been completely trouble free, but it's neat that it works as well as it does. (I've also found that deselecting "span the desktop onto this monitor" in the display properties hard locks the whole PC. Still trying to figure out why that happens.)

Honestly, I can never get dual GPUs to work in my Socket 370 system. I'll give it a go again using a TNT2 M64 and GeForce 6200 PCI to see how they perform.

What's different between a normal TNT2 and a TNT2 M64? I have several of both but I've never been sure.

Installed a Diamond Steath 24VL (VLB) in my 486DX2/66 build today. Also set my memory timing to 2-1-1-1 and wait states to 0 with PCICLK/2. Works excellent with a noticeable performance increase in Doom and Doom 2 -- I can play full screen now without much frame lag at all. I still need to run a proper benchmark, but it is definitely in the 25fps region. 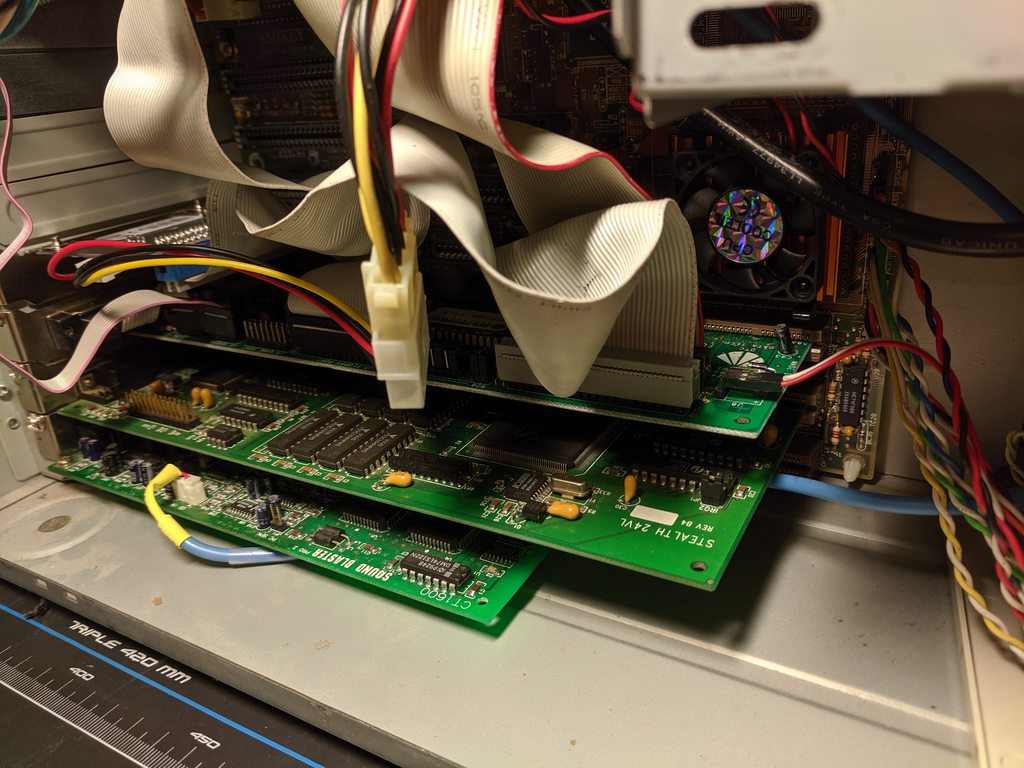 On high settings, or did I misinterpret that? I get about 45FPS in Doom on my Packard Bell Pack-Mate 28 Plus, which is pretty neat using high res and full screen.

What's different between a normal TNT2 and a TNT2 M64? I have several of both but I've never been sure.

So, the TNT2 is a bit faster than the M64 version, right, or am I incorrect on there?