Bought this ultra high resolution imaging device. Now I can take photos like a pro.

It is in like-new condition. No wonder, because it takes so horrible pictures, that no one even back in the day wanted to use it 😁

Given the age, it’s not too terrible. I mean it’s in color and in a mostly still supported format.

Haha, reminds me of my first digital camera, a Minolta Dimage V

Got this Disney Sound Source for a good price. Surprisingly these pop up on eBay quite often and for reasonable price.

Even if you never find a dual socket 8 board, it's nice to keep some PPros away from Gold scrappers.

I sense a disturbance in the force....

This little guy arrived in the mail today, and hopefully it'll work out. I had to go and add the jumpers myself, and I am a bit unsure as to what all it supports, but I can't say I'm unhappy. I have found that at least the A version of the F chip from Winbond that is on the left side of the board supports CD drives on a secondary IDE channel, so I might be in luck.

After all, the majority of the jumper settings are printed on the back. 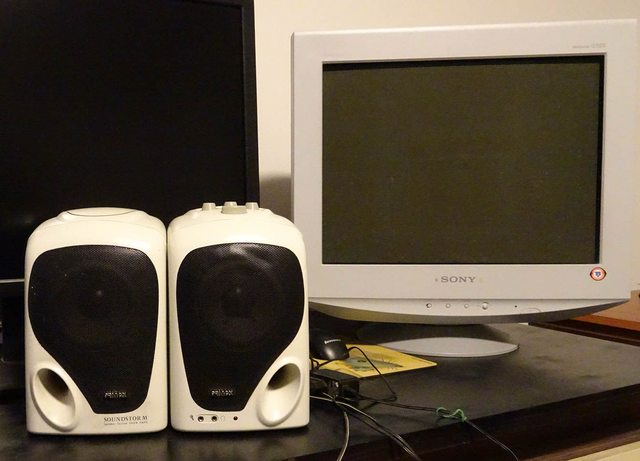 Got this Disney Sound Source for a good price. Surprisingly these pop up on eBay quite often and for reasonable price.
DSS.jpg

Good to know! I've been wanting to get my hands on one of these myself. I'll be on the lookout for them.

The Disney Sound Source is, as far as I know, the best-supported non-ISA (and non-DMA) DAC sound device in the DOS era, and as far as I know, still works in post-ISA PCs, as long as they have a parallel port on legacy I/O address 378h.

I know dreamblaster has a DSS clone/remake planned, but it's unclear when he'll be ready to release and produce it.

16MB, 486DX2, 2MB Trio64V+
CPU displayed as P24D-S that apparently is specialized chip? Heatsink is glued to the CPU and I'm worried I I remove it I may damage it.

Will not post with the IDE to CF card adapter, onboard PCI PIO 4 IDE with LBA (8GB max) support
Cache is in the mail!

CPU displayed as P24D-S that apparently is specialized chip?

P24D is an Intel 486DX2 that supports Write-Back mode for the L1 cache. The "-S" suffix indicates that the CPU supports power management, which is pretty much the norm on 486 CPUs from 1994 and later.

Received an ancient XT clone system in very poor shape today. At least it was very well-packed, so there probably wasn't any (additional) damage during transit.

I didn't even bother powering up the system; the seller said it didn't power on and I see no reason to believe otherwise!

The CRT is in pretty good shape, though, and despite being made in 1985 it immediately sprung to life when hooked up to my current turbo XT machine:

Even if I can't salvage the motherboard/PSU/case this machine has a bunch of tasty 8-bit cards and drives:

Received an ancient XT clone system in very poor shape today. At least it was very well-packed, so there probably wasn't any (additional) damage during transit.
(...)

I have a thing for CRTs of this era, although each time I power one up I expect a big bang, magic smoke or spontaneous fire. Honestly - I'm horrified.

Oh, it's good to know a DSS clone in in the pipeline. Really curious to see what it's going too look like.
I'd buy one for sure.

You don't want to see the pins... (but they are all there)

Bought this pair of Wyse Winterm wt8440xl thin clients (socket 7). One boots according to the seller, and the other just beeps. Both come with their respective power supply. I'm hoping I can get two fully working units out of this.

I have two non-functional cards on the bench for repair already. I would really like to find one of these that isn't broken and at a price I can afford.