I've seen several people mentioning the TL866(II?) also testing DRAM, I can't verify that though as my Genius G540 seems to be indeed limited to SRAM

Got YMF724 and AWE64 (my second one) - Creative looks brand new. Yamaha - well shame that on the other side it says "Made in China" 😉

Today I have finally been able to find what is - at least to me - something like the holy grail of Tualatin mainboards: The MSI MS-9105, aka the Pro266TD Master-LR.
Dual Socket 370 with Via Apollo Pro266T chipset, capable of handling up to 4GB of DDR RAM and with AGP 4x slot, onboard LAN and IDE RAID controller.
The seller lives an hours drive away from me and I know him because I bought a fair bit of retro stuff from him about two years ago. Once all this COVID-19 stuff is over, we'll meet to hand over the board.

Gotta get those dualies.

The only tester I know of that will do nearly all DRAM is B&K Digital IC Tester 575A and runs $1000+ unless you can find a used one on Ebay. https://www.bkprecision.com/products/componen … -ic-tester.html check the manual page 15 for the list of RAM it works with, nearly all the old DRAM seems to be listed. If it were $200 would buy one ASP ! I will keep searching as I want one for 44256 too.

My 386 build is almost finished. Soon I will be playing Quake on it!

Quake might run but you won't be "playing" it by any stretch of the imagination. 😀

Got YMF724 and AWE64 (my second one) - Creative looks brand new. Yamaha - well shame that on the other side it says "Made in China" 😉

Nice! The Yamaha seems to have the SB-LINK header.

The 256MB CF card that I was using for a hard drive on my favourite 386 broke recently. It was an old consumer grade card that got messed up after one too many power cycles at the wrong time.
I've been keeping an eye out for good replacement 256MB cards and found a big lot of Cisco 256MB CF cards - it was an auction but the seller accepted my fairly reasonable offer because it was sitting at 99p for too long 😀

So now I've got 40 256MB Compact Flash cards - they're Cisco branded and from different manufacturers, the Unigen cards are apparently IDE mode w/DMA firmware. Most of the date codes suggest 2012 up to 2016, which is much better than the vintage consumer grade CF cards that I can otherwise get in this size 😀
I now have more "hard drives" than floppy disks!

Industrial CF cards are the way to go. I have several used ones and they have been rock solid and stable.

Nice! The Yamaha seems to have the SB-LINK header.

No SPDIF plumbing, though.

Industrial CF cards are the way to go. I have several used ones and they have been rock solid and stable.

Got myself a modern white ATX case from a distressed importer for around $15; I will be building a reverse-sleeper Windows 2000/98 dual boot build in it. 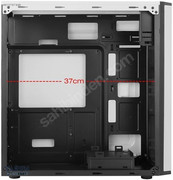 Who was the reseller? Looks nice

Who was the reseller? Looks nice

After looking for a beige case for a while, I found Evercase. Outside of some NOS from eBay, they sell the only beige desktop/tower ATX cases I was able to find. Inexpensive cases, but the shipping was 2x the cost of the case.

Evercase looks nice, do unboxing and review after you get one.

Bought a Tandy Deluxe Color Mouse on fleabay so I can start using a mouse on my 1000A. We'll see how long it takes because...well....COVID.

I picked up a few old IBM ThinkPad laptops from a car boot sale earlier on in the year but I've only just gotten around to taking a look at them.

The first one I picked off of the pile was an IBM ThinkPad 380D Pentium laptop with 16MB of RAM - not only was it relatively clean but it also booted and loaded Windows 95 so it appears to be in full working order!

As you can see I even managed to (just about) play a game on it - the playback of videos was/is terrible but I was able to play the game!

You can see more on my blog here if you wish: https://www.retrocomputing.co.uk/2020/04/test … laptop-car.html