Introduction
I've got lots of retro hardware to test. I will do a Vogons thread for each item. Any comments would be very welcome. Here goes.

A Powerleap adapter can be used with Intel slot 1 motherboards. It can accept a socket 370 Intel CPU. The fastest CPU you can use with it is a 1.4 Ghz Celeron. That's quite fast! This adapter is one of my favourite items of retro hardware. Used in conjunction with an Intel i440BX chipset based motherboard, you can build an excellent retro machine. Here's the hardware I'm going to be testing it with. 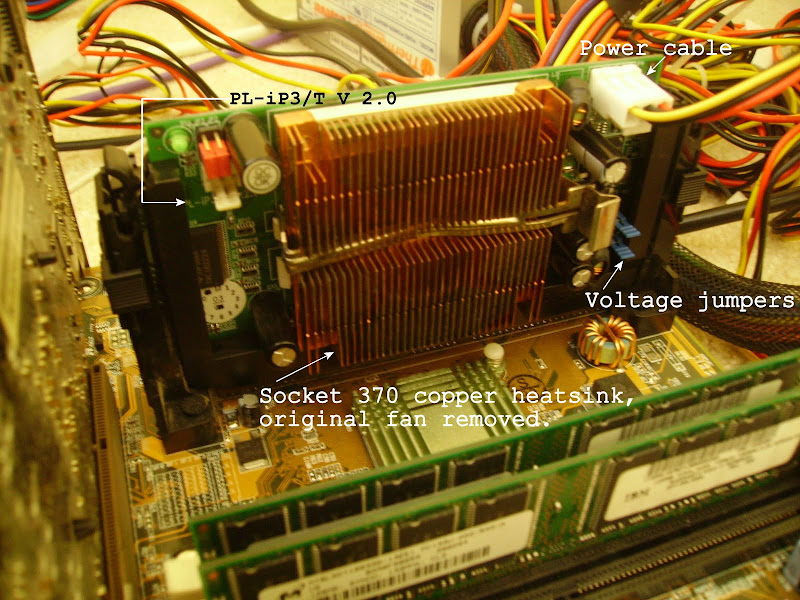 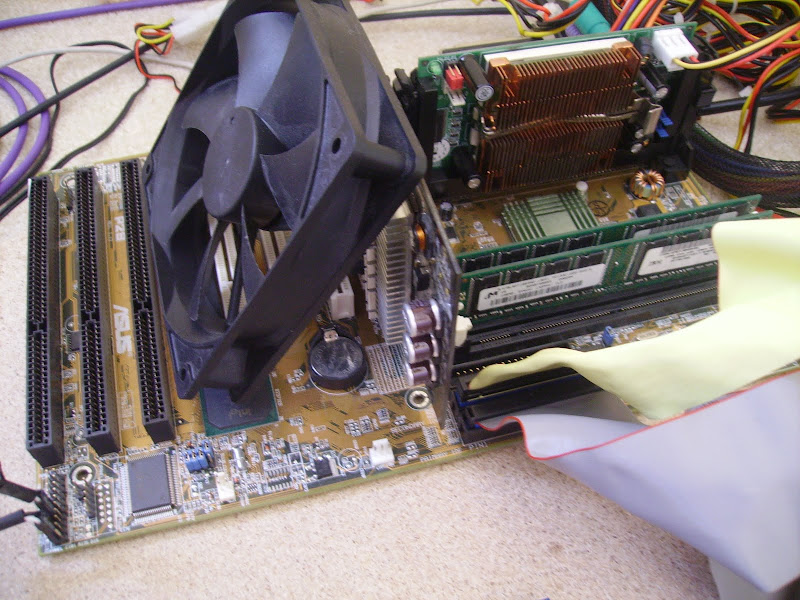 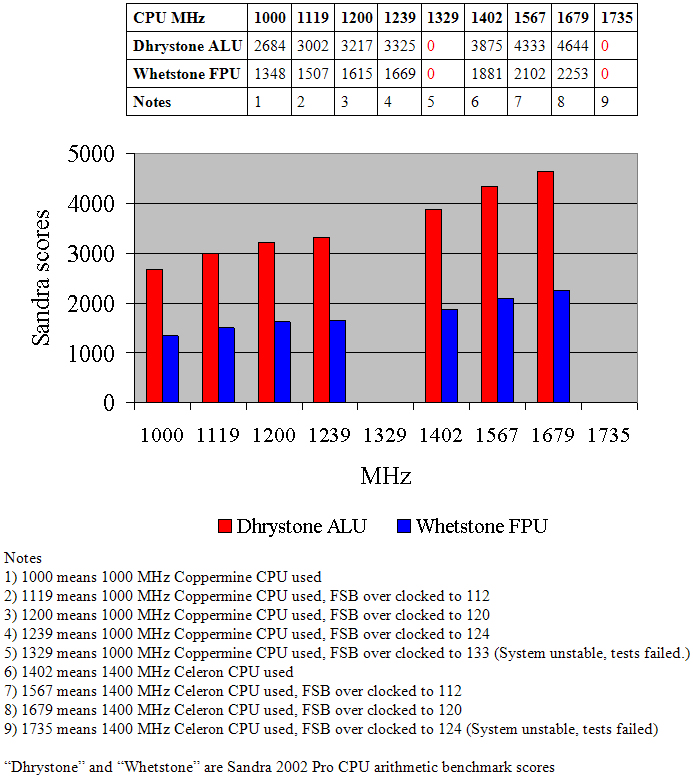 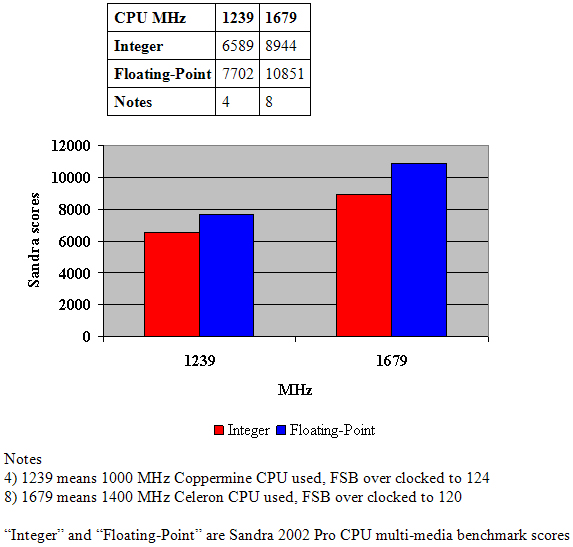 I appreciate that only doing the Sandra CPU benchmarking is poor. If there are other benchmarks you want me to run, please say so.

Question(s)
1) When I removed the Coppermine 1000 MHz CPU from the Powerleap adapter, I noticed that one edge of the exposed CPU die looked a bit "crumbled". What is the cause of this? Thanks for any comments.

Edit: I have decided not to upload any files to the driverguide.com website, because of its poor quality. Instead, I have created a Mediafire file hosting account, and uploaded the 3 mobo BIOS files mentioned above to it. You can see these direct download links, in the post above.

Wow so much effort!

A crumbled cpu die surely isn't a good thing! I guess that's why most cpus come with these heat spreaders. The crumbeling likely comes from mounting the cooler.

Crumbling is indeed usually caused by mounting and unmounting a cooler. It doesn't have to mean the cpu is broken, theres an edge of unused die material surrounding the die itself (atleast there is with Athlon XP).

Wow so much effort!

Hehe, yeah it was quite time consuming. Please note - I've cleaned up the links section.

Crumbling is indeed usually caused by mounting and unmounting a cooler. It doesn't have to mean the cpu is broken, theres an edge of unused die material surrounding the die itself (atleast there is with Athlon XP).

Do you know if a "crumbling" CPU die edge can be caused by other factors, such as "over volting" a CPU?

Unfortunately, several images in the original post had broken links. These have been fixed now. These images show the hardware being tested.

Very nice overclock on the Coppermine! I am ATM also experimenting with overclocking Coppermine chips to see how far they go past 1ghz.

This is the max my mobo can do from bios options. Maybe I'll try cpufsb or some other windows clock generator to push higher. I've seen many Coppermines pushed to 1.125ghz, but 1.24ghz puts you in the epic category.

Why only a Celeron?

Thanks a lot! 😀 OC'ing is a lot of fun - good luck with your experiments.

Why only a Celeron?

I think that a 1.4 GHz Celeron 100 FSB CPU is the fastest you can use in a Powerleap adapter, for use in an i440BX chipset based mobo.

Yep, I love my Powerleap adapter. My best retro machine has one. 😁
Pair of Retro PC's

you can build an excellent retro machine.

Stupid question, perhaps, but what exactly makes this so excellent? Does the i440BX chipset do something that isn't possible on a socket 370 motherboard? Wouldn't you want a retro machine to go slower?

you can build an excellent retro machine.

Stupid question, perhaps, but what exactly makes this so excellent? Does the i440BX chipset do something that isn't possible on a socket 370 motherboard? Wouldn't you want a retro machine to go slower?

So... It's good because it's fast, has ISA slots, and doesn't use a VIA chipset? But like I said, wouldn't most things that could take special advantage of an ISA card be designed for a lower CPU speed?

A quick Google suggests there are s370 boards with the 440ZX chipset.

It's worth noting that it takes a Coppermine Pentium 3 to smooth out the frame rates in some very demanding DOS games. It's also worth noting that there aren't hundreds of speed sensitive DOS games. 😉 Typically, an i440BX chipset based mobo can accept a "slow" Celeron 266MHz or Pentium 2 233MHZ, up to a faster Coppermine Pentium 3 800MHz or 1 GHz (as examples), and beyond that using a fast Powerleap adapter. You've got a useful range of speeds there, to play both DOS and Win9x games. There's an extremely long thread on Vogons here, discussing the topic of underclocked Pentium 2 CPUs, for use in these types of mobos. So it's possible to extend this speed range even further, by having an even slower P2 CPU to use for old DOS games.

A i440BX mobo is a good "all rounder", and it's one that I would recommend if you only want one retro machine. Get one of these, and combine it with DOSBox on a modern machine to play the relatively low number of speed sensitive games which may be in your games collection, which don't work perfectly on the i440BX retro box, and you've covered a lot of ground using a small amount of hardware.

Surely there aren't hundreds of those very demanding DOS games either? Whatever, I'll shut up now.

The BX is good because it's extremely compatible and stable. The same cannot be said of a VIA platform.

I never saw a 440ZX before. But another google search suggests it is a watered down version of the BX.

Surely there aren't hundreds of those very demanding DOS games either?

Hehe, that's a good point, you're right! But it's nice to play any 3D DOS game, knowing that your CPU isn't going to be any kind of bottleneck, and that your FPS rate is maxed out, and so providing the best looking performance.

Whichever way you look at building a retro PC, it's hard to cover all bases using one machine. I'm suggesting that an i440BX mobo can cover most options. If you decide that covering the speed sensitive games is more important, and that DOSBox is not a satisfactory solution, then your best option is to get a 386 or 486 mobo. But if you do, then the SVGA DOS performance won't be as good as the i440BX system, and Windows 95/98/etc won't look too good either.

Haven't you guys run into the pickyness of 440BX PCI yet? Watch out for those 3Com NICs, PCI IDE cards and/or sound cards.

Haven't you guys run into the pickyness of 440BX PCI yet? Watch out for those 3Com NICs, PCI IDE cards and/or sound cards. They tend to get very angry if they are sharing an IRQ and on 440BX there are only 4 INTs to go around, I believe (meaning only 2 PCI slots are truly separate).

That's really interesting. I haven't come across this problem, because I've not used any NICs, and also I haven't used any PCI IDE cards either. I've tested PCI IDE cards on a 440BX mobo, but never used one on a daily basis. As far as sound cards are concerned, I've only used one PCI based sound card in conjunction with either a PCI or AGP graphics card, and luckily not encountered any problems. (I use ISA sound cards, but I don't tend to install their Windows based drivers.)

My Abit BF6 is very sensitive about which card goes where. It's probably partly the mobo's fault but is undoubtedly also related to the limitations of the 440BX PCI bus.

You see that it quickly becomes difficult to keep cards from sharing an IRQ. But in my experience this isn't always the cause of problems. For example, I've found that sound cards seem to work best on slot 4 which shares with USB! Also, the board seems to be less picky when using Windows XP and I've attributed that to better PCI management in some way.

440BX isn't really different from other old chipsets in this way though. It's not worse than its predecessors or anything like that.

An interesting thing here is that the BF6 and BE6-II are the same board but the BF6 gets a 6th PCI slot whereas the BE6-II has a Highpoint UDMA chip.