Just wondering if anybody has some cool hardware collections to share? I've started collecting CPU's.

I've been snapping up the odd ones I find on ebay, and I hit the jackpot on OCAU where I found a guy who was selling his own collection. I now have over 100 CPU's (including a few not shown that are still in boards)
Most of these should still work, the ones I've tried so far do. Some have bent pins but this can be fixed easily enough.

Here are the most interesting ones...

the one on the lower left is an Intel 6MHz 286, which is pretty uncommon because back then they seemed to be soldered onto boards or made by another company - eg I have a 286-12 board which has a 'Zymos' branded CPU on it.

I have 3 387DX's, and 3 AMD 386-40's which were the best 386 you could get. A few 486 SX and DX chips, plus a 486SX2-50. I haven't seen any other SX2's before. The Overdrive with the heatsink, on the top row is a DX4 with a voltage regulator built in; even though its a 3.3V CPU it is designed for 5V boards (thus the voltage regulator). The one to the right with the fan is a P54C better known as the Socket 3 Pentium Overdrive. This is the CPU that socket 3 was designed for, and is the reason why there is an extra row of pins around the edge of the socket when a standard 486 is installed. Normal 486's will fit in Socket 2, without the extra row of pins, and Socket 3 was provided purely for the P54C as an upgrade option. Unfortunately an AMD or Cyrix 586 type processor was normally faster if your board supported it.

Here's a heap of Socket 7 Pentiums plus a couple of 686's for good measure. I don't seem to have any socket 4 or 5 Pentiums, which are quite rare.

Here's some later model cpu's. In the center are various Slot 1 processors; Pentium 2's, 3's and the ones without the black cover are Celerons. The slot type processor was done to bring the L2 cache onto the processor package instead of on the motherboard. The Celerons started including L2 cache built into the CPU core so this design was soon made redundant. This is why the Pentium 3's moved to the Socket 370; basically the same processors but without being mounted on a big card. The fun part about this is that you could buy a 'slotket' adapter which let you run a Socket 370 processor on a Slot 1 board (providing your motherboard could recognise the CPU and handle its FSB speed of course). My 440LX board back in the day could only do 66MHz FSB so I could never upgrade to a 100MHz FSB CPU like a P3 🙁

The one in the center with the big heatsink is a Mendocino 300A, the legendary overclocker. The one on top is an original Covington with no L2 cache and was widely regarded as a dog, and wasn't sold for very long before Intel replaced it with the Celeron A.
On the left, the lower 3 are Mendocino socket 370 Celerons (Pentium 2 based) while the next one up is a Coppermine celeron (Pentium 3 based) and the top one is a Tualatin 1.2GHz celeron, basically the last revision of the Pentium 3.

On the top right are some Pentium Pro's, an Athlon XP 1600+ and a 3.06GHz Pentium 4 - the first model with Hyperthreading.

I've also got a couple of original 'Slot A' Athlons in the mail to add to my collection -they look just like the pentium 2/3's above. The original Athlon was the first consumer CPU to hit 1GHz. After this AMD scrapped the slot design and moved to Socket A for the Athlon 'Thunderbird' and Athlon XP.

Your interesting post prompted me to take a pic of some CPUs I bought from an ebay seller in China. They'll all untested but they look OK. I'll test them in the new year. 10 Tualatins, 2 MMXs, the rest are T-Breds (2400,2600), and finally some XP-Ms 3000. These AMD chips are destined for my "crazy caps of death" Epox boards. The Tualatins will go in to Powerleap adapters for my Asus P2B boards.

I think you do need professional help. For example, a carpenter can build you a nice display cabinet. 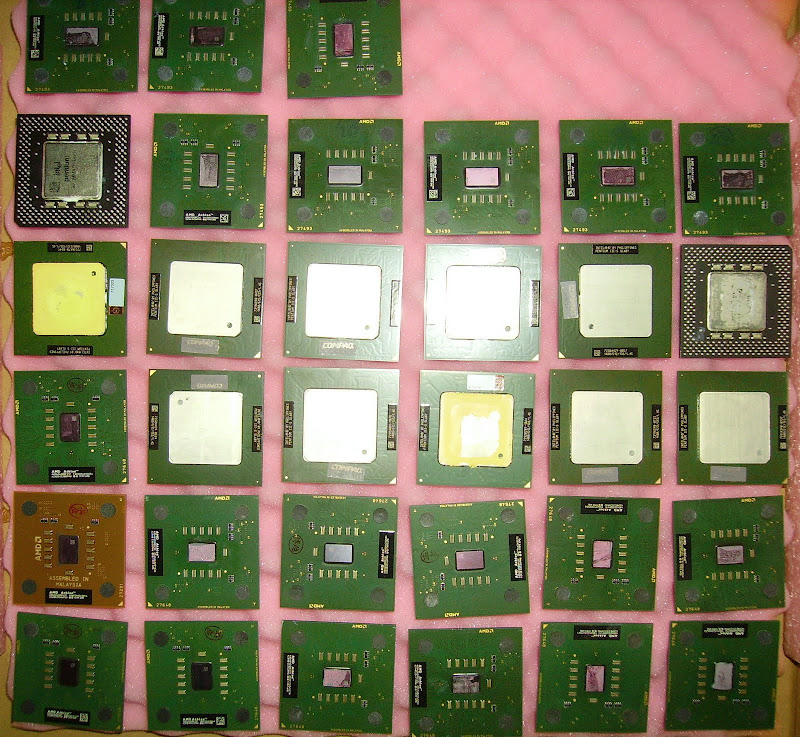 Shame we can't eat these chips 🤣

Buying CPU collections is the way to go!

Some chips are quite rare. That K6-3+ is a keeper for sure!

I'm all about collecting sound cards because of all the differences between different manufacturers. I'll get some pictures of my sound card collection later on.

I collect a whole lot of hardware, including motherboards, graphics cards and (to a lesser extend) sound cards.
If you think you need professional help, then I must be far past the point of no return hehe! 😜

Last time I counted, I had 300+ cpu's, 100+ graphics cards and more then 85 motherboards. I also have 17 or 18 AT cases and a bunch of (not so interesting) ATX cases.
I got lots of memory also...too bad I can't put any in my head 🤣, could use a serious upgrade up there 😜
To store my hardware I bought 600 antistatic bags and got tons of those kiwi boxes which I can stack on top of one another.
To store my cpu's I decided to go the cheap route and made myself some cpu trays made of wood and cardboard.
I always try to only get A-class PSU's. I'm not sure how many harddrives I have, but it always seems too few ahem...
I also have almost all Windows OS's on original disks, except for Vista and beyond. These include 2 98 Beta cd's and a couple of evaluation disks.

I'm also fond of weird media, like the ZIP, LS-120 and (my personal favorite...*drools*) 2.88MB PC floppy drives (not the weird ones with the blue eject button made by/for IBM and no way to mount those in a non-IBM computer) including the disks.

I posted some pics of my attic in the picture thread, I'm sure you can find them there 😉

To store my hardware I bought 600 antistatic bags ...

You have 600 more anti-static bags than I have. 😉 What do kiwi boxes look like? I cram all of my hardware in to fairly small cardboard boxes, then stack them in a large shelving unit. All the hardare is packed together fairly tightly. Probably not the safest way to store hardware, but it saves space.

Edit7: Finally found the boxes! Decided to delete the rest as the post was becoming eligible for "most messy post of the year award"

The ones I use are mainly these:

And I got a couple of these also. Only difference is they are a bit higher.

These boxes are also very sturdy. You can stack 6 on top of one another without much problems (provided it's not top heavy)

(no edit this time)

If I cram hardware in a single box, I'll usually separate them (or try to) with sheets of cardboard, so they don't scratch each other. I've crammed a lot of ISA opti and ESS soundcards that way, since I had nowhere else to put them in.

A couple months ago I spend DAYS resorting all my stuff, basically emptying all the different sized boxes, sorting them in the kiwi boxes, labeling the boxes so I know (approximately) whats in them. I also sort them in such a way the boxes aren't full, so if I get a couple more items I don't need to store them separately again (this is a great way to loose track of where certain items are).
So if I have a box of Voodoo 3's, the box will not be full so if another Voodoo 3 lands in my hands, I can put them with the rest.

I've sorted my ram also, but put them same size and speed in 1 anti static bag and put them in smaller boxes.
My cpu's I either keep in my trays or in a little cabinet with 7 low-profile drawers.

Since I have so much hardware now, I reached a point where I needed to do some serious thinking about how to best store all of it 😜

so basically you are the guys to ask for retro-hardware 🤣 🤣 🤣

I think you do need professional help. For example, a carpenter can build you a nice display cabinet.

🤣 I laughed at this. Maybe thats not a bad idea.

Any particularly rare ones?

so basically you are the guys to ask for retro-hardware

Here's my page detailing a (small) part of my collection:

I have a big collection of old Macs, a few IBMs, and a smattering of "nonstandard architecture" machines (NeXT, Silicon Graphics, HP-PA RISC...)

Any particularly rare ones?

Wow, that drawer of memory! And I like your little laptops ;D

A little sample of my sound card collection in the order I got them:

-SoundBlaster AWE64 Value model CT4500(I found sitting in a box full of broken motherboards, and yes, that cut at the top corner was there when I found it):

-OPTi 82C929A(currently under repair, hence the wires on the YAC512 and the quad op-amp - this is the second time I have to repair this sound card. At first, the 16MHz crystal was broken):

-Avance Logic ALS4000(this is actually a Realtek sound card, and a damn good one for DOS games, the best PCI sound card I've used so far for DOS games):

I'm using this exact card in my pentium 2/Voodoo 2 SLI rig 😀
Its quite a good little card. A3D as years ahead of its time, far better than EAX even today.
Shame that Creative went all Microsoft on them and sued them into oblivion.

In addition I have some non x86 computers ranging from KC85 / CBM8296D to Atari TT030.
The main problem is available space, which makes it always a struggle to decide to get something new old.

The main problem is available space

You need to start thinking like a warehouse...or a distribution center 😜

If you really have no space, put stuff in empty computer cases.
I even used to put 8 AT cases, 4 next to eachother side by side and 4 more on top of them, and called it...a table! Also great for putting your glasses on when you go to sleep.
And you can store some more stuff in the closet where your fresh clothes used to be. Keep your fresh clothes on one side of the mattress and sleep on the other side.
Just put your dirty clothes right in the washing machine. That way, if it's full, you only need to put in some of that liquid soap stuff and press the "play" button.

You can put a whole lot of junk UNDER your bed also!!1 ;D

You just need to get a little creative, and make the 'storage' area work for you, it's supposed to fill YOUR needs, you don't need to fill it's need.

If I don't like the way some part of my attic is organised, I'll change it (after it having fed me up for about a year or so 😜 )

Very nice! Especially your Soundcard collection. Great reference and I bookmarked it right away.

I already got rid of alot cases since they require more space than the insides stored separately.
Anyway I do not have enough walls...

HOLY COW!!!! Well, at least, I can feel at ease that I'm not the only one crazy about (collecting) retro pc stuff here! 🤣