I finally got around to trying out each 3D accelerated version of Tomb Raider. The 3dfx, PowerVR, and Verite versions are the best.

It runs even better on PowerVR when the chip is overclocked. I've tried at up to 80 Mhz.

Gah 3 weeks and I haven't managed any retro endeavors at all, not even simple stuff. The first week was all interruptions and randomness, then I went in zombie mode and could barely think and was exhausted, either it was the start of the pollen affecting me, or I maybe got BA2, but apart from brain fog and exhaustion it didn't really have any other covid-ish symptoms. Crossing my fingers for a better week this week.

Finally built P2 configuration. It took some time to collect all the parts. I had stupid things missing, like IO shield or 80mm fan grill 😀.
Cable management is not final ... still testing things.

I really appreciate the designs of these early ATX cases. Maybe moreso then AT cases.

Very heavy and structurally sound case.
Main problem with sleeper builds is ventilation. Basically, you have to "destroy" the case to achieve that. Not a fan of that.

Neither a fan of that and there is the possibility of losing functionality especially with non-ATX cases.

I finally got around to trying out each 3D accelerated version of Tomb Raider. The 3dfx, PowerVR, and Verite versions are the best.

It runs even better on PowerVR when the chip is overclocked. I've tried at up to 80 Mhz.

I'd like to do that, but I can't risk this card. I paid a lot of money to get one new in the box, and I doubt I'll stumble upon one for $20 these days (but I know others can, will, and do).

Well, as of tonight, I'll be adding yet another laptop to my collecction - I bought a FMA3500C on E-bay - it's the color model of their hilariously outdated-looking 486 model, but in COLOR of all things. I used to have the STN Mono model years ago, this one has the trackball on the right above the keyboard and the newer style barrel jack power connector. I guess that stupid;y overpriced shipping was worth it, it got here in 2 business days!

Also might be obtaining a color screen for the DFI soon. After NanTan, I'll be nabbing some NCR/AT&T/Samsung stuff (plus the Rebadged Versa variants or two).

I've been on a bit of a NanTan kick lately.

I really appreciate the designs of these early ATX cases. Maybe moreso then AT cases.

I actually used to not be a fan of the cases that had to make use of floppy drives with removed faceplates, because it would usually mean that any floppy drive in there would not have its faceplate and be kinda useless for to put into a different PC case.

But now I appreciate these cases more.

Very heavy and structurally sound case.
Main problem with sleeper builds is ventilation. Basically, you have to "destroy" the case to achieve that. Not a fan of that.

And I agree fully. I have in some cases ended up making a new hole or improving an existing one using a hacksaw + filing the edges to not be sharp anymore + adding a fanguard (which I sometimes would have scavenged off of a dead or crummy PSU). What I do like is that they are solid and sturdy steel cases and I also like their aesthetics. The modern cases seem to be made of material thinner than canned foods cans with the pressed in motives in the sides and such being mostly there to improve sturdyness. The old cases didn't have that, these were sturdy because they were sturdy 😁
I often ended up using period correct cases for my builds mostly because of the limitation of its ventilation, but to me this is a part that I actually like.

Repaired a crackling issue on my Audigy 2 ZS today.

During initial startup in Windows, it was putting out distorted sound with random crackles. These would subside after a minute or so, but still annoying. After reading on the forum about replacing the caps near the power, I opted to replace those four caps.

Unfortunately during the initial replacement, I failed to notice I'd created a short on cap C195. Whoops! This resulted in the Audigy 2 ZS not even being detected by Windows.

After diagnosing the short and replacing that cap (again), it works. No more crackling noises during Windows startup. 😀

Sweet. I should recap my sound cards someday.

Helpful info, mid-year sound cards are on the capacitor plague spectrum. I should probably replace a *lot* of caps.

Been working on my file servers, which are this side of retro, though I just through of using a retro-ish slim case for the smaller one. The larger one will be between 20-24 drives, if I can mount them all in a Corsair tower. Only about 10-12 will be 3.5 drives, the rest 2.5s, so that's easier to mount. Printing mounting rails for a couple of drives as I have only 4 of the 6 built-in slots in the case. Sucker's gonna be heavy when done. The smaller one will be a VM/Docker container server for retro and vintage emulators. Hoping to have an RDP-enabled set of emulators for as many systems as I can available over the network (to bring us back to retro activity). Acorns and Apples to Tandy and Zenith, I hope.

Trying to psych myself up into "get rid of as much as possible" mode. I won't get down to 2-3 systems like some people do, but I am overloaded. I really wish they still had regular computer shows here, I could get a table and at least make a little more than the table fee. I really need to ramp up eBay but I hate their newer listing software. Way more work than it needs to be for a lot of $10 items. They really have shifted all their efforts to big sellers, trying to become Amazon.

Most of the stuff is cataloged now, I was kind of paralyzed trying to decide what would stay before that. Organization will set you free! Thanks to everyone who has been discussing builds for years here, helping me choose what will go in which system.

I mentioned older mobos in newer systems, I put a PCChips Athlon 1400 into a Dell Optiplex 3010 - I finally got the pinouts for the front panel connectors, though all the documentation is for re-using the mobo and not the case, you could puzzle it out. Unfortunately now I need to try to find a PCI USB card with standard Intel front USB ports for when I rewire the connector in the case. I like the early 201x Dell cases, should respond well to a little paint, new logos and stickers, and maybe color-coded LED fans behind the front grill. I was thinking white and grey fronts instead of black and grey stock, though we'll see if the first one I paint is a disaster. 😀 Only good for baby AT/microATX, of course, being "mini towers".

I worked on a design for a modular 5.25 drive bay adapter for floppies or card readers or whatever (though if I can find one cheap enough I'd go with that rather than spend a day printing something), and I already have an idea to convert the CPU fan to an 80-120mm fan (120 would have a large offset because of the PSU). The cables on this PSU were assembled by a blind man, though, lots of places where things going one place go around other things going other places, makes it tighter than it needs to be around the CPU.

The reality is this Foxconn socket 462 had a lockup problem from the beginning, if left to idle. Now that I think on it. It could be the cpu, xp 2600+. I have others. Maybe I'll have better results with a different/slower cpu. Memory was new (Corsair) afaik. No other sticks I tried would work in fact. 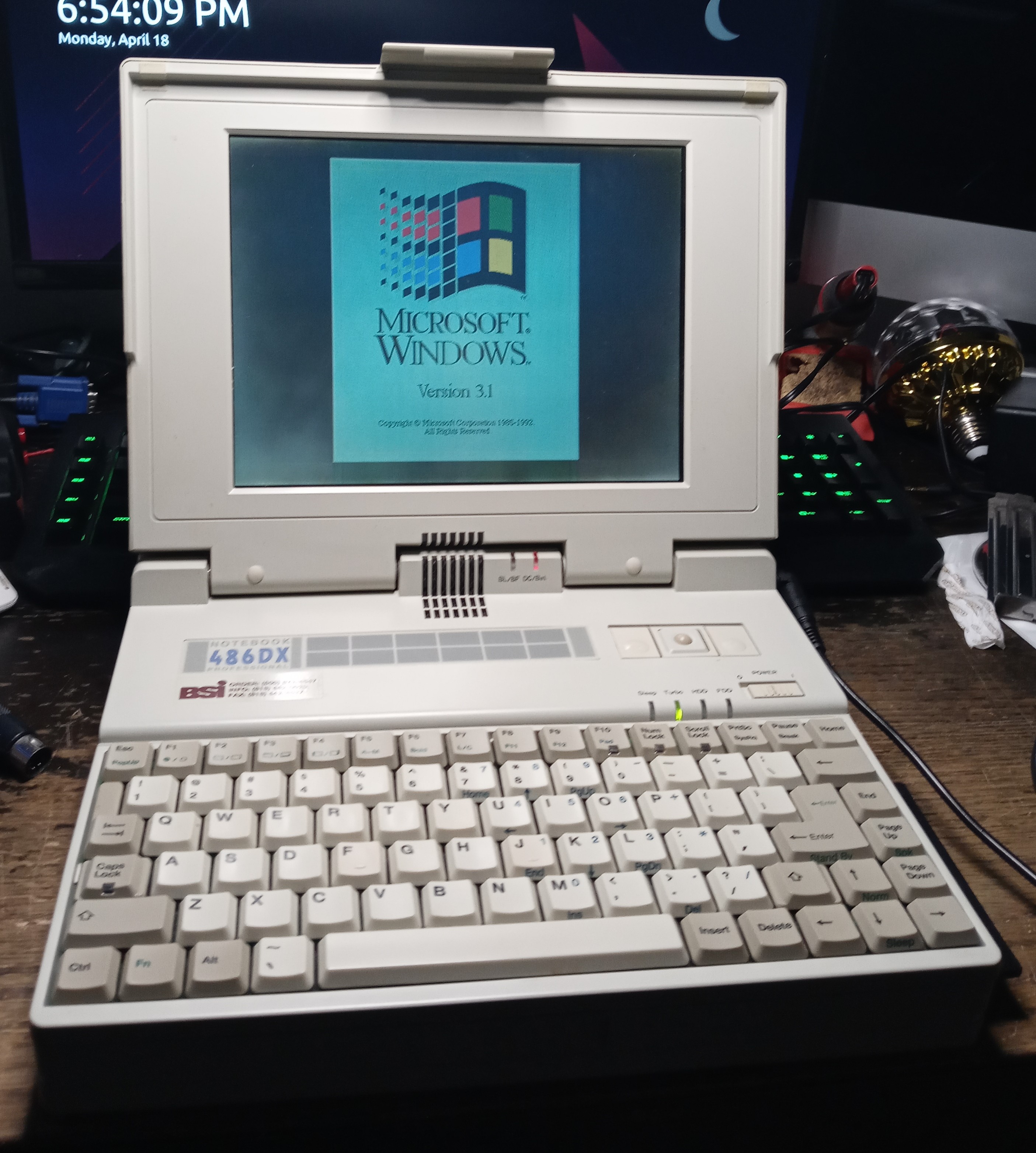 The NanTan 3500C came in earlier than expected. So yesterday I got to film all of the initial expeditions into this old hardware. This one was a oddly hidden e-bay auction that came with a Hayes modem power supply (which did not work), and an AT to PS/2 keyboard adapter (could use more of those in my life).

With my generic $15 power supply - on 20VDC, this laptop is in almost 100% working order. It boots up, the original HDD works, it has Stacker on it (!!), windows 3.1, Tank Wars came pre-installed plus a bunch of other software. Even the NiCAD battery charges and runs for about 30 minutes off a charge (!!).

Things Done
- Cleaned Trackball (the explanation of it's feel is not appropriate forum content...let me leave it at that...."bedroom stuff", 🤣)
- Visual inspection of inside
- Found proper BIOS settings (having internal PS/2 port off made the system hang and lose keyboard input, a bit confusing as this is the laptop I often chastise for having a TOGGLE SWITCH for internal/External PS/2 port usage)
- Found ALL of those special 3500 notebook drivers including the ones for Windows that allows for special functions on the keyboard to work and all the various screen adjustments from the DOS prompt/Windows 3.1

ToDo List
- Remove that Varta Battery - which has spilled it's guts but somehow still holds enough of a charge, I'm thinking CR2302 about the only impact is the hilariously bad internal speaker, which may just be how this thing is. It's on a very bare spot of the board thankfully.
- Put in a bigger HDD (8GB?)
- Figure out some way to clean up/even out the DTSN LCD
- Get one of those LoTech Parallel Port Adlib cards for it

made a video of a hardware recording of Space Quest III running on my Mac Plus, connected to my MT-32. The most infuriating slowness of gameplay paired with flawless, speed accurate music.

Had to completely disassemble my Sharp MZ-700 computer, including the keyboard and it's many many screws, all just to fix 1 non-functional key on the keyboard! A dab of IPA on the key's contacts and it was back to life and promptly reassembled. It looked like a previous owner had performed repairs on that particular key and probably contaminated the contacts in the process.

I then spent the rest of the day going through the collection of games I have in .wav format and seeing which games required BASIC to be loaded first and which could be run straight from the machine code Monitor at boot. There's not a lot of software for the obscure MZ-700, so it only took about an hour tops. Loading the games via an old iPhone, I knew it would be useful 1 day. 🤣

Some interesting games for such an incapable computer and also some noble efforts but ultimately bizarre, such as the MZ-700 version of Space Harrier!

After, the Match Processor is detected

Cleanend the SB16 CT2770 that I bought some days ago. It was in pretty bad condition and cleaning with IPA didn't help. As some users here suggested I let it sit in warm water with dishwasher powder for some time and brushed it carefully with a toothbrush. Now it's all shiny again 😀
Strangely the stickers on the backside are still there but the text on the 46.6Mhz oscillator was washed away.
Some of the traces look concerning but I didn't test it, yet. 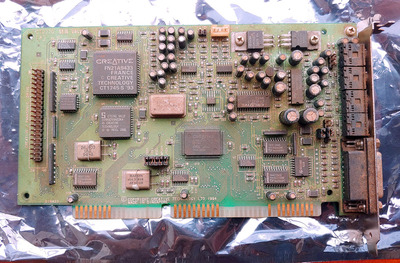 Wow that card looks like new again. Great job cleaning it up. Hopefully it'll work as good as it looks.

Did same with motherboard thas was probably used in a garage computer (very oily). I used liquid detergent. Dried it, and after that washed again with IPA, to get rid of any water/detergent under the chips. And sprayed liberally with contact cleaner 😀.