For some reason I've got working MIDI on the sound card but not working normal PCM sound, which is really confusing me at the moment.

While sorting my PlayStation stuff, I found this and played around with it:

Completely ignored it back then, as when I wanted to cheat, I always used in-game cheats. Today I found out that it can also run backup copys on any PlayStation, so no modchip needed. Now I wonder why modchips were even a thing if you could just plug in such a cartridge...

Likely because modchips are cheaper and work with all PS1 models (even the ones that do not have the parallel port).

Likely because modchips are cheaper and work with all PS1 models (even the ones that do not have the parallel port).

Err... no. Neither the first Action Replay from 1995, nor that very late Equalizer (which is the same, they just changed the name) were more expensive than a modchip and paying someone installing it. And unlike with the latter, you did not lose warranty and got additional functionality.

The PS1 models with no parallel port are not relevant. The PSOne was released in 2000 when the PS2 was already close to being sold. The only other PS1 with no parallel port was the SCPH-900x, which was not very common and interestingly released before the SCPH-750x, which (still/again?) had the parallel port and was the model that was sold until the PSOne came out. You were also not forced to buy a model without a parallel port. Besides, many modchips stopped working with the SCPH-700x series and new ones were required, which were not available until months later.

I'm pretty sure it was more about knowing about modchips and these cartridges. Modchips were a big deal back then and everyone knew about them. The Action Replay on the other hand was probably not widely advertised. And if, they certainly did not advertise that it will play backup copies. Or maybe they did, Sony sued, and that's why it was no longer called "Action Replay" at some point. No idea.

Watching demo's on my Amiga600.

Well, here in Colombia, the modchips were way cheaper than the Action Replay / Equalizer. That, added to the difficulty of finding one, made the modchips very popular.

Received this Commodore VIC-20 that I ordered, today - 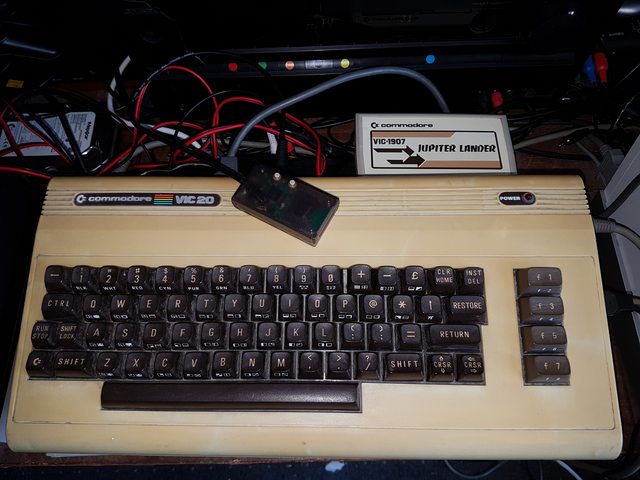 One of the keys was broken off so I'll need to fix or replace that properly at some point. But for now a tiny amount of hot glue sufficed and the key is reattached and functional again. Note: the pic was taken prior to the key repair, hence why the + key looks a bit wonky.

Still needs a thorough case & keyboard cleaning however and I'll have to do something about the severe yellowing. Don't think I'll bother trying to retrobright, I'll probably just end up re-painting it.

But otherwise it's in good working order and I've been testing it out for most of today, loading a couple of games from tape as well as from the SD2IEC. I can't really do too much with it at the moment, as I'm waiting for a 35K RAM expansion cartridge to arrive. So I'm currently limited to just the fairly basic unexpanded RAM games.

Tested a theory to see what would happen if a 5V only EEPROM/flash chip was inserted into a PCChips M912 v1.7 board that has a jumper for 5V chips (JP3 pins 1-2, or 2-3 for 12V chips) above the BIOS type (AMI 1-2, Award 2-3). Nothin blew smoke, fire, or flames at all and it works (I flashed the Award BIOS (made a copy of it, then made it into a 128KB file, then again, and then as a 256KB file since the chip is a 2Mb (256Kx8) flash chip from a parted external modem) using my programming tool). Also received the 486 cooler with the fan and greased and oiled the fan as it was stiff, then tested the other Am5x86-P75 in the 486 build with it set to 3.3V and it works, except turbo wasn't working at all as the board likes WT CPUs for the turbo button to de-turbo the system to a 33MHz 386DX CPU speed. All in all, everything is working. Still waiting for other parts, including the Packard Bell PB450 board that has the 5429 Cirrus Logic GPU so that I can repair, modify, and do stress test on it.

Recapped a few old motherboards. Everything went smoothly, save for the fact I ran out of solder wick, I need to get more, in quantities. Will post pictures tomorrow. Might even make a thread, who knows...

I managed to get not one, but TWO Aztech non-PNP cards (I38-MMSN813 and I38-MMSN824) up and running today. Posting here so that there will be some memory of this when I forget which drivers to use.

Once you get these cards running, I like them a lot. But getting to that point takes so much time because of the sheer number of models.

I'll just put this here for some fun...

Indeed, even if abandonware were really a thing in terms of the legal status of software.

I managed to get not one, but TWO Aztech non-PNP cards (I38-MMSN813 and I38-MMSN824) up and running today. Posting here so that there will be some memory of this when I forget which drivers to use.

Once you get these cards running, I like them a lot. But getting to that point takes so much time because of the sheer number of models.

Got two versions of the NX Pro: non-16 and 16.
Both have Covox Speech Things, Disney Sound Source, supports multiple CD-ROM drives (Mitsumi CRMC-LU005S, Panasonic/Matshita CR-52X, or CR-56X, SCSI*, and early 34-pin Sony*), and are basically PnP (only jumpers that control the parallel port are the ones not considered PnP, but are recommended to leave enabled). The only differences between the two cards:

1) NX Pro 16 has a WaveTable header (Windows only, sadly)
2) NX Pro 16 also has Windows Sound System support
3) Panasonic and Mitsumi CD-ROM controller headers are at a different spot
4) NX Pro 16 has the option to disable the internal amplifier

My non-16 needed trace repairs and it works once again after successfully fixing the sound out issues it had (traces that lead to inductors were removed somehow, but I followed the traces to those posts and it started to work), however, stereo isn't working on the card for Duke Nukem 3D for some reason, but runs like a champ. The volume wheel broke off, so I improvised by making my own version of the potentiometer by soldering 2 resistors together and adding a wire in between the resistors on both sides (4 resistors, 2 are combined to add more resistance and the wires connect to the output line traces/capacitors).

The NX Pro 16 was NIB along with all of the drivers diskettes, utility diskettes, installation VHS, manual, and the list goes on and on. The one interesting thing is I can connect a PC speaker to the speaker output header on the card, but I need to add another wire for the right channel to get directed to the speaker or add another one for stereo.

I consider my cards the holy grail of cards and not only Adlib/Sound Blaster Pro compatible, but with all of the other features that I listed are the frosting on the cake.

This is mine. Already my favorite card that I have used.

Yesterday as per my other thread I managed to get my speed display working and configured. Showing correct speeds too. 100 / 33

This really sets this build off now. So happy with it.

Remade or tweaked all of the Win95 icons I made last year so they're now 8 bit icons. Left the 4 bit versions in, just because it's proper to do so.
Before and after.

Love what you've done with the icons.

That is not the version I am talking about. They freely released every product when the company seized to exist except the display doctor 7 beta. Likely because it was never truly finished. For some systems it works really well and for some it causes trouble. I personally had more luck with version 7 than the older versions though.

Because they released everything else and the company no longer exists someone posted their beta version with key available on a unofficial website. But this was not done by the company itself. Which is why I called it abandonware since in this case development was literally abandoned.

This version maps OpenGL to DirectX so if you are lucky enough to have a system it can do 3D Accel with you would be able to play 3D games on it.

Love what you've done with the icons.