Dune II is a mess compared to C&C.

Received one of these for my Commodore VIC-20 today - 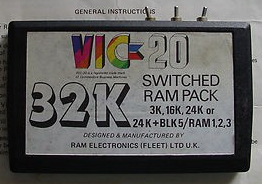 That pic I grabbed from Google images, the one I received has a torn & coffee-stained sticker that I'll clean up a bit (the torn bit is inside the cartridge slot, so doesn't matter). But otherwise it's working as intended.

It came with no instructions, so I had to figure out what each toggle switch did - which was pretty straightforward. For my usage purposes, I'm just going to leave it set to the full 32KB and only toggle the middle switch if I want to run a game requiring 3KB RAM. CBM FileBrowser handles the rest, so no need to mess with switches 1 & 3.

Also got the external RF adapter for the VIC-20, the seller included it with the expansion card. Nice bonus, works well and is nice to have, though I'm using Composite output instead

my no-name CRT just bit the dust so I switched to a Dell Ultrasharp 1704FPV monitor. It's 4.3 aspect ratio and looks decent with retro PC graphics.

Not bad bearing in mind the only soldering I have done in the last 20 years was to desolder a couple of varta batteries and change a tantalum cap.

Anyone who has ever opened one of these up knows it's a game of torture - it's VERY easy to get one of the butterfly springs to get dislodged while popping the cover back on which means removing ALL key caps again, carefully popping the case open again (which is a pain because it uses no screws but plastic (brittle) tabs), reseating every single spring one by one, closing it all carefully again, adding all the key caps once more, and testing every key again to see if all the springs are correctly in position.

After an hour and a half, it's all back together and I have an almost brand-new looking IBM Model M2 keyboard in fully working order, fully recapped with caps that will last for decades: 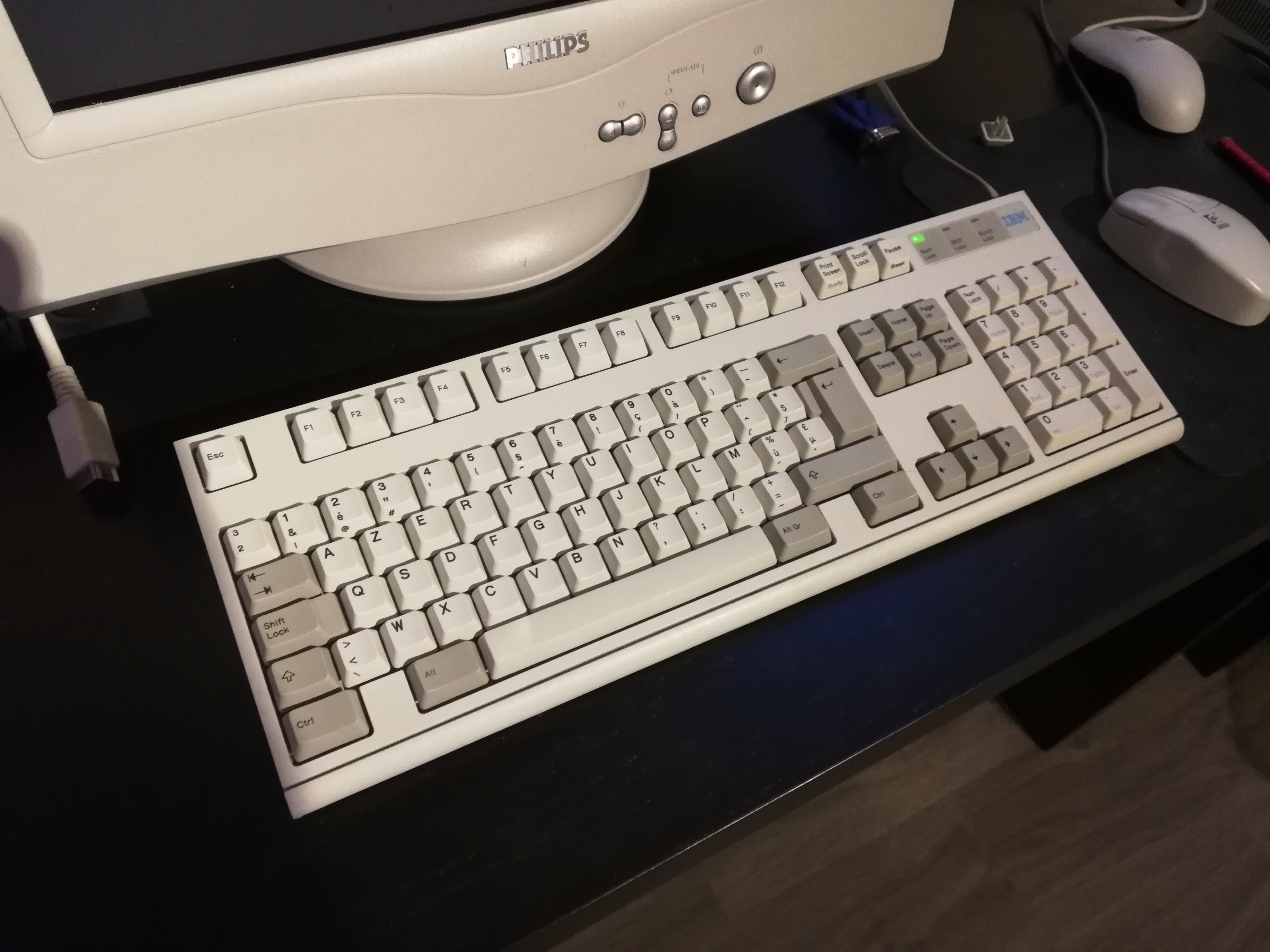 This is especially nostalgic for me because this was the very first keyboard I ever laid my hands on as part of the IBM 386 SX 25 PS/1 my father both back in early 1993. It was dead for decades, missing keys and damaged springs but I found a broken one for cheap and used it to replace the missing parts.

Yep, bless the French insisting on their own keyboard layout *rolls the eyes* and of course the French speaking Belgians had to copy the French so now us Flemish are stuck with a keyboard layout only used in two countries in the world. On the other hand, this keyboard is now VERY rare since there's very few AZERTY keyboards on the market as is (I've been looking for a decent affordable Model M azerty keyboard for ages but they sell for €300-400) but the M2 in working condition is much rarer than the older Model M.

Got my iPAQ 3765 setup with the Targus Stowaway: Tested my Asus P2B-DS V1.06 that I just received in the mail.. next up is a BIOS update, FSB mod, and the dual Tualatin upgrade. And I got my CMS upgrade for my CT1350B in today, however the seller packed them in just a regular greeting card envelope with 1mm of foam on the leg side of the chips. They arrived completely mangled, traveling here from Poland. I'm working with him on Ebay to resend. He seems reasonable and nice. Jebus, did they smash those parts with a hammer? I mean FFS, it looks like it was intentional damage.

I mean, I'd have no issue sending chips like that in an envelope, but i'd use a bit more foam and have a bit of cardboard around it.

Yep, bless the French insisting on their own keyboard layout *rolls the eyes* and of course the French speaking Belgians had to copy the French so now us Flemish are stuck with a keyboard layout only used in two countries in the world. On the other hand, this keyboard is now VERY rare since there's very few AZERTY keyboards on the market as is (I've been looking for a decent affordable Model M azerty keyboard for ages but they sell for €300-400) but the M2 in working condition is much rarer than the older Model M.

If you use this French keyboard, but change the Windows keyboard layout to "English US" (for instance), does the A become the Q? or it keeps being the A even with the changed layout?

Made a custom floppy cable...

Helped my mom get to a Dr. appointment. She is 84, if that is not vintage then I do not know what is 😁

Helped my mom get to a Dr. appointment. She is 84, if that is not vintage then I do not know what is 😁

I hope she is doing well . Best wishes .

Vrm on my LS486E bit the dust. Decided not to boot one-day and after some checkups, showed the dead vrm symptoms of only booting with a 5v cpu.

I'm no repair person and have zero soldering skills so this board is going in the project bin till I pickup the skilll (I really have been needing to learn so badly but other things get in the way). I have a spare VLB board I was meaning to try out someday anyway so here's the excuse 😜

In the meantime I shall cherish my 486-100mhz Overdrive with its built in regulator.

..except now I'm paranoid that one is gonna burn out too! It's not even connected to the big heatsink on the chip. Are these VRMs ment to be heat resistant?

I put a fan on-top and the little chip I presume is the VRM is still hot to the touch!

I prefer the AZERTY layout over the QWERTY layout. I don't use Q/W/; and others as much, I don't need them cluterring the first two rows of letters.

AZERTY is superior for writing French. That was the point, after all.

Some say that QWERTY is better for programming. I do it everyday wtih C-like syntax... The difference is tiny, not worth switching over. A BEPO or Dvorak keyboard on the other hand...

If you use this French keyboard, but change the Windows keyboard layout to "English US" (for instance), does the A become the Q? or it keeps being the A even with the changed layout?

- the different letter layout (obviously) - especially the position of the M key
- the numbers on top are no longer numbers by default by rather characters - if I type the top row I get &é"'(§è!çà)- rather than 1234567890

In games this is a real bitch since quite some games are hardwired to use those number keys and I have to change keyboard layout to US for the games to work - in DOS, it's QWERTY in games by default so I can blindly type in both (barely even look at my keyboard anymore) but for Belgian kids that want that brand spanking cool mechanical RGB keyboard only to find out they never made an AZERTY version ... yeah it sucks.

I spent quite some time getting Might & Magic III and IV working with MT-32 music/sound on my P133.

I have three versions of these games: GOG releases, Ultimate Might & Magic Archives CD, and Might & Magic Trilogy (3-5+swords) CD.

Might & Magic III:
Every version I tried would reset my Sound Blaster AWE64 PNP mixer settings, muting the Line In volume. Why on earth would this game do this? I assume connecting the MT-32 to a dedicated MPU card resolves the issue? Anyway, my Roland speakers have a separate Line IN, so I just moved my MT-32 from my Sound Blaster to my speakers, and now it's fine.

Might & Magic IV:
This was a big pain!
- The GOG version is the CD release, and I didn't want to burn a CD just to play it (plus, the ISO is a stub with the CUE file pointing at a bunch of OGG files in a subfolder... BOO!).
- The Ultimate Might & Magic Archives version requires installation in Windows, which is extremely annoying. I installed on my Windows PC and copied over the folders to my DOS machine... but could not get the game to work no matter what. It would freeze up the moment any sound effects played, even with digital FX turned off.
- The M&M Trilogy CD was the solution! It installs through DOS and works fine. No problems at all... except for an "Exc. Checksum Error" message on the MT-32 (though music appeared to play fine...). A combination of SoftMPU with parameter to delay sysex and disabling CPU cache to bring my PC to low-end 486 speed seemed to do it. The animation was still too fast, so I used moslo to slow it down a bit more. Finally working 100%!!

I've been trying today (and yesterday) to get the network card in my Toshiba T5200 to work in DOS; I've got it working in WFW.
Now I'm trying to find the microsoft network client .

Here you go:
http://www.windowsnetworking.com/j_helmig/dosclnt3.htm
download links not working but they are mirrored in many places such as:
https://www.lazybrowndog.net/freedos/virtualb … urces/MSCLIENT/

It seems there's many ways to upgrade/mod them:
Toshiba T5200 mods and upgrades