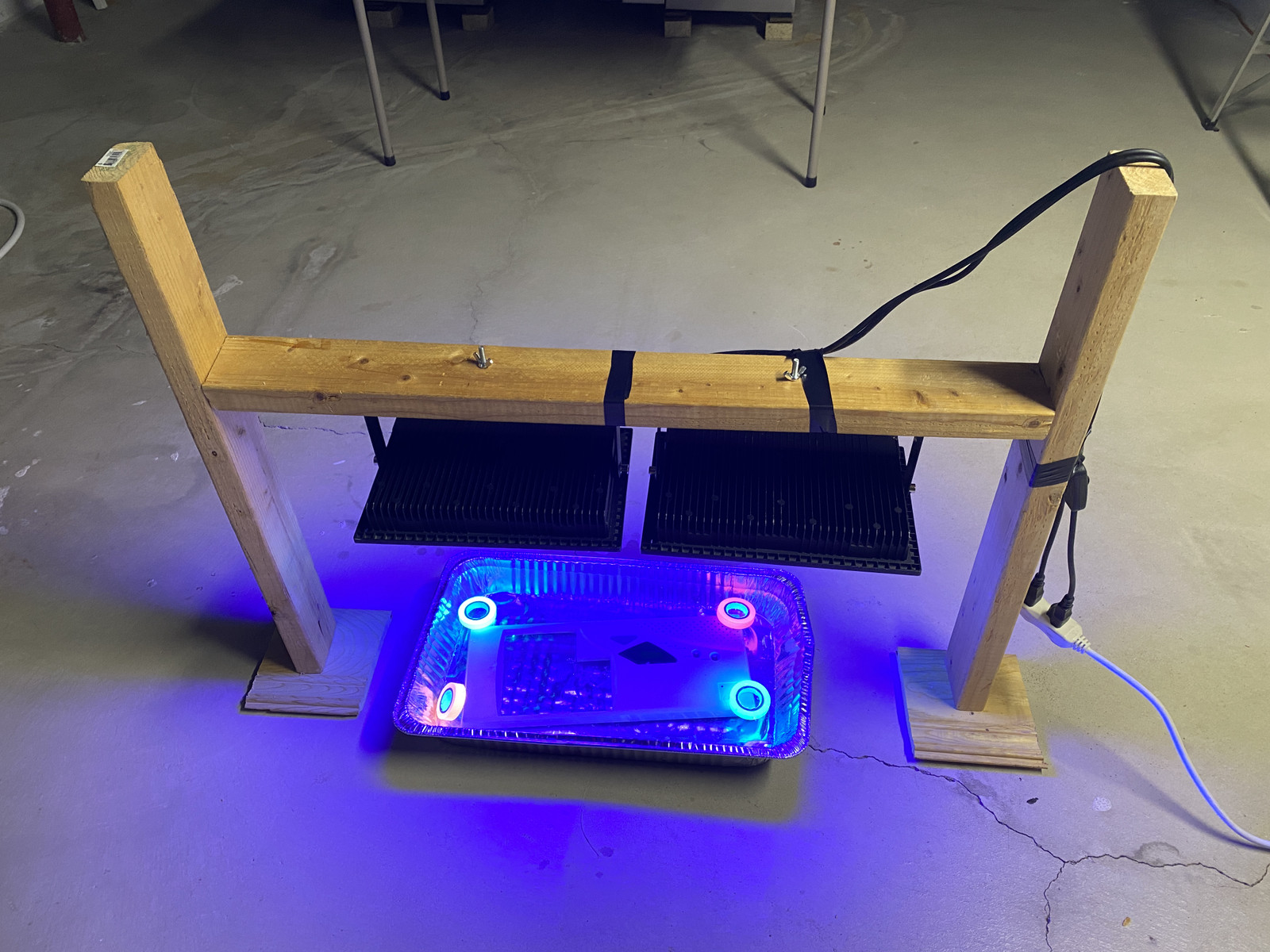 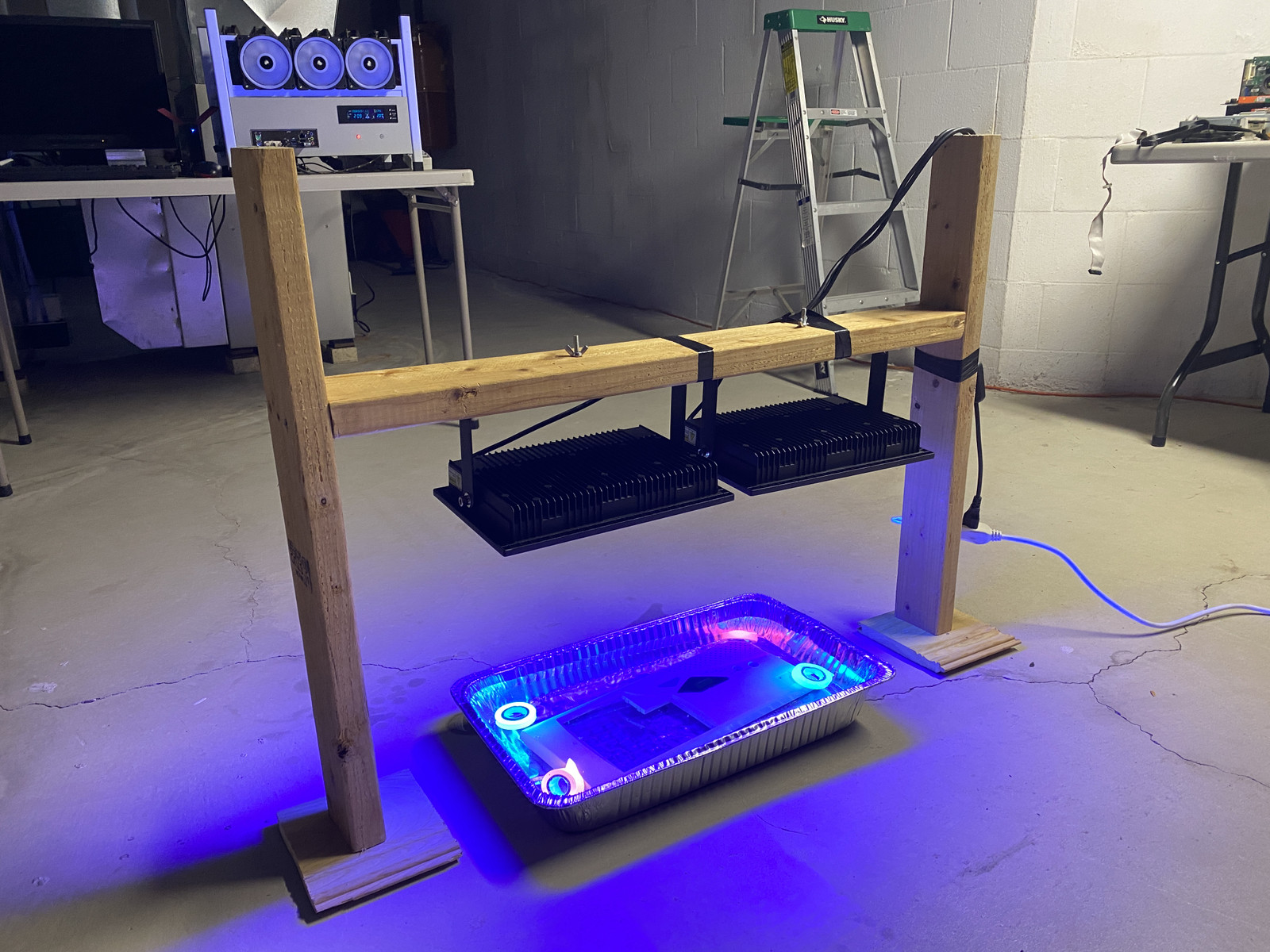 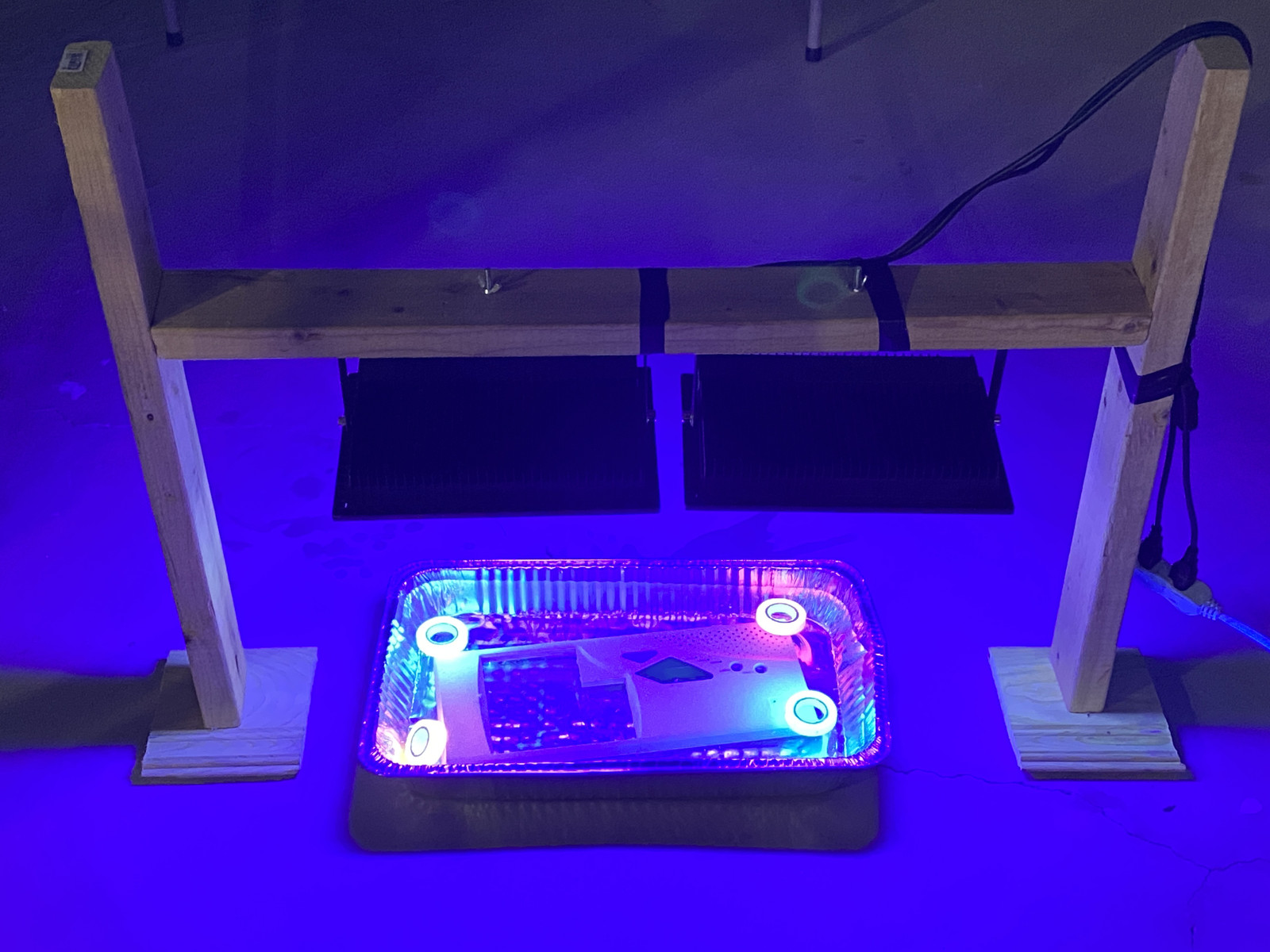 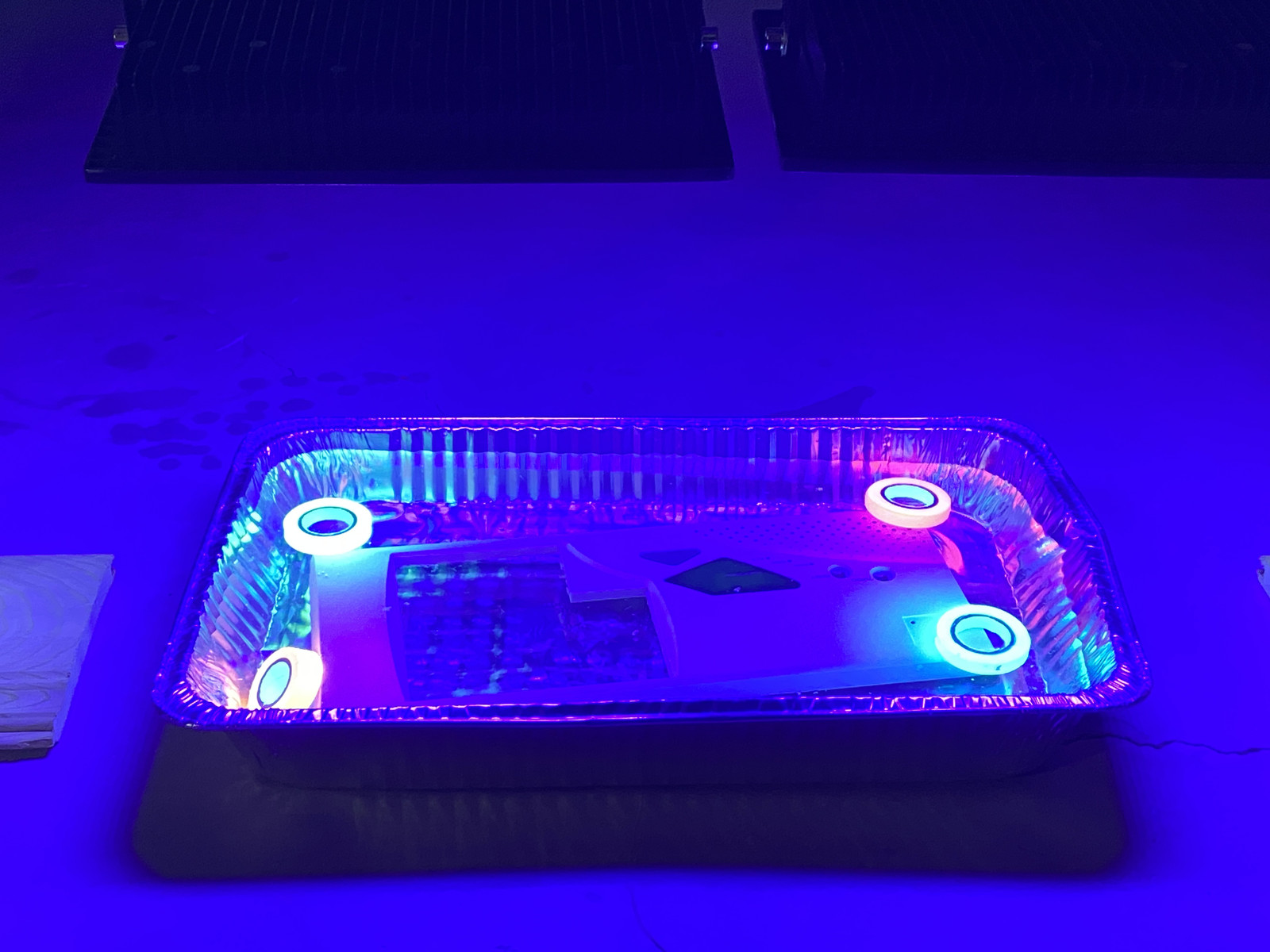 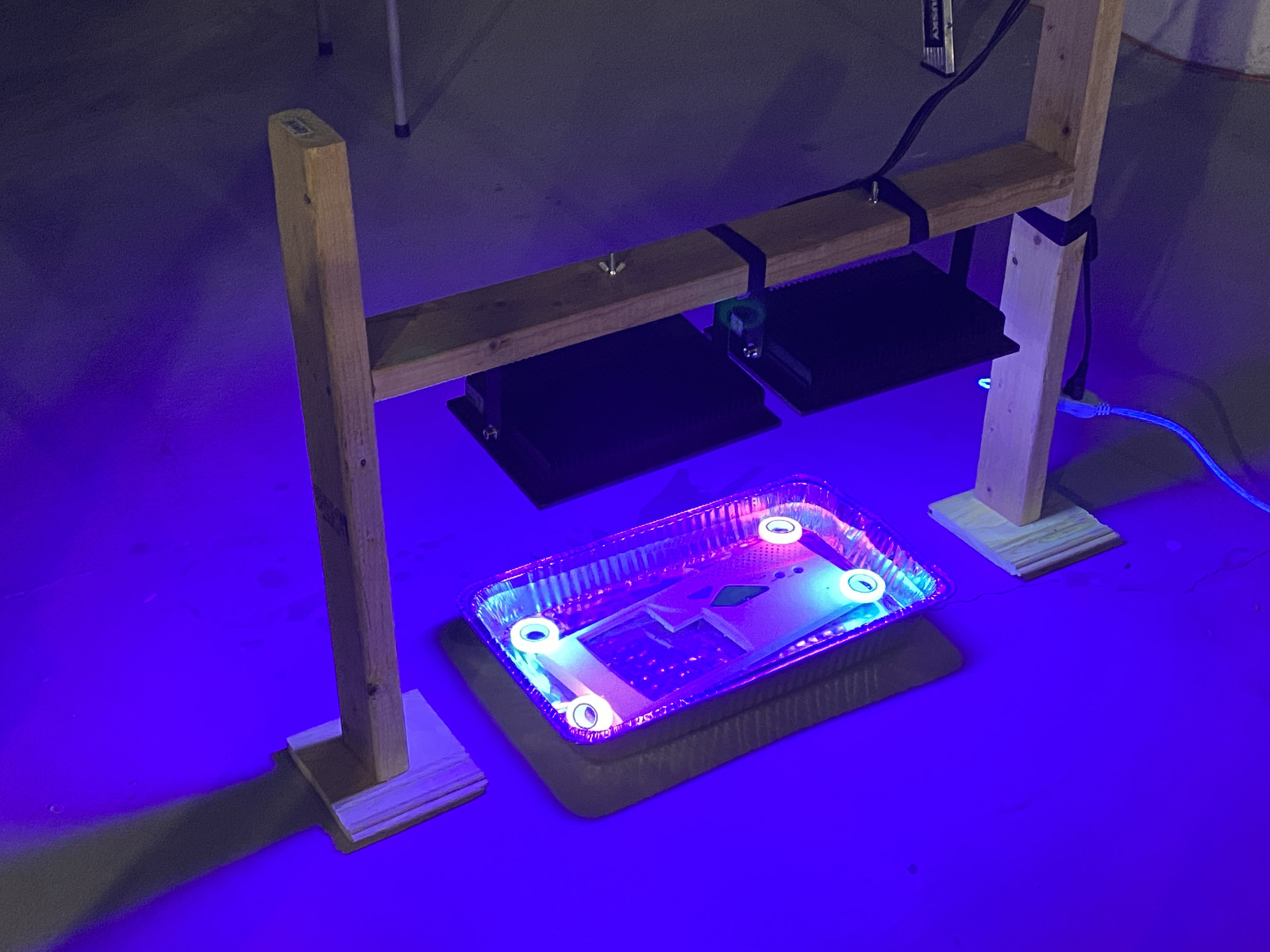 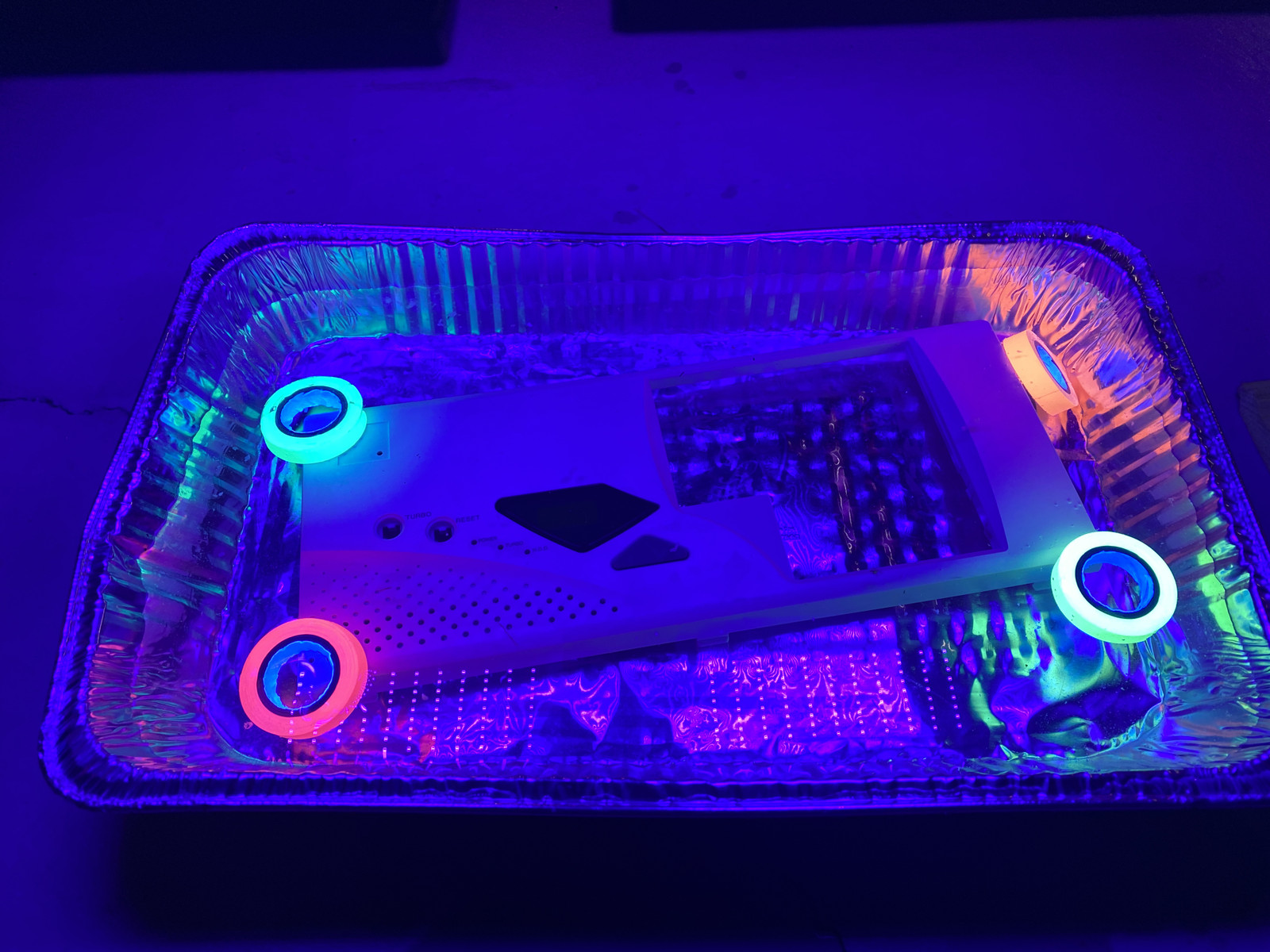 Yes it does. it's quite fun looking

Yes it does. it's quite fun looking

At first it looked like it was small but then realized that is a full case front soaking. Good job ! Please post some pic's when done.

At first it looked like it was small but then realized that is a full case front soaking. Good job ! Please post some pic's when done.

Will do! It turned out great - I will attach a picture tomorrow.

Is that an aluminum turkey baking pan? Luckily peroxide and aluminum work well together.

My Windows XP build is almost finished. That case is so made for Windows XP silver theme. No idea about the brand or model. That little orb unfortunately does not light up or do anything fancy. Any tips for silver front panel fan controllers?

I think I found two that would look good with your case.

They have a decent selection of silver front panel devices if these two don't suit your needs. My brother had a very similar looking case back.

Wrote an entry on my blog, on how to mount an Amiga harddrive in read/write-mode on Linux. Not much, but at least it is something....

That will be a nice machine for some WHDloader-Action.... Not that 1mb Chip will get you far, as you need 2mb Chip in order to have full WHD compatibility. My 500-Desktop have only 1mb Chip, and is much like your's. That is in terms of spec's. (1mb Chip, 8mb Fast and HDD). Yet any Amiga is awesomme stuff. I have OS 3.1.4 in mine as of now. And I have installed a 20 gig PATA-HDD in it. The goal with my miggy, is to have it running as an ADF-Bank and MOD-File player.

So true.... So true.... Superior gaming platform between 1987 and 1992. Hardware arcitecture is one of the most beautifull ever created. So elegant.

Repaired a MicroATX slot-1 board that had a broken PLCC BIOS socket. 2 corners of the socket were cracked ever since I bought it on eBay ~10 years ago. I used that board for hotflashing PLCCs because the cracked socket made it easier for popping chips in and out. That took a toll though, and as the socket disintegrated from this abuse one of the pads got ripped off the motherboard.

I was tempted to solder the BIOS directly to the board, but decided to give a shot at installing a new PLCC socket, which is something I've never done before. I don't have hot air but it looked feasible with an iron. Over the weekend I made the attempt and it worked out fine. The iron melted the plastic a bit in the "floor" of the socket but that's harmless. I also ran a jumper wire to bypass the ripped pad. The board is running well so far, so I'll probably replace the rest of the old caps.

Thanks, those would look great! If only I could find them in EU so I don't have pay so much for shipping.

Thanks, those would look great! If only I could find them in EU so I don't have pay so much for shipping.

Sorry about that I didn't realize you were in the EU I hope you can find something you like locally. How's your system performance?

Sorry about that I didn't realize you were in the EU I hope you can find something you like locally. How's your system performance?

no worries, it's good to have options! I can't remember the score for 3DMARK03 but I finished Far Cry with this build as a stress test. Specs are:

That's a great setup. I built a system very similar to that for a friend around that time frame in highschool.

Ran 3DMark on my recently rebuilt K6-2 500 PC, with 128MB RAM. Then I went into the BIOS and tweaked the RAM timing settings and ran it again.

Not sure if I'd see any further improvement by putting in a PC133 RAM stick, but I'm quite surprised that the currently installed RAM seems happy with the faster timings since one of the sticks claims to be PC66.

I did take a little time to play some games on the Versa M/75 and my 486 DX4-100 Desktop, though I found the Deskto has a RAM problem as it fell on the floor a week ago so I need to reseat one of the 72 pin Modules, it's reading as having 48MB instead of 64MB currently (DOH). Will have some time for that when the docking station comes in.

Currently downloading videos from my "The Creeping Network" youtube channel and then doing some updates to them as I'm consolidating down to ONE channel, the same one I've had since 2006 - "creepingnet" - which has vintage computing, vintage gaming, guitars, auto mechanics, small engine repair, other stuff.....I'm a bit like BBISBISHOPPCM (did I get that right), VWWestlife or Shango66 in that I do more than just one thing. It's just easier as a day-working, married man to handle ONE youtube channel instead of multiple. Plus I'm not doing it for the money, I'm doing it for fun anyway. Also made two huge long videos on both Versas using months of footage, including quite a crack-up of a video on the Words+.

Working on getting a file server set up for home use and for a public vintage/retro FTP.

A pair of E5-2630 v2 CPUs arrived today to replace the bottom of the barrel 2.4Ghz quad cores that have no turbo whatsoever.

So while not necessarily "retro", I am putting it in here since it will be used as a public ftp for vintage / retro purposes.