Still messing with HX DOS Extender, trying to get some Win9x programs working, and learn how to use it. I want to eventually be able to dump M$ completley for retro-gaming and use FreeDOS.

Did a bunch of digging around on various NanTan FMA laptops (FMA2110-FMAK9200) and started building a page on my site on those, and the Samsung Sens machines. I've dug up all I Can on the versa. Some of this is looking around.

I found a vintage 8086 laptop for real cheap locally. It's a rebadged NEC under the Bondwell name.....seriously thinking about getting it after the holidays once some finance things are sorted out. Actually, I'm looking at expanding into buying up broken-up older (Pentium II and older) laptops on E-bay and fixing them up, loading them with FreeDOS, and flipping some of them - and continuing to collect Versa - just found out the 2000 model is a DX4, and I've been looking at another 486 model as well lately that's a little slower - they won't work with my docking station, but it'll be cool to have nonetheless.

Unlikey. A luggable at best.

A few months back, I restored a Gateway 2000 low-profile 486 DX2-50 desktop PC. It came with an 83 MHz Pentium Overdrive processor, and I added a few upgrades as well. Below are the new specs:

I might sound crazy, but I decided to install NT 4.0 SP6 in a dual boot with DOS. And, it isn’t terrible. It boots in about as much time as a P4 takes. It runs MS Office apps without any problems, and I can play MP3s with Media Player 6.

I have to say that I actually like NT 4 better on this computer than Win95. Much more stable. If anything, the Cirrus Logic graphics hold it back quite a bit with 1024x768 resolution limited to 256 colors in the default drivers. Overall, I do think NT runs just fine on this platform.

Did some Voodoo benchmarking today to see what i'd get on my upcoming 166mhz Voodoo build. Granted I only have a P120 OC'd to 133 on hands but, close enough I guess.

Well shit, guess this is why people don't build much with Voodoo 1s anymore. Wonder if a 6mb Voodoo would be faster?

Spent the last few days really thinking if it really makes sense to have 2 PCs set up. My main one (mostly a 166mmx) is used a lot but there some important games for me that need significantly more power to run.
After a lot of thought I decided I would go for 1 rig using my Pentium3 system as a base. It only had 1 ISA slot however and my SW60XG just has to be included. So I had to search for a PCI soundcard that could provide sound for the few dos games I would play (All launched from within windows!) and fortunately I had a SB Live CT4830 in my collection that seems to work very well emulating a DOS card!

Its all running great now although I did lose 3 hours to trying the first PCI card I found (CMI8738) and what I didnt know at the time... A dying CF card.

Unlikey. A luggable at best.

Well close - it's this......just Bondwell branded.....could be a 286 with some more digging. Still practically a luggable but IIRC (I downloaded all of NEC's FTP) it does have battery power (likely NiCad, and VERY heavy). 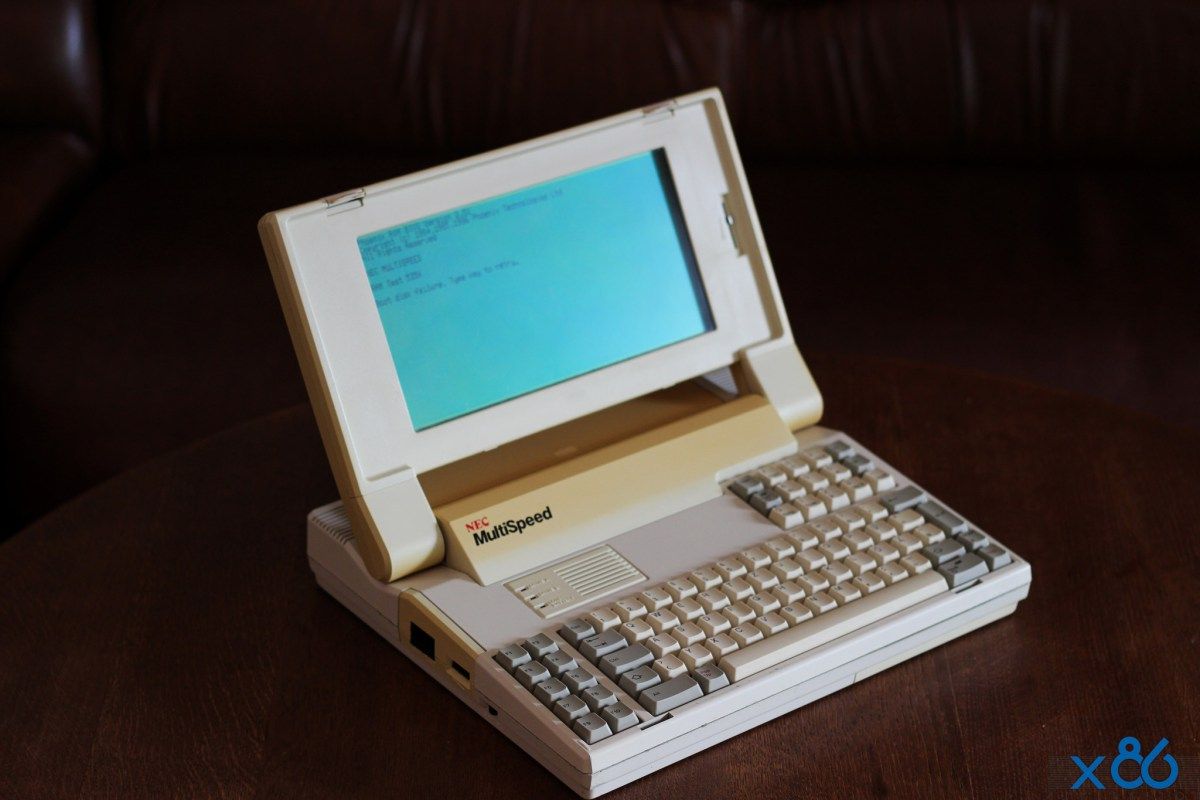 What is their ftp address? I tried ftp.nec.com but couldn't connect, so unsure whether that was right

I did my tests on Demo2. Thanks for your results 😁 Glad to see the banshee doing some work there!

I can't decide weather to break my 1996-1997 accuracy and just use a Voodoo 2 for the better frames and video quality. Or to grab a 6MB Voodoo 1 for the uniqueness and period correctness.

What is their ftp address? I tried ftp.nec.com but couldn't connect, so unsure whether that was right

That's where I found it at. I'm slowly uploading the files organized by model for my site so its a lot easier to get them.

Did more work on the P54VL-PCI board: bath time with vinegar and 99.9% Isopropyl Alcohol and a bit of change, but needs rust removal on the bottom. I plugged it in to see what would happen and it shows -- -- on the PC POST card with all voltage present. So my guess is the QFP chips and the bottom of the board need a reflow.

I plugged it in to see what would happen and it shows -- -- on the PC POST card with all voltage present. So my guess is the QFP chips and the bottom of the board need a reflow.

Maybe not, POST cards indicate -- -- or 00 00 if the memory configuration is wrong or lacking.

I plugged it in to see what would happen and it shows -- -- on the PC POST card with all voltage present. So my guess is the QFP chips and the bottom of the board need a reflow.

Maybe not, POST cards indicate -- -- or 00 00 if the memory configuration is wrong or lacking.

I have been trying to repair a 386 board that gives ---- or sometimes 00-- and the IRDY light doesnt light up. Had given up hope on it.

Fixed the charge/power board on the 40EC so it charges batteries again, next up is to get it a new battery. Turns out some wire going from the second "-" terminal on the primary battery side was burned up and broken off (probably from overcharging the battery and the battery trying to shove 10+ Volts of power through what should only be putting out 7.2vdc). That said, the battery my Versa M/75 and P/75 have been using works well and I think I found the place that still makes and sells them for around $55 apiece - so worth it - so before too long, this Versa too will be truly portable.

Also have been doing some diagnostics and repair to the original motherboard and charging board and might be onto something - first I noticed that a cap on the working charge board is replaced with a generic non-smd style can electrolytic (the others are a lot like the ones I see Adrian frequently replacing on his Digital Basement channel on old macs). I also found one of the tiny SMD caps might be bad too....so might be some time in the future I"m going to spend troubleshooting and diagnosing those. Somewhere between here and there I might want to get another CPU board (V/50, V/75, 40 or 50E boards work I think that at the original Ultralite boards) and start really digging deep. I have a feeling in 20201 I'll be finding myself an Oscilloscope.

I have been trying to repair a 386 board that gives ---- or sometimes 00-- and the IRDY light doesnt light up. Had given up hope on it.

It could, there are many reasons for it, power failure on the board is one of them. I had a working P54C board that gave -- -- only because I accidentally put the RAM chips in the wrong row. Diagnostic cards are a bit vague and don't usually give the exact right code, but rather a crude estimation at what point the booting operation fails. You could be stuck with figuring out if the power failure is a capacitor problem, fuse, broken trace etc. The only way to narrow it down is to use a multimeter.

Tried to use CPU northbridge throttling on an Athlon II X2.

On dual power plane boards the NB voltage can remain fixed (ie. 1.175V) while the CPU voltage can potentially go much lower than that when throttling. On single plane boards they are tied together, and if you lower the voltage too much (for that sweet electricity savings) the NB is likely to start screwing up first, leading to video driver crashes or something. The BKDG describes an option to throttle the NB to half speed which seems like it should work on this CPU. I thought that would let me lower the voltage even more. But it doesn't work! K10stat is supposed to support this, but the program doesn't work at all on this computer. Trying to set bit 22 in a p-state control register using CrystalCPUID MSR editor had no effect, I'm guessing because it has to be set on both cores. So then I hacked phenommsrtweaker so it would set bit 22 in the lower p-states. That got bit 22 to read back as 1 in $C0010070 (control register), but never in $C0010071 (status register). I tried making the CPU speed less than double the NB, and even setting the HT speed to 800MHz. Also checked the disable bit $C001001F and it was clear. No dice.

yet another retro game on itch: https://90soft90.itch.io/super-wild-war-22

I built a fast year 2001 system that I will use in a future project.

The Palomino Athlons are hot bastards, especially the ones from the first batch (AGKGA) manufactured during the summer 2001 and these will often not overclock beyond 1700 MHz without watercooling. The second batch (AGNGA) that hit the market with the 1900+ could usually do 1800 MHz with air cooling and 1.85V - 1.9V. Later batches made in Q1 2002 like the AGOIA first used for the Palomino 2100+ could often do 1800 MHz at stock voltage and diddn't run as hot.

My ultimate year 2001-system scores somehat better than the ones in PC Magazine, perhaps not very surprising as my system is overclocked.

I spent much of my evening fighting with a Kodak Diconix 180si travel inkjet hooked up to my Tandy 8088 laptop. Cute little printer, but it only really works right with bitmap output in Windows 3.1 unless you're okay with output that doesn't fill the page. And that's not okay for a Christmas Banner and Christmas cards! So now I'm in the market for a new old printer. Something with 9 pins, definitely Epson, something that will just work with basically every DOS computer program and can talk Epson MX and caveman hieroglyphics as needed.

Re the comment that 8088 laptops did not exist, only luggables, not so. My machine is a horrifying 14 LBs and has a carrying handle so you can tote it like a briefcase. That's Tandy, cheap and simple was the game . It still basically is a laptop -- I can confirm it can be used on battery power sitting on a lap -- just not for too long, the heft starts to cut off leg circulation!

Around the same time NEC had a diskless 4LB UltraLite and Zenith had a 6LB Minisport that used 2 inch diskettes. By 1990 you could buy a truly practical Compaq LTE 8086 or Toshiba 1000LE with a backlit display and built in hard disk in a slick 6 LB modern clamshell form factor. Modernity! If you wanted a totable monster, you could still have it -- just had to step up to VGA and a 386.