Compared to mpe's benchmarks on 430FX I can see that P100 performs on the Supermicro somewhere between P75 and P90! And it only gives a slight edge over AMD 5x86 and only in some cases. No wonder these board weren't too popular! Right now it feels a bit like a 486 board with a Pentium Overdrive (which it kind of is).

Not really surprising as this board was originally designed for Socket 4 (Pentium 60/66).

Replaced the mobile rack in Pentium MMX with a period correct one.
Ended up having to replace the infamous JST hard drive . The damn thing is just too long. It only fits in the rack if I remove the front. The new one is a 3GB Quantum Fireball EX I was using in my AMD K5.
Later I'll probably just replace it with a compact flash. I ordered a couple with IDE adaptors and they should arrive this week or the next. Though I'd really like a period correct drive in this one.

Thanks! Finally picked up a TL866II+ programmer today. Awesome buy — I've tried a similar device before and had issues, but this time everything worked on first attempt using minipro CLI tool under OS X.

Upgraded the BIOS to the latest 3.2 version. There are now a lot more options in the BIOS, especially when it comes to cache and memory timings. Also VLB waitstates are now selectable (ows/1ws). The CPU Address Pipeline Mode option is now gone (the one that didn't work for me before).

So far I've only enabled hidden memory refresh and shadowed everything in memory. Already got around 0.8FPS in software-rendered Quake under DOS (for a total of 21.5), but glQuake is now slower (20.9 instead of 22.1fps). Memory bandwidth went from 75MB/s to 80MB/s. Tried just cranking up all the timings down but couldn't boot (that actually worked for me on an Opti895-based 486 board), so I'll have to tweak timings gradually.

There is one section in the BIOS that confuses me:

Never seen anything like this. I imagine I should try caching everything (I do have 64 megs available), but I don't understand which base address should I specify.

Unless you need it specifically, (you would know about it, if you need it) leave those regions disabled. 😉

Spent bits and pieces of the weekend recording retro-console Youtubes. Finally got the NEC Versa P/75 and Docking Station videos up. Also started writing out what I"m going to do to go over the entire product line as a last piece. I'm wanting to buy several more examples for this video so we can see the PC-4xx models in action and see the pros, cons, mods, plastic fixes (all that other stuff will be separate videos though).

Tested the self-soldered ISA slot in my Asus CUBX I worked on here and it works perfectly. (OPL3-SAX is the ISA sound card)

I just repaired (again) a Frankenstein laptop that was bad when it was new and still is today.
The issue was that the network card would only connect if manually set to 10Mbps. Auto and 100Mbps wouldn't negotiate a link. In the past I tried replacing the jack (MagJack) hoping it was just a dodgy transformer but it made no change. I then ordered a replacement crab from China and today it finally arrived. 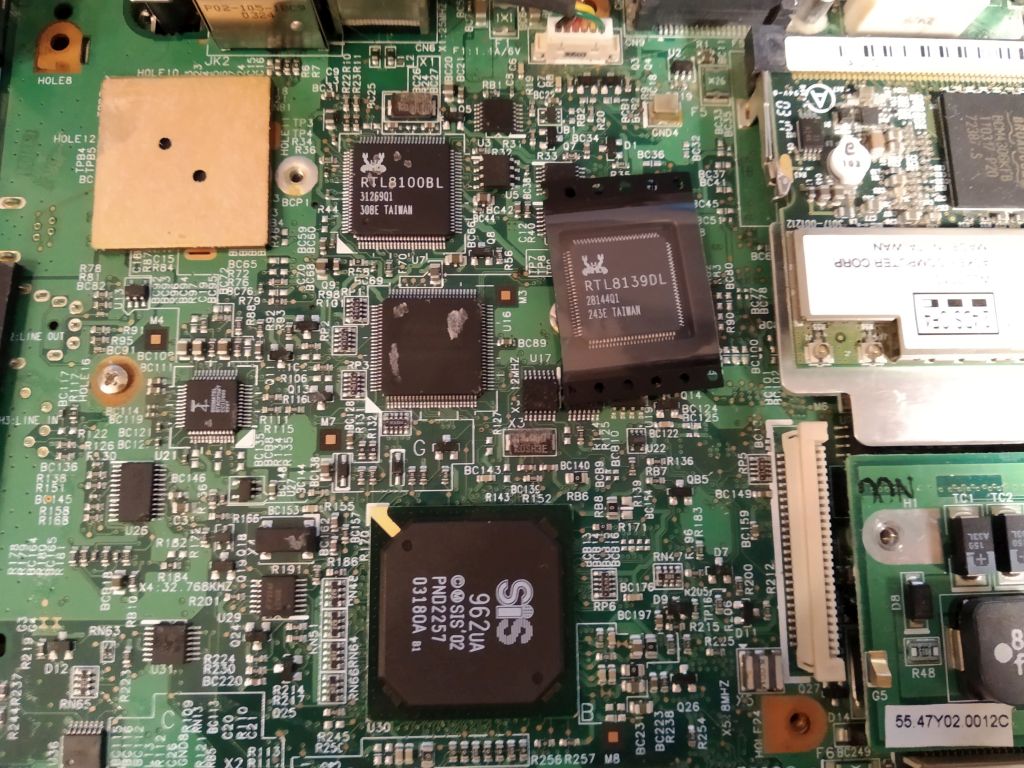 Looks the same to me 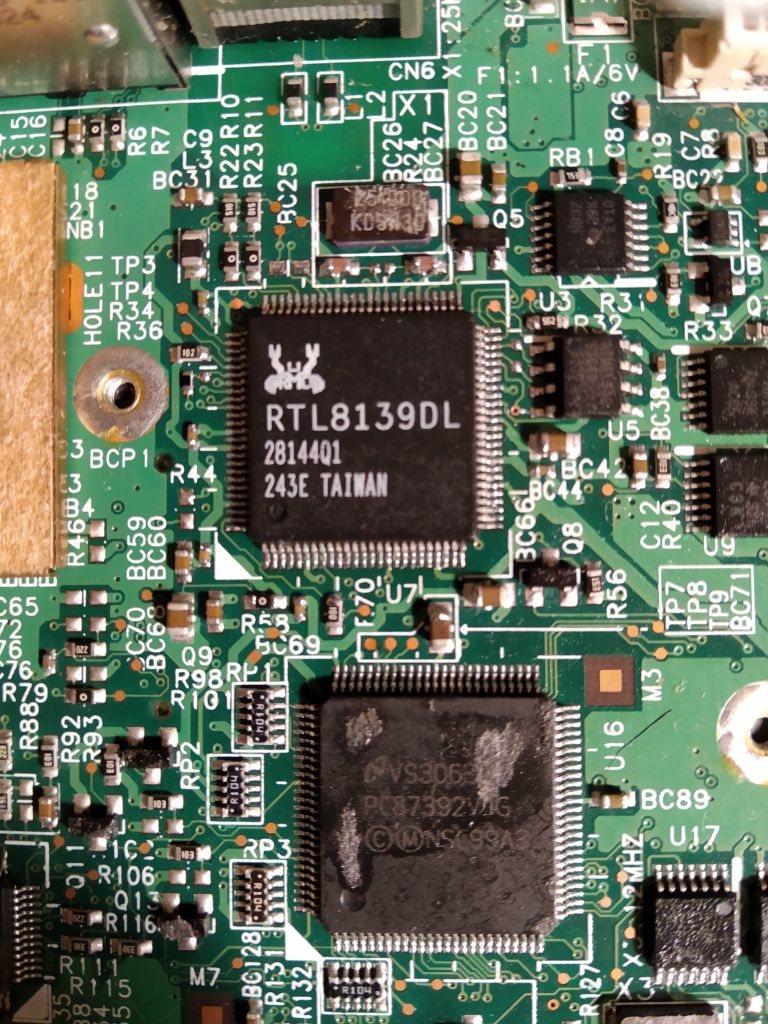 For those interested, here follows the story of this piece of shite impressive artifact of computing history.

I wish I had those skills. I have a Packard Bell Chroma laptop for which new batteries (or even old batteries) are impossible to find. It runs fine and I don't intend to use it outside or something, but I'm curious how it performed back in the day.
Guess I'll never know.

I wish I had those skills. I have a Packard Bell Chroma laptop for which new batteries (or even old batteries) are impossible to find. It runs fine and I don't intend to use it outside or something, but I'm curious how it performed back in the day.
Guess I'll never know.

Thanks 😀
What about recelling the current battery?

What is the hassle? With support for 3.3v AGP on some boards, DDR400, and very fast CPUs, I would think it remains the prime socket for late-Win98 builds.

What is the hassle? With support for 3.3v AGP on some boards, DDR400, and very fast CPUs, I would think it remains the prime socket for late-Win98 builds.

PSU needs replacing as do the mobo caps.

Still doing some repairs on my board. I got a lot of corrosion off of the board, but there's a bit still that needs to be addressed, but it's getting close.

I also have a capacitor that needs to be replaced sometime as it's not in the best shape and the 13MHz crystal broke off and the 14.318MHz isn't too far behind. My board's design is a bit different (has 3 quartz crystals vs 2) than your board.

Also found a burnt trace on the newly acquired EISA SCSI card (DPT 2022) and no bad caps since they are all SMD tantalums and patched that by soldering a 30AWG wire from one end to the other to fix it.

Going to dig deeper by inserting the card and see if it springs to life and do some inspections on the card to make sure other traces weren't affected.

Just set up the memory card for my Atari 2600 UNO cartridge, but I have yet to actually test it in one of my systems. Also received a BASIC cart for my XE GS, so I can determine if the onboard BASIC is borked. The system halts if you press RETURN while in the BASIC environment, but the RETURN key works fine in the keyboard test, or at any other point in its operation.
As far as traditional PCs go, I just glanced at my 486, but I'm still too worn out to bother rearranging the cards, or restoring it from a backup and chucking the drive controller card I bought to try to get a CDROM drive working in it. It apparently eats up too many resources and disables most of my other ISA cards in the slot where it won't flex due to having a cable jutting out of it at a right angle. May have to buy a right angle connector for the card. Clearly, too much effort to deal with.

What about recelling the current battery?

What's that ?
Intriguing !
Does it involve opening it ?

Anybody ever seen laptop LCD damage like this? There are a bunch of these spots with the same snowflake pattern, almost identical. The spots look brown against a white background. This laptop has been sitting on a shelf for 2-3 months, was fine last I checked. The only thing ontop was a 12 inch IBM Thinkpad and I know for a fact I stored more weight on this laptop for longer previously so I doubt these are pressure spots. Whatever this is its in between the different screen layers. Its stored high enough out I can 100 percent rule out chemical damage unless its residual from the last time I had it out and cleaned the screen but I've used that screen cleaner on everything without issue so that doesn't make sense either. 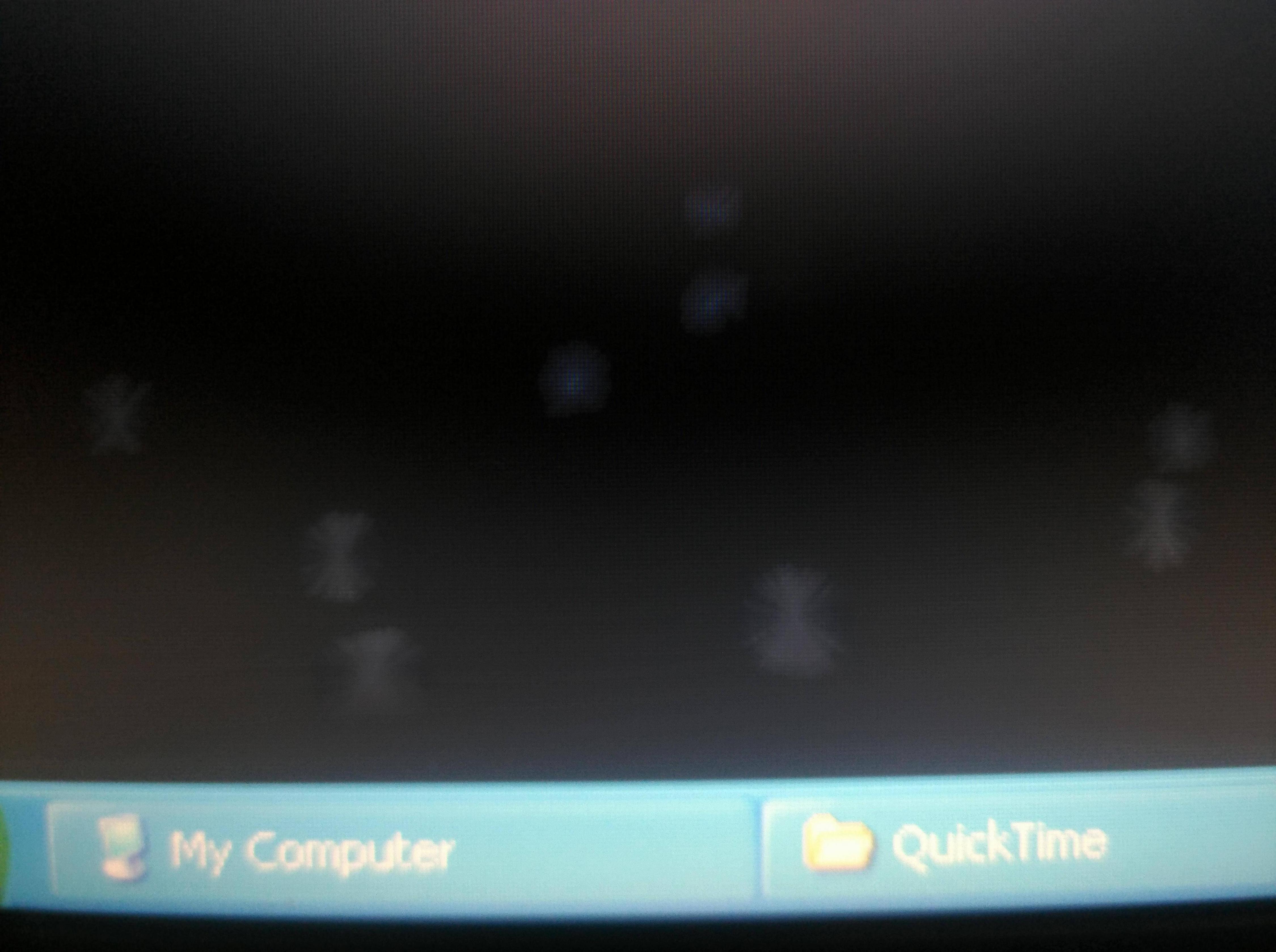 I'm f****** PISSED right now. This was one of my favs, its an early Toshiba gaming laptop with a 1.1GHZ P3 Coppermine and a GF2 Go, and I will never f*cking find another display for this thing and I consider any amount of display damage to qualify a device as unusable, I demand 100 percent perfect displays.

This is not a good week, killed a Athlon XP and then the next day find out a gaming laptop I considered irreplacable has somehow acquired damage. Craps dying faster than I can replace it.

Yes, it's basically replacing the actual battery cells (99% of the time just regular 18650s) inside the battery pack.

While a replacement lcd for a Toshiba model xyz would be pretty hard to find, try opening up the screen assembly and see what model the actual panel is, it'll probably be heaps easier to find a matching or compatible replacement this way.

i feel you man, i was doing some cleaning in my appartment and look what happend to my Thinkpad 760ED after 1 year in storage: 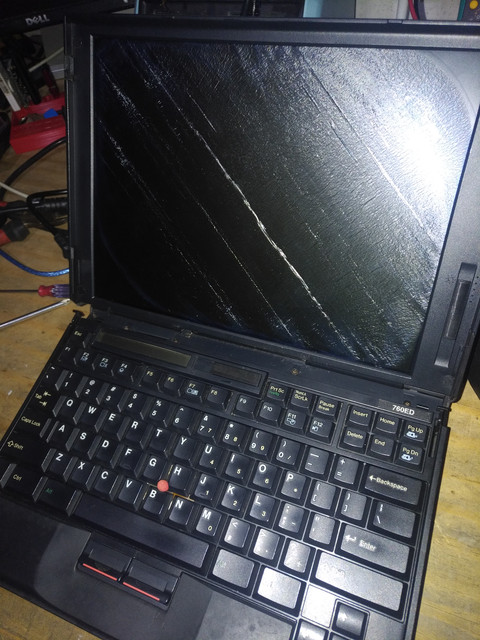 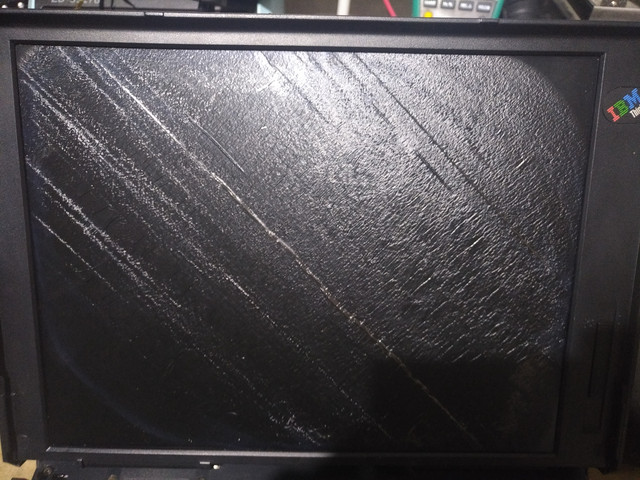 the other laptops are fine, i dont know what was the problem

Got the TNDLPT to work on my 386 DX-33 machine since dummy me forgot to put the TNDLPT TSR files on the hard drive and the HardMPU connected to my MT-32, FB-01, and DB50XG after connecting the MIDI Y splitter to the MIDI in for the MT-32, which is the main unit and the FB-01 along with the DB50XG are daisy chained to the MT-32 (MT-32 MIDI in Y splitter and 2 computers, MIDI thru to the FB-01's MIDI in, MIDI thru from the FB-01 to the DB50XG CHiLL MIDI in).

Next on my list is to get another RCA Y adapter so I can connect the two PCs sound cards to the same AV port on the speakers I have installed and smoke test the EISA SCSI card.