Warlord, are you using SSD in your samples? I'm catching occasional stutters when the game reads smth from HDD. In Build games (Duke, Blood) and in Thief II. Wonder if it's HDD-related. Sample captured in slow-mo:

It's tiny hiccups that happen on some new stuff loading in the game. Really annoying. Some games have them and some don't.

So, I faced the same story with hinges as I had on the first unit. They self-tightened and were close to crack. I disassembled the laptop and brought it to services where they will be cleaned and oiled.

So, hinges are serviced and packed back into laptop. Ready to use.

Well, I was misled! My second unit is also 603. The sticker was removed and the seller called laptop 2805-402. I just checked that it really has gf2 and was okay, but when I tried to flash bios it told me that system is wrong.

So you serviced hinges for the wrong laptop? Congratulations! 😀

So you serviced hinges for the wrong laptop? Congratulations! 😀

But they are the same! 😀

I've faced a strange dilemma... My first 603 unit has Bios Version 1.20X and my second one is Version 1.20. According to the official site:

Version 1.2X 11-27-2001
This BIOS is ONLY for use with Windows XP. Install this BIOS before upgrading to Windows XP. Do not use this BIOS with any other operating system.

I wonder what does it mean? It breaks compatibility with Win 98 or its some kind of misunderstanding here? Because both machines work with Win 98 flawesly.

Why do we need to switch from ECP to Bi-Direct? Tried to do without it and it was fine both in windows and dos.

I recommended that becasue with Bi directional you can manually change the hardware resources of the printer port to not use an IRQ under windows. Whatever reason even if I disabled the IRQ of the printerport in BIOS windows wants to automatically install it and add a driver and assign a IRQ. I suppose it's a moot point if I disable the printer port in windows anyways.

Warlord, are you using SSD in your samples? I'm catching occasional stutters when the game reads smth from HDD. In Build games (Duke, Blood) and in Thief II. Wonder if it's HDD-related. Sample captured in slow-mo:

It's tiny hiccups that happen on some new stuff loading in the game. Really annoying. Some games have them and some don't.

I had stutters, and replacing the HDD with a SSD solved the stutters. No longer have stutters with SSD. It's very smooth even during bench marking.

The actual problem with the hinges are that whatever grease they used in the factory dries up and thats what causes the hinges to freeze up and break.

I used Lucas Gun Oil instead of grease and both my laptops are still fine. Perhaps theres a better solution, but at least I do not have to worry about the grease drying up and seizing the hinges since this is the actual issue.

The only issue I found with bios is some later version they adjust the temperature of the sensor for when the fan kicks on. They change it in a bad way causing the fan to stay on almost all of the time it seemed like. Any bios version before that is fine. I tested them all.

This is one of the reasons its the Ultimate retro laptop. I used DOOM as a benchmark becasue speedsys gives inaccurate results favoring the PIII FPU over raw horsepower.
Doom benchmark at Speed step + 1x Throttle L1 enable l2 disable

I did some testing of speedstep and CPUspd on this laptop.

Speed step works the same on all versions of the laptop as it drops all cpus to 700mhz . Speedstep ver 1 It's weird. Best I can explain is it actually change the base and the multiplier. Thats why you can go so much slower with speed step on.

The CPU in this laptop has 200 mhz Base clock with a 8.5 Multi. What speed step does is it drops the base clock to 174mhz with a 7X multi. CPUSPD allow you to thottle 700mhz by 8X. So with a 1X throttle the CPU runs at 85 mhz . It also is throttling the bus and the memory throughput is like 44mbs. Disabling the l2 but leaving the l1 enabled it makes the CPU act a lot like a 486 Dx2 66.

The I combine Speed step with south bridge throttling. I can then match the speed of a DX2 66 without disabling the l1 cache. Theres not a lot of granularity outside of this. But it does get you slow enough to play some speed sensitive title. I haven't tested much more than this. 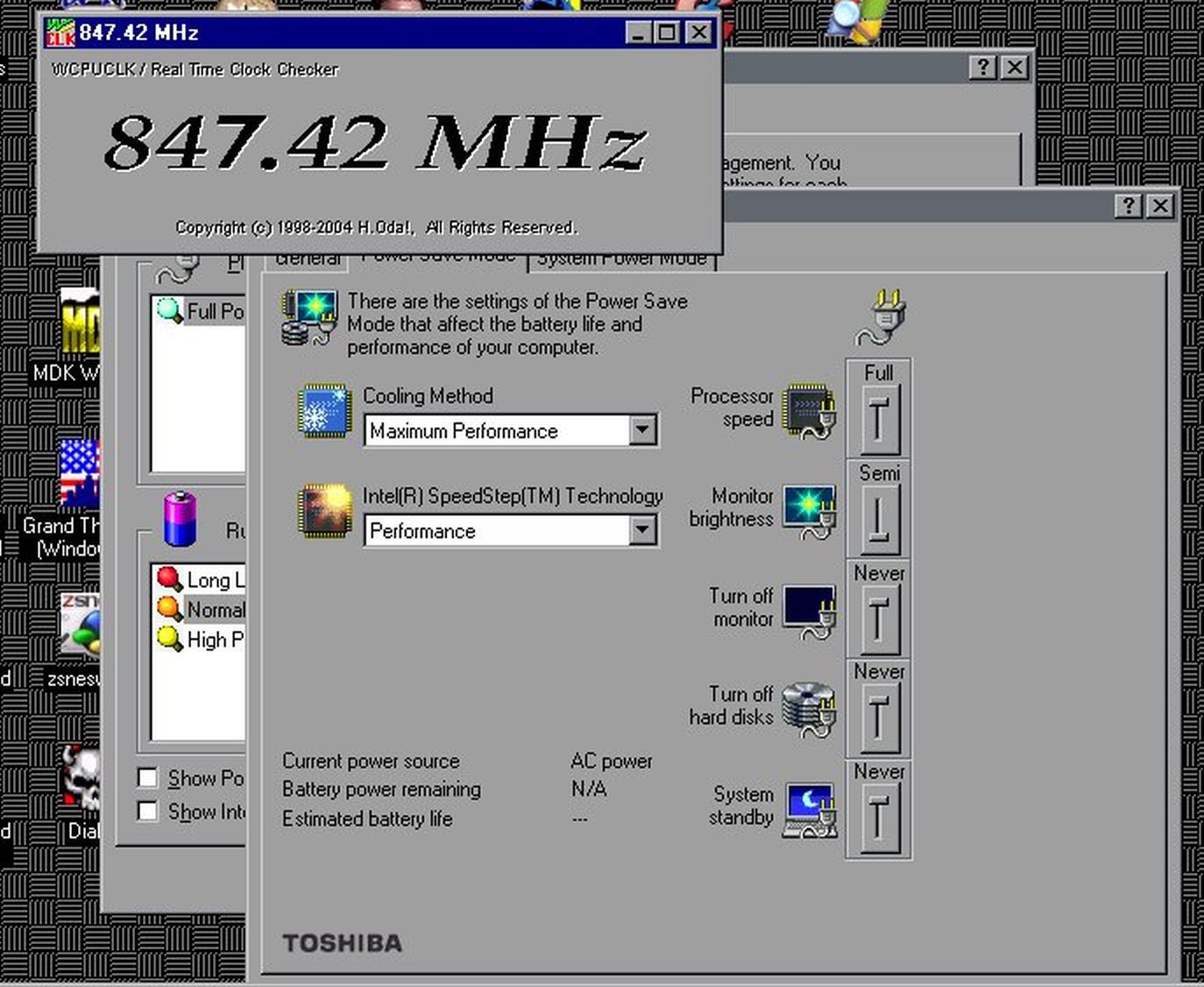 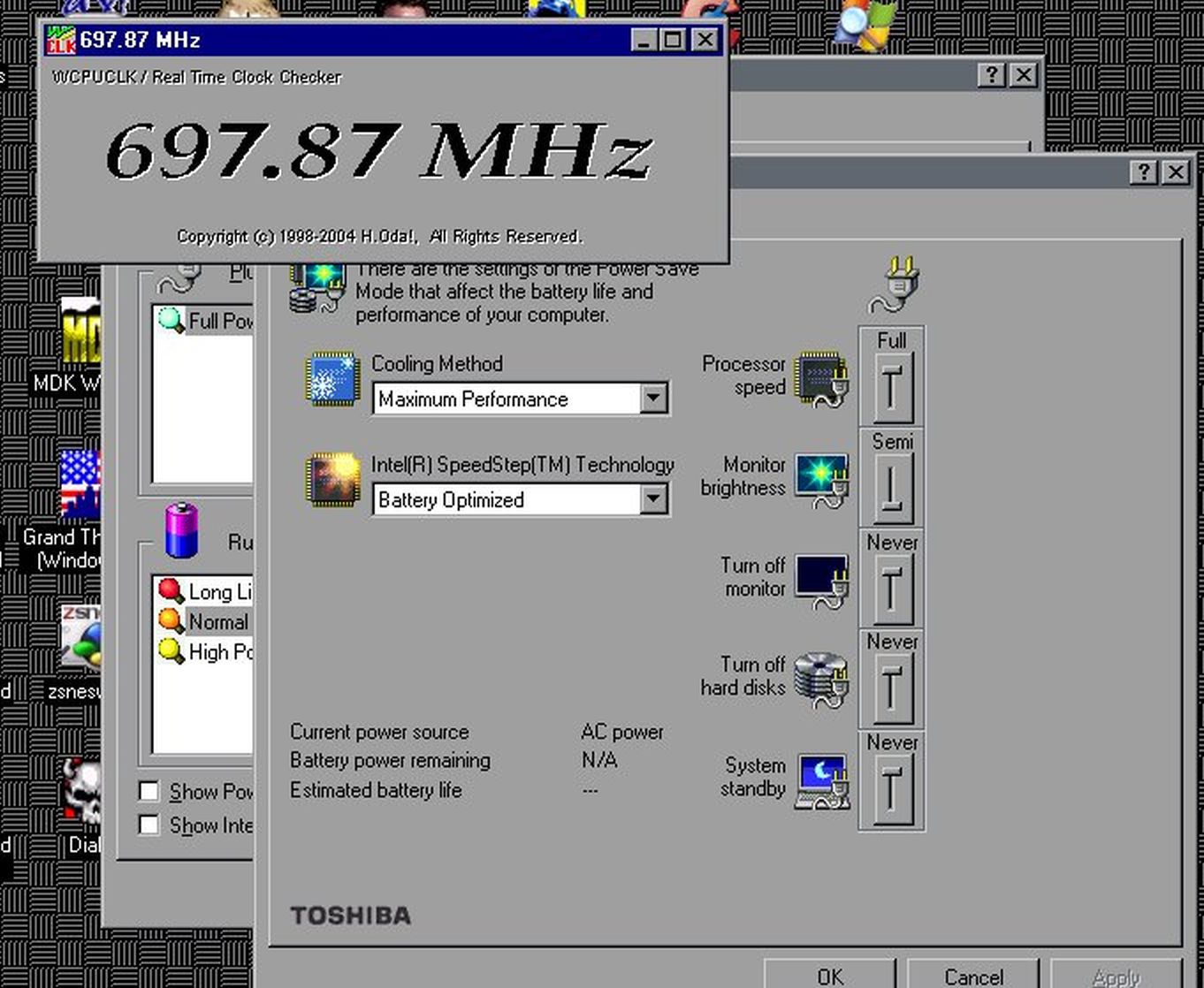 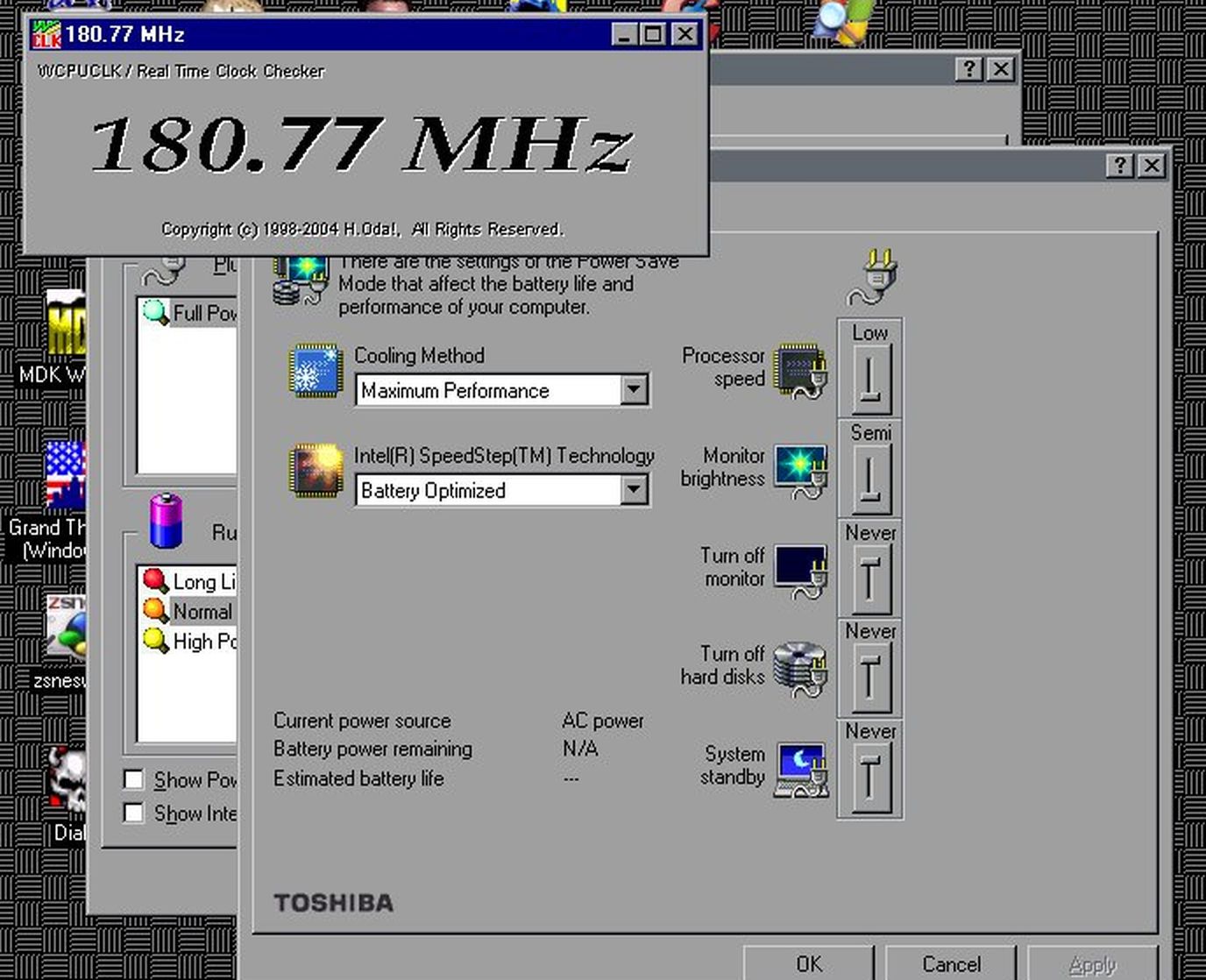 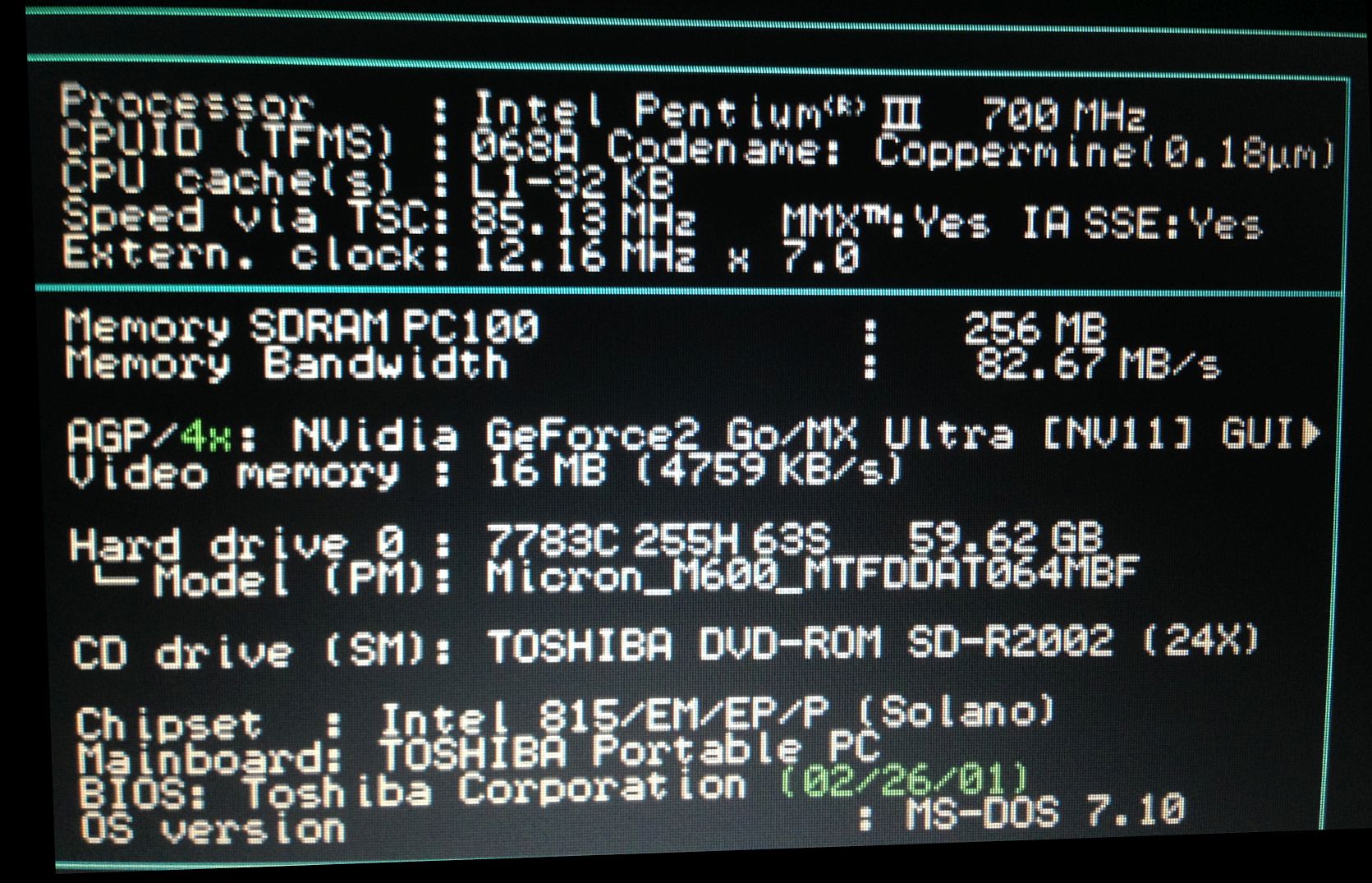 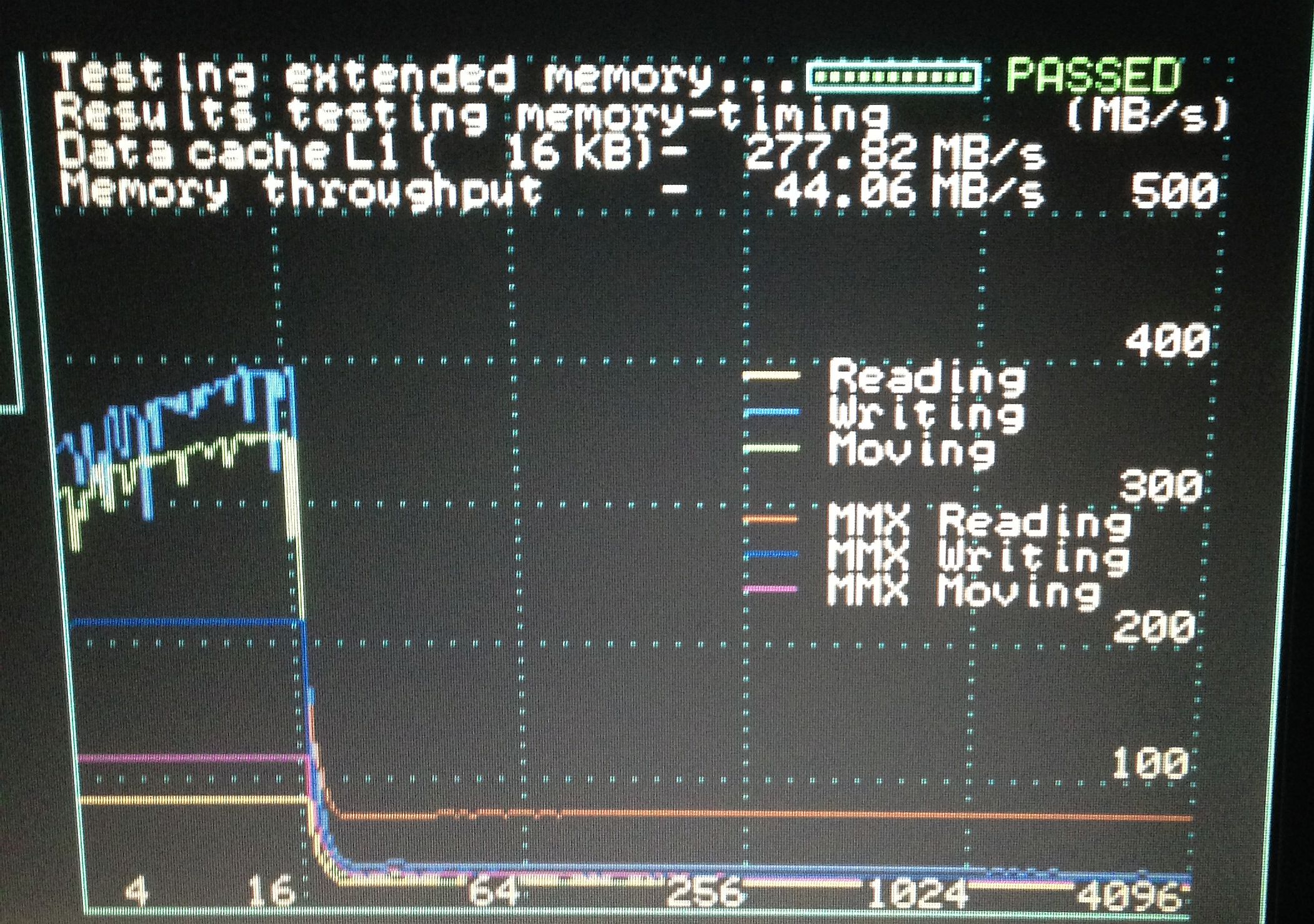 Write through gives you extra granularity in slowing down the CPU. Enabling write through policy + all slow down tricks I mentioned above might net you some where between DX33 and DX66 speeds. It might get you slow enough to play wing commander 1.

Warlord! Something bad happened. I’ve installed 3dmark2001se and it crashes on second test. And first one runs with artifacts and low FPS at the end. The error message is:

Only in 16bit it works properly.

I’ve got another laptop with ati m6 and it worked fine in 32bit.

rest in piece, good thing you have 3 of them. side note 2001se It's a directx 8 benchmark and geforce2 go is only directx 7 with non programmable shader..

Can you please give a try on your sample? 3dmark2001se with default settings. I’ve tried another unit and it’s the same issue.

I’ve checked readme and it requires 32mb of vram. So it may be a source of a problem. But another my laptop with ati m6 and also 16mb of vram runs without an issue. That’s strange.