Hello! I have this lovely Microns BCM DR737 Slot-1 motherboard, and I was wondering if anyone else had encountered a proprietary 44 pin modem port like the one I have where an expansion card would normally go.

Does anyone have any information about it? Or does anyone have a pinout? Whether or not it's just PCI or ISA in some funky format? I can't find nothing about it, not even anything that would plug in there.

Also sorry for the poor pictures! Yes, the pizza was delicious. 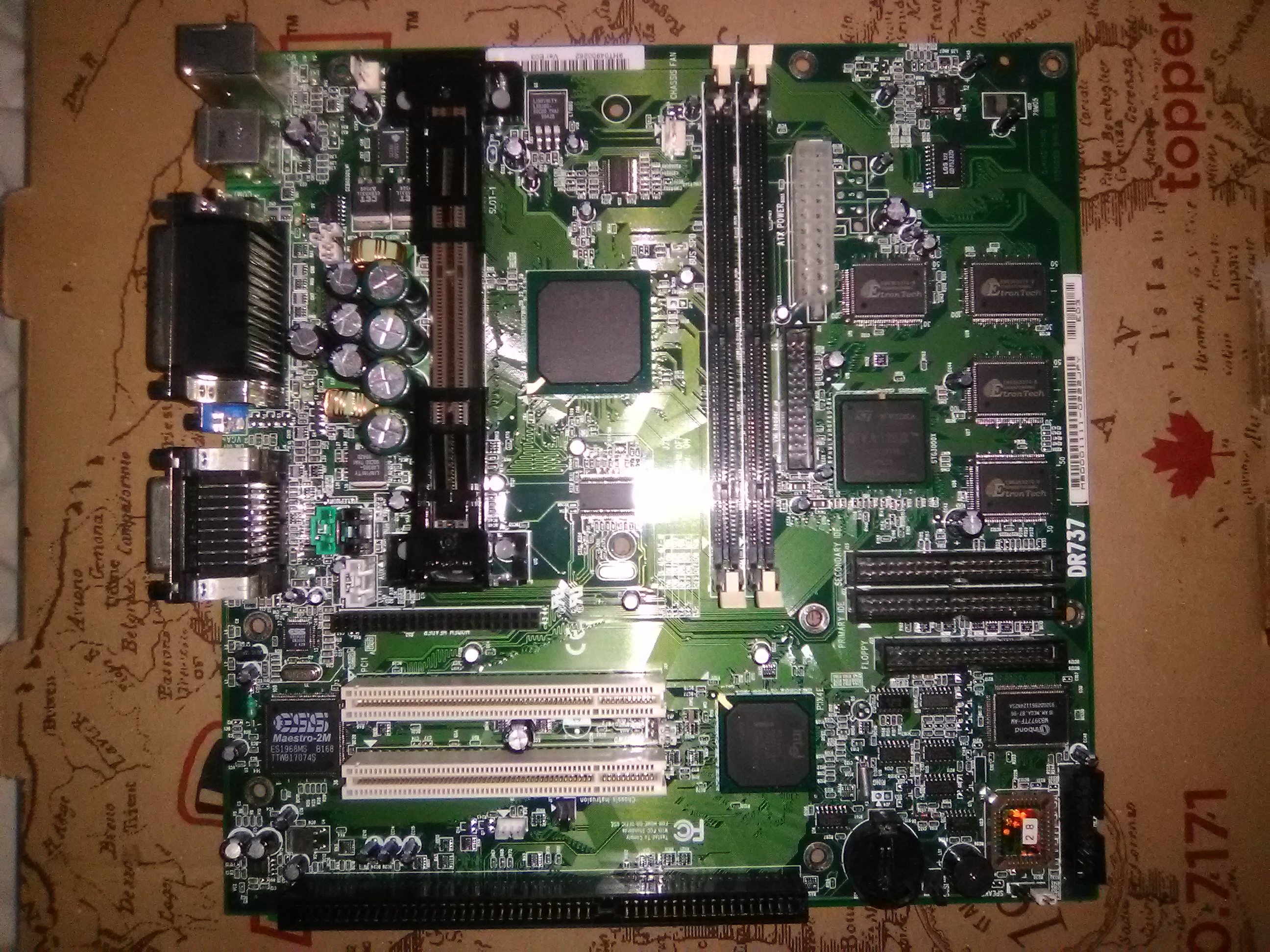 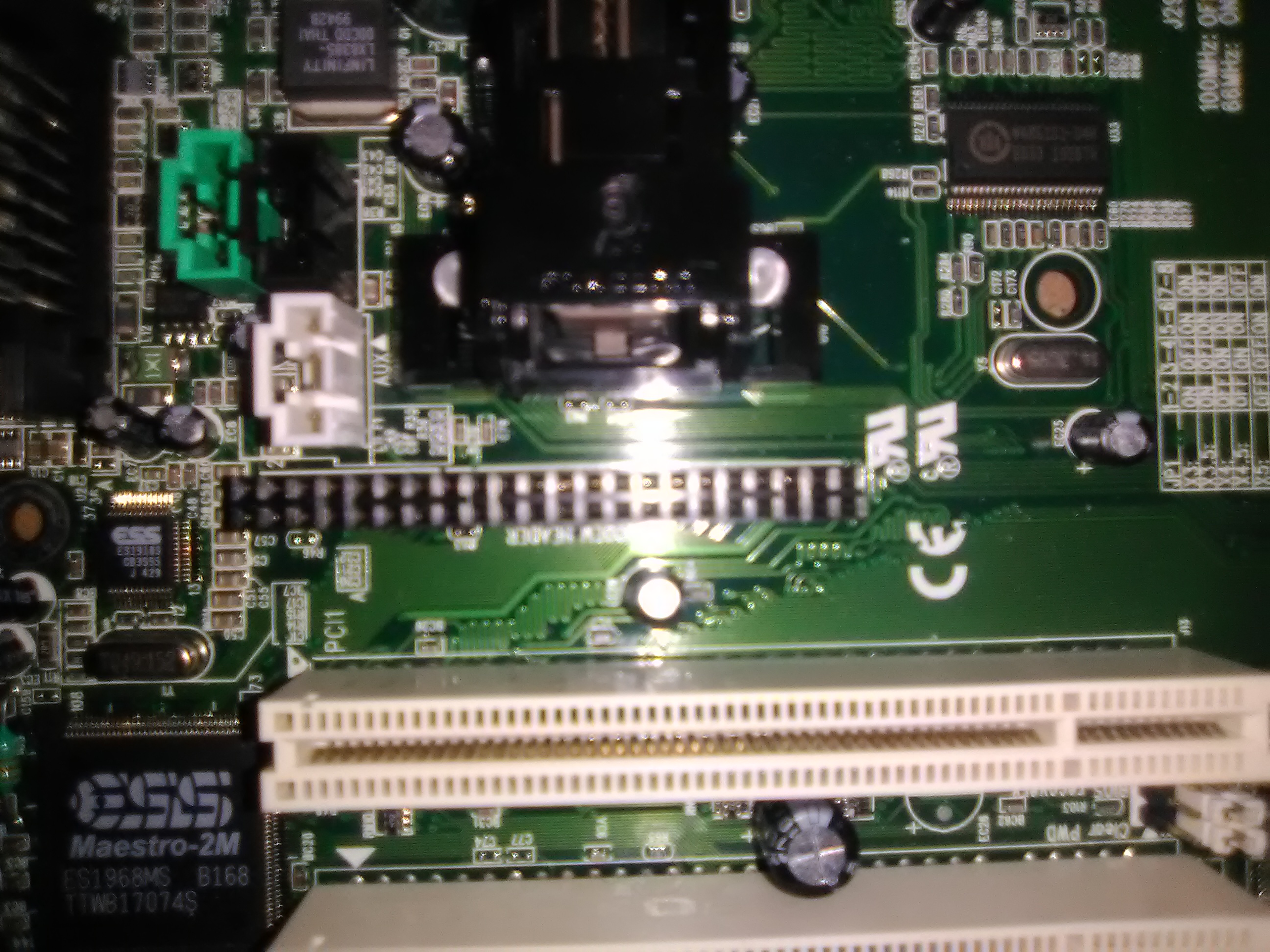 On a side note, the integrated ESS Maestro-2 and nVidia Riva 128ZX are really cool to have onboard!

Is that an Intel 440ZX chipset ? Intel made many of the Micron boards and the DR737 was the IN440ZX OEM board, used in AST and some other computers AFAIK. BCM has the manual but does not mention that header but judging from the traces it goes to the ESS sound chip so is most likely a OEM specific Wavetable header. Side note: have a similar board but with ATI Rage video and Creative SB16 on board....

The AGPset chip does say 443BX, and the Winbond chip does match with what you linked for I/O Chipset.

I took another look at the Maestro-2M on the board and tried to trace the pins to the Modem Header. What I could find are connections from pins 51 to 54, 59 to 62, 72, 73, 104 - 107. I think I was able to follow trace 29 to the bottom of the board and to the same connector... interestingly my chip has 144 pins while the manual for the Maestro-2 I found only has 100.
ftp://ftp.alsa-project.org/pub/manuals/ess/DSMaestro2.pdf
I can't for the life of me find a 2M manual. Either way, if what you're suggesting is true about the wavetable thing, that would be incredible. I kinda think it's just some fancy way for the modem to make its beep boop sounds directly to the same output as the rest of the sound though, but I'd love to be wrong.

\o/ Hopefully you're also a fan of their hawaiian?

Reply 4 of 7, by PC Hoarder Patrol

This looks like a proprietary implementation of what later became standardized as AMR, which had 46 pins, most of which related to AC97 data, although a handful also moved analog sound.

\o/ Hopefully you're also a fan of their hawaiian?

I'll put it this way, it's pizza so I'll eat it but I wouldn't order it.

Maybe I'm boring but I usually just get a deluxe or pepperoni.

Thank you so much for that!!

It seems like some of the pins are GPIO pins which are also for the ES2820, which seems to be for a 56k modem. The pins seem to be dual purpose though!

This looks like a proprietary implementation of what later became standardized as AMR, which had 46 pins, most of which related to AC97 data, although a handful also moved analog sound.

Interesting! I took a look, and it has a lot to do with digital to analog audio conversion it seems. At least AMR doesn't seem to handle wavetabley stuff though. I was kinda hoping for more of just a re-wired PCI/ISA lines situation as I thought maybe this port could possibly be used for a project I've been kind of dreaming of. (Disabling FM in the Maestro via software and adding true OPL3 to the proprietary connector without taking up the motherboard's dedicated ISA slot.) I'm very much a hardware noob however and I'm not even sure how to begin reverse engineering a connector. Maybe it's time to learn!

I'll put it this way, it's pizza so I'll eat it but I wouldn't order it.

Maybe I'm boring but I usually just get a deluxe or pepperoni.

Nothing boring about a deluxe! Especially with their house dip. 😁