Happy to hear it works better.😃👍

The CPU speed on those old processors is not fixed. It is determined by the front side bus (or FSB: the interface between CPU and northbridge/mainboard) and the multiplier.
-Your FSB is set to run at 75MHz.
-Your mainboard is configured to tell this CPU to run at 3.5 times the speed of the FSB.
This will result in your CPU running at 262MHz (75x3.5). The BIOS reports this as 266MHz.
This is a slight overclock but usually it should not cause any issues.

Does this make things clearer?

did you figure out your cooling solution?

these old cpus as others said run at the speed the mobo tells it to. unless it doesn't support the set multiplier.

As others and I have said you appear to be running at 75 x3.5 which is overclocked but no problem as it's probably within the capability of the chip if you keep it cool. chances are 262mhz will be stable. I'd leave it as is. but do some benchmarks to be sure. those chips usually top out at 270-300mhz

2.8v as others have said is the correct voltage for the chip you sent a picture for.

you need to change jumper settings every time you swap your cpus. do not forget. you got lucky.

THANK GOD
it was this chinese junk CF card along with this CF to IDE thing: 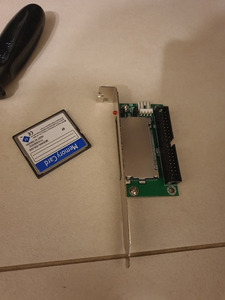 I bought this from Amazon:

And it works and everything recognize on post now!

All the storage that was on the CF card got deleted! now it asks me to format it. huh
So good I have backup.

Just go sata and be done with it.

Get a promise tx4 sata II

Hi, could you please take a good picture of your motherboard without anything hiding it from the camera (expansion cards, cables, etc) ?

I'd like to add the picture to the ultimateretro page https://www.ultimateretro.net/en/motherboards/5042

Let me know if you need photos of TX3 as well.

Well apparently a picture from you have been added a while ago https://www.ultimateretro.net/en/motherboards/5041

However if you can make a better one (and one for the back of it), then please do it 😀