Thunderbirds and DDR motherboards are OK.

We will have more competitions in the future. We will try to have better more thought through hardware rules in future competitions.

Maybe you can give us some input.
Me and my friends are discussing rules for a possible upcoming "1998" competition.

I was thinking something like this:
The theme is #Quake2toTheMax. The guy/gal that gets the highest fps score wins.

Max Pentium II 504mhz
Or K6-2 unlimited OC. This time it is k6-2. Not 3 or any of the + models.
I was thinking unlimited OC on the AMD cpu just give it a fighting chance with the pentium II:s K6-2 has 3dnow.

The hard part is graphic card rules. 3DFX Voodoo2 SLI or not? Or should we just skip the voodoo:s?

What do you guys think?

For quake2 it has to be Voodoo2 or Riva TNT. This game sold tons of Voodoos.
Are Mendocino Celerons allowed? They are more affordabale and clockable, since they are not limited by L2 cache chips.

Are Mendocino Celerons allowed? They are more affordabale and clockable, since they are not limited by L2 cache chips.

Well. We havent really decided anything yet. But those celerons would be allowed if we decide to go with the Pentium II/K6-2 theme

How about banning the voodoo2 line of cards? 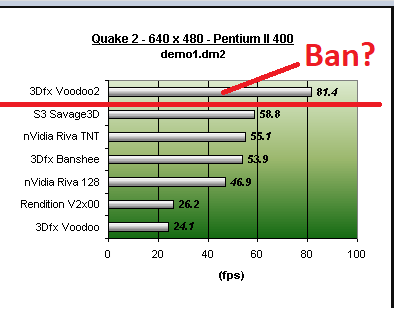 It would be a much fairer competition since the voodoo2 is way faster then its competition.

I'd like to see Windows NT 4.0 allowed in one of these contests.

Or you could force a Voodoo2 into 800x600. The framerates are relatively equalized, and you keep the number of possible participants high.

You could also do two categories: with Voodoo2 and without.

I love this contest!

cfg tweaking and building dlls or Q3 clients is alien to me, but I copied some stuff together and can bring some serious hardware from that era 😎
I think this is a really cool idea you came up with @necrodude - I only wished that the Geforce 256 DDR was excluded, because its release was 2000-02 and it would have been a ton more exciting regarding video cards.

Therefore I find the idea to exclude Voodoo 2 (/SLI) from a Q2 contest really good, because it opens up the possibility for more diverse builds.

I hope I can submit a result for Q3 by tomorrow 😀

OK, I realize again that I'm a Voodoo agnostic. Was finishing highschool and starting college back then, had other things to do, people to meet, barrels to drink.
Considered getting a set as a curiosity ten years ago, but they already were mid two digits. (only got a token single ct... 8 MB) Of course I could buy a house today, but still...
Are the SLI V2s supposed to beat a GF256 DDR? Really? They're what, two years older? Back then, that was eons...

Although it is not clear, the GeForce 256 comment is in reference to the Quake III contest ('Tweakstone' is suggesting it should have been banned). For the next contest, which is Quake 2, 'Tweakstone' agrees with the idea the Voodoo2 should be banned. The GeForce 256 and Voodoo2 were the tops of their generation.

Yes, of course a V2 SLI cannot compete with a GeForce 256, let alone the DDR Version.

Voodoo 2 SLI was extremly powerful a its time, as it essentially offered next-Gen Performance back then and sometimes even reached Voodoo 3 3000 Performance (UT99 for example).

But GeForce 256 ist another Generation more and a completely different Level of Performance.

Typing english on a German Smartphone is Not fun. 😒

I'd like to see Windows NT 4.0 allowed in one of these contests.

If theres no SMP involved I dont see any problems with NT based OS:s

Typing english on a German Smartphone is Not fun. 😒

The keyboard on my LG lets me flip between languages... which it usually does on me accidentally... typing like "I'm at the store shall I pick up a bag of flugzeugabwehrkanone flour? dammit."

So how do you feel about the idea about the cpu limitations? Max Pentium II at 504 mhz, and max K6-2 with unlimited OC.

I figured since the k6-2 is way slower then the Pentium II, it would be more fair to allow unlimited OC on the k6-2.

I figured since the k6-2 is way slower then the Pentium II, it would be more fair to allow unlimited OC on the k6-2.
Even with the 3dnow patch installed the Pentium II 450 wins over a k6-2

So after quite a lot of testing I have concluded that once you hit a certain GPU level and certain settings in the game the GPU type just will not matter anymore.
Q3A seems to be 100% (or very near) CPU/mem speed limited.
I noticed this when I was playing around with my stack of GF2 MX's (they manage 100MHz AGP bus).
Overclocking them gave ZERO extra performance.
And chucking in a GF2-U for the lols showed the same thing.

Now its certainly possible that you still need a GeForce class graphics card and I didn't test with any TNT era cards.

But it seems like this is a test of finding a combination of bus-speeds, memory timings, drivers and what sound card that steals the least amount of performance =)

Anyways I'm throwing down this gauntlet:

The hardware used is in the comment.
No HW secrets from me.
And its far from fully tweaked.
And yea, the CPU-z version I'm using wont show the actual CPU frequency (notised after uploading the vid) but its legit.