Hey all. I know there's been various topics on power supplies for old computers but the links in them are broken or the threads are just very old.

So yeah, I have a bunch of PC's I've been collecting over the last couple of years and I'm FINALLY getting round to refurbing them. Nearly all need new power supplies.

Without spending mega money and buying new modular PSU's and then having to source FDD power cables and whatnot, does anyone know of any new PSU's out there (UK) that fit the bill?
All I need is a couple of molex, ATX20 pin and a couple of FDD power connectors.

I have been keeping my eye on ebay but as you all know, anything with the word 'retro' or 'vintage' in the listing title which is nearly everything up to just 10 -15 years ago now is extortionately expensive, and would be buying unknown parts as well.

I’ve this week ordered a PSU that I assume is New Old Stock as opposed to newly manufactured.

Thanks for the heads up, I just bought the last one on ebay I think!

Still could use 4 more unfortunatley 🙁

Because they either have none or are not working.

Because they either have none or are not working.

Oh, really? OK. That's pretty rare with my systems, but well, it happens.

In general, I hate the idea of using ATX units for AT systems as they don't have the definite "mains" power switch any more. It's just nice about the old ones that off really means off.

But, if it can't be helped: Well, look around on ebay which ATX AT adaptors cost the least including shipping if you order ten of them.
Or, since you do have the cables and plugs from the old ones, feel free to cut them off and transplant them to the new units, using solder and shrink tubes - the electrons won't mind, if asked politely.

Then, there's a bloody lot of bollocks going around about PSU requirements.
Some few systems or sound cards will not work without the -5V rail, but rarely, afaik. There are threads for that.

As long as you have one working PSU and the system boots, get some "mains power meter" to plug between outlet and the PSU:

You'll notice that many 90s systems make do with 50 Watts or so under full load like some benchmark. If not yet known, realize that 50 W at 5 V are 10 Ampère.
Meaning any PSU from back then will be able to provide double that on 5 V alone, as virtually all of them have 20 A there.
Consider there's a xx % loss on the PSU itself and then some of that power usage is not 5 V. So as long as that mains wattage divided by five roughly equals the PSU's 5 V rating, you're likely within a safe margin.

By mere amps ratings, almost any shitty old ATX unit will do.

To have some trust in them, AFAIK, Fortron/source (FSP/FSC), Seasonic, Emacs, Enermax and Enlight are brands with some reputation. The modern retail brands like BeQuiet, Corsair, Thermaltake, the lot are usually just those rebranded and repriced. Also, major OEMs like DELL or HP should not be in the habit of installing unreliable garbage, in their own interest, with on-site warranty deals.

In my experience, there are still a lot of AT PSUs to be had, just don't wait for people to know what they are and declare them correctly on line. You'll have to apply bio-optical filtering on ebay - look for grey units, the twin motherboard plugs, a fat black mains switch cable. They usually have the old switch attached or generic plugs that will fit the one on your AT case.
This is already deluxe since it's (ostensibly) from an Acer, 250 Watts, TÜV approved, was not made in China and is only partially covered in rust:
https://www.ebay.co.uk/itm/374009132682
With AT ones, a temp controlled fan is a good sign, as those were rare.

If you get a first PSU and then stick to fixing the first system, chances are you'll find the second by the time you're done. 😉

Of course, any PSU you get, dry test it, give it something to do like a bunch of HDDs you don't care about or halogen lamps or whatever, test the voltages and that they don't go up in smoke.

One hint, some older systems will get by with a pico PSU plus adapter, which may be cheaper and fanless.

I've got a few nice old cases and a whole load of motherboards, cpu, cards etc which I obtained separately which is why I haven't got any PSU's. Also I have an old Packard Bell and a Time PC which both have dead PSU's (I've tested).
So yeah, desperately short on PSU's at the moment!

Would be awesome if I could get new PSU's but the cost just doesn't justify it when I need so many!

Well, the one referred to above, NOS can't really hurt but 20 quid is already pushing it, IMHO.

Why would you get a new PSU all the way from China for obsolete systems, while there are tons of old ones lying around? You may as well stack some old tires and bank notes in the yard and set them on fire, for the same effect, if more convenient.

I've had so many shit experiences with stuff bought off eBay 😒

A certain learning process with ebay sourcing is part of the fun.
Commercial BIN offers should offer a return policy and even p2p there are some options with the help of paypal and ebay, they just don't advertise them too loudly.

When in doubt, look at the seller's other items, including past sales, and their rating, of course, you'll develop a feeling for them. Generally avoid any kind of fuckwits, morons, twits, attitude challenged individuals and outright c-words out there - no matter the price, it's not worth it, the obnoxious communication risk alone.

It's generally a good first sign if with a PSU, they've somehow accomplished to make a sharp photo of the nameplate.

Since they can be tested to some practical extend with simple household items like a multimeter, PSU to me seem some of the less problematic retro items to acquire.
Everything gets routinely mislabeled, RAM is incompatible, cards have ESD damage, HDD and CD drives are a complete mess and all over the place, no matter the description.

i just buy cheaply-made used power supplies in the 300-350w range off ebay for less than $20 shipped. i have athlon systems which require both a high 5v rail and a -5 rail for an isa card so newer units are unsuitable. also, i need at least 4 molex and 2 floppy connectors and detest using splitters. when a psu fails i just grab another one from the pile.

cheaply-made is a relative term. compared to some of the post p4 units with a high "rated" 12v rail that i've suffered, these cheap p2/p3 era supplies are premium.

i just snagged this NOS 350w unit today. i don't know how crappy the psu is or is not, but the marketing has me stoked! does anyone else have a power supply that shoots lightning bolts?

It kinda depends on which 90s PC exactly 😀. Few days ago I cobbled one 486, nothing special, AMD 486DX4-100, 16 MB ram, gotek drive, soundcard with dreamblaster, CF for HDD, DVD-RW (turned out CD-RW I had worked, but didn't actually, motherboard doesn't recognize it, but I'd swear it worked when I first tried it...). Power consumption at the wall was 30W, regardless of CPU load. 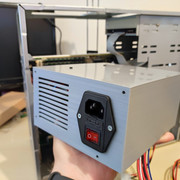 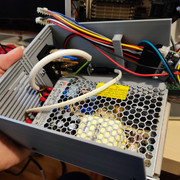 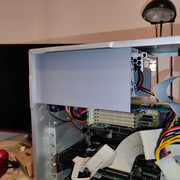 PicoPSU can give 8A on 5V rail so this should be plenty for 486 type computer. For Pentium builds I use "normal" PSUs, although I haven't tried measuring how much they use from wall 🤔.

Apart from the very last ones like the AMD Athlon Platform or maybe a dual Pentium III, it doesn't matter that much which 90s PC you're talking about.
(meaning a basic system, not maxed out with drives, cards, other stuff)
The 8/1999 Argon Athlon 650 has a whopping 54 Watts TDP, the 9/1999 Katmai Pentium III 600 34.5 W.
Think the Vanilla Pentium was around 15.

And that already factored in some ancient tech that would actually use a bit of physical force like certain mechanical drives.

So, apart from freak incompatibilities, weird OEM things and exotic formats, I don't think there is any standard sized, retail traded 250W+ ATX PSU out there that will no power any 90s PC, probably including the early Athlons.
For AT, you'll need that adapter, of course, and there's the -5V issue.

If not original ones, I actually like the idea of using pico PSUs for anything 486 or earlier. Allows for smaller systems and if you're going to buy one, they're pretty cheap.
I wonder if they are even a bit more efficient than some modern 80+ piece running at 20 % load, since those ratings are for around 50 %.

Efficiency concerns aside, simple 12V 50 W in-line (brick) adapters are dirt cheap (~10 € new) and probably to be found at any flea market, etc. anyway. How long does one actually use those boxes?

this guy is working out pretty well so far. it's got some heavyweight heatsinks so that's a good start. wire guage is better than average plus it's got 7 molex (3/3/1) & 2 floppy connectors. it even has a single molex connector on its own wire group for the video card (same arrangement with a single sata connector too). my only complaint is that the floppy wire gauge is pretty typical which is a big contrast to the other wires...my radeon 9800 uses a floppy connector instead of molex so it matters more than is usual.

cpu heatsink clearance has always been especially tight on my kt133a board, but with the secondary psu cooling fan my heatsink thumb bracket is practically sticking thru the fan grille. this is even after installing the psu with the case upside down to get the most clearance from the mounting holes.

I am a fan of Seasonic Silent ATX PSUs: https://seasonic.com/prime-fanless-px# and use those on a number of my retro rigs (a Turbo XT clone and a 486). Love the silence <3

To get them to work on an AT case, I use an active ATX to AT adapter that converts the ATX power button to an AT one, and adds -12V and -5V lines.