Imperium Galactica, after 2 years "playing" 😀
// Thanks to DosBox which makes it possible, since my old Pentium3 died.

I'm not really grokking the point of this thread if you guys don't record an opinion about the game too?

The Elder Scrolls V: Skyrim – Dragonborn. The main quest was short and dull but there were a decent amount of interesting side quests to make up for it. The ability to ride dragons was janky and simplistic, it could have just been left out. I plan to play the new Skyrim SE in the future but I think I’ll skip this DLC’s new area when I do.

Took almost 40 real days. I really liked having all the canonical Ultima characters to converse with (if you're an Ultima fan, you know what I mean). It definitely felt like a true part of the Ultima series despite the vastly different gameplay. It seemed much tougher than the first Underworld, especially the Ethereal Void parts. It was really rewarding to get back to the castle and talk with all the NPCs after clearing each new world, really made you feel a part of the world.

My plan is to take on Ultima 7 Serpent Isle next. I know that's a huge game, so if I do take it on, it'll probably take something like 100 real days to complete! 😲

Icing on the cake: this is the first game I've completed on my 486.

Gone Home (free for the weekend, DRM free) - I quite enjoyed it. Short, but does environmental exploration well and the "flow" of the house is good.

Edit: In response to badmojo's comment above, I loved this game back in the day but can't have stuck with it for very long because I only remember the first level.

It's a tough game. It takes you literally the whole game to master the timing of the controls and pull off certain combinations. There's no too much retracing of steps but a little, which can be frustrating. I found that I had to take a break for a few days if I'd gotten particularly far into a level before dying miserably and having to restart. Saying that, I would play for 5 hours or more at a time. The only other games I've played for that long are F1GP, WoW and Doom.

Dishonored. (Well, actually, I played it on console, but I got it for free a while ago, so here it is.)

I quite like it. It reminds me most of a mix between Thief (choices, stealth, and kleptomania) and Arkham Asylum (movement, /that/ Unreal Engine 3 lighting) with a dash of Deus Ex. (upgradeable abilities and choice)

Titan Quest Anniversary with Conqueror, I reached 65 level and I don`t have even resistances but I have very high damage and I killed even bosses in no time, I maked pure offensive character with much damage as I can reach 😊

And this is screenshot of my Conqueror:

Deus Ex: Human Revolution, Director's Cut. Old men are the future. Liked it a lot. Also very well optimized; it ran great on 1080p max with my borderline decrepit HW (E6850/5 GB DDR2/750ti) - I only dropped it to 720p because of HUD scaling.

Just finished Legend of Grimrock I. Stats: took me 24 days and 20 hrs of gameplay. The end battle was actually really good, very challenging and stressful though. I played on Easy, and it was just right for me. The boss is unlike any other I've faced. Quite unique. 😀 If you're curious, YouTube it. Needless to say, there were appropriate levels of tension and terror. Reminded me a little of a creepy FPS boss.
No screenshots this time, I wasn't prepared with my camera and wasn't sure how to screenshot a fullscreen Win32 game without something like Fraps running in the background (which I don't have on this machine).

Doom II
Difficulty: Hurt me plenty
My first ever playthrough. Fantastic game and I understand everyone who considers D2 as a genre milestone. 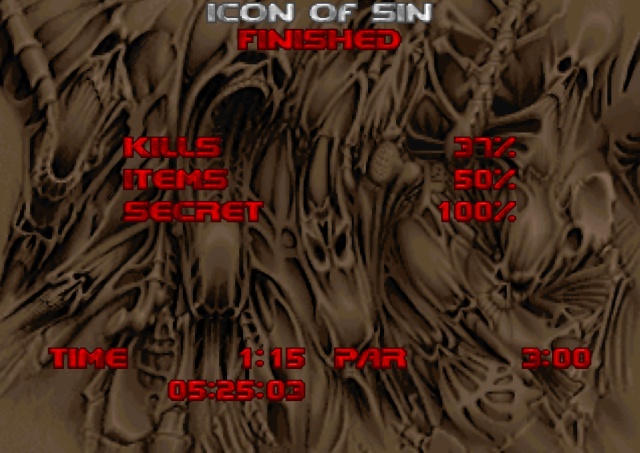 That being said it's just like every other Bethesda game.

Multiple hits required to kill something which is ridiculous. I was happier when I went back to lower level areas and could kill with one or two hits instead of dozens or more.

Game was too easy, started out on highest difficulty level but they eventually changed that mode in a patch and made some changes I didn't agree with so I dropped to Very Hard difficult instead.
I ended the game with 600+ stimpacks, tons of drugs, etc. There shouldn't be this much stuff in the apocalypse.

Too much power armor, think I have like 15-20 power armor just laying around. Guess the intent is to either suit up your companions and/or put power armor at each settlement. I found having to constantly repair power armor on companions a PITA so even if I did have them wear it I usually didn't bother to repair it.

Speaking of power armor towards the end of the game I could actually carry more items without the power armor than with it. Don't know how that works out.....

New areas were constantly being discovered all the way to the end so that was good.

Inventory management is still a PITA. They should probably just get rid of weight limits altogether or something. Spent way too much time going back and forth an scrapping. Think ideally they should have just made it so that when you setup your drone to scan for items they should have the ability to send a robot to gather all non-quest items at a site as well.

Did not do much with building things since I'm not a sims fan and there didn't seem to be much of a point to it. I did the bare minimum when required. Beds? Throw a bunch of sleeping bags down, Water? Plop it down where needed an run power, etc etc.

Preston Garvery was annoying so in one of the expansions you have the opportunity to piss him off so that was nice.

The endings between the different factions I didn't agree with I finally ending up siding with a faction just because the game seemed to want you to go for the other faction and I wanted to do something different. There could have been a bit more complexity in the endings.

A a couple of scarecrows and camps are left as well as about a bajillion loot locations but the game is way too repetitve so I'm done.