The year is 1990 and you still have a PC/XT and can't upgrade. Which games are you playing?

Funny, this scenario was exactly what I lived in 1990. But, I had a 10 Mhz Turbo XT, so I was a little above your specs. I even had a VGA adapter, and an original Sound Blaster in mine. So it was a tad above your specs.

Still on those specs I played a ton of:

I vaguely recall playing Test Drive II: The Dual as well. But, could be wrong on that one.

A 386 is the slowest PC I've played games on, but I think everything we played in the early 90's would've run on a PC/XT.
Bubble Bobble, Grand Prix Circuit, Alley Cat, Commander Keen 1-3, Jumpman Lives, and later Civilization and Red Baron.
Today I would add my favorite 1980's PC game Sword of the Samurai at the top of the list.

A 386 is the slowest PC I've played games on, but I think everything we played in the early 90's would've run on a PC/XT.

Funny, because back then, a 386 was about the fastest I've played games on (to me, a 386 was mighty)..
It was my father's business machine and I was allowd to play a few games on it, which otherwise wouldn't have run on my trusty ol' 286.
Like that MiG-29 flight simulator. It was a good sim (fascinating AI, two simulation modes - easy and realistic) and also had a Genesis port.
But sadly, it was unplayable slow on a 286-12. Perhaps it would have ran fine on a 25MHz machine, though..
Otherwise, there were also XT compatible games that I played on his machine (initally I had to play them from floppy, to not mess up any data).
EGA Trek or Stargoose, for example. Or several Win3.x games. I think games like Graditor, GNUChess and SkyFree would also run in Win 3.0 real-mode.
Not sure about CGA+Win3.0, though. Most Windows games espected to have at least a 640x400 window for their stuff..

Cool, looks like a sleek and tidy little machine! 😁 It reminds me a bit of the Acorn A5000 I never had.
Supposedly, some models also got an optional 486 card. I've seen a few screenshots with Win3.1 running on Acorn's RiscPCs.. 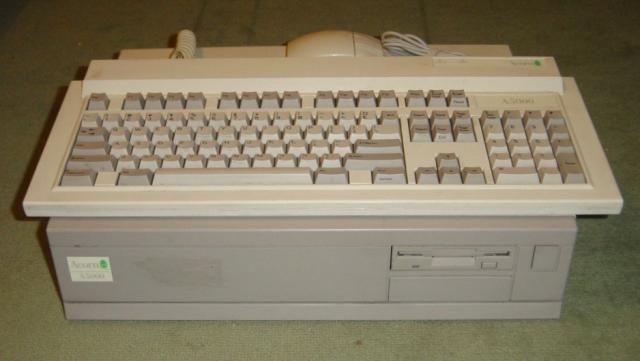 Here's also a picture of my old writing table:

This photo was taken somwhen in the 90s..
As you can see, I also was a Commodore user. Well, kind of.. 😉

Every Sierra EGA SCI and AGI based adventure.

Around that time, I was playing games on an XT-class machine that only supported CGA graphics in games. Necessity being the mother of invention, the limitations of that machine forced me to get creative.

For instance, I eventually figured out how I could get the 16-color editions of the later SCI-based Sierra adventure games (that no longer supported CGA) to run on CGA anyway by copying over the CGA drivers from earlier SCI-based games. It also allowed me to play around with different palettes. For instance King's Quest IV had the same 4-color palette (red, green and yellow with a blue background) that the AGI games used to have, whereas Space Quest IV and Police Quest II used magenta, cyan and white with a black background.

I remember feeling pretty smug about being able to play King's Quest V, Space Quest IV and Police Quest III on hardware that the developers never intended them to be to run on. 😊

But that didn't stop me from longing for the day that I could afford to buy the components to build a modern system for myself. Eventually I earned enough money from a paper route to do exactly that.

Ultima VI: The False Prophet
Wizardry: Bane of the Cosmic Forge
Might & Magic II: Gates to Another World
Champions of Krynn
The Bard's Tale III: Thief of Fate
Knights of the Sky
Links: The Challenge of Golf
Test Drive III: The Passion
Commander Keen
Star Control
Wing Commander (it would be a slideshow, but I'd still play it!)

This would be a slideshow too.

Try DIF-1 Laser Tank and Kosmonaut. DIF-1 is an enjoyable little Battle City-like game by Taiwanese developer Softstar. It requires VGA, but in my testing through PCem, it should be playable on even as a low of a CPU as a 4.77mhz 8088. Kosmonaut will work on EGA, however, and is the precursor to SkyRoads. It's slow on an XT compared to even a 286, but imo it's still playable.

...just put an ET4000 card in my Tandy 1000 RL/HD and checking my software catalog against it.
It will be possible to switchback to tandy-mode if needed, but now I am investigating EGA/VGA stuff.

Be careful with the ET4000 series, though.
It's great for Super VGA titles and demos due to its popularity,
but there are compatibility issues with certain EGA/VGA titles. Like Commander Keen (uses EGA).
For early games, say, a Trident 8900, Paradise or OAK card might be better in terms of overall compatibility.

Tested a bunch of cards, only that ET4K worked and gave me a sharp and clean image. Must be a reason why cloudschatze used that et4k too in his T1000RL/HD.

Tested a bunch of cards, only that ET4K worked and gave me a sharp and clean image. Must be a reason why cloudschatze used that et4k too in his T1000RL/HD.

I understand that, I just felt I should note it. 😃
If you encounter trouble, just try the mode utility (dmode). 🙂

Bye the way, there's also an older ET-4000C.
And there are many AX revisions in general, it seems.
-> Re: Copper Demo

Back to the topic: A friend of mine had an XT machine in 1990/1991, with EGA card and used to play Populous on it. Wasn't super fast, but it worked.