Haven't had one of these in a while, but this one's been bugging me for a while. So, I'm looking for an old game demo I was playing back in ~1997, I will try to detail as much as I remember.

-It was definitely a Windows game, probably Windows 95 only, but I can't really be sure, it may have been a 3.1 title. Release date was anywhere between 1995-1998 (most probably 1997).
-It was a kids game set in a medieval setting (which I believe took place inside a castle) with a point & click interface. I seem to remember some kind of castle hall with pillars and a staircase that led to different rooms. Each room was some kind of "activity".
-I vaguely remember one such activity. You controlled some guy or knight without armor in a "frogger" style minigame of some sort. You had to time the jumps to help him get across. He was jumping on pillars or shields(?).
-There was some kind of voice over explaining the game just before it started and then you controlled that guy. And boy, was he obnoxious... He wouldn't shut up, I remember quite clearly two of the audio cues "Yipeee!!!" and "This is hard work!".
If you fell off you probably got back to the pillar you just fell from.
-As far as the art style goes, I believe it was entirely 2D, no pre-rendered 3D, but I may be remembering wrong. The guy I described above was a 2D sprite for sure and the animation was nice. The game was made of entirely static screens AFAIR and they were in 640x480.
-I don't think the keyboard was used at all, it was all mouse driven.
-When you were about to exit the game, you had to raise the portcullis to leave the castle 😉.

I've spent most of the day trying to find it, but so far I've got nothing, although there are a few switches on Mobygames that might help out. Posting this here in case someone played and remembers it instantly. I think the audio cues are somewhat helpful and I know they were exactly like that.

No, it was a mid to late 90's Windows game.
It may have been inspired off of Dark Castle though, since it was quite a popular game.

Bumping this, I just remembered that it wasn't pits that you were supposed to jump above, but rather a river with floating shields or something. The shields would slowly move on the water and you had to time your jump using the mouse.
Ring any bells?

Thanks for the help, but again, this is a DOS game. It was a 640x480, static screen Windows game.

Bump, still looking for this!

Could it have been Castle of Dr. Brain or one of its sequels?

No, unfortunately. Although, I found a Dr.Brain game about time travel, perhaps the game I'm looking for was part of an educational series as well? With a time travel/medieval theme?

Thanks for suggesting that game, perhaps I should track down educational games with time travel.

I had great success in uncovering a game from my childhood in another thread, so I decided to give this one another go, see if anyone remembers and can perhaps help me out here. I had a go going through Mobygames' lists trying to uncover this one, but I've come almost empty handed. This was definitely a Win3.1 or Win95 game with mostly or entirely static backgrounds at 640x480 and played much like other kid friendly edutainment titles with activities or mini-games to play.
A picture is worth a thousand words supposedly, so here are a few screenshots from games that are in similar vain and look stylistically similar to the game I seek: 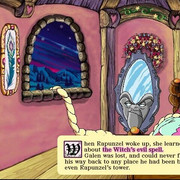 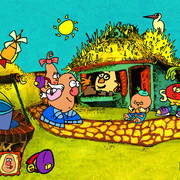 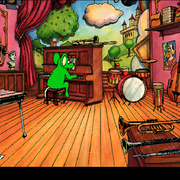 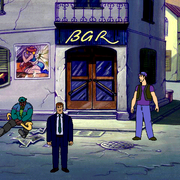 Also, here's a video of a game that seems similar: https://www.youtube.com/watch?v=41BDWi82Xnw

Any suggestions are greatly appreciated, help me find that darn game!

Could it be any of the "Kidstory"stuff? Those were 1994 Packard Bell exclusives.

Good suggestion, but unfortunately these are not it. I could not find any castle setting in those titles and they don't really remind me of anything.
If it helps, what I played was definitely a demo off of a monthly computer magazine and seeing as these were Packard Bell exclusives, I doubt they'd have demos made for them. I'm also pretty sure it did not have borders around the image, whatever interface it had was layered on top of the image or obfuscated in some way.