I found out a couple of days back that the PC version of Psi-Ops: The Mindgate Conspiracy was released as freeware by it's publisher, Midway. It's a really good third person shooter, released in 2004, for the PC, original XBox, and the Playstation 2. 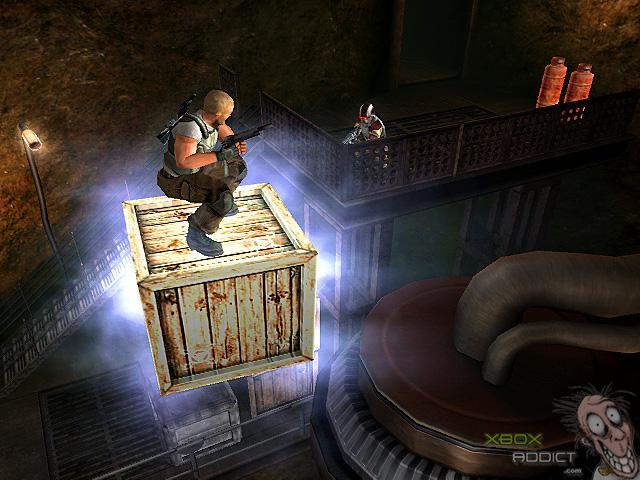 The game is set in the modern day/near future, and a few people have psychic powers, such as telekinesis (being able to move things using only your mind), mind control (take over other people using your mind, and control their movement and actions), and remote viewing (see things that are behind obstacles or in a different area from you), etc, though the general public probably has no idea about this. We're shown two organisations that know about and develop these abilities, the government department that you work for, and the criminal organisation you are sent to infiltrate.

At the start of the game, your memory has been wiped by your own side (the government department that deals with psychic incidents), so that the enemy can't read your mind and know that you are a potential threat. So you start the game using conventional bullet based weapons, but your memories return as you play through the game, which is the in-game universe's explanation as to why you suddenly develop new powers as you play through the game.

The game is really good, and is one of the few games where the boss fights are (mostly) very enjoyable. It does have one huge flaw though, and that is that the enjoyment level falls off a cliff near the end of the game. I don't want to spoil things, so I will just say that the point where you remember/acquire your last psychic power is where I always stop playing it, as beyond that point it just becomes tedious and unenjoyable. The same as in the original Half-Life, where when you go to Xen (the point at which I always stop playing HL) the game stops being fun. And, also like Half-Life, Psi Ops ends of a cliff-hanger, though since we'll likely never see a sequel to Psi Ops (tragically), we'll never know how the story would have continued.

Other than that, though, Psi Ops is a brilliant game, which is why I still occasionally play though it (minus the last part). So far, I've always played the XBox version, so I don't know how the PC version plays, but hopefully the PC version has no changes or new problems.

Thanks to Midway for their kindness in releasing this classic for everyone to enjoy. I wish other companies would be this altruistic. I also wish the game had been moddable, as fans could have made some amazing mods and campaigns for this game.

Get the game from:

(apparently the game had some draconian DRM originally, but this version has had that removed, thankfully).

Obligatory comments about Second Sight. One subject that comes up frequently when discussing Psi Ops is the game Second Sight (or vice versa). Second Sight is a different third person shooter with psychic powers, and is also a really great game. It plays a little differently, being more stealth based than action based, and it's story is better than Psi Ops' story (and it's a good game right to the end, unlike Psi Ops), but Psi Ops is longer, and more replayable, I think. Second Sight and Psi Ops came out within a month or so of each other, which is what sort of cemented a link between them in peoples' minds, though the games' stories and settings have no connection to the other games'.

Both are really good games though, and if you like one then you should play the other as well.

Second Sight is available from: This made me wonder what other commercial games had been made freeware, and I found a list on Wikipedia (what isn't on Wikipedia?), here:

I knew about the Marathon games, and The Elderscrolls 1 (Arena) and 2 (Daggerfall), and I, and I think I'd heard about Starsiege: Tribes, and Tribes 2, though I've never played any Tribes game yet.

There is a short list of now-cancelled but once freeware games, on the same page, too. The first person shooters Area 51, and The Suffering, are on that list. I have both on the XBox, and Area 51 is OK, worth playing, and The Suffering is better. It's a pity the PC versions aren't fee any longer, but at least The Suffering (and it's not as good sequel, The Suffering: Ties That Bind) are available from GOG, and currently on sale for £2.09 each.

"now" was 2008. Someone mirroring the old giveway some decade+ later doesn't guarantee it still is, especially since they've had to crack it to remove the ad delivery system. You could make this same claim about the other experimental ad-supported limited-time giveaways of that same year and earlier. They didn't intend them to go free without that technology.... you may as well be posting warez links.