Is anyone aware of the Casio SW-10 Softsynth for Win9x?

To give some color to this thread here is my desktop:

The system is running Yamaha S-YXG100 Plus (with 4MB samples), Roland VSC-88H3 and Casio SW-10 along with the hardware Yamaha YMF715 (integrated to the Intel Atlanta 440LX motherboard):

Even the YMF715 has its own softsynth part so now I can choose from 4 (actually 3 and a half, due to the double Yamahas) powerful synthesizers without a dedicated soundcard. 😀
There is of course the FM for torture and a PC-Speaker MIDI driver exists for Windows 3.1 which works with Win95 too. Check out: https://remember.the-aero.org/speaker/index.htm (midextdr.exe)
So I could possibly have 7 different MIDI outputs (with external included) on a single PC.

In case someone is interested, here are sysex and control change messages recognized by the softsynth:

Other than GZ-50M, there is an extremely rare WP-150. It's a PCMCIA card version of the GZ-50M. Man, it's really hard to find in online store! 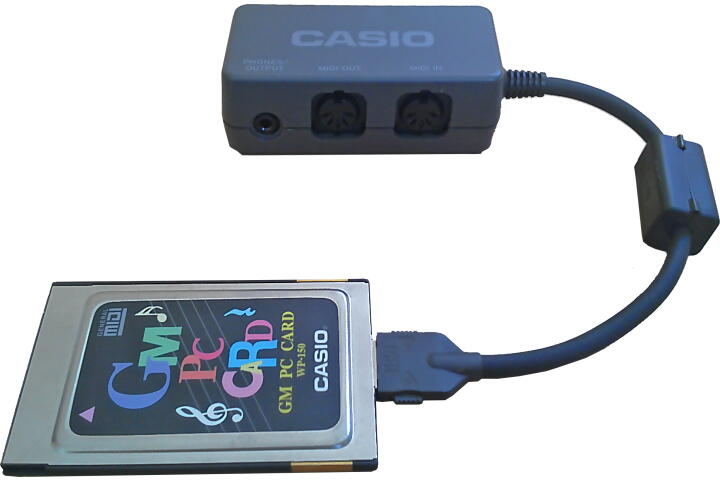 And someone here is saying something sounding like GZ-70SP, yet there is a GZ-70SP which is Japan only exclusive. (Might want to import it) It lacks the reverb/effect section though. 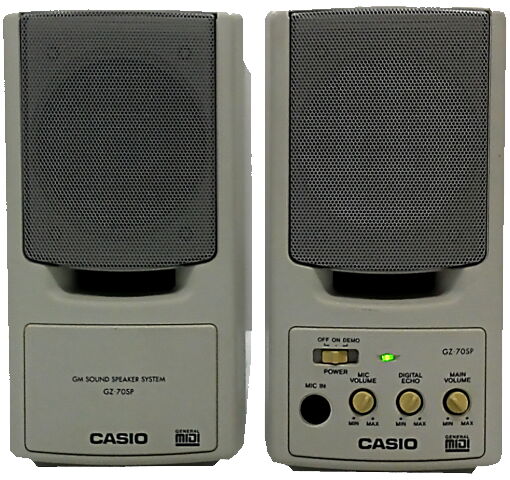 If I can get the Casio LD-80, and I did get my hands on using it as a limited General MIDI synthesizer (rather than stand-alone drum setup). It is also based on DREAM sound.

How do I properly rip the instrument sounds from the ROMSXGM.BIN file? I tried importing raw using various audio formats but still don't sound right. What is the correct audio format!?

Not sure I follow; the SC-88 has an MT-32 emulation mode no? Is it bad or does it just not work with games at all? Or is it just absent in the VSC?

Some titles, like IJFA, use the default instrument set. Others upload custom instruments via SYSEX messages.

A MT32 mapping can work for the first type but not the second. If you run Munt, you can use both types. Also, you can pipe a midi input (by sound card or usb) to Munt allowing MIDI synth from vintage hardware just like an external module.

Actually, as you can see on the image, it has a digital (likely hardware) adjustable echo function. The mic input is because it was meant for karaoke, either by playing MIDI songs directly from a PC or through special software for downloading songs from the web using a subscription service. The lower polyphony (32 on GZ-50M, 24 on GZ-70SP) might be explained by that karaoke function taking up voices.

This site has pictures of the internals: http://nostalgiapassion.blog28.fc2.com/blog-entry-711.html

It is also non-functional because it depended on a long-gone internet server from which the MIDI songs were downloaded, similar to Yamaha's MidRadio service - you'd pay a small amount (a few hundred yen) per song, after which you could download and play the song (and sing along using the karaoke function).

Like I said, I need to know the correct audio data format the samples in ROMSXGM.BIN is.

I've listened to some recording of this Synth for some classic Doom songs and I must say I am quite fond of it, it compares fairly well with my Diamond MX300's Aureal soundbank and S-YXG50. I only recently discovered the VSC-88H software synth through Vogons so I can't really compare to that, but I really hope to do a comparison between the four of them over the weekend.

Make sure Win32s is installed and it may work.

My GZ-70SP pictures and some info, as I didn't want to spam this thread with tons of pictures: Casio GZ-70SP unboxing

OK guys, I was impatient so I solved the problem myself. 😀

I had to fumble around the Windows, System and Inf directories for a couple of turns (installs, uninstalls, reboots) but in the end managed to find all the necessary files for the installation of the standalone softsynth. (Thank you RichB93 for directing me to oemsetup.inf!) If any one of you are interested I attached the installer below. Since it installs via oemsetup.inf you have to start "add new hardware wizard" choose "sound video and game controllers" and select the "have a disk" option.

Good luck and have nice music!

Can this be used in MS-DOS prompt windows?

Wait, it works with Win 3.1? Didn't know that though. And yes, the SW-10 is fully 32 bit IMO so that probably explains why the VLSG.VXD driver wasn't working.

Nice discovery you got there though, can't wait to try this out in either DOSBox or VMWare. And if possible, I could try it out in Win 3.0 as well.

My understanding is that it installs but fails to work?

Correct, it doesn't work - I just found it very odd that the setup DLL and OEMSETUP.INF approach are both 16-bit, so I wonder if perhaps an older version exists out there somewhere (may not even be called SW-10!) that does support 16-bit.

Does it work with win32S installed ?

For the earlier version of the SW-10 softsynth, I'll have to check whether it's included with the Lana Karaoke program on my GZ-70SP's CD-ROM. The version at the download link in the first post is 1.03, while the software on my CD-ROM is identified as version 1.0 in the documentation.

BTW, interesting tidbit from the Lana Online manual: the Acoustic Laboratory of Waseda University and one Prof. Dr. Yoshio Yamasaki are credited in the "Project Staff" paragraph. That might suggest some of the technology in the software originated at that university.

Edit: Some more digging has turned up the following on the GZ-series:

- GZ-30M has no MIDI IN port, it needs to be connected to a computer via serial connection to work. It only has a power connector and power switch, MIDI source switch (with only PC1, PC2, and MAC choices), TO HOST connector, volume slider, and headphones OUT. Despite sharing the basic hardware with the GZ-70SP it has the full 32 voices of polyphony (and so does the WG-130 wavetable daughter board).

- The WG-130 daughter board has room on the PCB for a DSP chip and associated ROM.
- So the GZ-30/70/WG-130 family lacks the integrated effects because they are supposed to be used with separate effect chips (implemented as a separate digital echo on the 70).

- GZ-30M, GZ-70SP, WG-130 all use a suspiciously named Casio chip GM16000N-C40, which is still available today and which very well may contain the instrument data, if "GM" stands for "General MIDI"... So if anyone wants to build a modern wavetable daughter board, they could maybe try that chip...
- The chips are also supposedly shared with Casio's home keyboards of the day...so if you want Casio General MIDI, you could also pick up a Casio home keyboard that has MIDI IN.

- There is a full size 61-key MIDI keyboard called the GZ-500, supposedly based on the GZ-50M, which was apparently also sold outside Japan. The service manual can be found here: http://www.warningwillrobinson.com.au/manuals … ce%20manual.pdf. This one is actually interesting in that it comes at a time Casio was pretty much getting out of the more professional keyboard market.

Edit 2: Managed to find the old Faith (maker of Lana etc.) website via the wayback machine. So:

They also had a product called Faith Music Station, which apparently includes a proprietary MIDI player: https://web.archive.org/web/19991105140027/ht … ara/get_fms.htm Unfortunately the link is dead...

Hey guys, so I'm finally back after quite a while. It's pretty amazing that there are some new info discovered about the SW-10 and its relatives. I'm planning to play with this obscure synth once again, and try to discover some new stuff as I go.

Also, for those interested, I will be uploading videos of the SW-10 playing back known Windows MIDIs (Canyon, Passport, etc.) since there seems to be no videos relating to these.
Canyon and Passport is actually up on YouTube now, go check it out if you like.
Canyon: https://youtu.be/jFRjz-oYKnY
Passport: https://youtu.be/YDPOND6YU_g

Also big thanks to those people who took their time in looking up for info about this softsynth!

Wait, it works with Win 3.1? Didn't know that though. And yes, the SW-10 is fully 32 bit IMO so that probably explains why the VLSG.VXD driver wasn't working.

Nice discovery you got there though, can't wait to try this out in either DOSBox or VMWare. And if possible, I could try it out in Win 3.0 as well.

My understanding is that it installs but fails to work?

Correct, it doesn't work - I just found it very odd that the setup DLL and OEMSETUP.INF approach are both 16-bit, so I wonder if perhaps an older version exists out there somewhere (may not even be called SW-10!) that does support 16-bit.

Does it work with win32S installed ?

I really doubt if it'll work with Win32S because from what I've read Win32s is only for running specific Win32 applications, and not drivers. If only there was a way to run 32bit VxDs under 3.1...

Excellent work! Loving the simplicity of your tools. Really convenient to use and from my brief initial testing it sounds just like it's supposed to.

Only tried it on x86_64, but I assume it would compile for ARM too and make a nice addition for the RPi based MIDI module emulators?

I was going to ask for an ARM/Raspberry port as well.. Also, any ideas about the legality of this?

Need help? Begin with photo and model of your hardware 😉

Only tried it on x86_64, but I assume it would compile for ARM too and make a nice addition for the RPi based MIDI module emulators?

Yes, it works on ARM - I made a release for the Pandora handheld. It should also work on other architectures.

The DLL has no dependencies and doesn't use any Windows API so it probably work on Win32S except for one possible problem - in the headers I declared the OS version as Windows 2000, I don't know if that's just informative or it's actually checked.
You could also compile the decompiled version - it probably also works in 16-bits.
The DLL alone is not enough - you need to feed MIDI data to it and play the PCM output.

Could the same transformation - from a Windows 9x driver to a generic DLL that could be used on Linux and other OS - be done with the Roland and Yamaha soft synths?