Yesterday, I had the strong desire to play some Halo CE, in anticipation for the re-release of the game in the MCC on PC, and so, I installed the game under XP Pro 64-bit Edition on my i7-3770k machine (the first install of 64-bit XP I have ever done), and while the game runs perfectly, I noticed something when I went to the Audio settings menu, after I had forgot to enable EAX effects (the system has a Creative SoundBlaster X-fi Titanium Fata1ity PCIe sound card, meant just for older games that support EAX under XP). The EAX option was grayed out! 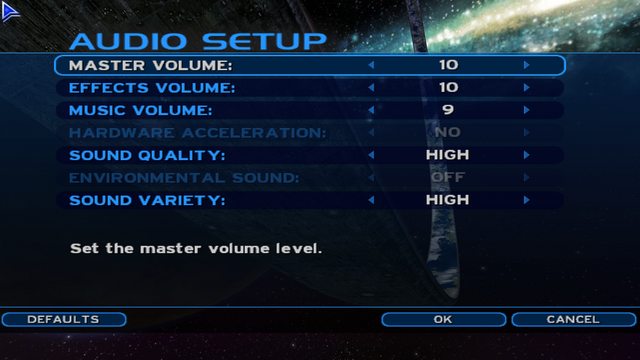 I made sure that EAX was enabled in the sound card's driver menu, and by default it is. I have the latest driver for the card for XP x64: 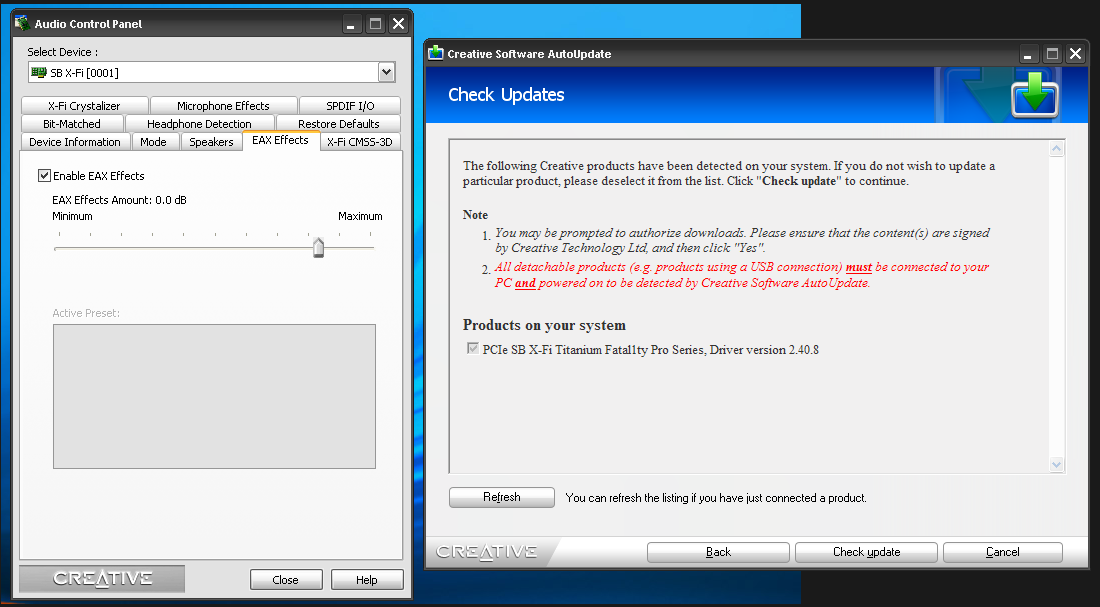 And, just to make sure Halo wasn't the only culprit, F.E.A.R. too has the same issue: 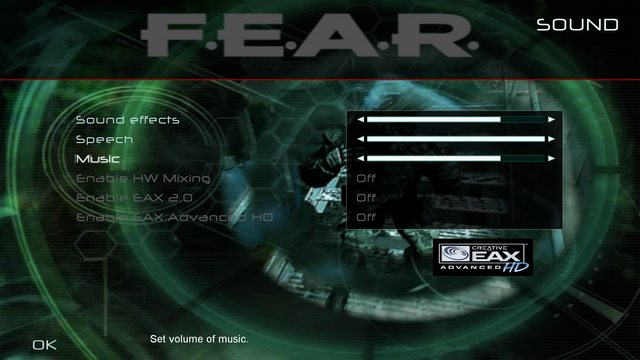 So, I'm confused as to what is happening. Are the Creative drivers kinda broke under x64 (doubt this myself)? Does EAX support only work under 32-bit OSes (I had no issue enabling EAX under 32-bit XP)? Is there some additional configuration I need to do to properly enable EAX support globally for all games, or do I have to do something on a per-game basis? I'd love to get this issue resolved, and hopefully get that slightly-better-than-stereo speaker experience whenever I boot up this rig once a month. 😜

Yeah, I heard that XP x64 has a newer kernel than x86 XP. Still... would that really be enough to make games think there isn't EAX-capable hardware when there is?

I've never thought of doing that before under XP with an XP game, but I attempted it, and nothing: 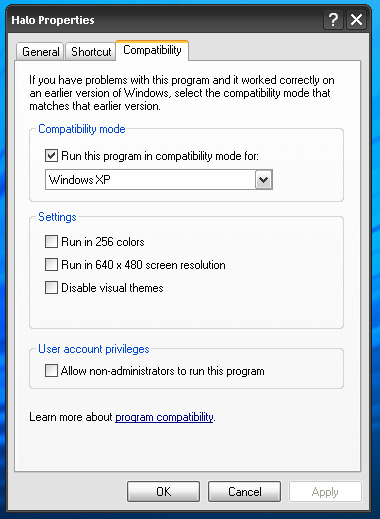 Also, the longer I play Halo CE, the more buggy I find the game to be than I ever remembered it to be (then again, I only really remember playing it for real as a child, and the rest of the times it was the updated MCC edition on the Xbox One). And I patched it with the latest official patch - 1.0.10. I've limited the game to using one CPU thread to help, because I know older XP games look at a 4-core, 8-threaded CPU and not know how to best handle all of the resources it's give, but that only does so much.

I guess I could reinstall the sound card drivers, but I seriously doubt that would solve the issue. Reinstalling the game might help, but even if it did solve the problem, a) we wouldn't know what exactly caused it to begin with, and b) that would still leave F.E.A.R.'s identical issue in question.

I think that sums it up. I remember reading this at some point. So give those workarounds a try. Alchemy on XP! Heh.

You can also try running the game with Dependency Walker to see if you are missing any files.

You can quickly test limiting the memory using msconfig

You can run through all the various driver versions, according to the below thread the modified driver worked to enable EAX on XP 64bit. Don't know if you can track that one down. If not them possibly a driver version later than the one you have may have fixed the issue:
https://web.archive.org/web/20080625113006/ht … php?t27037.html
https://www.overclockers.com/forums/showthrea … 369#post5299369

Jesus, that's a lot of info to take in. Thank you guys so much! I think I'll be able to find a solution in all of that, especially that forum post page, but you are going to have to give me some time. I'll spend a good few hours on this on the weekend.

So... I found the solution.

So, I first I went to see if my BIOS supported that "Memory Hole" feature, @swaaye, and in fact it did and was already enabled. Toggling it did nothing.

Then I added "support" for my GPU and sound card into the config.txt for Halo, as per the forum post's suggestion, @DosFreak. That... did nothing. It allowed for the game to properly name the GPU at least, but nothing else really.

Then I finished my first Legendary playthrough of the game. 😁

Then I tried dumping DSOAL's DLLs into the root directory of the game. Nothing. In fact, it essentially disabled sound for the game.

Then I tried installing different releases of Creative Alchemy. Nothing, as the installer complained it wanted Vista+.

Finally, I limited the memory XP could use to 4GB, which it then automatically so graciously rounded-down to 3.5GB, as that is the relative limit for the amount of system RAM 32-bit versions of Windows can handle. 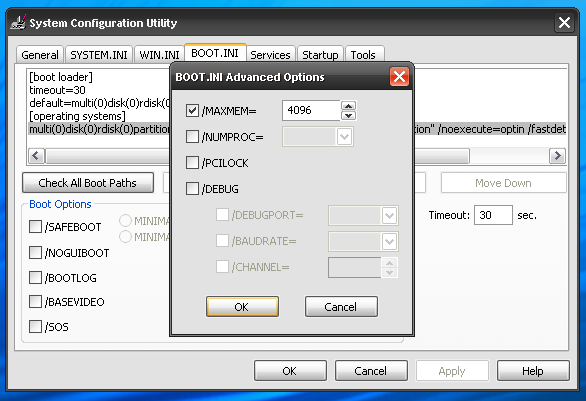 And, that did the job surprisingly. No need to mess with anything else. Although, it's kinda sad that's what it takes for EAX to work. I would'a thought at this point, maybe someone came up with a patch to the Creative drivers to solve this issue at this point. 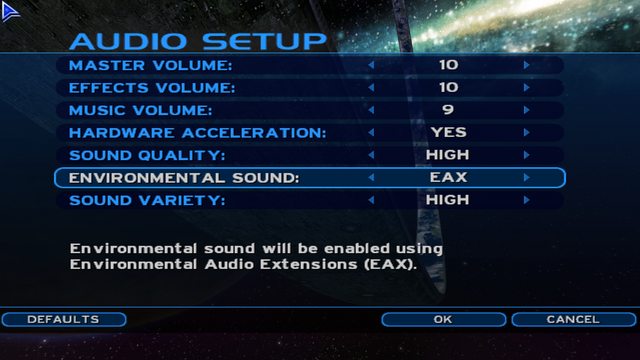 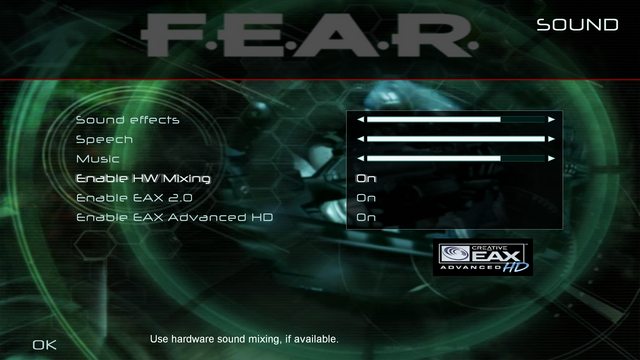 @Cyclone3D, when you were running XP x64 "when it was current," how much RAM did you have in your machine? My guess is you had 4GB or less, no?

Yeah, I probably only had 4GB. That was a really long time ago.

It would be nice if we could track down the modified drivers that allow EAX with >4GB of memory.

Until then instead of limiting the memory would EAX still work if a ram drive was used instead?
Then mabye could enable or disable as needed without a reboot.
http://www.ltr-data.se/opencode.html/#ImDisk

The More You Know TM

IMO ud be better off to just install x86 xp having more then the 3 some odd gigs x86 will let u have is pretty much pointless unless u get into games from 2007 or 8 and beyond and those games would run better under windows 7 anyway.

Not that surprising, Win2000 64bit is for Itanium only and lacks many other things as well IIRC