Picked this up locally. The seller had used it ages ago, and as far as he can remember, it was an MDA-type board (monochrome, but no graphics).

He isn't sure though... and there are two RCA outputs which might indicate CGA. It's certainly not EGA or anything that would use them as "feature connectors".

The only identification on this is "MADE IN TAIWAN" (nothing whatsoever on the back side).
Click for hi-res pics: 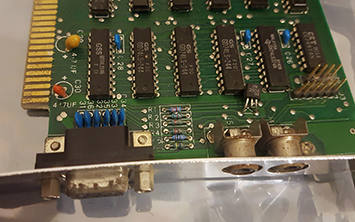 The seller also has an EPROM reader, which I don't, so we also tried to get a dump of the character ROM. Problem was, there's no visible text on the chip and we didn't know the type.

So far that's consistent with CGA. But many MDA boards (including IBM's) still contained the unused 8x8 fonts, alongside the MDA's 8x14.
For all I know, it COULD be a 8K chip, and both of these reads simply missed the relevant 4K of data. For those who know their way around EPROM types - given the above dumps, is that a possibility?

Many times could display monochrome on a RCA Composite mono screen
Even in 80 columns.

But yeah CGAish resolution when displaying 80 column monochrome over composite

My IP blocks your photos so I can count how much Ram but based solely on the light pen connector I would say it’s a CGA clone.

I can only speculate about the nature of the second RCA jack. Maybe separate composite signals with and without color?

As far as the ROM chip is concerned, try to get data sheets for both variants and compare them. Maybe you will find an unused pin or two.

You're right, I should've noted the non-existence of a clock crystal. 😉 The 16K RAM doesn't necessarily preclude monochrome, in case one of those jumper blocks can configure it to work like one, but not having an extra crystal is a giveaway.

I'll see if I can give it a test later. Still curious about the use of those jumpers, so if anyone happens to be familiar with this exact card (slim chance), that'd be cool.

...looks pretty much identical, except that mine doesn't have the "BELTRON" logo.
Still can't find any data/jumper info about that one, but at least that does confirm it as CGA.

Still can't find any data/jumper info about that one, but at least that does confirm it as CGA.

Which jumpers? I only see one jumper. J2 and J3 look suspiciously like RF modulator and light pen connectors, if you ask me.

Which jumpers? I only see one jumper. J2 and J3 look suspiciously like RF modulator and light pen connectors, if you ask me.

Indeed, like in all typical CGA cards.
And that E2 jumper probably selects thick/thin font.