I've a PCI/ISA based system and I'm trying to squeeze a bit more performance out of it.
Currently it's running a Matrox Millennium II (4MB with additional 4MB expansion)
I have a Diamond Viper V330 (Riva 128, 4MB) on hand but it's a nightmare swapping cards over in the system I'm working with, I'm also ironing out some PSU issues currently so I'd like to take it apart once and resolve all issues while in there.

What would be the better card of the two for overall performance in 3D titles, such as Quake, Virtua Cop 2, etc?
Right now the systems running an Intel Pentium i200 (200mhz) with 128mb EDO, and Windows 95.

I had tried the Diamond Viper v330 previously and while it installed file, it would bluescreen whenever I attempted to start a game, but so did the Matrox, which ended up being the PSU issue I'm currently sorting out.

There is a temptation to bite the bullet and just source a GeForce 2 MX PCI for it but I feel like the Millennium II / Viper v330 are better suited to this CPU, at least for now.

So I've pulled the Matrox and installed the Viper v330, but it's having issues.
Namely, when I first install it, or boot to safe mode, everything is perfectly fine, but as soon as the drivers are installed, the display garbles, heres how it looks: 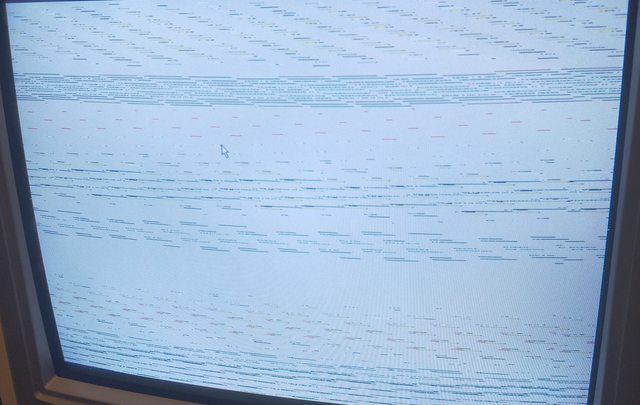 I've connected the video output to another few monitors of different resolution/size and it displays the same mess on each, the cursor has no issues at all, and everything (POST/Dos/Windows 95 boot screen/Initial windows boot) display fine right up until the driver loads and then I get that.
Is this likely to be a memory issue on the actual card? I've removed each of the capacitors on the card and tested them and they're all well within their labelled spec, I've tried a few different drivers too, all with the same results.

Windows isn't actually crashed, everything works it just doesn't want to display correctly, right click menus etc, even a game i booted all work alright minus the garbled video.
My first gut instinct is vram, but wouldn't it do this without the driver loaded if it was vram?, I'm kinda stumped.

Edit -
So, weirdly, if i launch winquake from the desktop then exit out of it, everything displays normally until next reboot.
however, if i launch glquake, it runs PAINFULLY slow, like frame per seconds rather than frames per second.

Okay, seeing as the Riva is acting up, and I'm encountering a weird issue with the Matrox, I'll repurpose this thread.

So basically this system is an all in one PC/CRT TV.
With the Matrox Millenium II installed, games that use 3d acceleration are functioning very weirdly, as an example, the Matrox version of Tomb Raider 1, shows the matrox logo garbled because the monitor cant handle the resolution, but then the FMV sequences look fine, if I output the VGA to an external monitor it all displays normally, which leads me to believe the resolution it's automatically switching to when I attempt to play the game, is out of range for the built in monitor.

I've connected it to an external monitor and from what the monitors diagnostics mode says, the parts that the systems built in display are having issues with, are 640x480 75hz, the parts that display fine are 640x480 60hz.
Is there a way to force the card to use 60hz for ALL resolutions and prevent tomb.exe from forcing 75hz for the non-fmv sections?

EDIT--
I've now tried UNIVBE, SciTech DD and even HzTool, no matter what settings I use or what refresh I force, when launching the game it forces 75hz every single time.
Super frustrating!