Do you have any site page where I can go to and see your work?
I am a fan of EOB too.

A worthy game, really.
What I did is just this, the portraits and already patched eye.res is here as I mentioned

as for EotB-1 ver 1.9 "Stone Gem Edition" based on Demo, it was uploaded on a variety of sites by many people.

I could not even track it. When I did it I even did not have an Internet connection... (long ago in a galaxy far away).
Now I see it here:

It has no maps or password list unlike I uploaded it once. But all other things I hope are OK. With DosBox it must work perfectly.

Hello All!
Good news, I must admit I could not fix completely some things in EoB-III portraits just in one hit in Version 7_27 of EoB-III Portrait Restoration patch. So,

Ver. 8_28 Plus 8 is available! 😀 It will not be a disappointment for EoB lovers.

Besibe 28 "main" portraits I included 8 more. The Bright Eyes set 😀
As the vile EoB-3 artist beside just spoiling many portraits has dimmed the eyes of many other portraits - which are otherwise OK. "The Dimmer of Eyes is his name."
Now I corrected this portrait set "eye" trouble. 😀 Fixing some other problems with these portraits too.

The download for the patched EYE.RES file is here as usual, please see the end of the post:

I did one simple thing here, too. Beside fixing minor problems I completely dropped the attempts to fix or embellish EoB-3 versions of certain portraits. Making -better copies- of EoB-1 portraits, instead.
It looks better.

This is about the Green Elf mage, whose complex portrait composition was simplified by EoB-3 designer, also the Blue Mage who was totally remade in EoB-3 making him ugly and very yellow.
No longer I tried to correct his face, a better copy of EoB-1 Blue Mage is better 😀

Also it's the case of the Dark Girl. Keeping her "simple" as in EoB-1 is the key.

I added a completely repainted portrait of the Dark Warrior, with horns 😀

(Never fixed it in the past but it had to be done. I'll mention as to why.)

A short summary, I published it already on EAB forums and should repeat it here...

Sure, the Green Girl picture where it all started, as it became even less crooked 😀
Can't help but see it was a little crooked in the EoB-1 original. 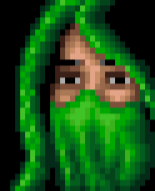 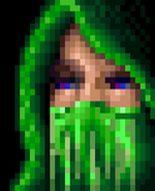 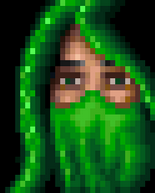 Well, nearly it's EoB-1 in EoB-3 colors. Might be even more agreeable than the original. Cute. 😀

Let's see what's the problem with him... 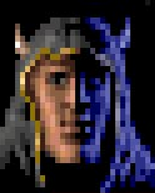 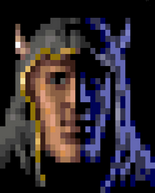 EoB-3 version is crude, the right part. As it was repainted in EoB-3 with -one- continuous steel-grey color instead of 3 or 4 blue colors used in EoB-1.
And more greys.
EoB-3 palette lacks some blue colors, so it was simplified and never corrected before.

Now I used all blue colors and less steel/grey as in the original. The color transfer result is smooth now and looks nice as in EoB-1. And yes, I have fixed the portrait centering. 😀 No tilt to the left, now. Ver. 8: 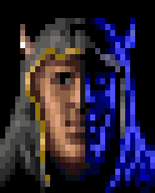 Looks good in the game. Otherwise EoB-3 version was more primitive than that of EoB-1 😀

*
The problematic Green Elf mage and the Blue Mage.

The Elf had a more complex portrait composition in EoB-1, 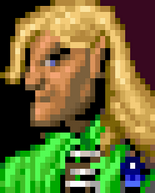 Turned primitive (and ugly-faced) in EoB-3: 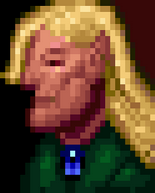 In my Ver. 7 I restored his face but it was not enough. The portrait composition was still primitive: 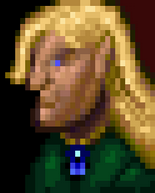 Now I have returned the "proper" EoB-1 clothes and composition.
Well, this Elf is much more impressive. Ver 8: 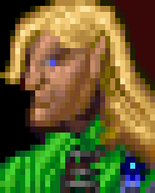 Not to mention authentic.
How good was that EoB-1 artist/designer!

*
The Blue Mage, was the pixel art perfection in EoB-1: 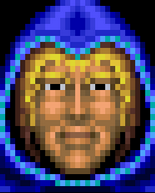 In EoB-3 he was majorly re-painted as an ugly (and yellow) individual. 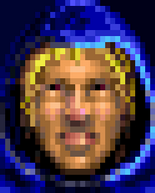 in Ver. 7 I fixed his face but it was still "not quite" and too yellow.

FIXED. I totally repainted the picture using another color set. It's now as the original or even better, as I use more face colors than EoB-1 (lucky here, huh.) 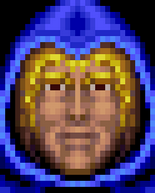 Was small and simplistic/disheveled in EoB-1, 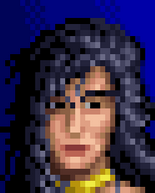 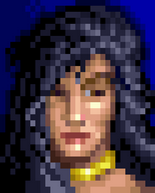 Now I didn't try to fix these EoB-3 features to make them fit, just returned as much EoB-1 as I could. Including the background and the jagged hair line in the left part. Ver 8: 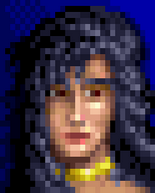 To me, she looks just great now. Also authentic. 😀

His kind (EoB-1) face I returned in early versions like 5, that task was clear 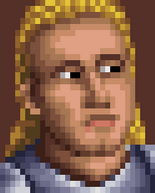 EoB-III, unkind face and spiteful as if he has eaten a worm 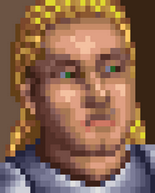 But I could not remove that ultra-shiny pixel on this right shoulder (pauldron) where his armor collar goes behind this neck.
Now I moved some parts and this pixel shines moderately, all in place 😀 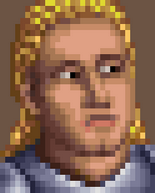 A standard case but special in a way... A problematic portrait that was -not- changed by EoB-3 artist. Even the eyes were not dimmed.
Somehow the EoB-3 butcher "artist" did not spoil portraits that were already problematic. 😀 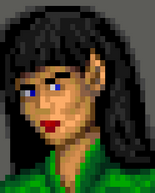 I fixed the face in ver 7 and the neck. But the eye and the centering, well, only now 😀 Ready! 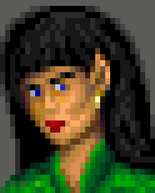 She looks just great in the game. 😀

*
The complex, Gruffy Dwarf with no eyes 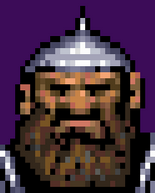 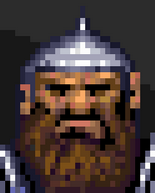 The EoB-1 dark violet background color doesn't exist in EoB-3. Not found in the palette.

I tried many other colors but they don't fit the character. Look just dead and boring at best.
By users' comments, blue fits well. 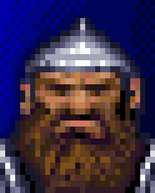 Mainly the character spirit is there and it's not boring! (as with grey/steel background).

*
Now the rare and sort of weird, Anya.
As it was with the Paladin, the face and the background I corrected long ago but the armor...
It was complex.

Like the Paladin's, this problem originated from EoB-1. It's easy to see Anya's armor shifted somewhere to the middle(!) of her chest.

I expect that happened as these portraits were made with EGA and CGA in mind as EoB-1 supports them. Minor shifts like 1 pixel in VGA were not easily seen on smaller screens, 14" or less. The portraits were very small on these. 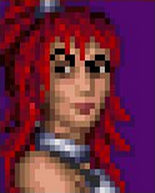 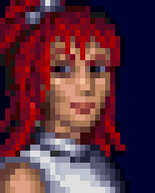 EoB-3 has no old modes, olny VGA. The screens by 1993 got bigger. So the picture had to be repainted, I agree. EoB-3 poor artist just removed her exotic armor.
Also spoiling her hair (in 3 ways) her face (in 3 ways) and her body (in 3 ways). Plus the "new" dull background. One may find the differences by comparing these pictures.
Pity. 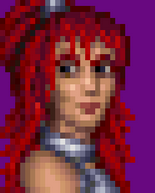 All the other problems created by EoB-3 bad artist I removed and fixed. Anya is just gorgeous now. 😀

Very complex portrait but great in a way.
I have heard more people take Anya to EoB-3... She is very charismatic! 😀

*
To sum it up I corrected, compared to ver. 7, many dozens of big and small issues.

With hair, background, armor pieces and even faces. (And eyes, those 8 portraits.)

All results are much more agreeable now.

Also there is separate portraits archives set in .bmp and .bin EoB-3 formats.

Congratulations!
Indeed, ~many~ changes to the best were made.

My gratitude to dim568 as your converter program allowed a miracle to happen! 😀

Thanks for the effort!

All the EOB3 pics look like they were taken after a bong 😀
Now they look way better.

Someone should come out with a new episode, EOB 4.
Now I have to replay the game.

You are most welcome! 😀

Uhuh! 😀 The "default" EoB-3 portraits have -squinty- and -dim- eyes... Which creates this kind of impression 😀

Why they did it (in this terrible style) is still a mystery! 😀

Some characters even got no eyes at all. Like that Green hobbit, in EoB-III.

Now all those best character portraits that suffered in EoB-III are OK! 😀