Did my first build in months: 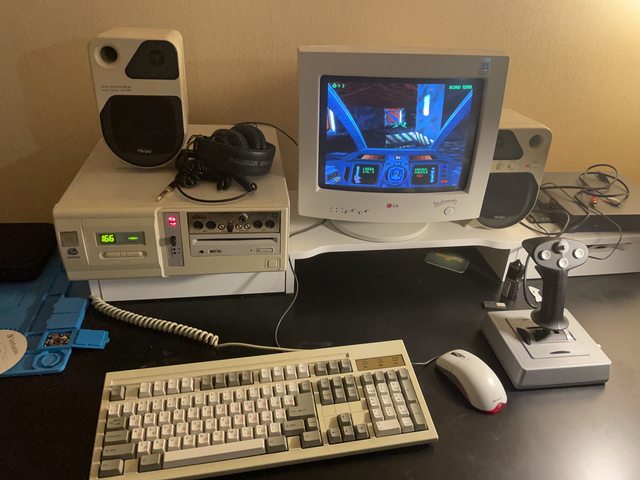 The catalyst for all of this was that I finally found a NOS 14 inch SVGA screen — .28mm dot pitch, shadow mask, kind of a fish bowl. I think this kind of screen can lend itself nicely to 2D and early 3D titles — so this is what I've had in mind for this build. 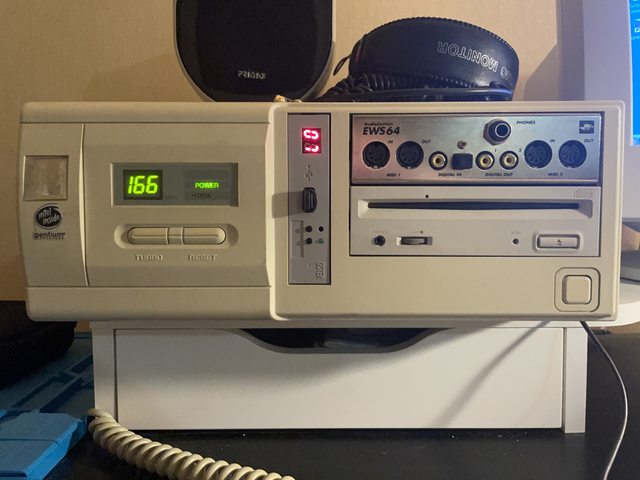 I've picked up a baby AT case, thinking I will put the screen on top of it, but it ended up being too high even with the stand removed — because of the drawers on my table. So for now it will stay next to the monitor 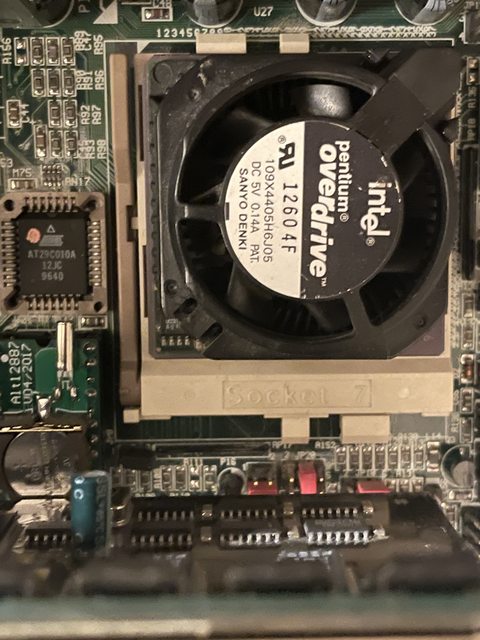 At the heart of it, weirdly enough, is a Pentium Overdrive MMX 166. I think MMX 166 is one of the most versatile chips for DOS games thanks to still being under 200 MHz and having registers you can tweak through setmul but still having double the L1 cache compared to a regular Pentium.

My motherboard is a DFI G586IPC — a 430HX board that, weirdly enough, doesn't support split voltage — hence the Overdrive part. Oh, well, at least I don't have to mess with jumpers, the board originally came with a Pentium 100.

You can also see the Alt12887 chip — an ODIN replacement. This board, thankfully, has a socketed ODIN battery, so replacement was a quick job. 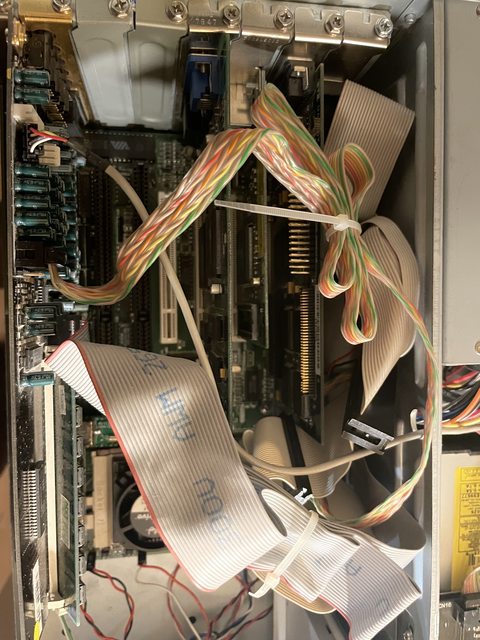 The full specs are:

Pentium MMX 166 Overdrive
DFI G586IPC rev D with 512KB L2 cache (upgraded with a COAST module) and 32MB EDO RAM
Matrox Mystique 220 videocard — I've found that output strength and quality really matters on a low-end monitor like this LG, because it's relatively dim compared to my CTX with a Trinitron tube. And that's still a NOS monitor! So Matrox and Tseng cards are indeed better than S3 in this case — even if they are not as compatible with DOS games. Upgraded the BIOS to version 1.8
Diamond Multimedia Monster 3D (Voodoo 1) — more of an afterthought, but could still be useful for some DOS games
3COM 3C905 network card
8GB Seagate HDD — I'm using Win95 OSR1, so this is the biggest disk I can use, 4 partitions around 2GB each. I'm also using Triones 3.22 IDE drivers (that's what the board actually shipped with), but so far haven't noticed any difference to normal Intel drivers.
Terratec EWS64XL with Dreamblaster X2 installed. Monster of a card. I hope, I'll get a better understanding of it this time
PS/2 ISA card adapter — because my DFI board has a 6 pin PS/2 header that I don't have a cable for. My only serial mouse was a Genius EasyTrak trackball which I absolutely hated after a few hours of usage. Definitely not a great choice for FPS games.
A Gotek floppy drive and a Pioneer 24x slot-loading CD-ROM.

Proper cable management is next to impossible. Even though I hid all the IDE, COM and LPT cables, the Terratec still needs three cables — one to connect to the CD-ROM audio out and two to connect to its metal enclosure. By the way, that thing is absolutely hideous when you try to connect your headphones to it, really noisy. 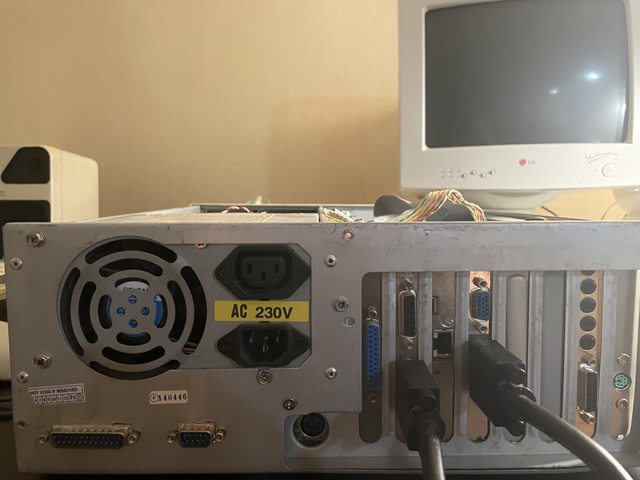 Originally I wanted this build to be pretty straightforward (it's just a Socket 7, after all), but there were still a few caveats. First minor thing was flashing a MR BIOS image: 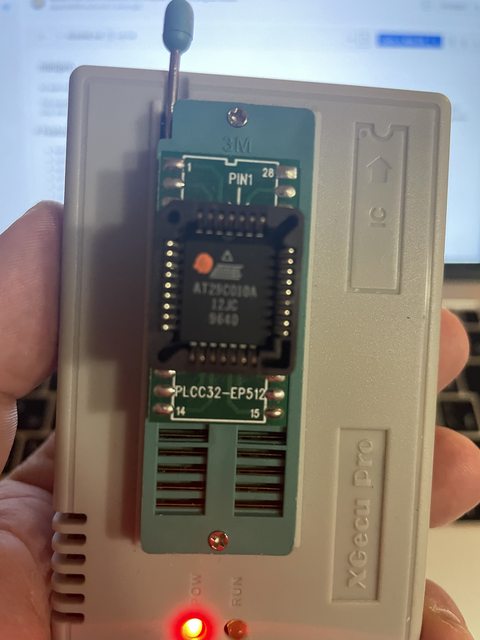 Thankfully I had an adapter for the PLCC32 BIOS chip. Even though the MRBIOS doesn't list the rev D, there's an image for rev B with the same I/O chip (V098B5SC), works really nice. The benefit is very quick boot time. The downside is lack of CD boot. Also, I think I've gotten used to having my CD drive as a slave device on secondary IDE channel which MR BIOS doesn't work with. If it's the only device on an IDE channel, it needs to be master. I don't think Award or AMI BIOS require that, actually.

Then my PS2 to DIN adapter decided to die. I only had one AT keyboard in my storage — an AT/XT one, actually. The arrow keys didn't work, and there were other keys missing. I had to actually disassemble the whole thing: 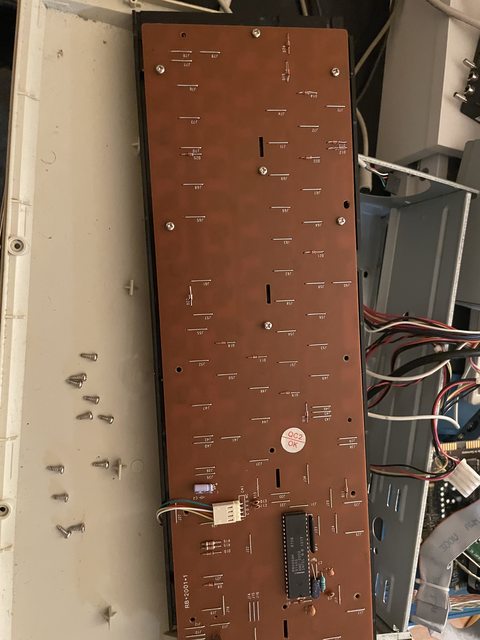 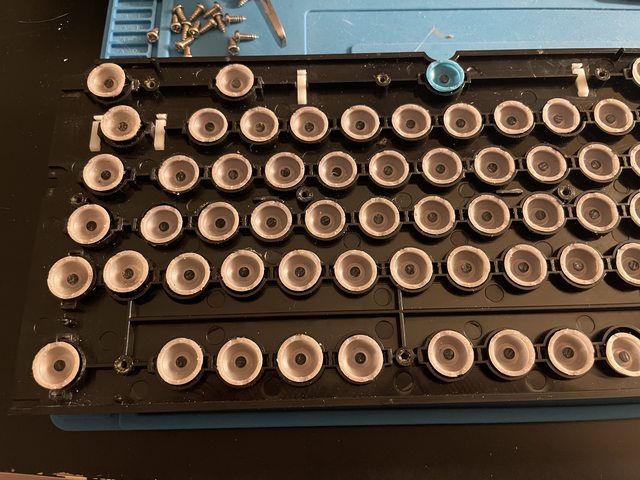 It turned out to be a rubber dome, and even though it's pretty clean for a 30 something year old keyboard, I still needed to clean all the graphite pieces in every single dom with IPA from dust and a bit of decay. After that the keyboard works pretty well.

So far, I'm really liking this build. Not really period correct or anything, but somehow the lower-end screen really gives a more nostalgic experience. I think I've actually used a similar 14 inch SVGA screen back in the day — probably a Samsung SyncMaster 3NE. I would definitely not use it to work with text or spreadsheets, but gaming? Pretty nice.

Finally restored all of my Retro PC!
Here some photos! 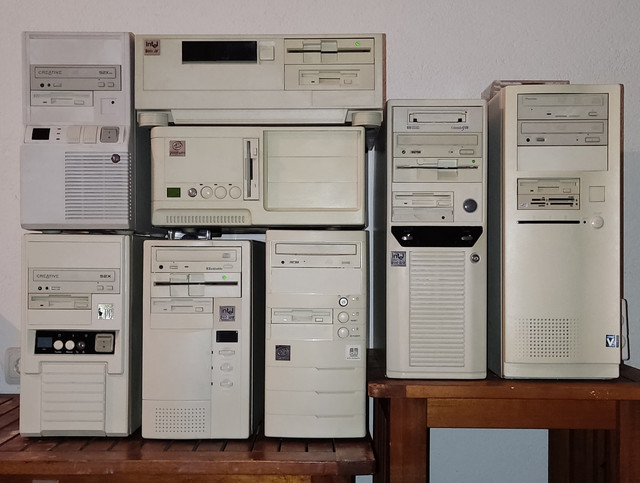 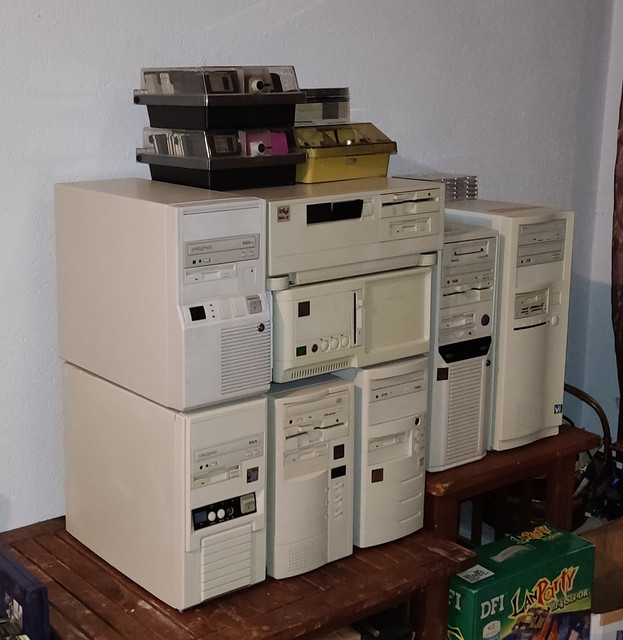 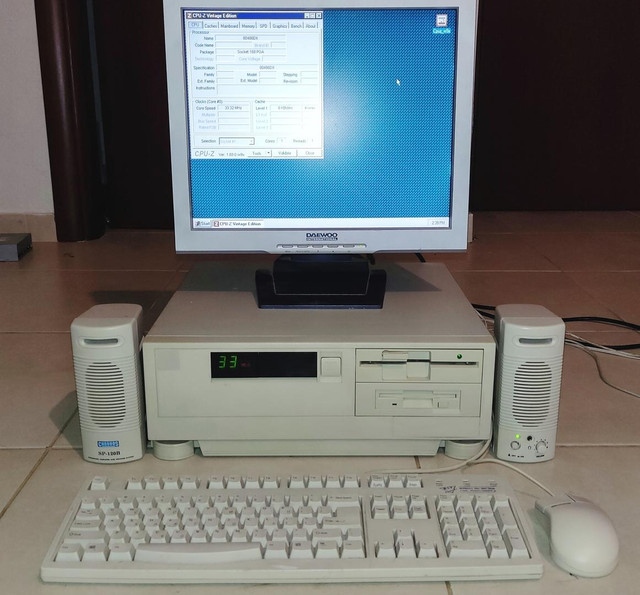 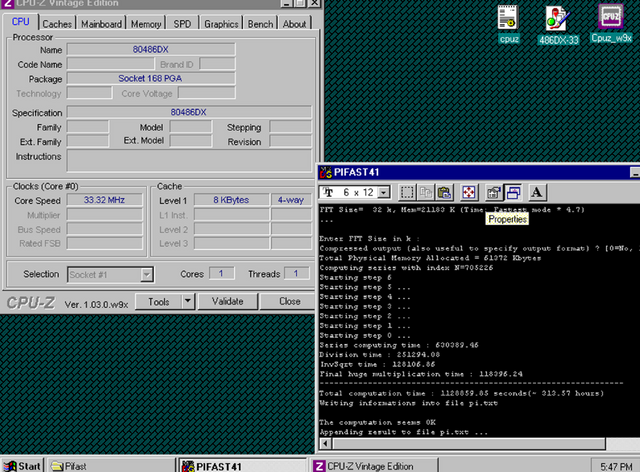 Differences regarding speed? What do you mean?

Differences regarding speed? What do you mean?

What are the specs? 😁

it's like you randomly selected the latest pc from a computer magazine every few months in the 90's!

a great spread of PCs there, and all so clean!

Finally got my Pentium 233 MMX setup to a point where I'm happy with it and seem to have most things sorted, I'm looking at you Windows 95 🙄 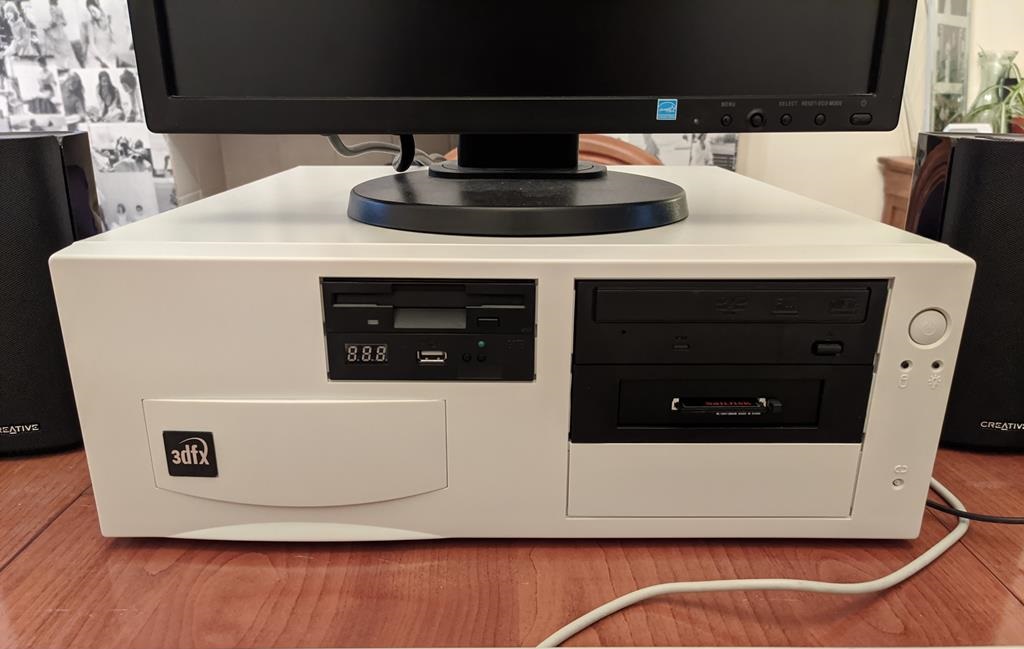 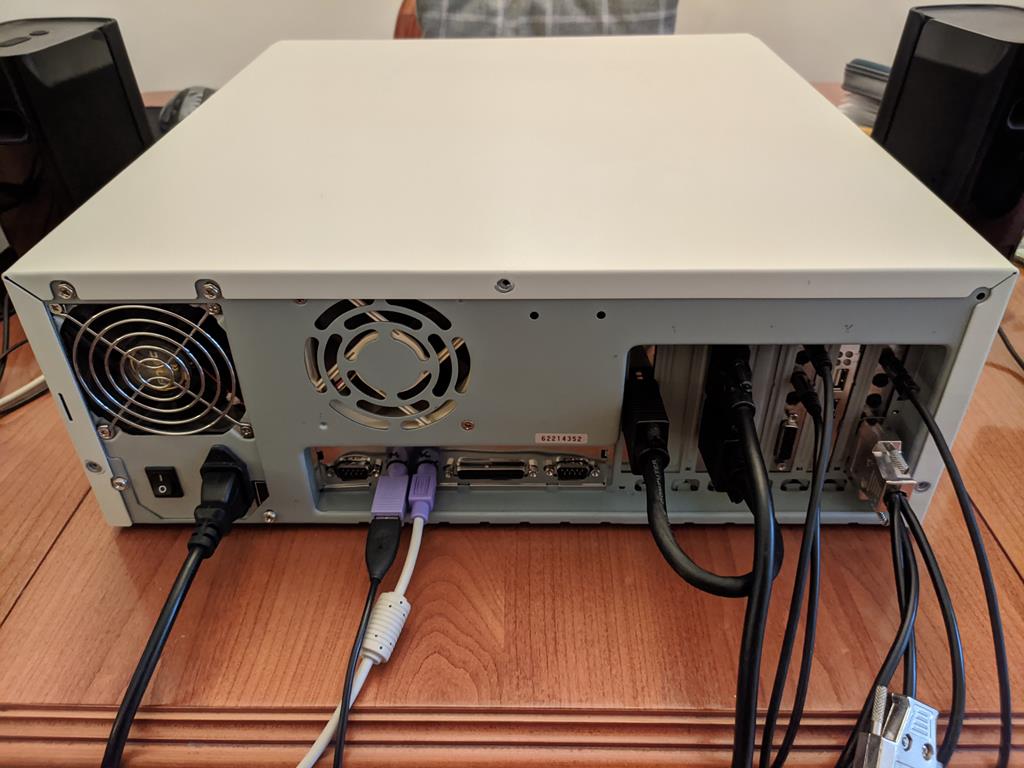 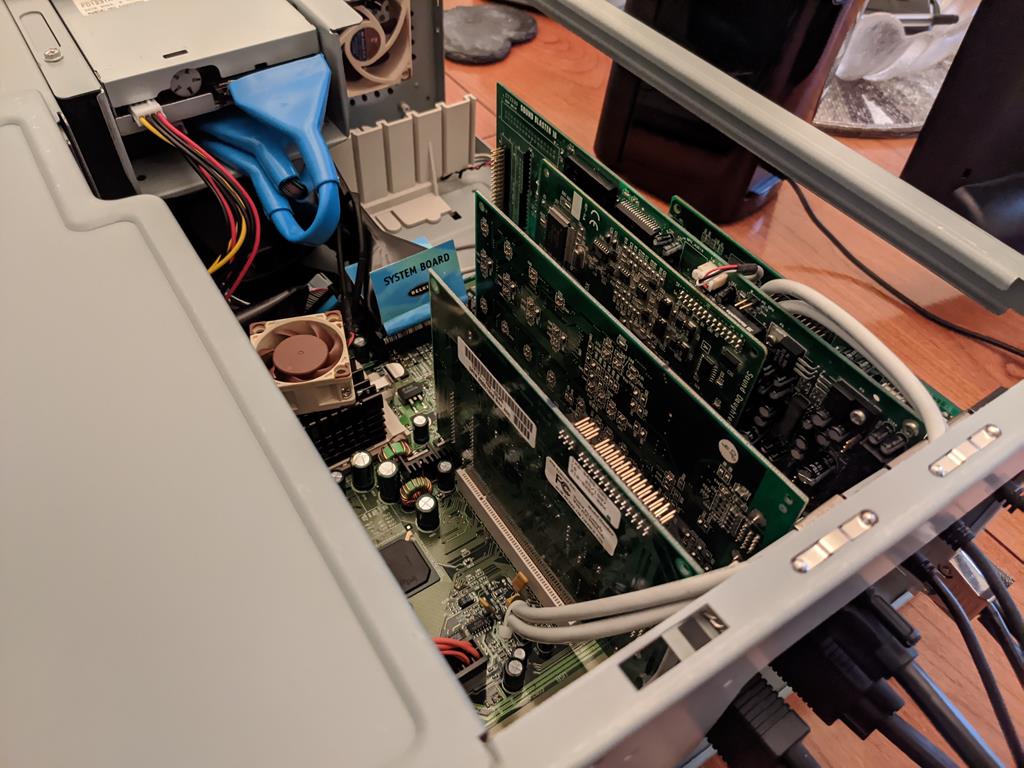 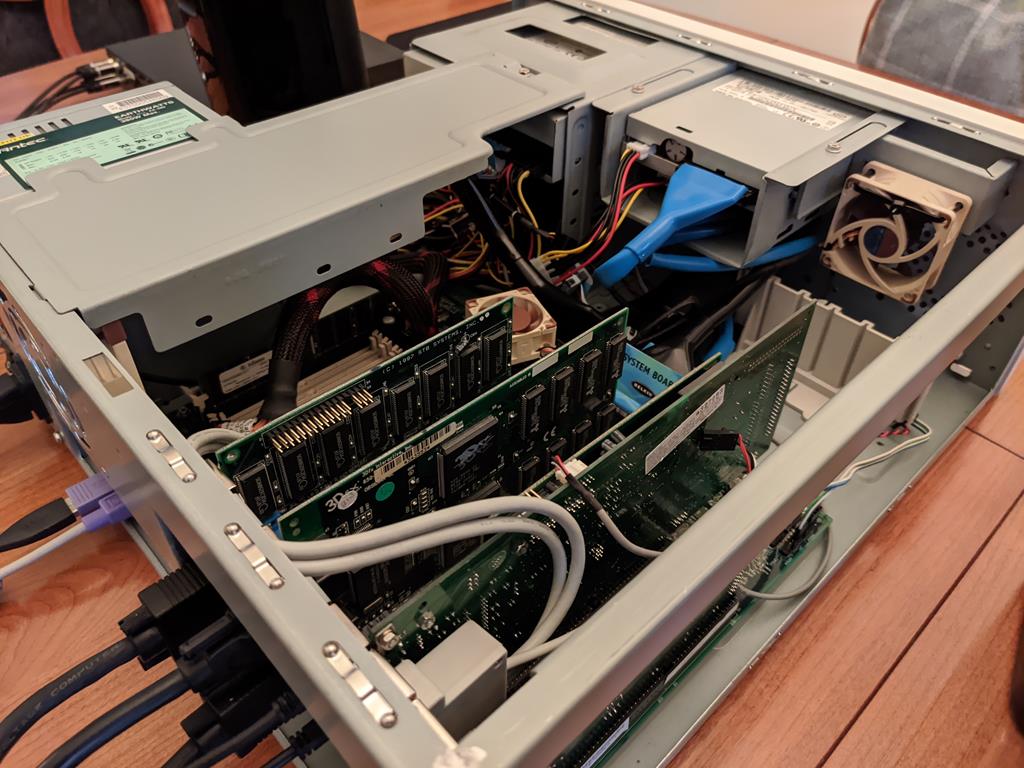 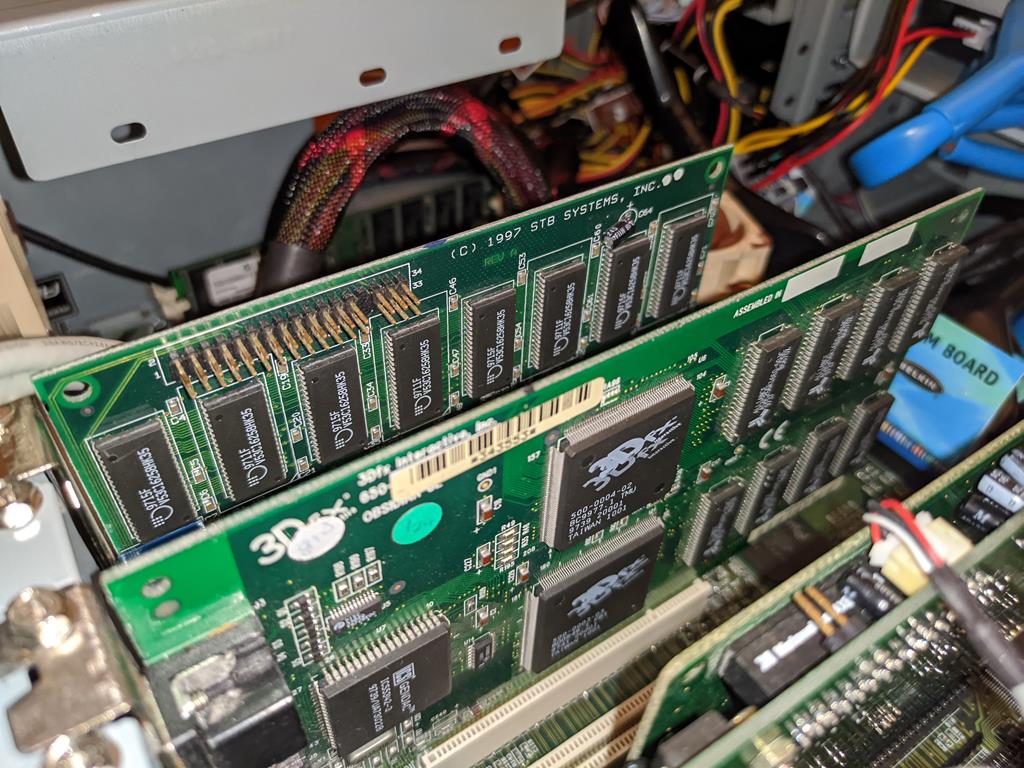 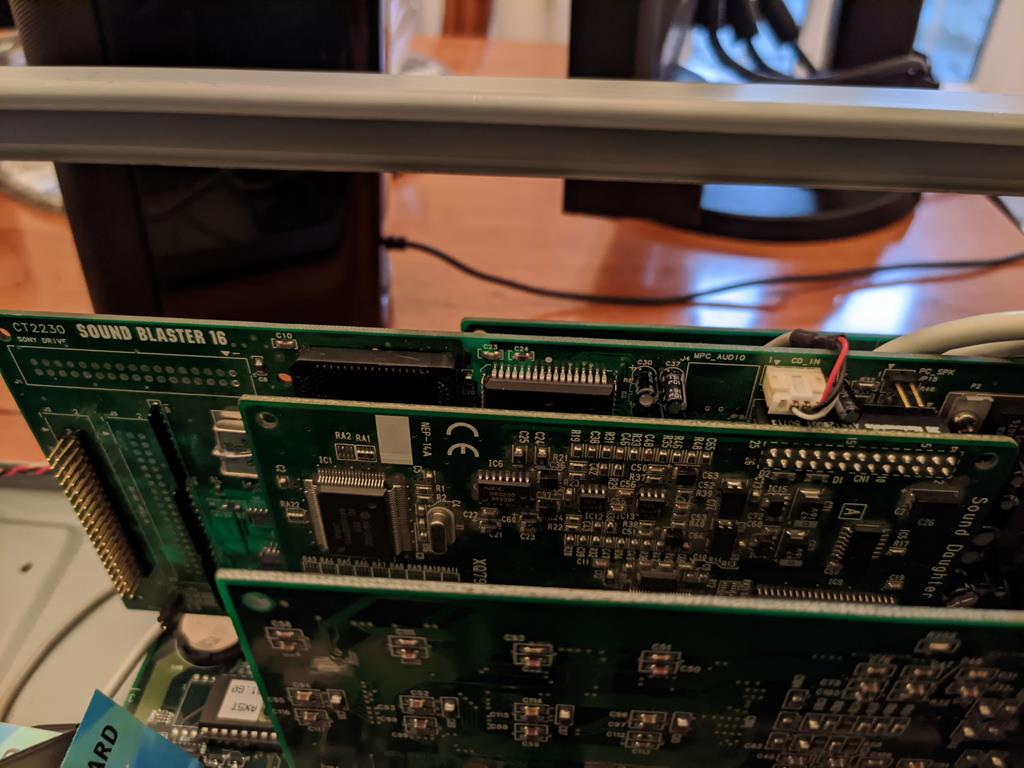 Plus the right amount of Noctua. 😀

I've stashed nearly all the beige and quirky hardware away and this is the machine that gets most use, as it simply works.

Very nice machine. Did you connect the front-panel ports somehow?

I've stashed nearly all the beige and quirky hardware away and this is the machine that gets most use, as it simply works.

Really clean build, would you mind to share the Brand/Model of that case? (I suppose its still available new?)

Had once upon a time this nice Pioneer slot in drive... but unfortunately it stopped working and i threw it away..
Must be a 2003-4 model ?

Really clean build, would you mind to share the Brand/Model of that case? (I suppose its still available new?)