I've decided to do a few of these <year> dream PC builds since I find them cool, this one is gonna have pretty much the best 1999 parts and of course run Win98SE, maybe dualbooting NT4 just 'cuz it can. I don't have all the parts yet, I'm in the process of looking for some, I'm even not sure which I should look for, for some of them, as finding info online on such old stuff is getting hard. Here's what I aquired recently: 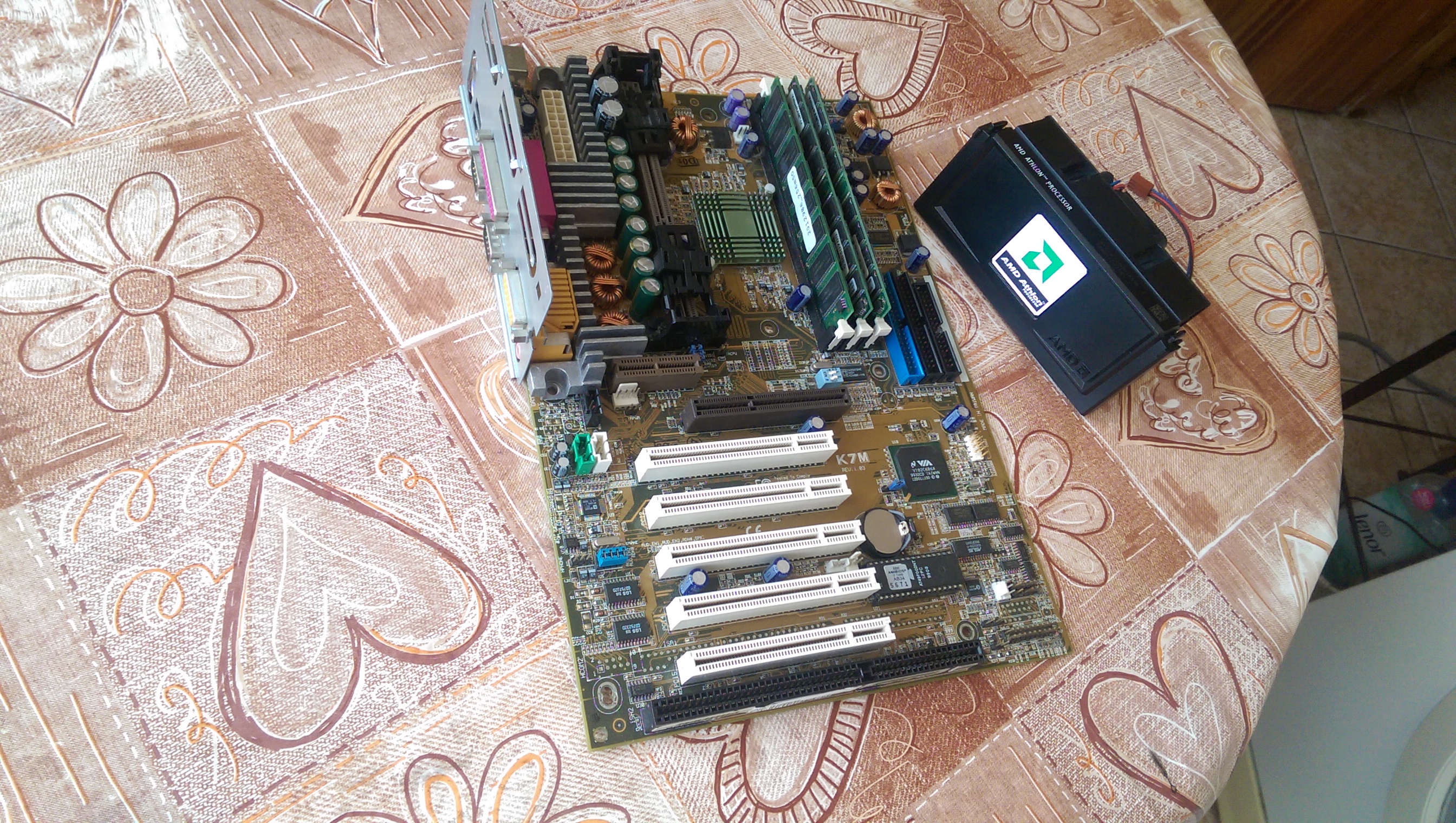 Asus K7M rev 1.03 motherboard and AMD Athlon 700 and 3x256mb ram, this is the top model of the first 250nm Argon generation. Technically, at the very end of 1999 the newer 180nm Athlon 750, as well as P3 Coppermine 800 got released, so they would be technically the fastest 1999 cpus, but I think this Athlon 700 is cooler, because for the majority of 1999 you had P3 Katmai up to 600mhz and these first gen Athlons that were kicking its ass, even the lowest 500mhz Athlon was faster.

For graphics, I have aquired a 3dfx Voodoo3 3500 TV AGP, which I can't show right now because it's at a friend's place, but he should bring it to me next week. Again, technically GeForce 256 SDR is the fastest 1999 graphics card, but the voodoo3 is cooler I think, and not much slower either... Actually, you know what, lets say this is dream 1999 pc as of October 4-10, 1999 - at that point of time, the gf256 sdr, coppermine and pluto would not have been released yet, so this PC would indeed be as good as it gets.

Now, for sound, I will want a Creative Sound Blaster Live! CT4760, which I can easily get locally as just the card, but I want one with Live Drive or Live Drive II included so I'm hoping one shows up on ebay soon. Should have been the best sound card in 99 I think. As for the ISA slot, I really don't know what to put, afaik the last ISA sound cards got released in 1997, so theres no period correct ISA sound cards for 99.... maybe I'll use the new AWE64 Legacy assuming I can buy one.

And, with all the major components out of the way, what's left to complete this is to decide on and acquire the best 1999 ATX Case, power supply, hard drive(s), optical drive(s), floppy drive, and misc accessories. I'm not very sure about these... could use your help on figuring them out. Case wise, I think Chieftec Dragon was the best 99 case, but looks like a rather tall full tower to me, I dont really want something this big, I will be doing quite a few of these <year> dream PC builds, so I dont want them taking too much space. Cooler Master ATC-100, the first all-aluminium case has released in 1999 as well, and thats probably what I'll look out for, tho the silver color of it won't match perfectly with the white/beige 5.25" drives. Are there any good 1999 white/beige cases? For HDD, I think Quantum Atlas 10K 36.4gb SCSI HDD was best in 99? But the only one of those on ebay is way overpriced 🙁 For PSU I'll just use something good regardless of year, probably gonna use an Antec SL350 re-capped that I have, its a bit newer but has strong 5v rail and pretty good build quality, disregarding the og caps. Optical drives and stuff, I honestly have no idea, I will have to depend on you guys 😀

I had never seen the board with that large VRM heatsink before. Looks really cool.
Does the heatsink get hot or is it more for show? I have a rev 1.04 and the VRMs get a bit toasty bot certainly stay within specification.

Not sure, I haven't used the motherboard yet. Just now I powered it on for the first time, it went into BIOS, so I guess it works fine, Im sending the seller positive feedback. The VRM heatsink is loose, looks like the screws that hold the motherboard to the case are supposed to hold it in place. It has thermal pads underneath that are all messed up. I should probably replace them.

but I think this Athlon 700 is cooler, because for the majority of 1999 you had P3 Katmai up to 600mhz and these first gen Athlons that were kicking its ass, even the lowest 500mhz Athlon was faster.

I'd say Slot A is cooler over all simply due to being a lot more rare!

Re Sound Live drives are becoming harder and harder to get for a good price. I'd just get the card for now and keep your eyes open for the LiveDrive, it may even work out cheaper getting it separate.

ISA slot, I put a 2nd hand Vibra16 in my P2/400 for dos games in 98. So it's period correct in that people were doing it back then even if the hardware itself was much older.

Hard drive, yeh SCSI would have been king but hard to justify now. I'd go for some "massive" IDE drive

Quick google found this mag from Jan 2000, great sources for period builds. If you look harder you can prob find one closer to your date.

https://books.google.co.uk/books?id=UEgKC-lu4 … epage&q&f=false
Page 205 has a hardware list largest drive is the 37GB IBM37GP 5400rpm, Other manufactures have 27GB 7200RPM drives so your looking something round that mark.

Optical drive you can either go with 6x DVD "that was the thing to get in 99" CD burners were also not mainstream (I was the only one in our group that had one) it was common to have both a burner and a ROM drive if you want to be authentic.

Well, the point for this is to be a dream PC, something you would have lusted over but couldn't afford, so even if CD burners and DVDs werent mainstream yet, as long as they existed and were available to buy, for a hefty price back then but cheap now, I'd want them 😀 As for the ISA thing, of course you can use older parts and not everything has to be released in the particular year, normally, but I would be doing other <year> builds as well where those would go, for example an AWE64 Gold would go into my eventual 1996 build, that I have pretty much no parts for yet sadly, so I shouldn't also put one in this 1999 build, but then again I don't want to leave the ISA slot unused when its available... 2000+ builds wont have ISA slots I guess, and theres period correct isa sound cards up to 97, so I guess 98 and 99 build are the only two that I have to figure something out for. AWE64 Legacy if I can get one will probably go into this 99 build, and for 98 build, idk, I have some isa card with yamaha 719E-S chip on it, I have no idea what it is or when it was released, with some luck it could be a 98 card? 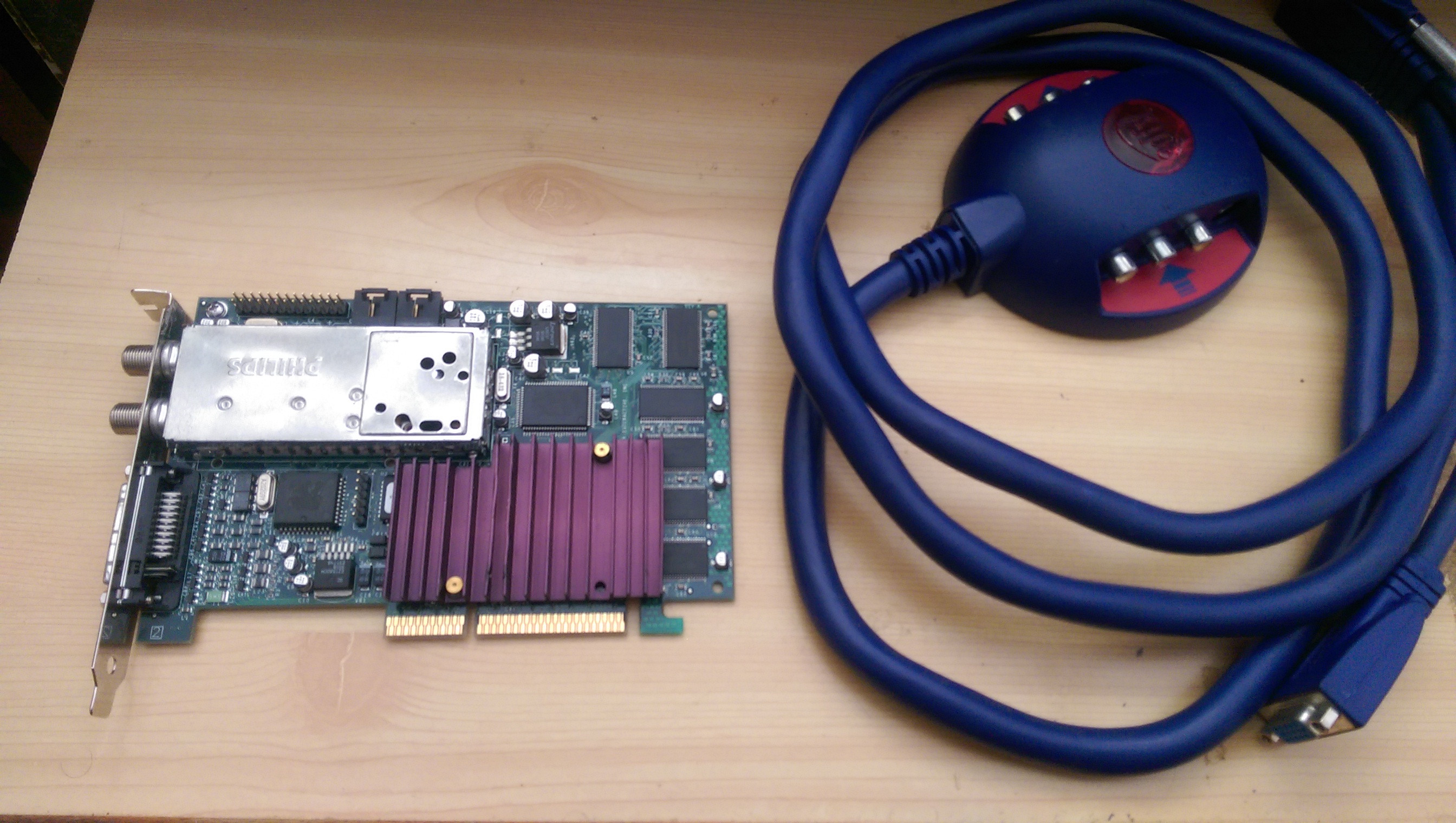 took a while, but the voodoo3 is finally in my hands... dayum, that cable is thicc af

I just so happen to have a K7M motherboard myself, the very same one that I've had for 20 years. Mine in particular is revision 1.04, which doesn't have a VRM heatsink and was acquired in 2000 with some other hardware, like this Antec case I can't find the model for. Inside the case is a QA stamp dated in 1999, so it should be an excellent case for an Athlon build; it housed the K7M for 17 years, but currently holds a dual Slot 1 motherboard. We may have been a year late to get this sort of dream hardware, but the case is definitely authentic for 1999. It appears to have gone through at least a couple revisions, as mine has extra rear ventilation that must've previously been used for extra I/O punchouts. A full tower variant of this case does exist, and I just so happened to find one on eBay but directed one of my friends to it for his own retro build.

Looking at the back pic, this should count as a full tower, look how tall it is. I dislike cases this big, they take up too much space. That's why I'm not gonna use the Chieftec Dragon, even tho its considered the ultimate 1999 case, just because it's this big as well.

Guys, I need your input on something. Absolute ultimate 1999 PC if I decide to go for that would be using some op parts released in late december 99 - either Intel OR840 motherboard or Compaq Pro Workstation AP550, with dual PIII-800EB and gf256 ddr. Thing is, there just happens to be one Compaq AP550 listed locally for just 25 euros and i should probably nab it while I can, but, it comes with a single PIII-1000 and it lacks the VRM module needed for installing 2 CPUs (a small slot at the very top of the motherboard). If I try to check on ebay for compaq ap550 vrm module, nothing comes up, but if I just type compaq vrm module, I see some results for one for different compaq proliant 800 server, that looks pretty much identical visually to the one that I do need here. Would it be compatible, or will I kill the motherboard if I try it 😀

there's also this vrm module from compaq proliant ml370 server that looks even more identical to the ap550 module:

I'd grab it if you can. If I'm remembering correctly most of those vrms are interchangeable.

Good to know, I'm taking it then.... geez, this thing looks heavy, even tho it's not far, delivery gonna kill me for sure... oh well

So, my other question, can one of the cpus be s.370 model on a slotket, or do they both need to be absolutely identical?

Good to know, I'm taking it then.... geez, this thing looks heavy, even tho it's not far, delivery gonna kill me for sure... oh well

So, my other question, can one of the cpus be s.370 model on a slotket, or do they both need to be absolutely identical?

Technically they need to be identical, well same stepping to be be more exact.
Reality is on my Asus P2B-DS I ran 2 different P2 400's and apart from an entry in the event log it ran just fine.

I would think it would be the same for you as long as the slocket is SMP compatible (Not all are) and your running both a Slot 1 and a S370 800eb.
BUT
That's based on generic hardware, I've no idea how flexible an OEM system like Compaq will be. I'd give you a 50/50 chance at best.

Really though if you don't want 2 identical CPU's then a dual rig probably isn't for you.
I get not wanting 2 of the same CPU's cost wise but its like saying you don't want 2 sticks of matching ram in a dual channel setup, that's kind of of the whole point!