Here's another one of these threads, this time for building the coolest PC of year 2003. Now, thing is, in september 2003 some cool stuff came out like the first athlon 64 cpus for example, but out of those parts that I would need to build the ultimate 2003 PC that includes everything released by the end of 2003, I only own a hercules 3d prophet radeon 9800XT, and an audigy 2 zs platinum. Im having very hard time finding the best of the first athlon 64s and the best motherboard for it, but when I find them, I will build such a machine, in this thread.

For now though, what I can certainly do, is build the best machine for early 2003, as I have basically all I need for that. Let's set a time spot of March-April of 2003 and see what kind of parts were the best at that time. First things first, we need a nice case to build in, and I have this Antec SLK3700AMB: 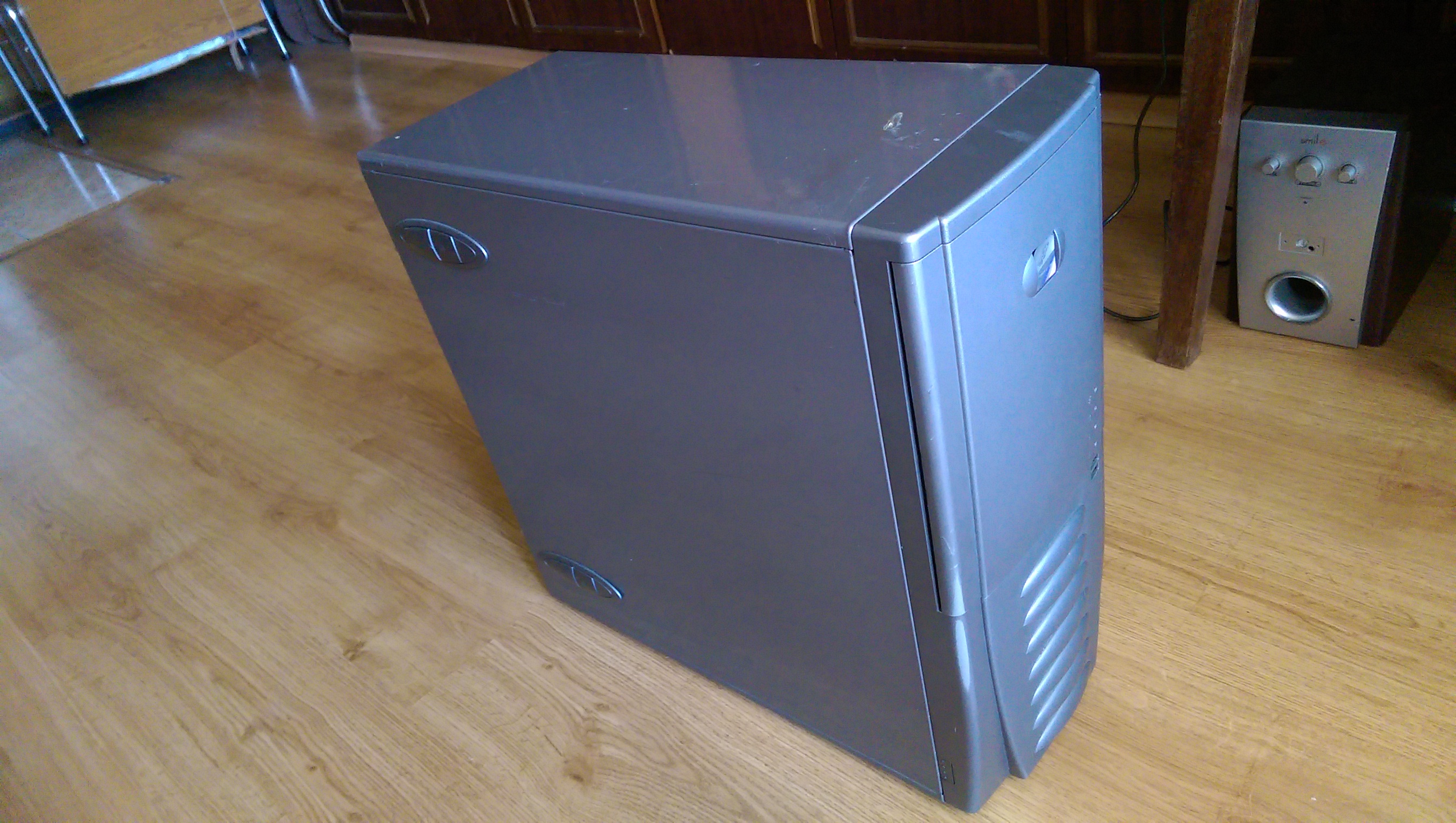 Pretty good condition, but as a small issue with it, I spilled a little bit of superglue on top, now I have no idea how to clean it off without destroying the paintjob 😒 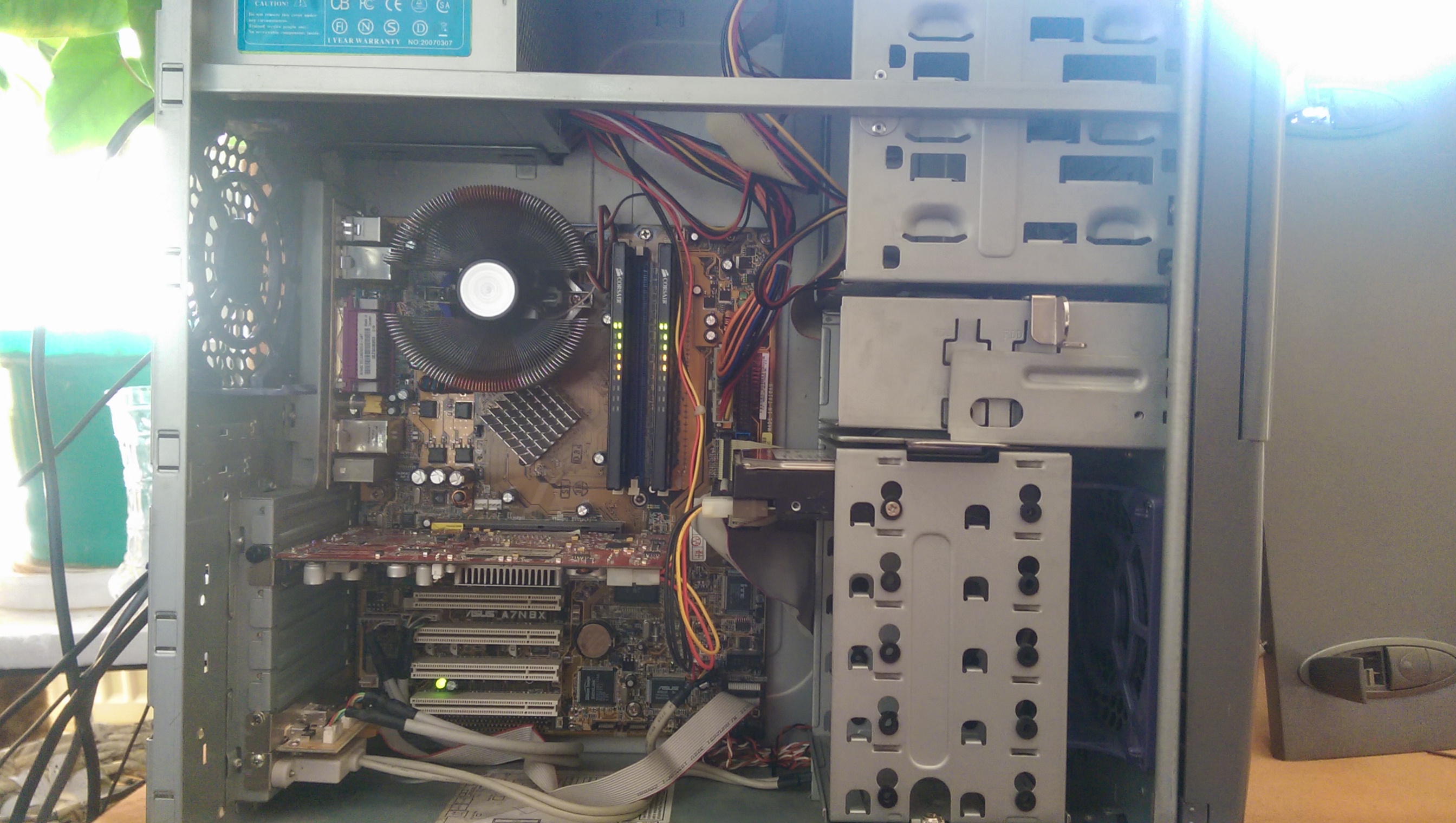 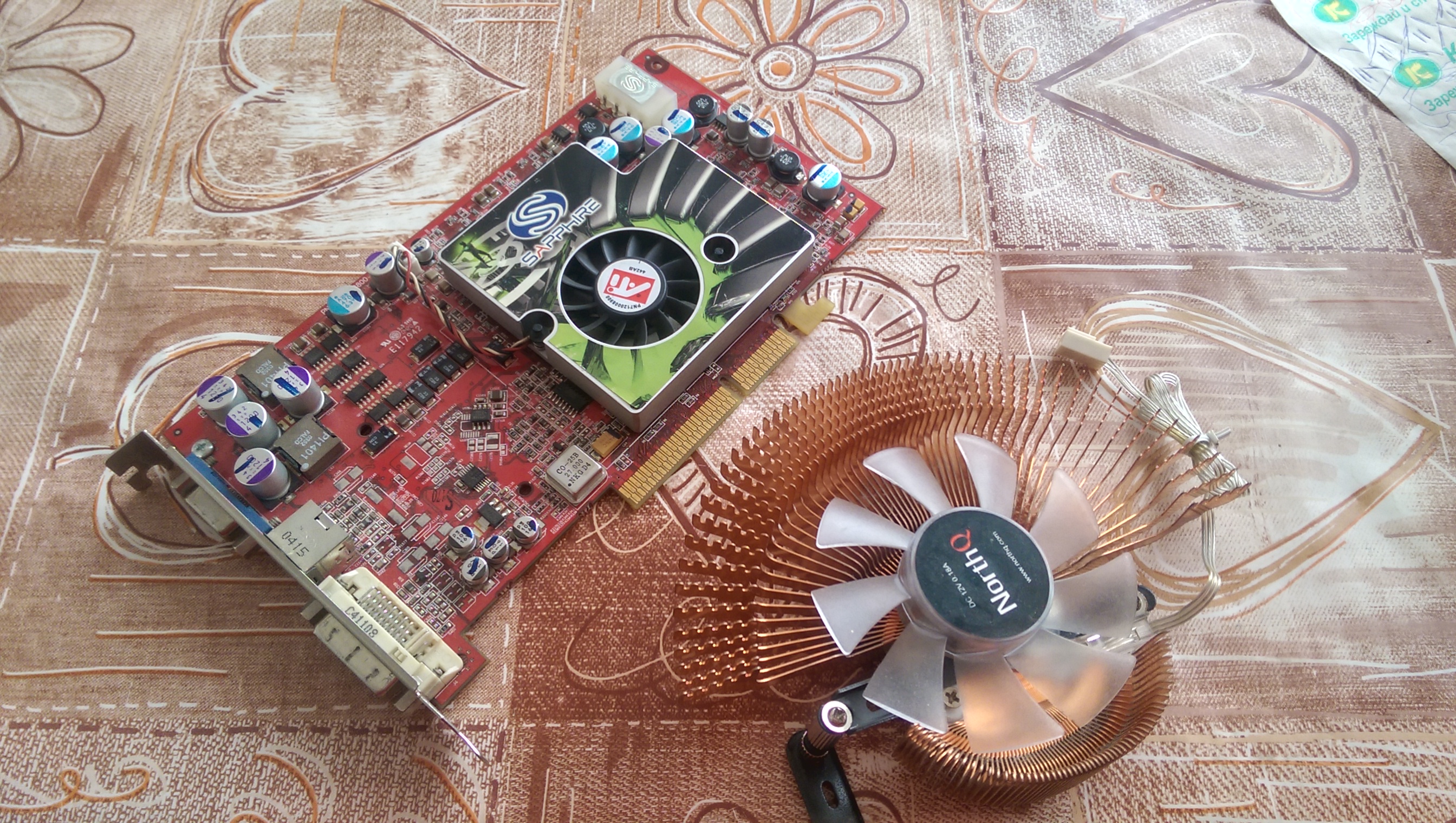 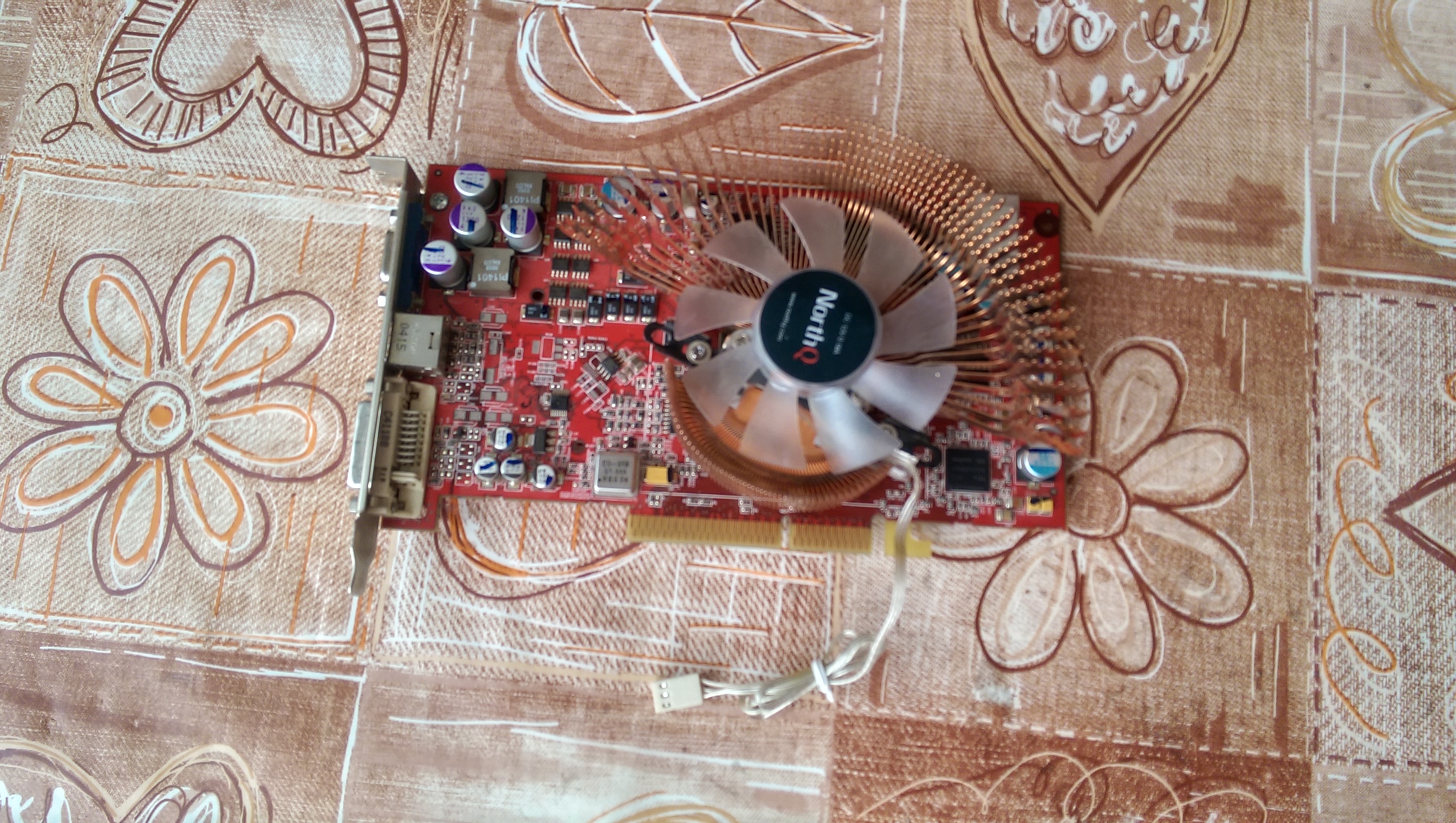 I upgraded it with this random chinese gpu cooler I had since the og cooler didnt seem to do a good job at keeping it cool. I will not be adding a sound card, an Audigy 2 would be correct but I really wanna hear what the onboard nvidia soundstorm audio has to offer, supposedly it can do some 3d sound and eax 2, and is also same audio solution as in the og xbox.

As I said, the athlon xp 2800+ is 2nd best cpu of that time, the best was the 3000+, Im currently bidding on one, hopefully I win it. For storage I will want to use the then brand new WD Raptor 36gb 10k rpm hdd as system drive, I already bought one but it hasnt been delivered yet, and for game installs the best consumer hard drives of the time WD Caviar SE 250gb, and I just received delivery for one today, factory sealed too 😀 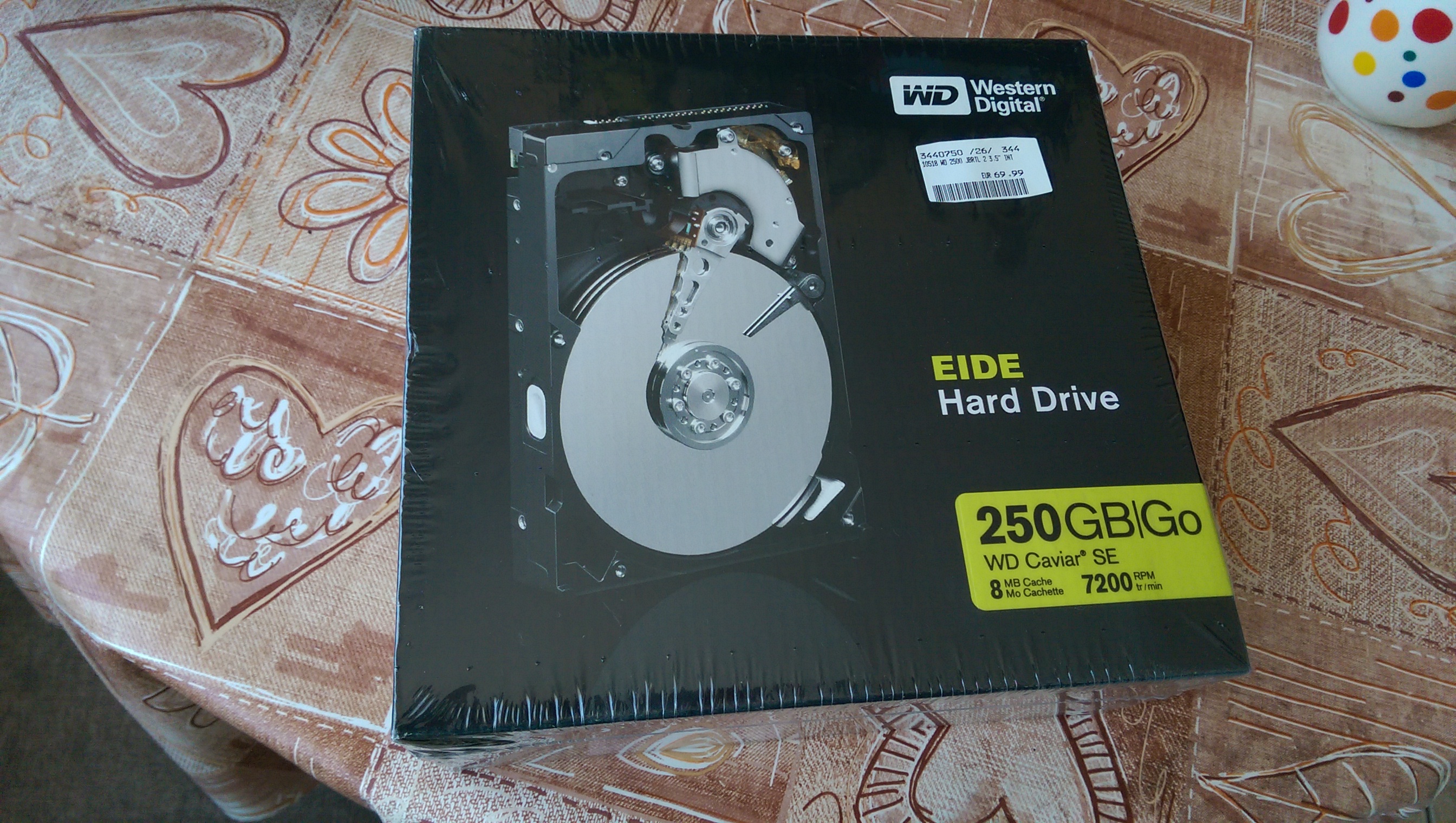 Sadly after unboxing it I found out its a newer revision from 2007, but its still same model so I guess it counts. I will probably want to have four of these, to fill up all the available 3.5" slots on the case, which also means I will need to add an extra ide controller. I won another used 250gb caviar se on ebay for very cheap, but Im having some trouble with the seller, he's complaining something about the delivery address and tells me to fix it, but there shouldnt be anything wrong with the address as Ive received hundreds of items on this address, and the guy is german and doesnt seem like he speaks english, so google translate is not helping me much.. maybe some of you will know german well enough to help me out deal with this guy?

Finally, for power supply, I won't be using this cheap delux from the photos above, of course, I have the original Antec SL350SP that was bundled with this case, and is apparently a very good unit, just with crap caps, a friend is recapping it with japanese caps for me right now. I also have another good 2003 unit, Enermax... EG... 375? something, it has japanese caps from the factory, its currently in use in another build but I can move it here if the recap of the antec unit fails.

p.s. forgot to show off the hercules 3d prohphet 9800xt, here it is, I wont be putting it to use till after I find the damn athlon 64 board to pair it with 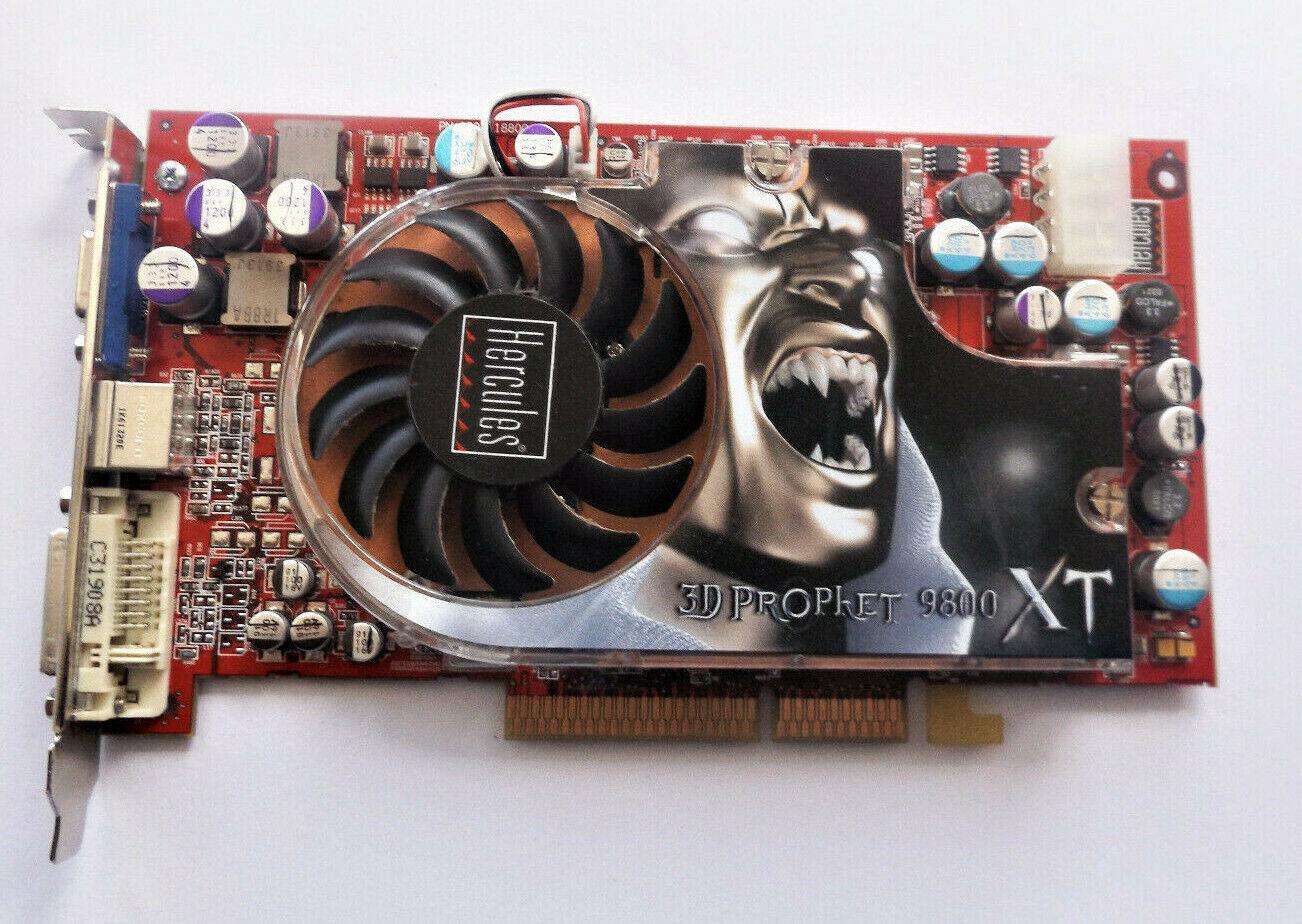 well, there was in fact something even better than what you just mentioned, and is what I'm looking for right now, seems to be really, really rare tho, and I'm not sure if it's a good idea to mention it right now, as I'll probably just increase my competition when one shows up 😉 Just as a hint - socket 940 😉

I'm also planning what is turning out to be a 2003 era build (don't worry, not socket 940) so I'm looking forward to seeing this build develop.

Good luck with it.

That's one of my favorite eras of computers and games. I'm very much looking forward to seeing you build this system.

I already have what I describe as the pinnacle of socket 754 and plan to do someday a big comparison to see which platform is better:
Athlon 64 3400 Venice core
Corsair 2*1gb CAS2 with silver heat spreaders
WD raptor 74gb
Abit KV8 PRO chipset VIA KT800 PRO; NF8 PRO chipset NVIDIA NFORCE3 250gb; NV8 chipset NFORCE4 4x
Geforce 6800 ultra PCI-express. The only thing missing is the AGP version of the video card which is very rare and expensive. If not possible I will use the geforce 7600gt which has near identical performance because I have both the AGP and the PCI-express versions.
The system with the KV8 PRO is fully assembled and is one of my favorites: it plays even the most demanding games up to 2004 with over 60 FPS and is compatible with every old one including Panzer General 2; Diablo hellfire and so on. I can set the CPU multiplier in BIOS to 4X and get a 800 MHz processor which is perfect for some of the oldies. Windows XP flies on such a machine; the only problem is the internet which is very heavy for a single core today.

I considered period correct machines but ultimately I decided that what Phil names as "time machine"is much more feasible and more fun for me. For example finding period correct hard drives in good working order is really really difficult; I was lucky with that Raptor but otherwise the hard drives are newer than the rest of the components. I choose to build end of era machines that reflect the best possible components available on a specific platform and because I am an Abit fan I built all of my machines around an Abit motherboard: for socket 462 that would be Athlon XP 3200 with Abit AN7 or KW7 ; for socket 370 that would be Pentium 3 1400s with ST6 or VH6T and so on. What I hope to do eventually is to make a comparison between the different platforms on the same socket - VIA, NVIDIA, Intel - and between end of an era machines: Pentium 3 1400s vs Athlon 1400c; Athlon 64 X2 4800/FX-60 vs Pentium D 960/965.

I know RGB lighting is all the craze but personally I like copper heatsinks and load based ram lighting.
its bling but with a purpose, in theory at least.

Had a job where I could get hardware at cost so built 2 PC's based off that very motherboard, One for my brother and the other for a mate.
Graphics would have been GeForce FX of some kind depending on budget. Can't remember which CPU's but 2400 seems to ring a bell for at least one of them.
Brothers didn't seem to be as reliable as my aging Gateway Slot 1 PC but that may be down to drivers not been as mature.
Not sure about my mates, I only ever visited when he was having parties where booze and girls (somewhat stupidly in that order) more then his PC. 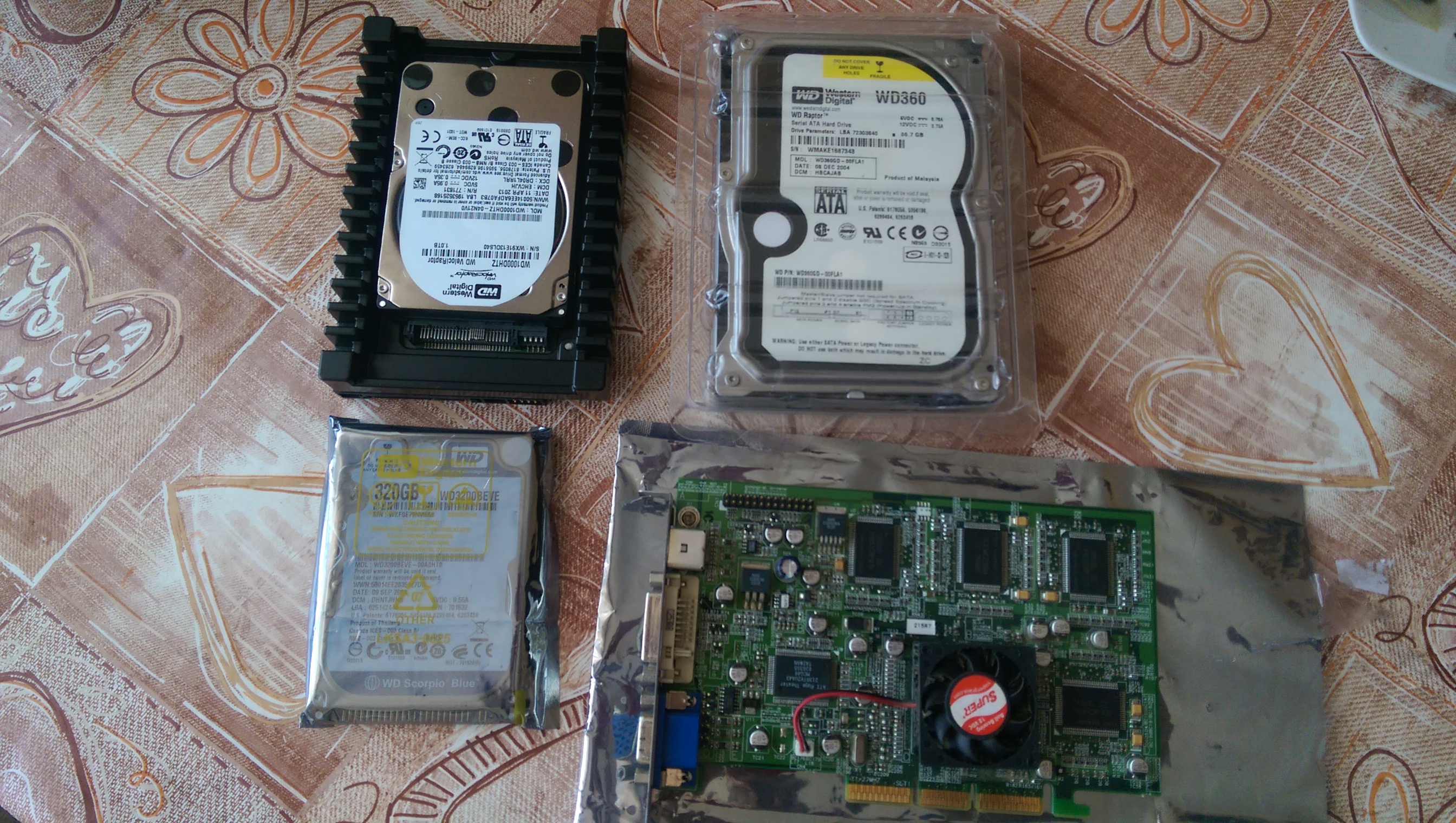 some ebay stuff got delivered today, among them a WD Raptor 36gb, first model of the series and fastest hdd of 2003, I'll use it as the boot drive in the 2003 build. I'll probably dualboot win98se + win2000, might also try to add winXP SP1 for the heck of it, as it was available back then, but I don't expect it to be as good as win2k, XP really got good after SP2

You really are serous about period correct.

First generation Raptor should be avoided.

Why? They have a design fault or something? Still, that doesn't explain why seller had it marked as "used" instead of "not working"

From what I saw, they aren't very reliable. They also use IDE interface internally, with Marvell SATA bridge, which may lead to problems too.

very nice, I have very found memories of the era with this sort of setup, AXP+nforce2+radeon 9500/9700/9800 was the way to go for performance vs price for some high end gaming,
but, 2GB makes no sense in this context, also I don't think any game that runs well on this PC will benefit from more than 1GB. 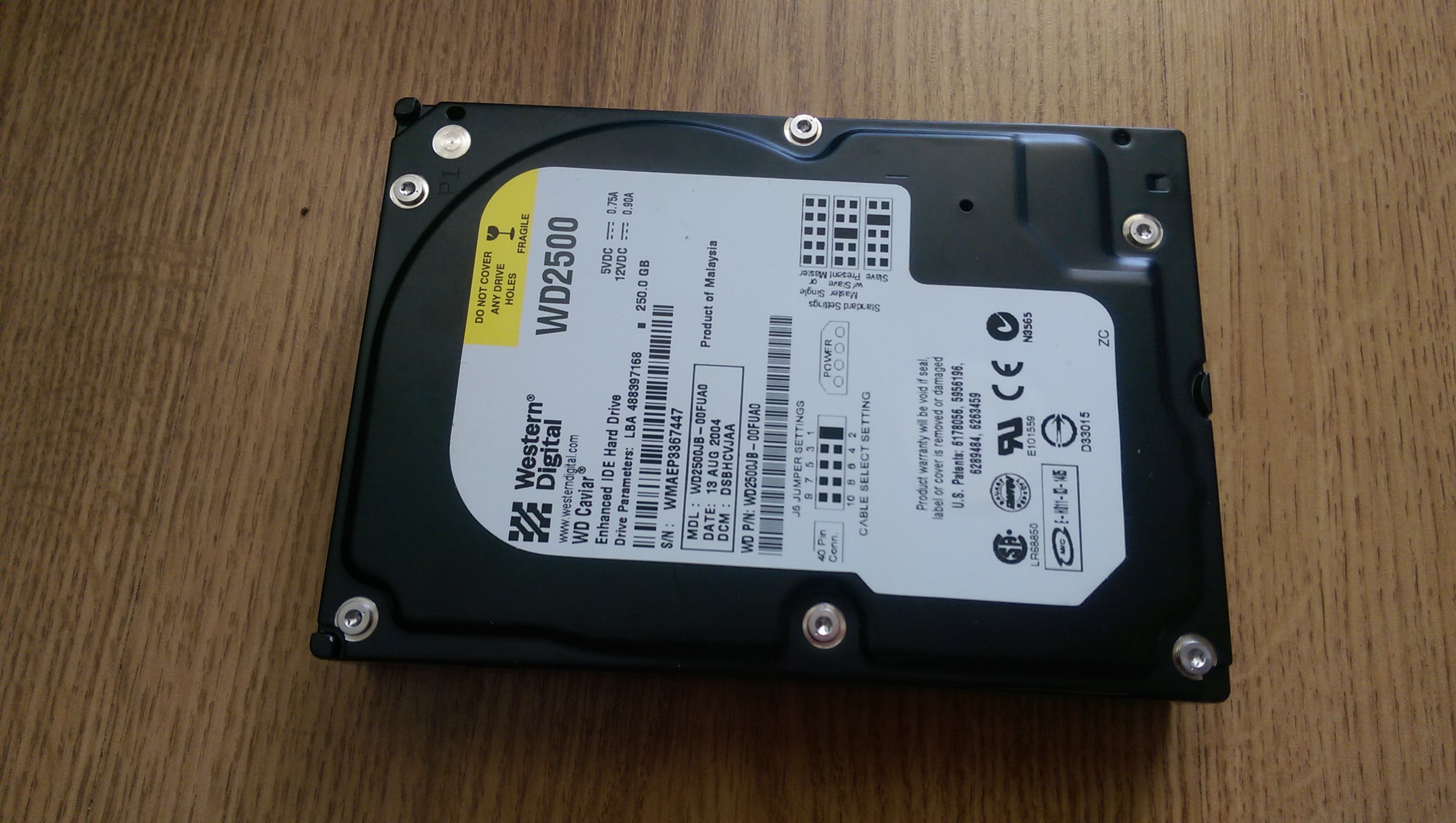 Heres one more WD Caviar SE 250gb, this one is a bit weird because it doesnt say "SE" on the label, but I tested it just now and hard disk sentinel detects it as Caviar SE and detects the correct 8mb cache. This makes two WD2500JBs, I need 2 more to fill all the 3.5" slots, and an extra ide controller for the other 2 😀

As for the 36gb Raptor, seller admitted he didn't test it before sending it, looks like he will agree to refund me. After that... guess I need to buy another, but this was the cheapest one on ebay, all the other 36gb raptors are quite ovepriced 🙁 And yes, even after now learning these have reliability issues, I still want to experience a (working) one in this machine, for as long as it works, and when it dies I can then replace it for like a scsi hdd or a regular 7200rpm hdd, but first I really want to experience what a working 36gb raptor feels like 🙁

As someone who's had 5 36gig raptors in raid 5 back in the day you really need to get one. Sure they can have issues but they were fast drives. 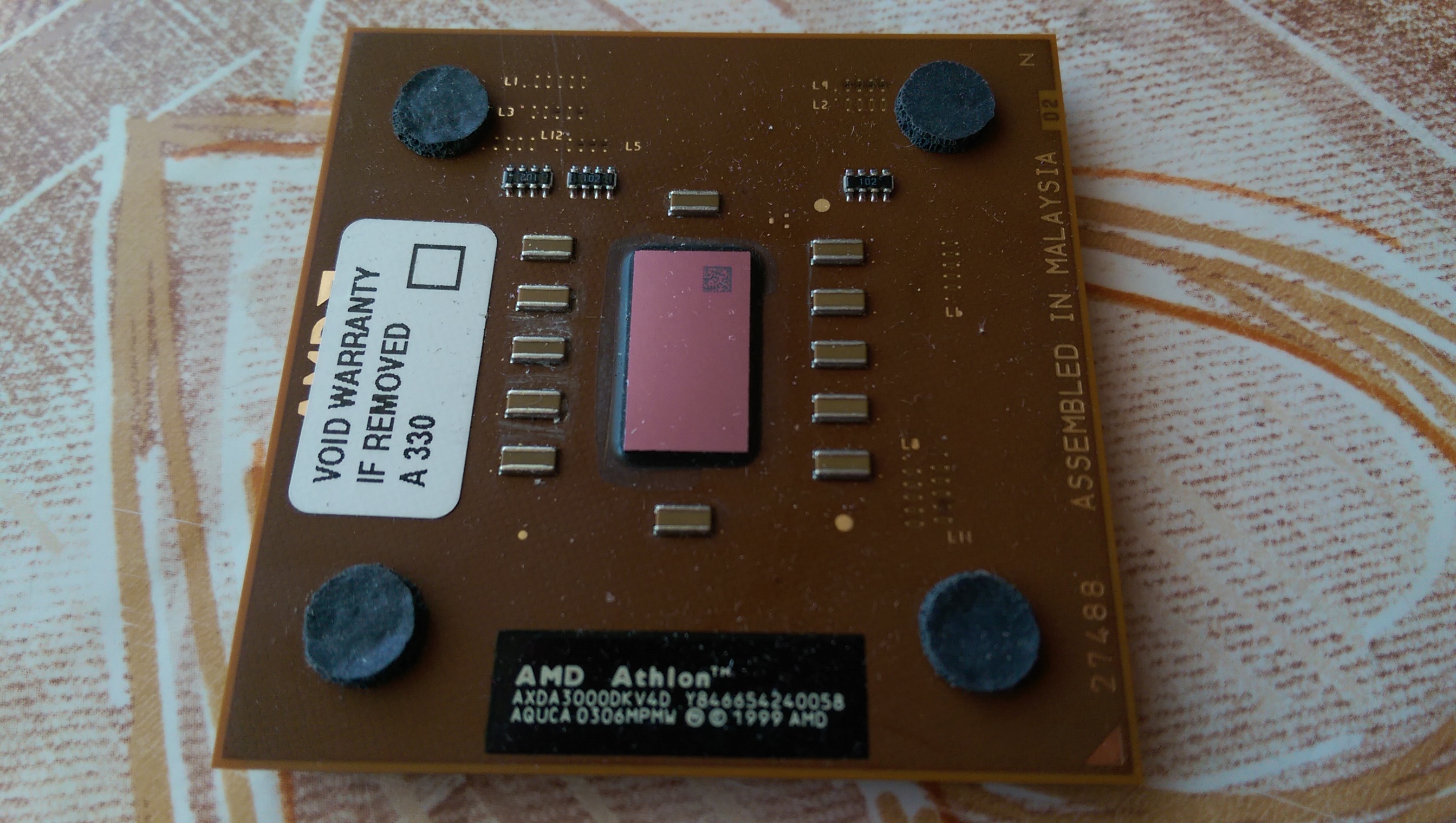 Also 3000+ has higher multiplier than 3200+, which should mean more overclocking potential, we'll see 😉

I think a higher multi is relevant only if your multi is fixed, and you have:

Otherwise, if you have an early built cpu and a good OC mainboard, then it does not matter if your multi is higher or lower.
At the end the stepping and cpu lottery rules...