I'm not sure if I am alone in this, but I have many different cases, PSUs, optical and floppy drives and when a new build springs into my mind all the cases and PSUs and drives are all in the wrong case and I get disillusioned with the whole build before I even start given the amount of drive, PSU and HDD swapping I would have to do to make it a reality. And I only have like 6 cases, 4 PSUs and less than 10 optical drives, so certainly not a "collection"!

So then came about a project to create one multi-purpose chassis that can take a wide range of retro builds so I no longer have to faff around with. To achieve this I wanted to spruce up my least favourite but quite functional case and give it a new lease of life.

Here it is just after I bought it two years ago. I cleaned it up from this grim state and then used it like that for quite a while.

I drilled a whole up top for an AT PSU button, and made a mess of it, and also at some point tried to drill some holes / slidey mounts for plastic motherboard risers you get on AT motherboards, and made a mess of that too. This is a shame as it has some holes for standoffs for AT motherboard but nowhere for the plastic risers you get on boards of this age to sit. Until I realised you could get plastic risers that sit on the chassis rather than go through the chassis. So the case definitely needs a new lease of life; think of it as like LGRs old windows 98 PC that he turned into the Lazy Green Giant or whatever it was.

So anyway I stripped the case back as much as possible and started installing drives for maximum compatibility from, I dunno, 1990 to 2010 PCs. I've got here: 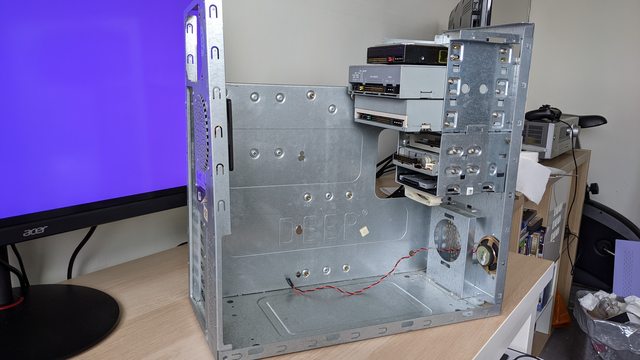 Anything newer than 2010-ish (no IDE) can go in my other modern case, or won't need a DVD drive at all (which I do if I pick up more unusual modern hardware and bench mark it, like an AMD 7860K APU I got the other day). 80GB is plenty big enough for a regularly swapping XP PC and older DOS PCs I use CF cards either directly plugged into the motherboard or around the back of the case.

The PSU is fantastic. It is a Seventeam 350Watt model that has many molex connectors and a floppy connector, a couple of SATA connectors, 20+4 pin and 12v ATX connectors. It has a -5v rail and can do a respectable 25a on the 12v rail. It's also silent as it has a 120mm fan. I'm quite happy using this power supply on PCs from a 386 with SB 2.0 to a Socket 775 PC.

By new "lease of life" I mean paint, which generally goes poorly for me. This was no exception... the end result *please squint to avoid blinding by brightness*

So yeah, VOGONS colours. I know it's hard to see because it's so camouflaged with the rest of the webpage colour scheme, but look and it's there 😜 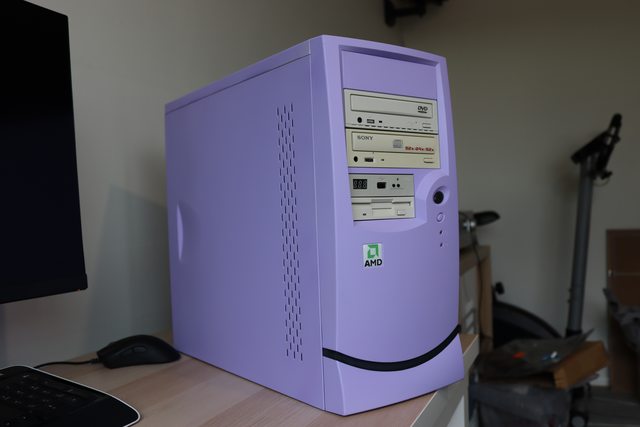 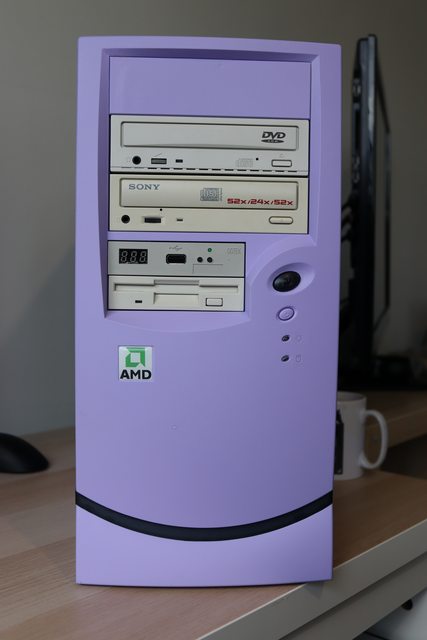 I bought a couple of case stickers on eBay. I had the choice between that old AMD logo, a Windows logo (the Windows 95/98 and maybe ME? one), and a Via EPIA logo. I quite like my VIA EPIA board but not sure it was a good fit for this case given the size of it compared to the ITX via board.

For its first build, I thought I'd try Socket 478 as I haven't used a late 478 PC in ages. I bought a motherboard with AGP x8 and support for 800MHz FSB CPUs and dug out my 3.4GHz Prescott - luckily it's pins were all fine considering it's been in storage for at least 2 years. We'll just pretend that I didn't minutes before stick an AMD sticker on the front... 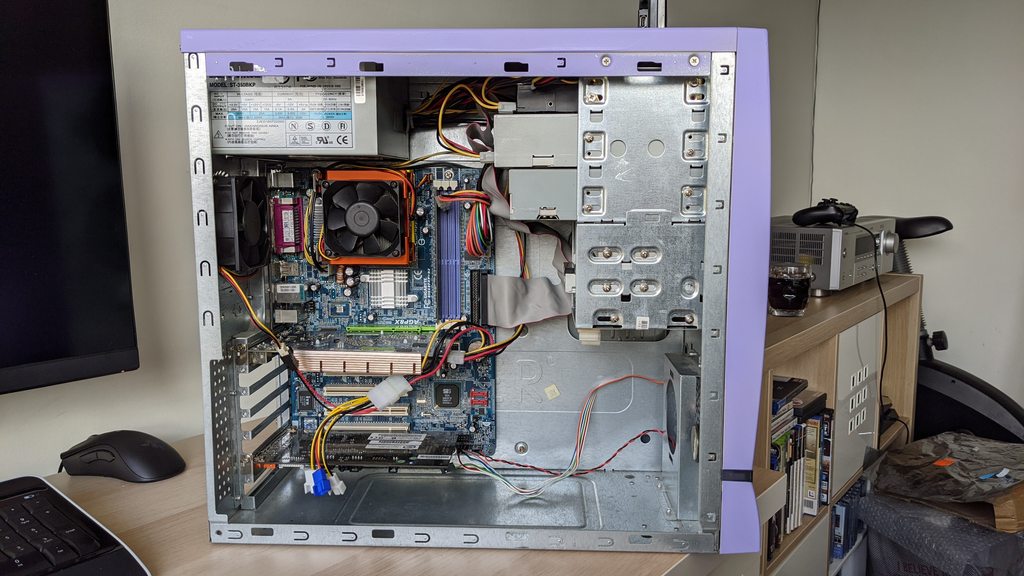 I've dug out my 7600GS AGP card and the Audigy 2 ZS. I've only put 512MB of RAM in there as to be honest I need to test my collection properly so might well use this board to do that. The next build will probably be my 486 with a SB2.0 and I will only have to swap out the

Anyway I now have a VOGONS coloured PC 😁

I dig it! Not because of Vogons' colours but because it's a really cool alternative to beige. Awesome!👍

So yeah, VOGONS colours. I know it's hard to see because it's so camouflaged with the rest of the webpage colour scheme, but look and it's there 😜

i'm a fan. thats a cool paint job for sure.

Excellent paint job! What kind of paint did you use and how did you prep it?

Why not printing Vogons logo (transparent background, white letters) and attaching it to the front?

Haha I love it, the grey seems to match nicely, that paint job looks good from here. You could probably get matching Windowblinds for the desktop too:

Excellent paint job! What kind of paint did you use and how did you prep it?

I used Liquitex spray paint straight onto the old paint. I think it came out better than when I go full prep! All I did was thoroughly clean it under the outside tap with elbow grease and normal soap and left it a few days to dry in the garage.

I was originally going to go for a very light green but all the online shops / brands had sold out.

Why not printing Vogons logo (transparent background, white letters) and attaching it to the front?

The AMD logo is one of the rounded, thicker ones that are a few mm high rather than a thin sticker, and I wanted to keep it quite minimalistic and small I guess.

I now have an excuse for an interesting AMD build. Not a fan of Socket A but I might try 754 which I never messed with.

Reminds me of the purple on some of my Sony Vaio's too.

After watching Phil's video I finally decided what I wanted to put in my case: My 386 and SB2.0 / CMS card! 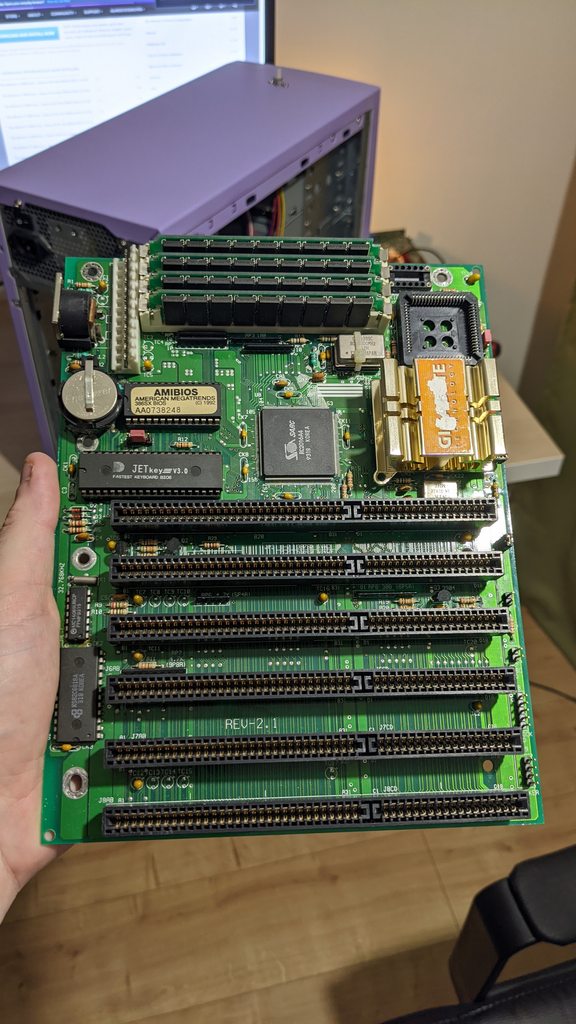 It wasn't quite as smooth sailing as I thought as the top HDD was in the way of installing the AT power switch.... one quick swap of the SSD and HDD and the AT switch is now happily installed. I took the opportunity to swap the CD and DVD drives around so my IDE cable was more likely to each the HDD and DVD drive. However this doesn't break compatibility with any other builds and I don't have to un-swap it out or anything. The AT switch can just stay there.

But otherwise I just put the standoffs in the AT places and put one plastic stand off thing and it was good to go! 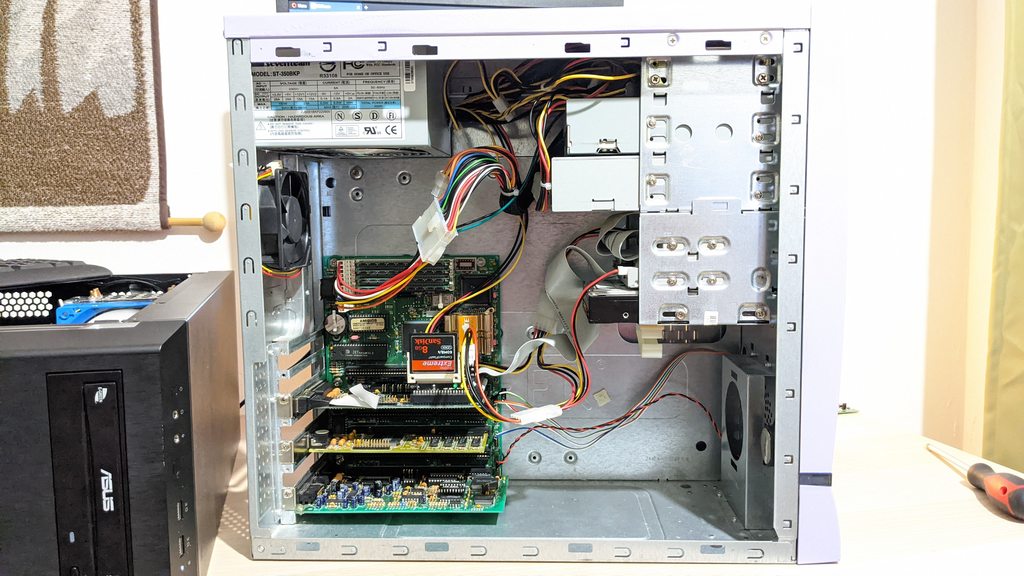 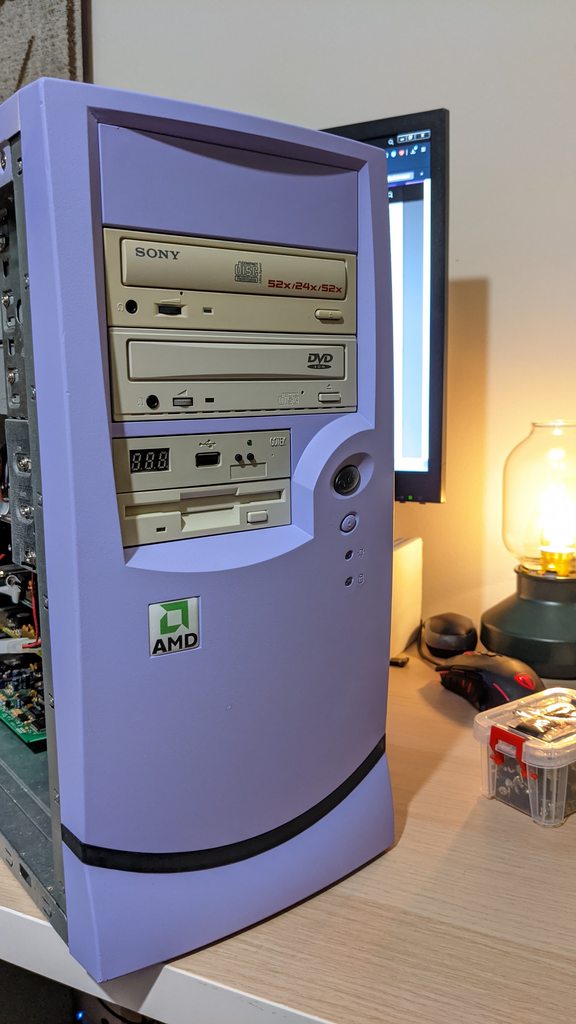 But now has a silly hat / nipple 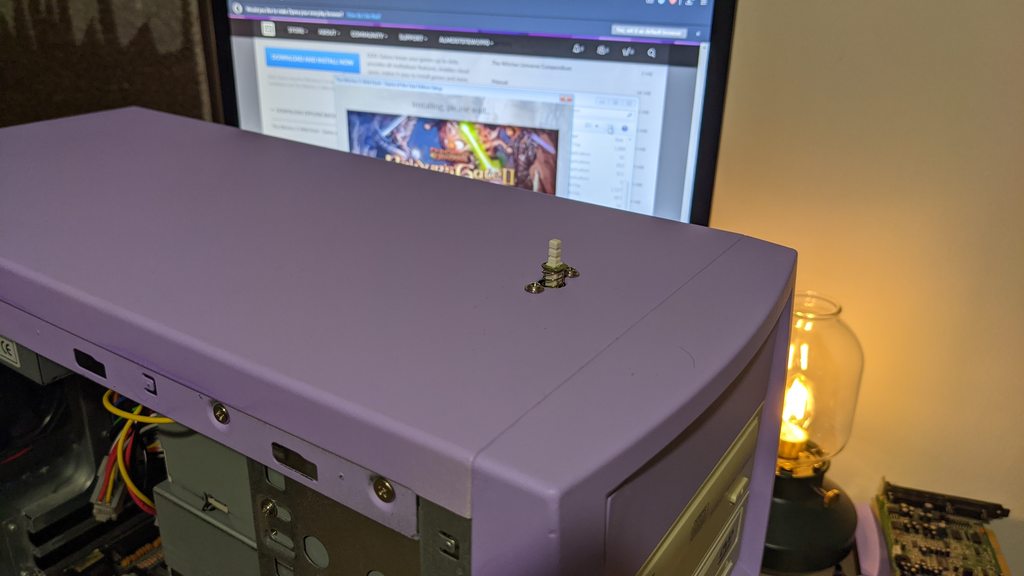 Looking forward to being able to have a DOS PC live under my desk rather than on top in the way!