Brand new Siig Minitouch PS/2 arrived. I also have some custom blue arrow keys on the way for it. 😀 If that SIIG Mini is from eBay, I had it bookmarked before it sold. 😀

I've been looking at one of those keyboard( Small and beige! ) for my Raspberry Pi. I have a USB to PS2 adapter which works from my testing.

I guess that's a good one to follow up with this ^^

You don't see these very often! What kind of system do you have that supports 8" floppies?

On my 486 I didn't get the Diamond Stealth 64 Video Vram to work. Well, guess I've got some new testing on my hand. Received this CDROM today, and it's supposed to contain the correct drivers.

When I get to testing I'll put the contents on my Dropbox and post on the Vogonsdrivers thread.

If that SIIG Mini is from eBay, I had it bookmarked before it sold. 😀

I've been looking at one of those keyboard( Small and beige! ) for my Raspberry Pi. I have a USB to PS2 adapter which works from my testing.

It is. It was only up for sale for about 45min before I grabbed it.

I guess that's a good one to follow up with this ^^

You don't see these very often! What kind of system do you have that supports 8" floppies?

I've been looking to get one for quite a while now, and it's the first time I saw one pop up for a reasonable price, still have an old 8" floppy here from my dad I'd like to know what, if anything, is still on there ^^
and I'm just interested in all kinds of drives in general.

been reading up on them for a bit now, and this Tandon TM848-1 seems to be a relatively "modern" 8" floppy drive if you can even call them that ^^ (the manual is dated '81)
it uses a shugart interface, so should be compatible with most floppy controllers anyways, just needs to be adapted and a 24V power source.
http://classiccmp.org/dunfield/img47321/cnct.htm

I don't know if it works yet, it needs a new drive belt in any case before I can try, but seems to be in very good condition visually otherwise.

but I also got another drive at the same time, a Mitsubishi M2896-63-02M from '86 which is direct drive, so no worries about drive belts and should be able to do double sided.
still waiting for that one to arrive.

I hope to get at least one of them if not both to work 😀
the Mitsubishi also includes a 50pin to 34pin adapter already that's hopefully going to make things easier.

I'd still want to get my hands on a full height drive some time though eventually.

Picked up a Leadtek Winfast A250 Ultra. Didn't have the Full cooler like the original. I also had a Passive Zalman Cooler BNIB so i proceeded to fit that. 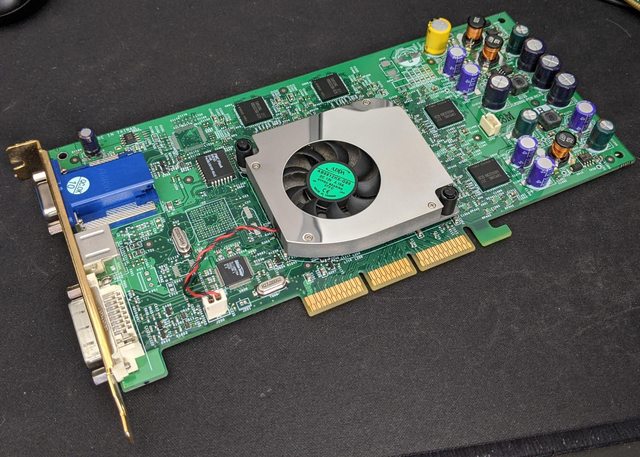 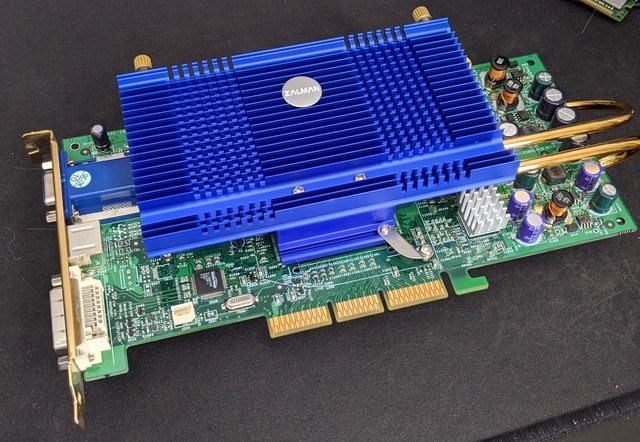 Amazing to think about the capacity difference! It's funny how comparatively small the transfer rate improvement is though.

You're probably looking at least 20 hours of solid maxed out writing on the 16TB drive... Likely much longer (days) with real world data and lots of little files.

Compare that to the 80MB drive. Docs anyone online estimate .625MB/sec transfer rate max. If that's even remotely close you're only looking at 2-3 minutes to fill the drive. Even if it gets over tenth of the advertised speed, 20-30 minutes to fill a top of the line drive versus 20+ hours is amazing. Also, I guess that drive was $750 back in 1988... that's like spending $1600 on a hard drive in 2020. Maybe it'd be better to compare it to some insane enterprise level SSD?

Nice ! Super clean looking. I found a Chicony KB-2961 beige PS/2- AT compatible at a SA store earlier this week for $3 so had to grab it, not a swtch type but rubber domed, still a good working KB.

Thanks! You are absolutely correct, it's striking how storage read/write performance has not kept up with capacity. When I play with these old MFM drives, it only takes a few minutes to fill them up. Even something as intensive as a level 5 Spinrite session takes a couple of hours at most. Fast forward to today, just doing one bulk physical read pass of the 16TB took just shy of 19 hours (good guess!). I have eight of these I'm burning in before building a new storage server, and I expect it'll take until next weekend before it's done.

I suppose the trend has corrected in the last couple of years. My main desktop has a 2TB PCIe 4.0 M.2 SSD which has a bulk transfer rate around 5GB/sec; ratio wise I suppose that's in line with the early days of desktop hard disk storage so perhaps we're back to where we began.

Anyone know what the J4 and J7 jumpers are for?

Nice and super clean ! Is that one with those hybrid plastic+metal liner case tops ? Have seen those before on Unisys and some other older good OEM computers. Internally very good, only quirk is some occasional patina (yellowing) on the lid that does not match the front, but yours looks great.

Thanks. Yes very similar in design to my AcerAcross system but full AT. The yellowing will be easy enough to remove.

Got did of the yellowing by using suger soap, a mild cleaning abrasive called "Jif" and a mild nylon souring pad(scotch brite). Removed some of the scratches as well.

Won this motherboard on ebay the other day although I am having trouble finding its ID.

Only found 1 listing online which referenced a bowling machine.

Lucky it seems the jumper settings are all on the board.

Lets hope it didnt mind being on what looks like a throw or carpet.

Those are always nice to have in stock 😀
My guess for the jumpers is to set pal/ntsc. Maybe also to set is the memory sockets are filled.

Picked up a Leadtek Winfast A250 Ultra. Didn't have the Full cooler like the original. I also had a Passive Zalman Cooler BNIB so i proceeded to fit that.

Now it looks just like mine!
The original cooler on mine was failing, so I sent it in for replacement and they sent me a cooler similar to yours, after which I also decided to get this Zalman cooler. That was several years ago.

Thanks, spot on that I think!

Looks like I have real cache and not the fake cache one.

So, as promised earlier, here are my recent purchases. Usually I don't care too much about stuff being new in box, but I wanted some optical drives that would actually work so I decided to get some NOS ones. For the Sidewinder I preferred a NOS one because I can be sure it's not worn out, and the sealed copy of FS2000 was a welcome addition to the Sidewinder.

I purchased a Compaq Armada 7792DMT laptop the other week. It was listed as spare/not working but the picture showed it powered on to Windows 95 and it was very reasonable priced. The laptop arrived today and overall its a really nice example, although its going to be a project as not everything is right with it.

I would like to get the FDD Working again so will try and inspect it and see why it doesn't read disks. Its will seek at boot and will start to spin when the disk is inserted but just won't read. I need to find the CD-ROM module. I think this is going to take a while but my search begins. Are batteries still available for these units? It's the original battery that's installed. Is it possible to rebuild these with new cells?

Does anyone know if there is a repository or where i could get the SoftPaqs for this laptop? I'd like to try and get the install fresh but using the compaq image. Any help and advice on this would be greatly appreciated. I don't have much experience when it comes to Laptops of this era. I think it will certainly make a nice retro laptop for some dos gaming. 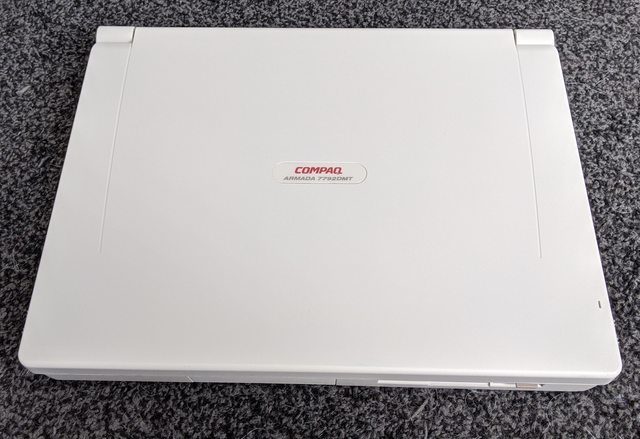 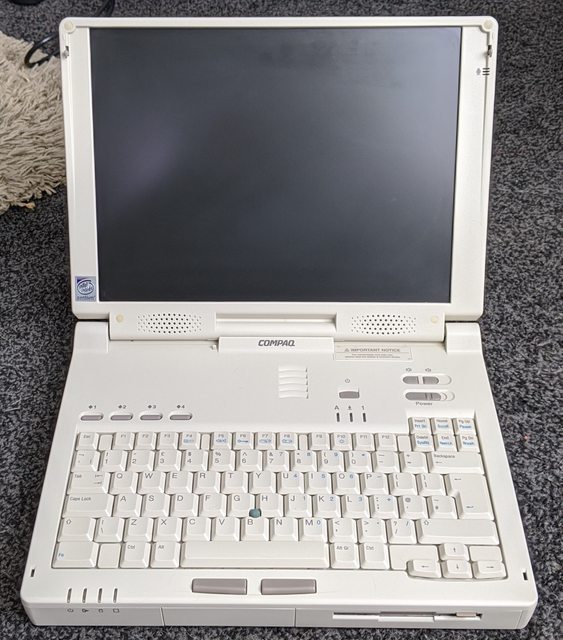 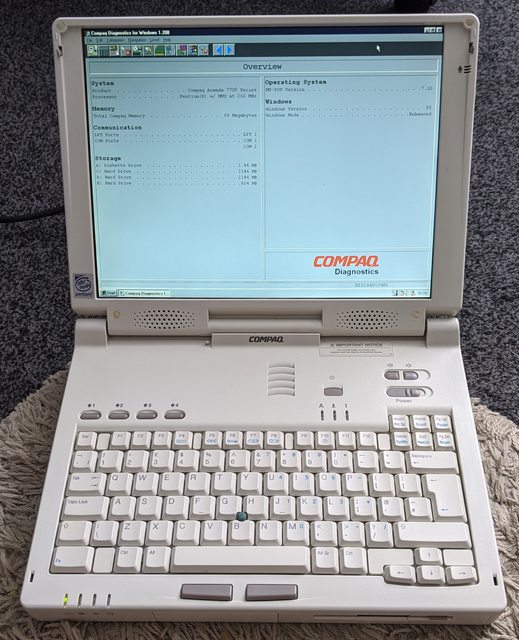