In amongst the pile of pcs i bought last week is one with an at motherboard and a 200 mhz processor. Took it apart for cleaning and marked on the back of the board is Elpina BA E-VO 9812.

A google suggested elpina is a pc chips board, but that number doesnt come up with any search results. A search through elhvb.org found me a PC Chips M571 picture and manual, it looks like the board layout but it isnt listed in the "also manufactured as" - is it likely that a very similar board would be in existence or is it pretty likely that it is this one?

Elpina is indeed one of the many pseudonyms for PC-Chips, Amptron, Hsing tech etc etc

That would explain why Elpina DDR2 ram is so terrible! Seriously. Every consumer grade DDR2 machine with bad ram I run into it is bad Elpina ram.

That would explain why Elpina DDR2 ram is so terrible! Seriously. Every consumer grade DDR2 machine with bad ram I run into it is bad Elpina ram.

You must mean Elpida, a completely different entity. I've run into their DIMMs from time to time, but without issues.

But yes, Elpina is PC Chips in disguise.

Without having done any research other than a 1 minut Googling and looking at and testing probably 100+ motherboards using PC Chips designs this is how I think it is.

PC Chips is the in-house brand name PC Chips Group used for many of their motherboard designs, they also sold those designs to other companies. Hsing Tech Enterprise was their in-house manufacturing plant that also made boards for some of those who bought PC Chips designs.

Elpina was a contract board manufacturing company that among other components made motherboards for other companies. During the late 90s I guess Hsing Tech couldn't keep up on their own so PC Chips let Elpina make many of their boards and probably also boards for some of those who bought designs from PC Chips.

Some of the PC Chips Slot-1 designs made by Elpina really suck but I doubt that has anything to do with Elpina or even very much with PC Chips... Some of those early cheap (non Intel) P6 chipsets were just god-awful regardless of who designed or made the motherboards.

Some of the PC Chips Slot-1 designs made by Elpina really suck but I doubt that has anything to do with Elpina or even very much with PC Chips... Some of those early cheap (non Intel) P6 chipsets were just god-awful regardless of who designed or made the motherboards.

I beg to differ. The early ALi, SiS and Via P6 chipsets were generally pretty slow, particularly in terms of memory performance, compared to Intel's chipsets, but on a good motherboard design they were rock-solid and could offer features Intel didn't at the time (ATA-66, that sort of stuff). When decent motherboard vendors used them, the boards were fine. I remember the MSI MS-6163VA ((Via ApolloPro+) which compared favourably to the MS-6163 (i440BX) except in terms of raw performance.

These chipsets - and many of the more exotic late So7 ones - got a bad name specifically from the abysmal cheap, buggy, unreliable motherboards with badly tuned BIOS that they were sold on, and the PC-Chips complex was one of the prime guilty parties there. The only chipset that really was unforgivably bad was the Utron UT501x (and anyone trying to run the SiS 5591 at 100MHz FSB would also get upset- but only PC Chips sold it as 100MHz capable...)

... The only chipset that really was unforgivably bad was the Utron UT501x ...

Hmmm, what motherboard(s) used this one? Google's failing me.

... The only chipset that really was unforgivably bad was the Utron UT501x ...

Hmmm, what motherboard(s) used this one? Google's failing me.

Admittedly, it could just be a driver issue: no PCI bridge drivers for WinNT/2k or Linux, and Win98 just using DOS compatibility. But you basically can't get any decent OS to run on this.

Of course PC Chips made it worse than it already was, they fitted the M559 with a 168p DIMM slot with 3.3V keying - but the chipset only supports 5V EDO DIMMs, so if you put a 3.3V DIMM in there, it gets fried...

Thanks for info. Would this be considered a better board for a P166 build than an Asus VX97 (currently untested) that I also have?

Here's a link with a table which outlines the various chipset "aliases" used by different manufacturers: https://www.hardwaresecrets.com/chipset-alias … -vx-pro-and-co/ (the list is not complete).

Speaking from personal experience, my first Socket 7 motherboard was based around the "VX Pro II" (the Utron UT801x) chipset. I initially paired that with a Pentium 166 MMX and, after upgrading the CPU to a 233 MMX, was a bit disappointed to see that my brother's 200 MMX was still faster than mine (his motherboard was based around the "VX Pro +" (VIA Apollo VPX (VT82C580VPX)) chipset.
There I totally agree that the Utron UT801x is not a very good chipset.

Thanks for info. Would this be considered a better board for a P166 build than an Asus VX97 (currently untested) that I also have?

Yep, that's an M571 alright. Its SiS5598 chipset determines what you can expect. If you use the integrated VGA, it will crawl, but with discrete PCI performance is similar to the SiS5582, which is pretty decent and in itself better than Intel's i430VX could manage. Big but though: Asus was the Rolls Royce of consumer board manufacturers in those days, PC Chips the Yugo.

I think it depends on exactly what you want to run on it. The SiS5598 can run at 83MHz FSB, supports normal SDRAM and can cache 128MB, the i430VX only manages 75MHz (unofficially), only handles very early SDRAM DIMMs and can't cache more than 64MB. If you intend to stay within the i430VX's comfort zone, go with the Asus. If not, try the M571.

Yeah, I had no idea that this existed... thanks for the info.

M592, right, that was that strange all-in-one Baby AT MB someone found a few months ago... what a curious product indeed.

There's also a table out there (which I can't find right now, of course) which lays out all the various names under which PC Chips / Hsing Tech products were rebranded.

Hello , sorry for bringing this back from the dead .

I recently discovered that i have two motherboards with the onboard sound chip SoundPro 1896V+ . I do not have the - Sound & game connector - and i do not know how it looks like and if i can find it . Does anyone have a clue ?

Ugh, Utron chipset spotted on that M559. J-TX98 has SiS 5598 and same applies to it as to the M571 discussed above, even if it's a subtly different board.

As for the connector, I might have one in a box somewhere, in which case I can look at pinout. Otherwise it should be doable to reverse-engineer it, at least for the line-out line. Just set up something to make sound, preferably with distinct left and right stereo, find ground (measure for continuity with a known ground pin somewhere, eg on the power connector), then touch the other pins one by one till you find the sound output. Once you know what GND, out left and out right are, hook them up to a 3.5mm jack and you're done 😀

I found the manual

but i still have no idea how it is . The audio part of the cable has jack inputs ? 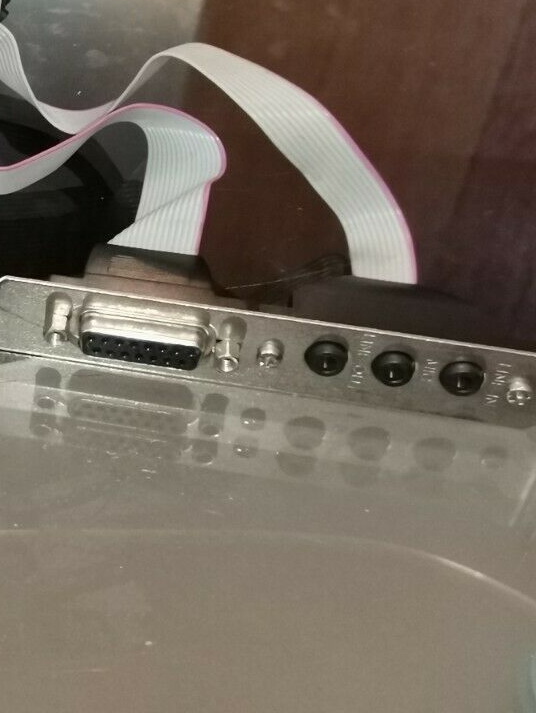