Over the weekend I made a DOS game for LDJAM50. It's a text adventure a la Zork and the like, using an 80x25 size text mode. For some reason aspect=true in the DOSBox config file doesn't correct the aspect ratio to 4:3 so the window displays the game incorrectly, whereas on a real PC running MS-DOS the game is correctly sized. Zork1 from GOG has the same issue, for example. Is there another setting that can be changed to get the desired result?

In 0.74(-3) the pixel aspect ratio of text modes is intentionally forced to 1.0 in order to avoid interpolation, because the interpolated symbols can look quite ugly on lower host resolutions depending on output method. However, with the prevalence of higher host resolutions now, SVN does correct the aspect of text modes. To summarize, use an SVN build to get aspect-corrected text. 😉

In 0.74(-3) the pixel aspect ratio of text modes is intentionally forced to 1.0 in order to avoid interpolation, because the interpolated symbols can look quite ugly on lower host resolutions depending on output method. However, with the prevalence of higher host resolutions now, SVN does correct the aspect of text modes. To summarize, use an SVN build to get aspect-corrected text. 😉

Gotcha, thanks for the response. I'll check out the SVN stuff.

Came here with almost the same problem - I am trying to make dosbox show 80x25 text in fullscreen with proper aspect ratio, saw this thread, build SVN trunk - no [positive] effect. That is, with aspect=true in SVN font definitely looks screwy - which is not the case with official builds, but when I switch to fullscreen, text is still stretched horizontally to full 16:10, so the question still stands: how can I display text in fullscreen on 16:10 monitor with correct 4:3 aspect ratio?

What machine= and output= setting are you using with SVN? There is an issue with the aspect correction of 350-line modes, which includes text modes, with machine=ega, but other machine types are not affected. Try the output=opengl with glshader=sharp settings for sharper aspect-corrected text.

Oh yes, now it's got the proper aspect ratio and the font looks nice - thanks a lot. One thing though: fullscreen aspect ratio is now correct, but in windowed mode it is stretched vertically. Don't actually need it, but just for the sake of having everything work right - is it possible to have correct aspect ratio both in windowed and fullscreen modes with the same config?

Hmm, windowed does have corrected aspect, unless some strange setting gets in the way. Maybe look at your windowresolution= setting, or try default settings.

windowresolution is set to 'original', machine to 'svga_s3', and with aspect=true it looks like this 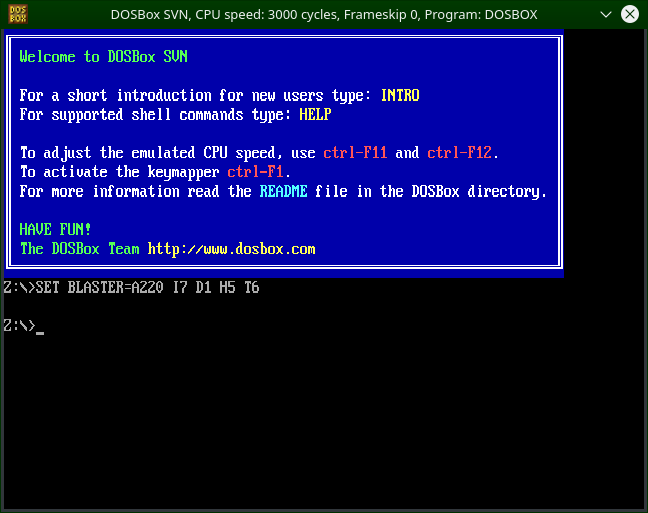 when aspect=false it look ok 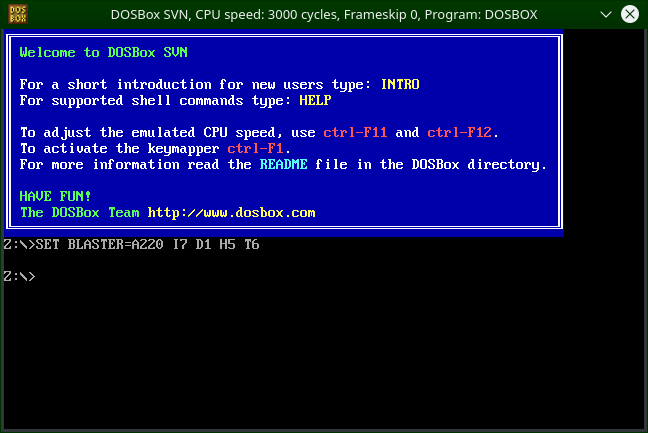 You are apparently concerned less with aspect ratio than with the appearance of the text, because the first screenshot has corrected 4:3 aspect and the second does not. At the risk of repeating myself:

It is important to note what I wrote about resolution and output method. You appear to be using output=surface, where the interpolated symbols tend to look ugly at lower resolution. So, your options are to use a different output method, such as the output=opengl and glshader=sharp that I suggested previously, and/or use a higher host resolution to give the interpolation more pixels to work with. I suggest windowresolution=1280x960 as a good choice for most DOS games, but do experiment to find what works best for you.

You are quite right, apparently I got so used to the way windowed mode looks that automatically assumed it to be correct. But it means that release builds always have incorrect and incorrectable aspect, doesn't it?