Introduction
I am testing an ATi Mach8 Graphics Ultra (VRAM) ISA VGA card. It's had its RAM upgraded to 1MB. Does that mean it has 512Kb (onboard) + 1Mb (VRAM) = 1.5Mb of RAM? I have tested all of the software below except the "update 2", and it all works. I didn't test "update 2", because I simply used "update 3" instead.

Notes
1) This is part of the version 3 package. It only deals with: Set Power Up Configuration, Set Current Video Mode, Test Graphics Adapter. There are no drivers in this download. Unfortunately, the software for this card is "all over the place" on the net, and not in one single easy to use updated package. Run this before installing any driver for it.

2) Run this next, before applying either the update 2 or update 3 package.

3) I didn't test this. I just installed the version 3 update, below.

4) Windows 3 driver update. I think it's the latest. You'll need to run the loader for it. That can be found directly below. Copy it to your temporary c:\ati folder, along with this version 3 update.

5) Run loader.exe at the dos prompt. It will allow you to install the Windows driver update.

Questions
1) Begin edit: solved. I found it here. end edit. Where can I find a jumper layout diagram for this card? For instance, there is a jumper in the middle of this card - between the 2 big chips. It isn't labelled. I wonder what it does? Also, there are 2 other jumpers (JU1 and JU3) on this card. I am guessing that JU3 (bottom right) sets the IRQ, but I don't know what JU1 (bottom left) does.

2) You see that other output connector on the right hand side of the card. Not the VGA, the other one. What's it for? Is that to connect the card to a television? 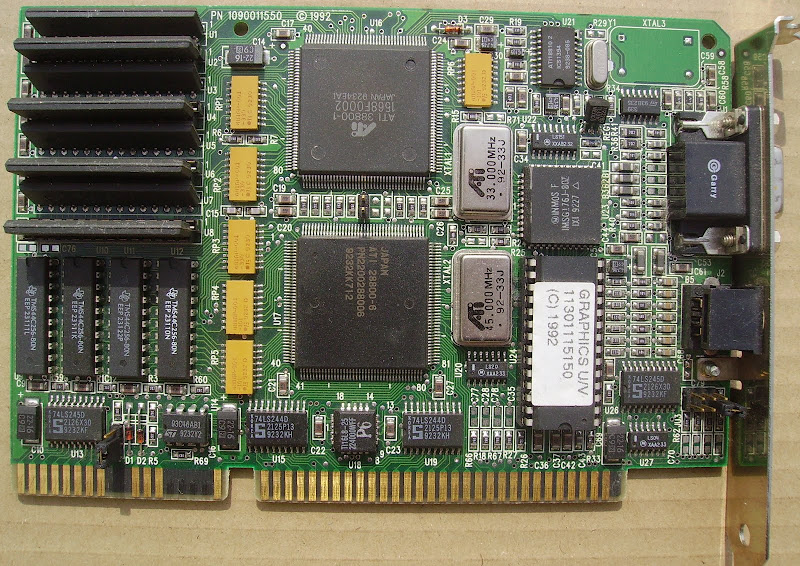 DOS set up
I set the card to work at 16-bits, as opposed to 8-bits. Was that the correct thing to do? I ran WinTune and VidSpeed (vspeed.exe), and the card seemed very slow. 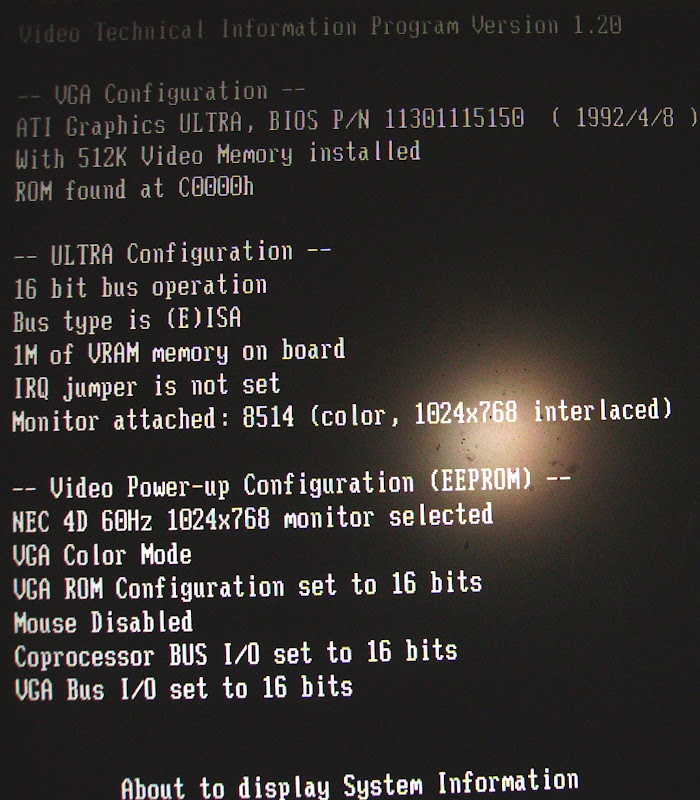 Using Windows 3
Here's part of the ATI desktop. I can't use 1280x1024. I think that's a limitation of the card/driver, rather than a lack of memory. 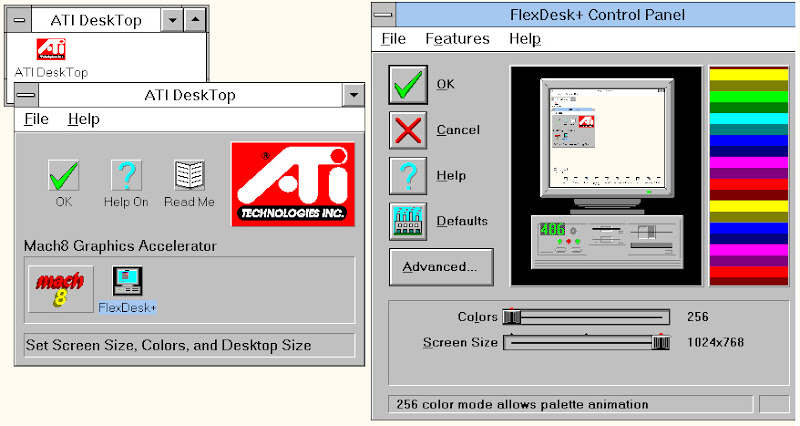 FlexDesk version 3, part of the "Windows 3 update version 3 driver" found in the links section at the top of this thread. 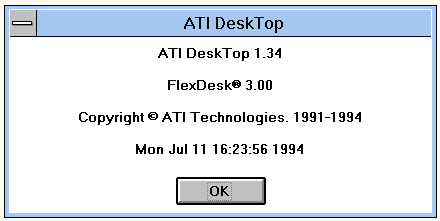 I'm pretty certain we've been over this before. 😒 The card has two completely separate video controllers on it, each with its own completely separate RAM, and it switches between them depending on what mode is being used. In DOS (or Windows standard VGA mode) the VGA core is used. It has 512K DRAM. In Windows, after you install the Mach8 drivers, it switches to using the accelerated Mach8 core. It has 1MB VRAM.

1) Where can I find a jumper layout diagram for this card? For instance, there is a jumper in the middle of this card - between the 2 big chips. It isn't labelled. I wonder what it does? Also, there are 2 other jumpers (JU1 and JU3) on this card. I am guessing that JU3 (bottom right) sets the IRQ, but I don't know what JU1 (bottom left) does.

2) You see that other output connector on the right hand side of the card. Not the VGA, the other one. What's it for? Is that to connect the card to a television?

I 'm not 100% sure, but I think the one between the two main chips is probably for selecting between 512K (closed) and 1MB (open) for the Mach8, the one at the bottom rear seems to be for switching 8/16 bit IO (16-bit by default), and JU3 is indeed for IRQ (disabled by default).

The mini-DIN connector is for a bus mouse.

Thanks a lot for the info! I'm sorry if this topic has arisen beforehand. I remember we were discussing a Mach8 co-processor card, a few months ago.

Ah, a bus mouse port. Might not give a good TV picture then. 😉

I am new here. I just picked up a mach 8 card for my 486 and I am trying to get color to display in dos. I can only seem to get the monochrome display. Any help would be greatly appreciated.

Reply 5 of 28, by Anonymous Coward

you need to use the Mach8 utility for DOS and set the card into colour mode.

It is possible to use the VRAM portion of the card in DOS, but only if the application specifically supports the Mach8 chip.

I'am not sure how compatible the card is to an Original IBM 8514A, but you might try hdiload.exe from the original disk: http://mail.lipsia.de/~enigma/neu/ps2/8514A.zip
This is a TSR giving an API for basic graphical operations.
Then you may try Mah Jong 8514 from this site: http://www.classicdosgames.com/publisher/ronbalewski.html

Reply 7 of 28, by Anonymous Coward

Should be 100% compatible. That was one of the main selling points.

Strange...I have an 8-bit card that sais Ati Mach8 on the chipset and has only what looks similar to a serial port?

Strange...I have an 8-bit card that sais Ati Mach8 on the chipset and has only what looks similar to a serial port?

Early video cards used a 9 pin connector instead of 15 pin.

Yup. Can't remember which one it was though

It couldn't be a mach8. It's probably in the wonder series of cards.

I think the VGA Wonder had one of those.. that 9-pin connector was for CGA/EGA monitors.

GUIs and reviews of other random stuff

Thanks after thinking it through just like anything late into the evening/early in the morning I discovered the problem. The 486 is a what is called a bridgeboard for an old commodore amiga. It allows the use of wintel software. It is essentially a 486 pc on an expansion card. the video display can be emulated through the amiga to allow for a 1 monitor solution between the Amiga and the PC. The Mach8 board did not like the video driver emulation. Once that was disabled, it worked well. As for the new problem.

I have installed the software that was available in this thread, and I have windows 3.11 with 800x600 display. the video driver says and setup for windows says 256 colour display. I installed calmira 4. The display looks like crap an attempt for 15 colours. I can't seem to get it to look like a 256 screen display. I don't know windows 3.11 very well. beyond running setup from the windows directory under dos is there a setting that makes sure that the screen is 256 colours. Is there a test program that will show a 256 colour display to test the display in windows is 256 not 16? I like the idea of Calmira, but if I can't get it to look like it is using 256 colours, I will be uninstalling it. Is there a flag in the system.ini file to force a 256 colour display?
Thanks in advance,

Sorry to revive this old thread. I just noticed nobody ever gave "source" an answer to his question about the colours using Calmira. I suspect the reason Calmira looks terrible is that it is limited to using the 16 system colours in 256 colour mode. In some ways this is a good thing, because otherwise every time you load an application your title and menu bars would constantly be palette swapping (ala Amiga)

slightly OT: Actually I tried Calmira on my system with the TIGA compatible card and as soon as I click the Start menu Calmira crashes with a Null Pointer Exception the graphics driver. (tigatc.drv)

Would this card (in the original post) be a good choice for say a high end 386 (AMD DX-40 perhaps?), or an entry level 486 (say a DX-33) system? Pre "multimedia", and pre Doom era? Did anyone own this card back in the day? Generally speaking, was it considered a quality card? Thanks for any thoughts.

Probably even overkill for a 386. Should fit a decent 486 system perfectly. Benchmarked an ATI 28800-6 card (VGA Wonder XL24) not long ago and it turned out to be a reliable card for an average 486 setup, performance-wise not far away from a Mach32. The 38800-1 chipset (Mach8) should be somewhere in between those two.

Forget demanding 3D scenarios but 2D and high color modes are what makes the card shine.

Probably even overkill for a 386.

What about an XT? This is the fastest card I could get to work in an 8-bit slot of a V20-based Turbo XT. The accelerator core just sits idle in this setup though, which is a waste 😐