My own humble little contribution 😀 32x32, 16-colors (Windows 16-color palette), white is transparent in the actual icon included in the ZIP file.

Also, a little joke animated GIF... I was simply dying to post this somewhere 🤣! 😀

Soooo... Am i late for the competition :pppp

Regardless of how late i am (which is 14 years :p) i made these just for fun, so if you wanna try something different instead of default these might be an option.
Though as you can easily see i am no expert at logo making nor pixel art and i actually share this more for an actual professional to see and make better version than mine, so it could be useable.

I entirely make it in paint and its not an .ico file however if you want to use one of it i could fix it and make it into an .ico (though i don't really remember how we did that :p)

Here are the boys:

And this is the workspace :p 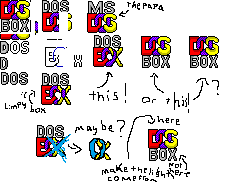 Also at the bottom parts of the workspace you can see there is a section with a light blue color, that idea was cool however i am not talented enough to do that but it would be lovely.
Have fun! 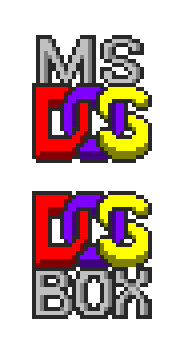 Can you also do more "authentic" version of this one :p? I really like this one however i am no pro at pixel art.. in fact i am no pro at any form of digital art :p So id be extremely glad if someone else who knows what they are doing touches it.

Well i struggled with B too but cant X do this around O? But yeah, why not i would love to see the non looping version as well. 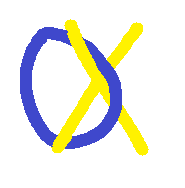 Thank you very much, i'll be waiting.

edit: just came to my mind but, how about stretching O a little bit?

Surely, if you want to do an edit of the old MS-DOS logo, it should be something like this...

Inspired by the current logo, it's got the crossing of B and X above and below the O of DOS, but I slightly offset them.
I think it needs work -- the weird sizing and offset do look kinda ugly, and arguably it's a bit busy -- but... Thought you might enjoy the concept. 😀

Here it is without the offset:

I also see the dogbox tbh :p especially on the little versions. I think the reason of that is the O got a bit too squished so S gots a little weird and gets readen as G.
You may also try what eobet did back in 2005 with the ms dos logo pixelated aesthetic instead of making the B and X gray and small.

(ofc this would make a terrible logo as how it is right now but if you could find a way around this it might be cool)
(also you may want to squish X and B to O somehow or seperate D O S somehow to make the logo square again :p)

I beg your pardon?

I think the point is that my mockup was a bad idea, and eobet's is also somewhat questionable.

To be honest, I'm not overly pleased with my result... Clumsy sounds like a good descriptor.

Eobet's is, I would say, a lot closer to the kind of thing this idea would have to resemble, but I'm not sure this really is a direction worth going. I don't think you could get it down small enough while still looking both good, and recognisably similar to the old MS-DOS logo.
Could try keeping the colour scheme of the DOS letters if you want to go for a variation on the cross design as used in the current icon that tries to have a general look/feel more similar to the old MS-DOS logo, but keeping them intertwined and at full size isn't going to work.

Though I must say, I am growing on this one. If a more MS-DOS logo-esque one was wanted, this is probably the way to do it.

Having said that, I'm not a big fan of the dithering in the purple, if I'm totally honest; the one red_avatar put up at a larger size is undithered, and looks nicer for it, if you ask me. 😀
The one you use as your avatar is nice, since it's stacked like the old MS-DOS logo, but I don't think BOX intertwines as well as DOS does, so this is probably the best way for that approach.

I used the floppy disk icon from pages ago to create a shortcut to launch. Pretty neat.

It's a plain shell looking icon in which you can type...

and add a miniaturized screenshot or box image to it...

the icons are pretty large 256x256 ment for high resolutions we have today and the possibility to have nice large icons (i like).

and this to run game specific tools or lauch setup programs

i will attach with my next post a zip containing the work i've already done covering some dos games i play (or haven't played yet)
plus the templates i use in GIMP as .XCF, they include auxiliary lines to hep you positioning and deforming the images on the template.

To me, this is the closest, but the letterforms aren't quite right. It's clearly bold MS Sans Serif in the original. Here's what I came up with:

And here's a version with the letters squeezed up more so they fit under DOS:

That looks good but the O looks off-center. Try to reduce the B one pixel in width and push the O one pixel to t he left so the X has more room to breathe.

Well, it's been over 10 years since my last login, and holy smokes, almost 15 years since I last posted in this thread (and look, the amount of hair in my old avatar came true)!

I needed to convert my files (again) to a new software suite I'm using, so since I "lost" to ChaosFish and his layout, I thought I'd flip my layout and tweak it to be a bit more obvious to where my inspiration was from:

So, reflecting upon this after all this time, I realize that making a SNES inspired icon for Dosbox might not have been a perfect fit, but to me, Dosbox (and GOG) finally made DOS gaming as easy as console gaming, and I still like that reasoning I must admit. 😀

Let's see if this works, and if it takes another 10 years or so for me to post again...