I'm having a little issue with my bourgeoisie Windows XP Pro. 32-bit machine (i7-3770k OCed to 4.5GHz, 16GB DDR3-2400, 980 ti; also runs Vista and soon 7; I'll probs eventually make a post dedicated to it and link it here). I have noticed that in the Nvidia control panel, my Dell S2417DG monitor (using the Displayport input) shows up as a CRT, and prevents me from using some advanced features of the control panel, as well as I suspect proper resolution support in some older games (both NFS Underground games for example). 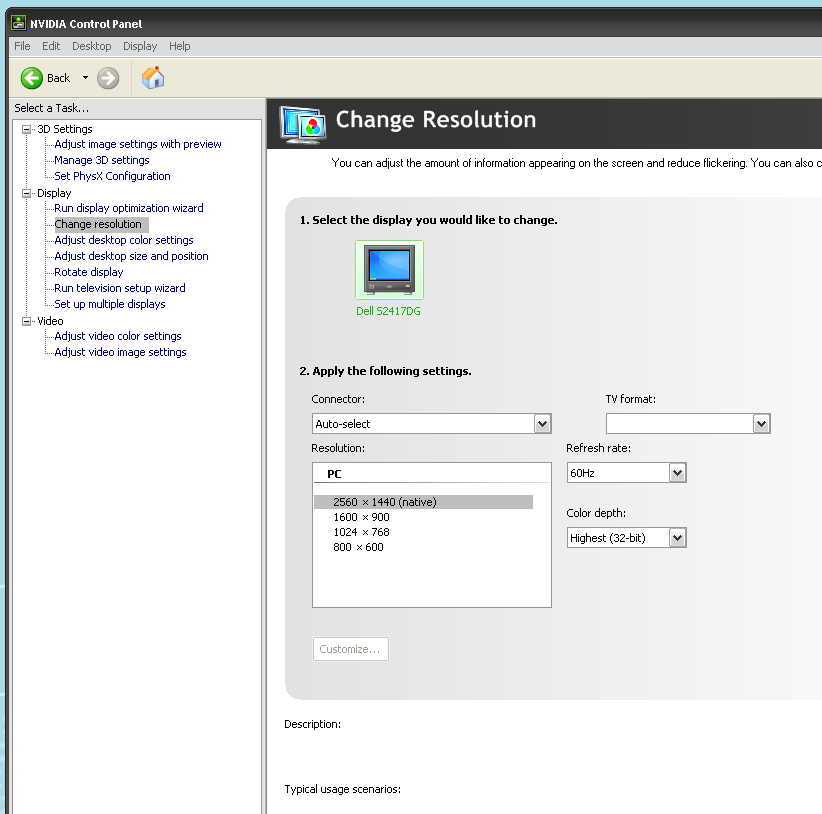 Now, I am aware of the limitations of Nvidia driver support under XP (Displayport 1.1 and HDMI 1.4 (?) IIRC), but I don't believe that excuses this... obviously false identification of my monitor under XP. However, there seems no obvious way to remedy the situation, and so I'm asking you guys if any of you know of a way to manually change my monitor type (e.g. registry and/or config file edits).

Any help would be appreciated. Thanks!

The latest XP drivers of NVIDIA are broken in this sense. This problem is not port specific, monitors using DVI looks the same. Actually they are not detected as CRT, in case of proper CRT detection with working drivers you do not have connector menu (composite or s-video) or TV-format selection (NTSC/PAL). The biggest problem with these buggy drivers is that custom resolution settings is grayed out. But you can add custom resolutions by editing the registry:
WinXP Customizing Resolutions (nVidia)
WinXP Customizing Resolutions (nVidia)

Although there is no known solution for the black crash/limited color range problem for HDMI/Displayports under XP with these NVIDIA drivers.
Because of this problem using DVI/VGA ports are recommended with NVIDIA XP drivers:
https://www.nvidia.com/en-us/geforce/forums/d … sue-in-hdmi-dp/
https://www.pcgamer.com/nvidia-cards-dont-ful … dmiheres-a-fix/

Hmm... I mean, the Nvidia Control Panel (NCP) allows me to set the max resolution of this monitor, as well as it's refresh rate (144hz). However, when I go above 85Hz, the screen starts to hard glitch. That's why I was hoping that if I could somehow tell Windows/NCP to think of my monitor as an LCD monitor instead of a CRT or TV, then the higher refresh-rate would work, as well as game's ability to understand what they are working with.

Given the driver's buggy nature, I'm guessing even a custom resolution wouldn't work, no?

1. Under XP games cannot get the type/port of an attached display, only the dimensions, refresh rate etc. In the XP era this information was not so relevant so the Win32 API had not offered a way for normal programs to get this info.
https://docs.microsoft.com/en-us/windows/win3 … getmonitorinfoa
So you do not have to worry about user programs falsely identify your attached screen. They do not have to anyway. This is the concern of the display driver, not user programs or Windows itself. The problem is the driver is buggy.
The driver has access to the monitor's EDID info (from the display device itself) where detailed resolution parameters are stored. The driver does not need any help from Windows to use proper timings. So even if there would be a switch in Windows itself to set the display type that would not help these buggy drivers.

2. Custom resolutions added through registry work if your display supports them. Since with these buggy XP drivers you cannot set the scaling mode either (No GPU option is available, only the default Display scaling mode is active) you should only add custom resolutions that your display can really handle. In your case such useful mode would be 1920x1440 for older XP games that can only use 4:3 resolutions (and if your monitor has an 4:3 aspect ratio selector in its menu this would be a pixel perfect resolution for older 4:3 only games with black bars on the sides). 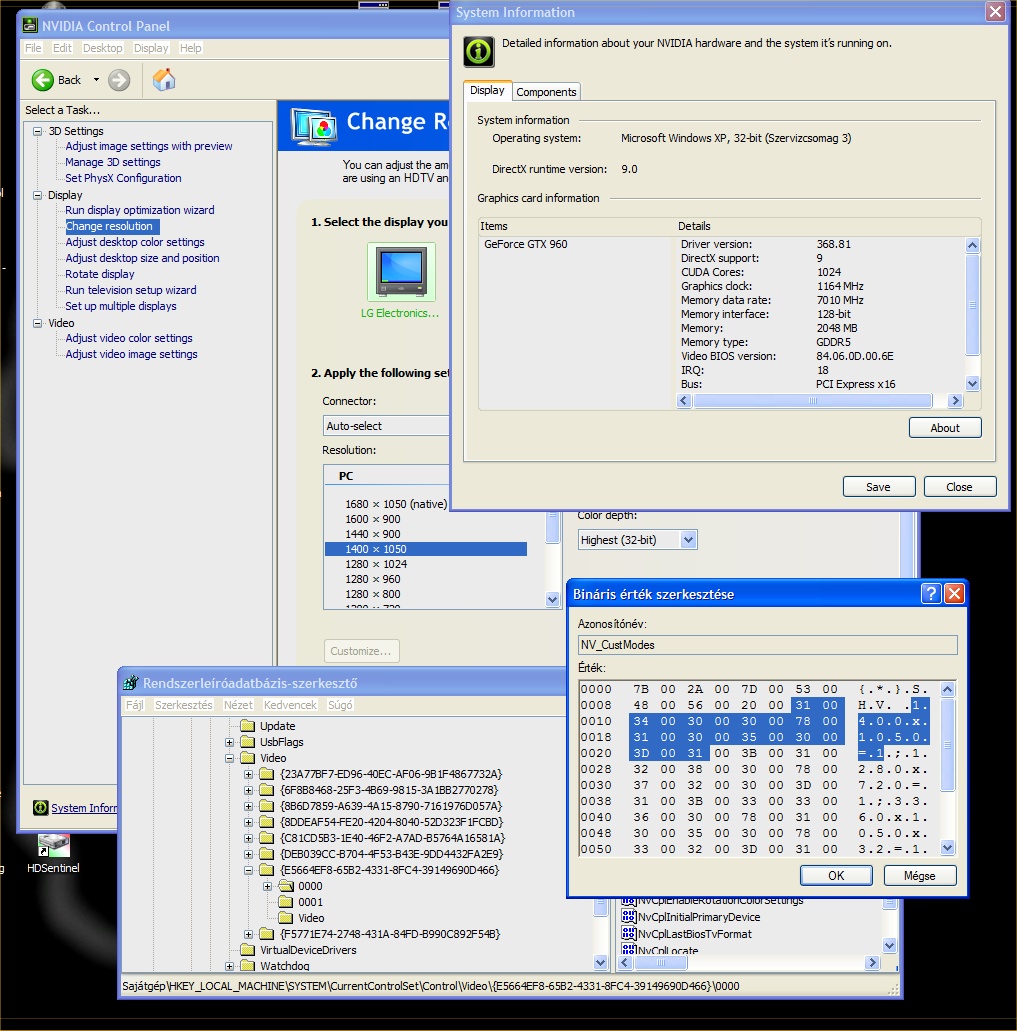 My apologies. I believe I have overlooked that post you made.

In other news, I got hold of my final hope in this matter, a Startech DVI to Displayport adapter, in hopes maybe getting a means to make the NCP see my monitor as not a "CRT" and "unlock" the other features in the NCP. Alas, 'twas not to be. Using another HDMI monitor as my main display, while the monitor was detected as an HDTV, my main Dell monitor in question would not play ball with the adapter under XP, or perhaps the other way around. (in BIOS and during the XP boot-up screen, picture would be displayed with the adapter, but upon hitting the XP GUI, nothing was shown from the adapter).

With all other alternatives exhausted, and seemingly no way to trick or manually tell the NCP that my monitor is, for example, a "digital DVI monitor", if I want my cake and eat it to (high resolution and proper monitor detection, and perhaps on the off-chance certain games offering better resolutions than 1024x768 (stupid NFS Underground 1 & 2)), I'm seemingly going to have to buy a separate monitor just for XP for this machine.

Since the cheaper modern options for monitors with DVI ports are 1080p monitors, I'm looking at this V7 monitor used as the best candidate for this job. Can you Falco or someone else verify whether 1080p over DVI works, with the monitor being properly detected as a PC monitor in the NCP, with all relevant features accessible in the NCP? Want to make sure before purchasing it that it'll work as expected. 😁

I know this seems overkill for such a stupid problem, but the point of this PC is to be and overkill XP machine, and if anything isn't working up to my standards, then I'm willing to do what I "need" to do to get it where I want it to be. This is one of those things.

Neither buying any DVI monitor would solve any problems for you... As I have already told you this is an Nvidia driver problem that is NOT port specific. On the screenshot where I showed the custom resolution registry settings I used an 1680x1050 DVI monitor and as can be seen on the underlying Nvidia control panel it's also falsely identified as HDTV... So you should finally realize that this NVidia driver problem is not monitor/port specific at all. It affects even traditional CRT monitors. If you want to use properly working XP setup you have to use older (less buggy) Nvidia drivers but older drivers only work with older GPU. So instead of changing your monitor you should change your graphics card instead.

Didn't notice that you were using a DVI monitor either. please forgive me

That's... really disappointing. I mean, I could use my 780 ti with older drivers, but then the build wouldn't be as epic as it is now. This is something I'm going to have to figure out myself.

As for those widescreen fixes, I remember trying those and having them not work. I thought they needed a cracked version of the game. I'll try again shortly, though.

@Falcosoft a bit of a late update, but an update non-the-less.

As for the driver issue, you were right. Recently, I took my i7-3770K rig in question, hooked it up to my only mid-2000s DVI monitor (Dell 1907FPt), and started with a much older driver and a GTX 295, and worked my way up to close to the drivers available currently on the Nvidia driver page with a 780 ti until problems struck. It turns out that the drivers before 353.XX (352.86 being the last driver available that I could easily find) were the last drivers that properly detected monitors and provided the associated scaling options in the NCP. Driver 352.86 officially supports the 900 series except the 980 ti, as it was released prior to the launch of the 980 ti, so I'm going to use my 780 ti after all for the time being (guess the 980 ti is a bit too powerful 😜 ). Of course, I'll try to add support in the .inf driver file later and validate it working with the driver, but for now, it's okay. While I couldn't find an official Nvidia download page for this driver, I did however find good third-party download links on Guru 3D ( https://www.guru3d.com/files-details/geforce- … r-download.html ). 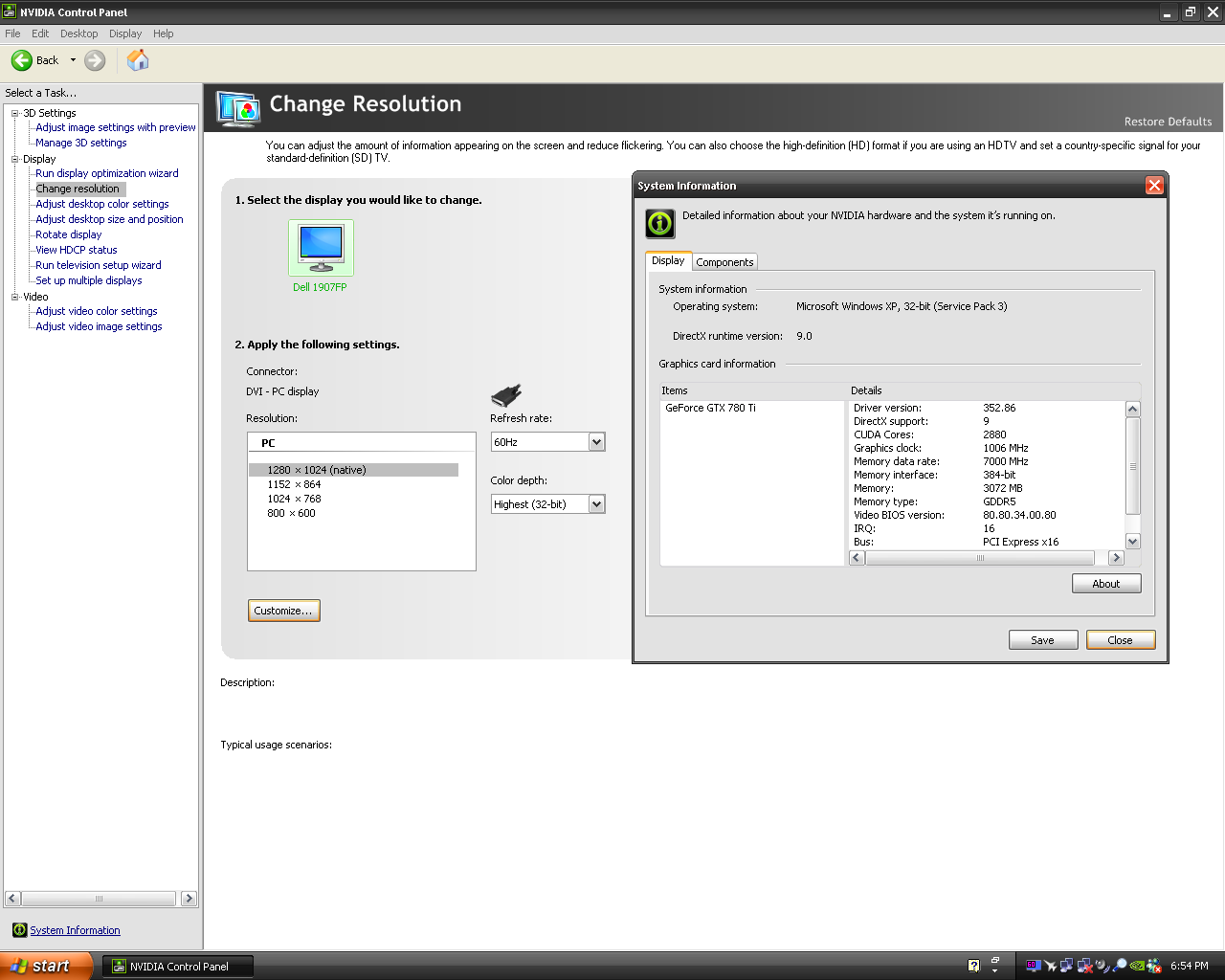 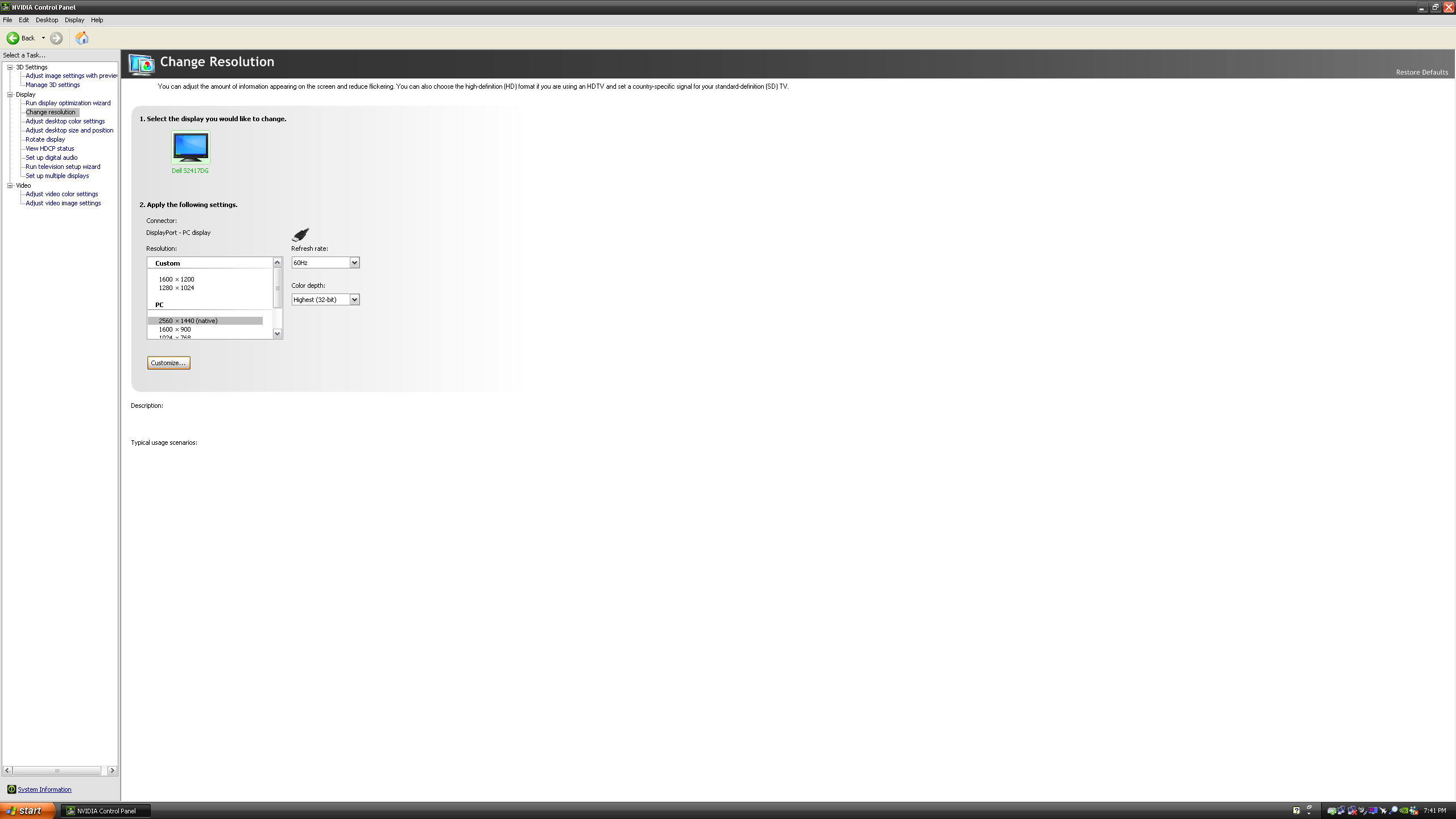 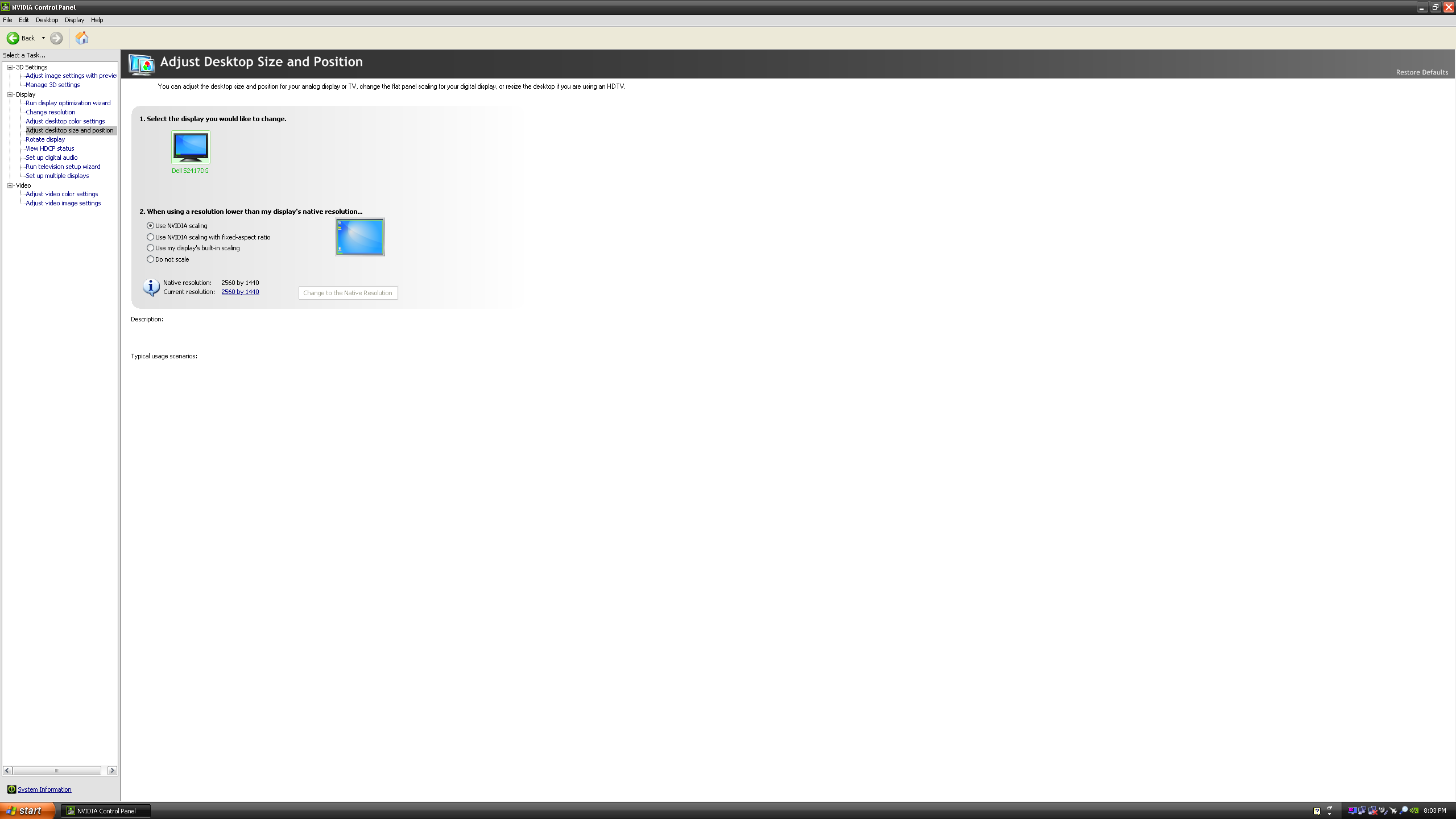 With this driver, I was able to successfully increase the resolution in NFS: Underground 2 with a little work up to 1600x1200, and man did it run nicely on my 780 ti. However, I was not able to increase the refresh rate on my monitor above 85hz, which would be a matter left for a later date.

Hopefully this information proves useful to those who wish to get proper monitor detection on the latest Nvidia cards supported under XP. 😁