I'd be interested in purchasing several (4-5 units), but with a 3 digit display... I have several pentium 233 and k6-II/III PCs in AT cases with missing MHz displays....

and what we really need are those (attachments) as they are very rare and everything else is relatively easily sourced from cases that are going to trash.

Good job on the display anyway.

@wiretap I will be building five of these for my cases, I just wanted to confirm that the following code, schematic and boms are final:

Could you confirm? Or post if there are newer?

I also had a few questions I hoped you could answer..

And finally, a bonus question:

-Does the code only interprete numerals for the display or can it also interprete alphabetical characters? ie. can I program it to display HI and LO?

- The 150R resistors would be fine.
- 3.8KR resistors are fine.
- You don't need a low noise transistor.
- A cap of 25V would work fine. Anything 5V or higher.
- The code is 99% there. It made need a little tweaking.
- I didn't include any code for HI/LO, but it could be modified for that if you choose to go that route.

I don't have any further updates on the project since I've been far too busy with work, family, and home schooling 2 of my wife's nephews.

A little better 2-digit design.. easier to implement and program. Less complicated as well. Based on an ATTiny85, so Arduino guys should be able to build and program this easily with minimal cost.

Pics, BOM, KiCAD project attached. I autorouted it because there's a lot of small traces that need tons of vias, so feel free to try to do a better job 🤣. Also, I think I left enough room in all 4 corners to move the cutouts for mounting if you need to. In KiCAD, you can just select the edge cut layer and move the holes as you need them. 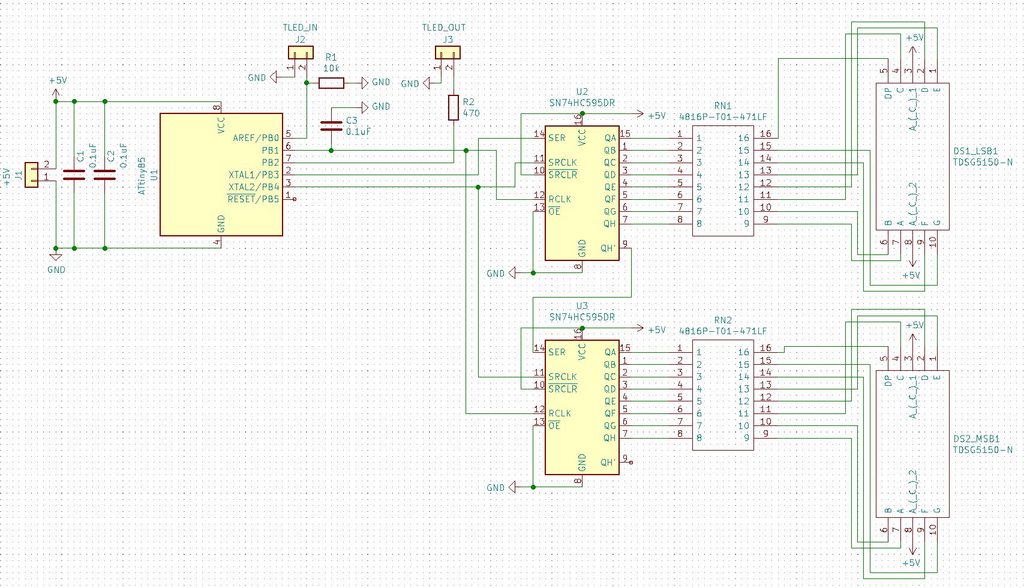 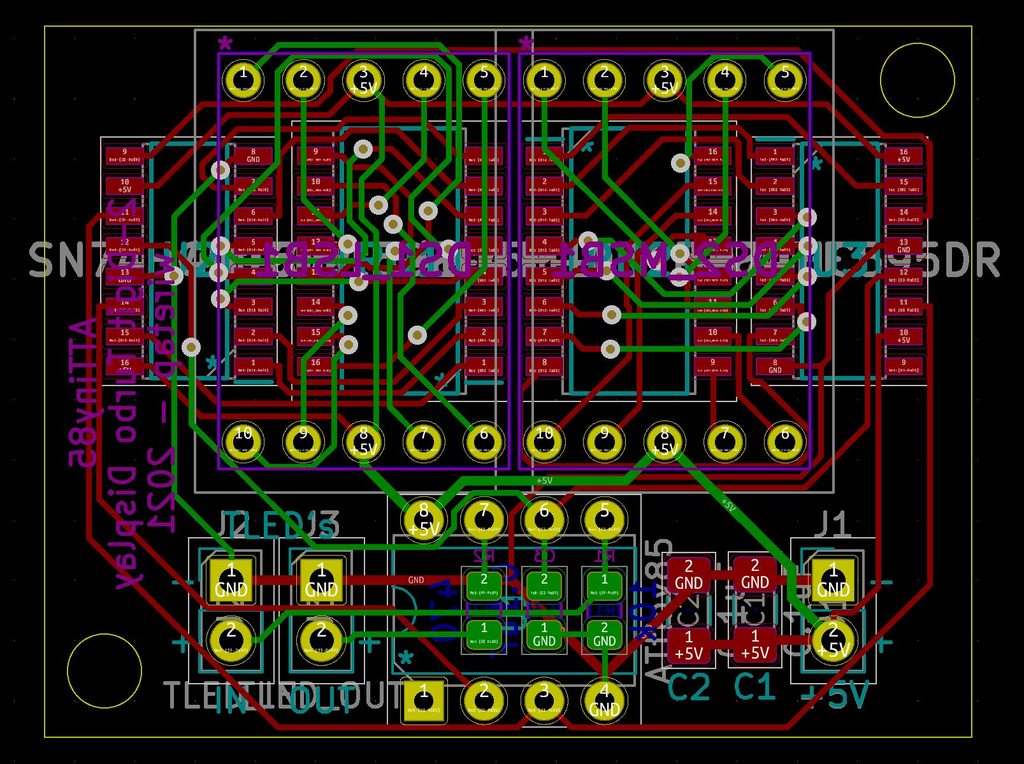 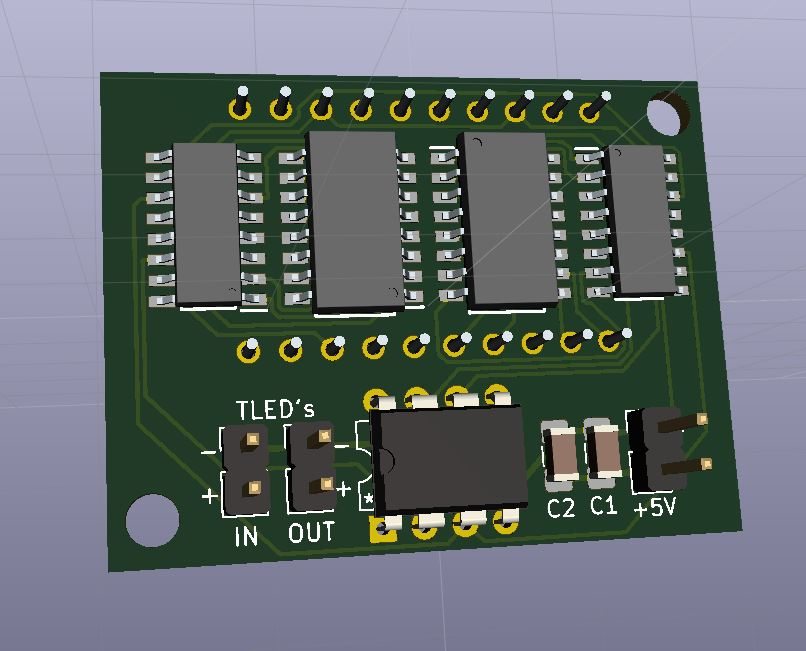 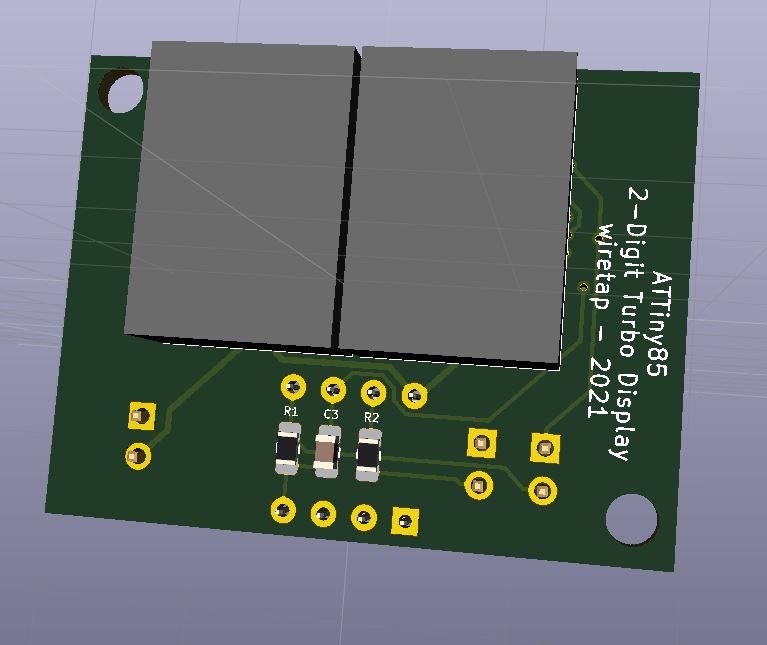 Hmm, are two 74HC chips necessary here? Couldn't it be simplified further by connecting the displays in parallel (except common pin for power) and switching the power rapidly between digits (200Hz or faster)? That's display multiplexing 😀 /edit: seems that you even used multiplexing in earlier simulation/

That could have been done, but you'd need more than an ATTiny85 to do it for enough I/O pins. And yes, two 595's are necessary here.

Sure, there are not enough pins so sorry. I even used two 74HC with ATTiny by myself earlier 😁 except I connected 3 digits in parallel to one 74HC, and used another 74HC + transistors for multiplexing.

BTW speaking of these displays with "MHz" letters:

This can be made, I did something similar (custom display) for flight simulator indicator lights. Level of complexity can vary - it depends if you want to just have all MHz letters light up at once, or do you need to have ability to light up particular segments? (is there any reason for this?)

A mask for the letters needs to be created. It can be a thin PCB with holes passing the light etched in copper. To get rid of copper color, it can be covered with theatrical ND gel adhered to it, or covered with black silkscreen.
Another way for making mask is to use laser-engraved piece of black-on-white ABS board.
OR (home-made version) it could be laser-printer with deep black (mixture of all colors + black on color printer) on tracing paper, then covered with clear tape.

Below that mask will be second PCB with small SMD LEDs of chosen color (or RGB... 😁 😁).
If we want to be able to light up particlar segments: the LEDs need to be precisely positioned in order to match the light mask. Then the LEDs will need to be separated from each other to prevent the light spill - a 3D printed "skeleton" with thin walls can be used for that.
If we just want to light up all MHz letters at once - one LED for each letter could probably suffice, a diffusing material (e.g. diffusion theatrical gel, or tracing paper) could be added to spread the light evenly.
In both cases, obviously a connector needs to be added.

Outer rectangular shell can be 3D printed. LED piece will be on the bottom, mask on the top and there can be hot glue or clear epoxy injected between them.

I would prefer to just make the "MHz" part and join it with already available digit displays. To make the seam invisible, you can just cover both pieces with ND gel, the display will appear to be almost black after that, but as soon as you turn it on, the letters and digits will appear (resistors need to be chosen properly so there will be enough power to make up for the light loss). OR an additional mask to cover the entire piece could be made.

OR it could be possible just to find alphanumeric LED displays, and use these. An additional mask could be printed to cover unwanted segments, or to make the seam invisible.

Here's some code for the February 23, 2021 post. I didn't test it because I haven't received any boards or parts yet... but feel free to critique/correct things or use it as a base to get started.

hi , where did you buy those leds with the red MHZ ? i have been looking for one of those for a long long time

Those have been out of production for the better part of 2 decades as far as I know. An alternative would be to use an alphanumeric style segmented display.