A little more compatibility for forced resolution on DirectX 6 and earlier, but nothing major for now

New entry: Max Payne with a fix for missing audio with simple DirectSound Hooks. Full 3D sound\EAX emulation
will come in the future

Arcturus: The Curse and Loss of Divinity (DX6-): works with resolution forcing, but dialogue boxes have ugly seams that makes it undesirable. Same as other methods for forcing resolution though.

Farscape: The Game (DX8): UI is stuck in top left portion of the screen when resolution is forced.

Shikigami no Shiro III (DX8): Seems to be forced into a small window. I don't recommend trying this on Windows 10 (it relies on enabling secdrv.sys).

Unreal Tournament 2004 (DX8): Only see top left of the menu screen when resolution is forced (not DPI related).

Except for Gorky17, none of these are important, I'm just testing because I'm curious how well DX8 resolution forcing posting and reporting my observations so no one else wastes their time trying games that won't work (yet).

Dark Reign 2 still has issues with cut-scenes, but I found this interesting, if you select the second GPU choice:

I get "Failed to initialize the Graphic Hardware Device" when i try to run Resident Evil 1.

The new version, keeps giving me the same issue.

I am trying to run Outwars from help.exe, but the injector just exits after patching.

With the last version, Dino Crisis doesn't work with "FORCED RESOLUTION" option (it works with this option disabled). It throws me a message "Error Direct3D.(80070057)". It worked before with older versions. I tested in two different computers with the same output.

Hey man, thanks a lot for your tools, very useful!
I do have a question, I'm trying to rip the textures in Tomb Raider 4, but it seems like the 2nd part (right hand side) of the title does not come up when I cycle through the textures. Am I missing something? Is it always 16 textures?
Also, it seems like in the latest version the Compiler is no longer available and the menu option for it says "nothing to see here". I'm currently using the old style Compiler.exe
Help would be very appreciated.

I am trying to run Outwars from help.exe, but the injector just exits after patching.

Any other info. Does it updates the error.log file ? Video driver is up to date ?

On the computer that produced this log, i'm suprised it ever worked because the program can't handle resolutions narrower then 4:3. You could try change the desktop resolution to 1280x960 before you start. The last version might also have broken
DirectX 6 and earlier games on anything but win 10. You can try version 5 or earlier, the link is on the 1st page

All the textures are there. Note that each of those textures has tiles that are used to texture many objects. Most of the time the textures (witch are all 256x256) are divided in 16 64x64 tiles, so you have at least 256 textures

Thanks for taking the time to reply.

All the textures are there. Note that each of those textures has tiles that are used to texture many objects. Most of the time the textures (witch are all 256x256) are divided in 16 64x64 tiles, so you have at least 256 textures

I think it's easiest to explain if I show you every single page of screenshots, because I've extracted all of them and the right hand side of the title is not there.
Here's an imgur of all the extractable screenshots and you can see at 14/16 that the left hand-side texture is available but not the other side: https://imgur.com/a/NYVPNXQ
This is the image that shows the left hand side that I can extract: 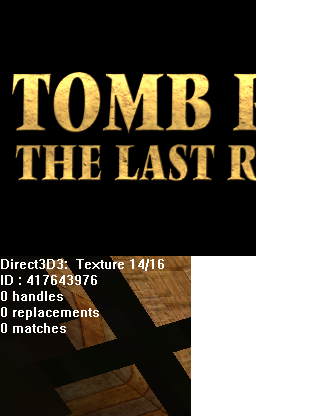 If I try to run the new Compiler I get following error:

How do we use this patch exactly? I know it is a command line patch, but when I try to use the command -target it tells me that it can't find a target. I have specifically entered the path to the tomb3.exe but it still will not work. I used this command in cmd: -target "c:\Steam\steamapps\common\TombRaider (III)\tomb3.exe"

It then gives me this error: 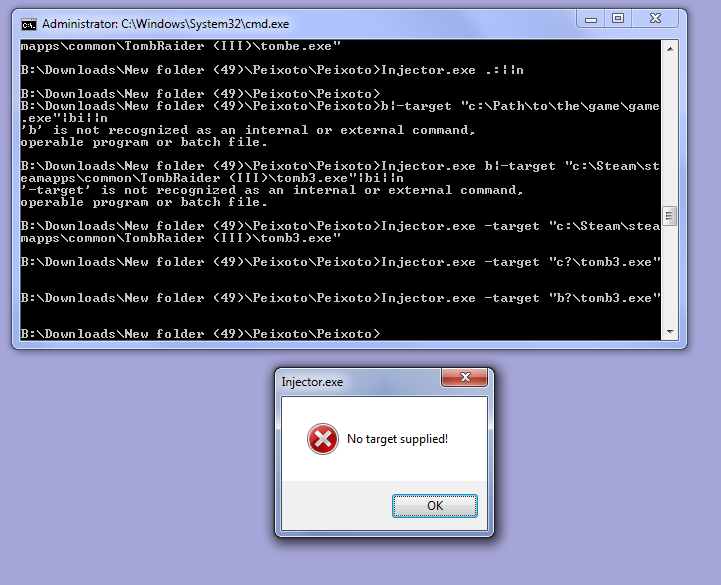 I even tried this command: -target "c?\tomb3.exe"

It still gives me the same error. Because in the Main.txt in the help folder you said that c? would point it to the directory of the Injector.exe. So I put tomb3.exe in the same directory and it still didn't find it. I made sure that Injector.exe was running as administrator. Is there any way that we could have a Injector tool with a GUI? Because for some reason the command line is not working for this program. How did you guys get it to patch anything?

I am running a Windows 7 Professional 64-Bit operating system if that helps.

"A famous explorer once said, that the extraordinary is in what we do, not who we are. I’d finally set out to make my mark; to find adventure. But instead adventure found me. Everything lost is meant to be found."
--Lara Croft

Thanks for taking the time to reply.

Ok, i reproduced the missing texture bug. I'll try to fix it on the next update.

You're trying to start the compiler script directly. Don't do that. Find the texture compiler entry on the Help.exe program, select it and click start

How do we use this patch exactly? ...

The way to use the program is to run help.exe

If you want to use the command line, the syntax is:

but 1st you have to edit the target key on the Tomb Raider 3.ini file. It's more practical just to use the help program

Ok, i reproduced the missing texture bug. I'll try to fix it on the next update.

Cool, thanks a lot! I thought I had overlooked something obvious.

You're trying to start the compiler script directly. Don't do that. Find the texture compiler entry on the Help.exe program, select it and click start

Oooohh, ok, yes that worked. I got confused because clicking the option said "nothing to see here, move along". If I could make one suggestion, I'd say that it would make sense to maybe mention this in the description for the texture dumper (it wasn't obvious to me). Either way, thanks a lot!

Oh I see what happened, my stupid antivirus deleted the help.exe because it thought it was a virus. It removed help.exe entirely from the zip file as well. Oh well, I will have to redownload it and add an exception to my antivirus so that doesn't happen again. I am glad that there is a GUI to help me patch things. Thanks for the fast and very helpful reply! 😎

"A famous explorer once said, that the extraordinary is in what we do, not who we are. I’d finally set out to make my mark; to find adventure. But instead adventure found me. Everything lost is meant to be found."
--Lara Croft

The new update brings a lot of new things! thanks for that!
I'm having an issue to configure the gamepad input for Tomb Raider games... On keyboard and mouse emulation option there's no . to setup the crouch/duck button, and there's no NumPad 0 to setup the look button.
If you have the time to implement that would be awesome!

Also, how can we get the proper aspect ratio while mantaining the hud menu and the game itself with correct proportions using 16:9 or 21:9? (as we could do in the earlier versions)

The next question after finding a fix to this is how to put a fixed resolution (1280x960) to make the game looks with a proper resolution. Anyway, i made this with 12noon's Display Changer calling the injector, and now works with your lastest patch.

Glad to hear it.

Hi, why does Windows Defender say there's a virus?

Is the file safe?

Hello. The new patch has resolved my previous issue with Tomb Raiders 2 and 3. But now new problems have taken place. In Tomb Raider 2, I'm using the Upscaled FMV's and for some reason, all I get is a black screen. The audio from the FMV's still play, but I can't see anything. Using Non-Exclusive Fullscreen doesn't resolve this issue either. Everything else works as expected. As for Tomb Raider 3, there's this line on the Main Menu Screen as well as the loading screens that won't go away, no matter what settings I use. I've attached an image to showcase this issue. Also, I'm using the DXT5 Compressed Textures and it's behaving really odd. For example, I'll start a new game and the textures will load just fine, but if I go back out to the main menu and either start a new game, or load Lara's Home, it'll switch back to the vanilla textures and they won't revert back to the new ones until I restart the game. I've tried different settings on the patch and nothings worked so far. And sometimes black box will pop up either on the loading screens or in the levels itself when the new textures are working. It doesn't happen often probably because the new textures get replaced by the old ones before they can start popping up. I thought I'd let you know about these issues and see what you could come up with that I couldn't. Thanks again for you hard work on this patch!