As some of you may know, I've been particularly unlucky with my 5x86/VLB build. It's been a PITA to get it working and once I've got it semi-working, any additional change to the hardware resulted in yet another problem. I wanted that build to get a high-end "pure DOS" machine. Something a bit more "authentic" for early 90s games than my main Pentium Pro/Voodoo build. Also I wanted to play around with sound using the newly acquired Dreamblaster X2, Yamaha SW60XG and a MIDI2USB cable (for using Munt). However, for the last month I've been mostly playing with motherboard jumpers and IRQ, not sound.

And then it occured to me. What could be even more "high-end" in pre-Win95 era than any 486? Why, Pentium, of course! And I have just the thing: This is Intel's Batman's Revenge. Socket 4 motherboard for the original Pentium. In my case — a Pentium 60. It comes with 430LX chipset, 256KB L2 cache, 3 PCI slots, 5 ISA slots and 4 EDO RAM slots (up to 128MB cacheable). Unfortunately, the passive heatsink is not removable, so I can't show the CPU. I got this motherboard as a gift more than a half year ago but never actually bothered to test it, since I had a bunch of Socket 7 motherboards with PMMX. To my surprise, not only does it work, but the ODIN battery is actually perfectly intact. It has AMIBIOS, but not the fun, "Windows-like" kind.

The layout of the motherboard is unlike anything I've seen on a Pentium motherboard. I like the location of the AT power connector and the arrangement of the RAM slots, though overall the Batman's Revenge is a bit of a tight fit for my case.

This motherboard does have its quirks. It doesn't have PS/2 pins but it also has a non-standard pinout for the COM ports (and I'd like to use a mouse). To make my life easier I decided to simply use a multi I/O: It's an Iwill SIDE-2610 aka "LIGHTNING SPEED ISA I/O CONTROLLER". Can't beat that, can you?

Next up, a videocard. A Matrox Millenium: Probably not the best card for this build, but I wanted to test it anyway. Might switch it for the S3 Trio/Virge or Cirrus Logic 5430 or 5446 later on. Creative SoundBlaster 16 CT2700. It has DSP 4.11, so probably not the best companion for the DreamBlaster X2. However, none of my OPL3-enabled SoundBlasters are bug-free, so I wanted to start with this one and then probably switch to a Vibra or a Yamaha Audician. I don't really need a CD drive in this build, so I'm using this 4x Creative just for looks (it has a peculiar loading mechanism): 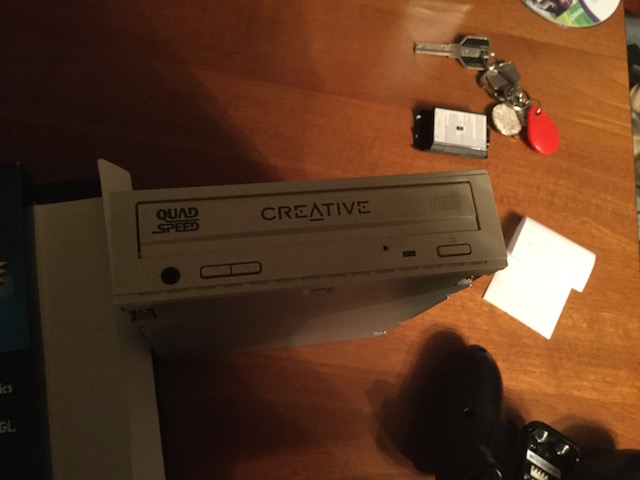 Here is the end result, in my favourite case. Didn't configure the LED yet, as I'm yet to figure out the turbo speed of Pentium 60. Most of my VLB stuff was made around 1994, so it came out almost at the same time as this Intel motherboard. And I must say that after all this experience I began to appreciate Pentium and PCI a lot more. Compared to a Socket 3, everything... just works. (I still want to revisit that build once I get a better motherboard)

That is a really nice machine, the Matrox is probably more in keeping for a high end build of the era than S3 or Cirrus I should think, and you benfit from that lovely picture quality too. The member here HighTreason did some very interesting youtube video's on P60/P66, you might well find those of interest.

That is a really nice machine, the Matrox is probably more in keeping for a high end build of the era than S3 or Cirrus I should think

I've never really used PCI cards for pure DOS, but I've read that Matrox has issues with some games.

The member here HighTreason did some very interesting youtube video's on P60/P66, you might well find those of interest.

Yes, I remember him actually hating the platform due to IDE implementation and other issues 😀

The Batman had some serious issues so it would be interesting to see how this board has overcome them.

It has AMIBIOS, but not the fun, "Windows-like" kind.

Dude, ain't nothing fun about WinBIOS. There's a reason it disappeared pretty quick. EFI BIOSes were the next time you could use a mouse pre-boot (I'm sure some kind soul will correct me if I'm wrong).

The Batman had some serious issues so it would be interesting to see how this board has overcome them.

Looks like HighTreason actually reviewed Batman, not Batman's Revenge. I can't yet comment on performance or stability issues, but I can say that I don't have any limitations on RAM and HDD. I.e., I can actually use EDO and the board worked with the very first set of modules that I tried, so it's probably not too picky about the modules. Also, I'm using 1.6GB while HighTreason mentions that his board doesn't support anything larger than ~500MB. I did not need to specify the drive geometry either — it just worked.

Had an awesome experience with this machine so far:

1) Duke Nukem 3D is entirely playable at 320x240 but hicks up sometimes at 640x480. Overall the perfomance seems a bit better than what I've seen on YouTube. Maybe that's because I have 64 MB of RAM and a pretty fast 4MB Matrox card? Dark Forces is also really smooth.

2) Today I learned that a 16bit version of Total Commander exists. I've installed the drivers for my 3COM card, the TCP32B.exe (Microsoft's TCP stack for Win3.11) and TC. Configuring TCP/IP is fairly straightforward once you get a working set of drivers, here is a nice guide.

The downside is that Windows now takes pretty long to start. The FTP transfer speed is about 250-300KB/S.

4) CT2700 is really noisy. On the bright side, I can switch between SW60XG and DreamBlaster X2 easily. Played both Duke Nukem 3D and Doom and haven't experienced the hanging note bug so far.

This board seems to have turbo functionality in three ways:

- via the standard turbo_sw pin header;
- via the BIOS option;
- via CTRL ALT +/- shortcut.

Seems like I've connected turbo_sw the wrong way — it doesn't do anything at the moment. Not sure how that's possible, though — it's a three pin header for a triple wire connector.

BIOS option works and speedsys shows that CPU is slowed down to 386@40MHz levels (DOS 6.22 takes a really long time to boot). The manual, however, says that "de-turbo" performance should be at 286@8MHz. Going to make a Wing Commander test soon.

The Pentium 60/66 machines were a major jump from the 486 most people had back then. I used a 486/160 for a long time before I jumped to a P166, the early socket 4 machines were expensive unless you got a Packard Bell. Speaking of Packard Bell, they started that stupid trend of not putting a fan on the heatsink and using a case fan to blow over it (and many systems died because the case fan got clogged).

Is your P60 an FDIV-bug equipped model?

Is your P60 an FDIV-bug equipped model?

No. I ran the division test from here in Win 3.11 and got a correct value.

This board seems to have turbo functionality in three ways:

The manual, however, says that "de-turbo" performance should be at 286@8MHz. Going to make a Wing Commander test soon.

I have a socket 5 board (SI54P-AIO) , and with a P75, it which will be between your P60 and a P66 pentium.
There is a turbo switch according to the manual of my board, but not detailed like your's.
Only a Turbo / Deturbo switch funktion is described in the bios part...

I've tried using Turbo button again. Turns out, it simply doesn't do anything on a working system. If you push the Turbo button and reboot, then you get the performance equivalent to the "de-turbo" option in the BIOS. Would be great to figure out a way to get Turbo mode without rebooting. The manual says the following:

Changing the Turbo mode may be prohibited by an operating system or application software. For example, the CPU speed cannot be changed with the hot keys when the CPU is in Protected Mode.

I also ran some benchmarks:

According to SpeedSys, that should be about the same as 386DX-40. System Information puts turbo performance at half of 386DX-33.

I've tried running WC1 and the weird thing is, it seems perfectly playable. I don't have a real 386 to compare it with. Tried running it in DosBox at 3000 cycles and the speed seems identical. I thought Wing Commander needed a 386-class CPU?

Still can't figure out the speed of my Turbo mode. For the time being I've set the LED display to 60/8 since Intel manual says it's 286@8 in Turbo, although I doubt that (Wing Commander lists 16 MHz as minimum system requirements).

Tried Phil's USB2MIDI trick to get MT-32 music in WC. Sounded really off — probably because I only had a cheaper USB adapter (not Roland). Guess it's time to finally get myself a real MT-32.

Today I learned that a 16bit version of Total Commander exists.

Total Commander (or Windows Commander, as it was called back then) began in 16 bits, actually, around 1993.

Nice build! Which keyboard is that?

Nice build! Which keyboard is that?

Doesn't really have a lot in the way of identification. FCC ID is E5XKBM10140, so it's probably a 1993 keyboard made by BTC. Some Packard Bell keyboards have the same FCC ID, but a completely different design.

Basically, it feels like a generic cheap keyboard, but with a metal base, better build quality and period-appropriate lack of Windows key.

For all intents and purposes this machine does feel like a high-end 486, just less picky about hardware, better documented and requires less configuration. But I can definitely see why it would be a weird choice for an upgrade back in the day.

I setup a P60 in about 2000. My Am5x86-133 ate it for breakfast, lunch, and dinner... then for breakfast again. I think some socket 4 boards were built with really crummy speed considerations.

EDIT: I later sold that socket 4 motherboard on eBay and felt really bad about doing that. It was so so slow.

Awesome system - many years ago I bought 2 similar boards(no idea if the were "revenge" or not) because I always liked the P60 - it was, for me, The Pentium.
Played through DoomII on one of them(overclocked to 66Mhz) and loved every minute of it!