why not ide to m-sata. I've used those a lot. These things here are beast mode. I think I am the only person on vogons who uses them. When I tested this thing I was able to fully saturate the Ultrabay bus on my T43 think pad. That means T43 uses Ultrabay system that is a sata 150 bridged into ide for the harddrive. I was able to fully saturate this with one of these adapters.

There also is just sata to ide adapters and you can just use a normal SSD.

Anyways those Jmicron I think its what they are using Ics worked fine with a 440bx. I can't say for sure if they will work or a antiquated IDE controller.

why not ide to m-sata.

For performance? Perhaps on newer systems that can support UDMA controllers. But in this config 1994-1995 NexGen VL-Bus this is unlikely to make any difference. A good SD/CF card is already comfortably above bus speeds.

I am curious if there is any persistent storage solution attachable to VL-Bus that can move bits faster than ~8000 kB/s.

The Promise chip (PDC20630) on the EIDE3200Plus card is one of (if not the) fastest VL-Bus chips and is actually running in off-specs mode given by my 43 MHz VLB...

that maybe true and all but ssds are internally faster than a CF card. You maybe able to max out the bus on just read speed, but write speed and random access speed will still be superior with a ssd over a cf. And cfs typically do not have internal cache which greatly increase random access time

that maybe true and all but ssds are internally faster than a CF card. You maybe able to max out the bus on just read speed, but write speed and random access speed will still be superior with a ssd over a cf. And cfs typically do not have internal cache which greatly increase random access time

Could be. I think I'll try to test that. SSDs are for sure faster than cards. The question is whether the superior internal performance can make a difference when interfacing through a very slow external interface. It is not just the absolute transfer speed thats slower, latencies, buffers, etc.

It is like not even the world's fastest super car can get you faster to work than your normal car through a morning traffic.

Thank you for checking this. That is quite a bit of difference in benchmark results. I'm interested to see if using the same micro-SD card on both versions changes this at all. I personally use a SanDisk Extreme PRO A2 card. Unfortunately, the smallest size it comes in is 64 GB.

Need space for new projects, so it is time to finish this build.

First the NIC. HP J2573 with support for 10mb ethernet as well as 100VG AnyLAN standard (which I would like to use for my home retro LAN). 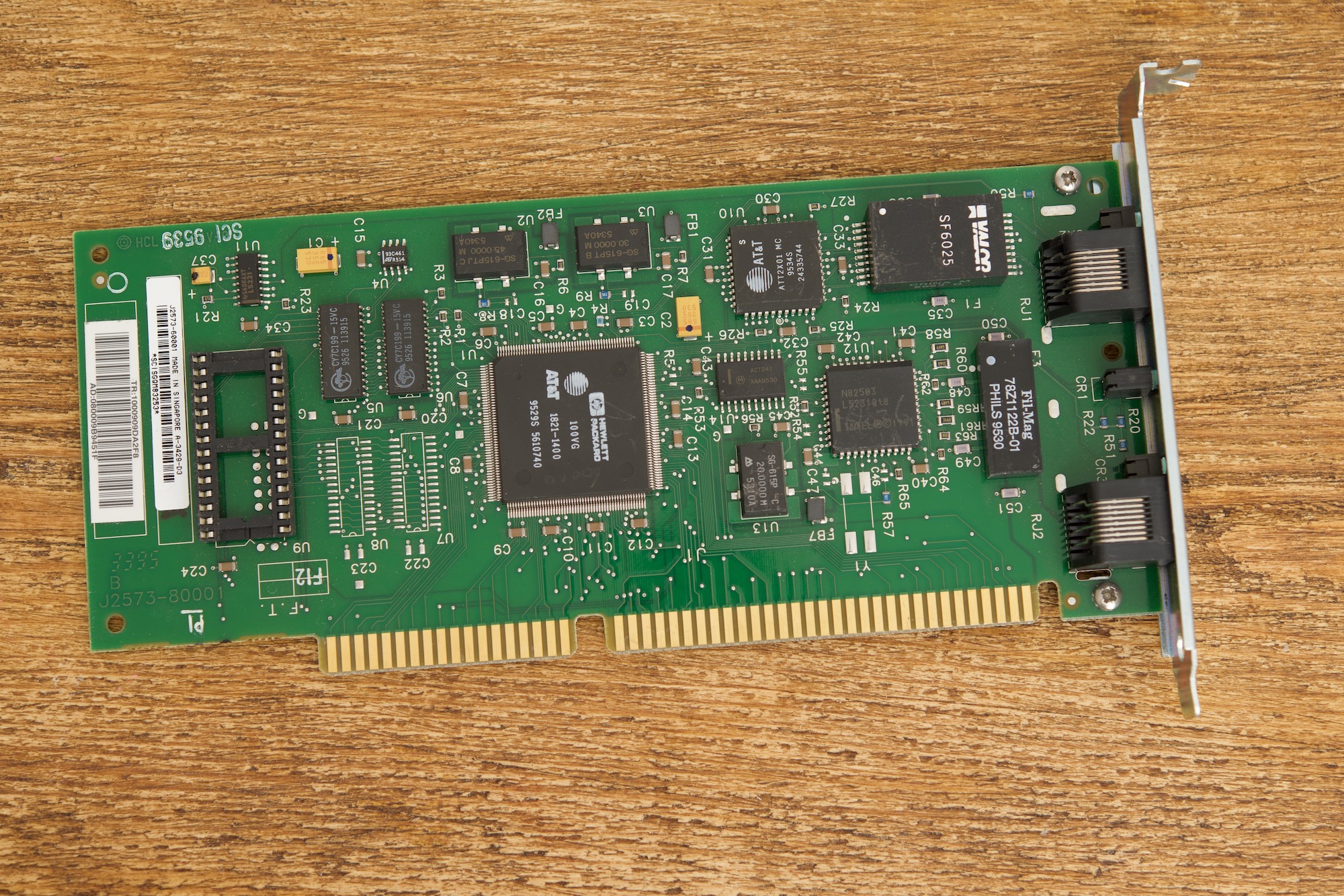 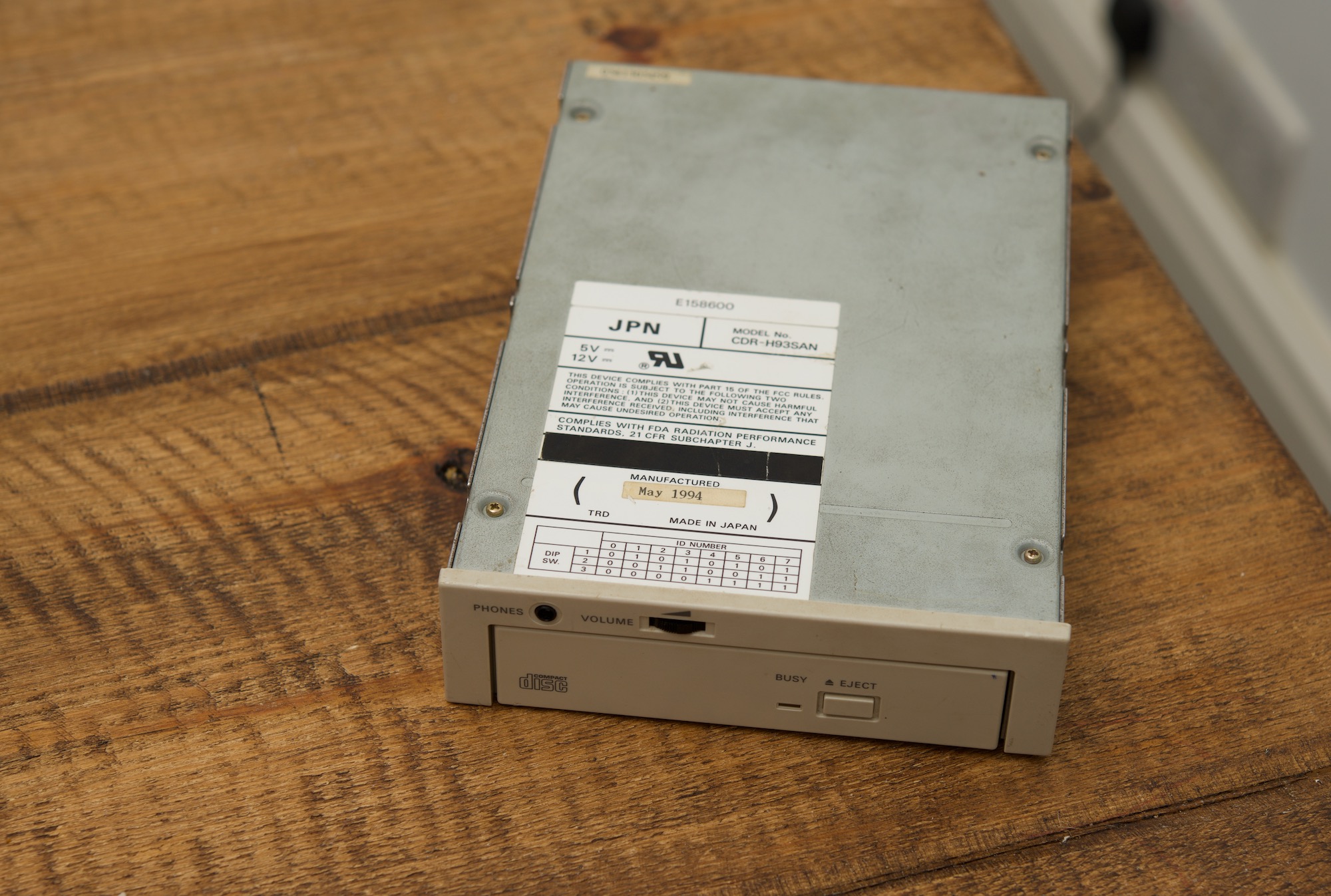 All cards put in leave me with one free ISA slot. Any idea what to put there? 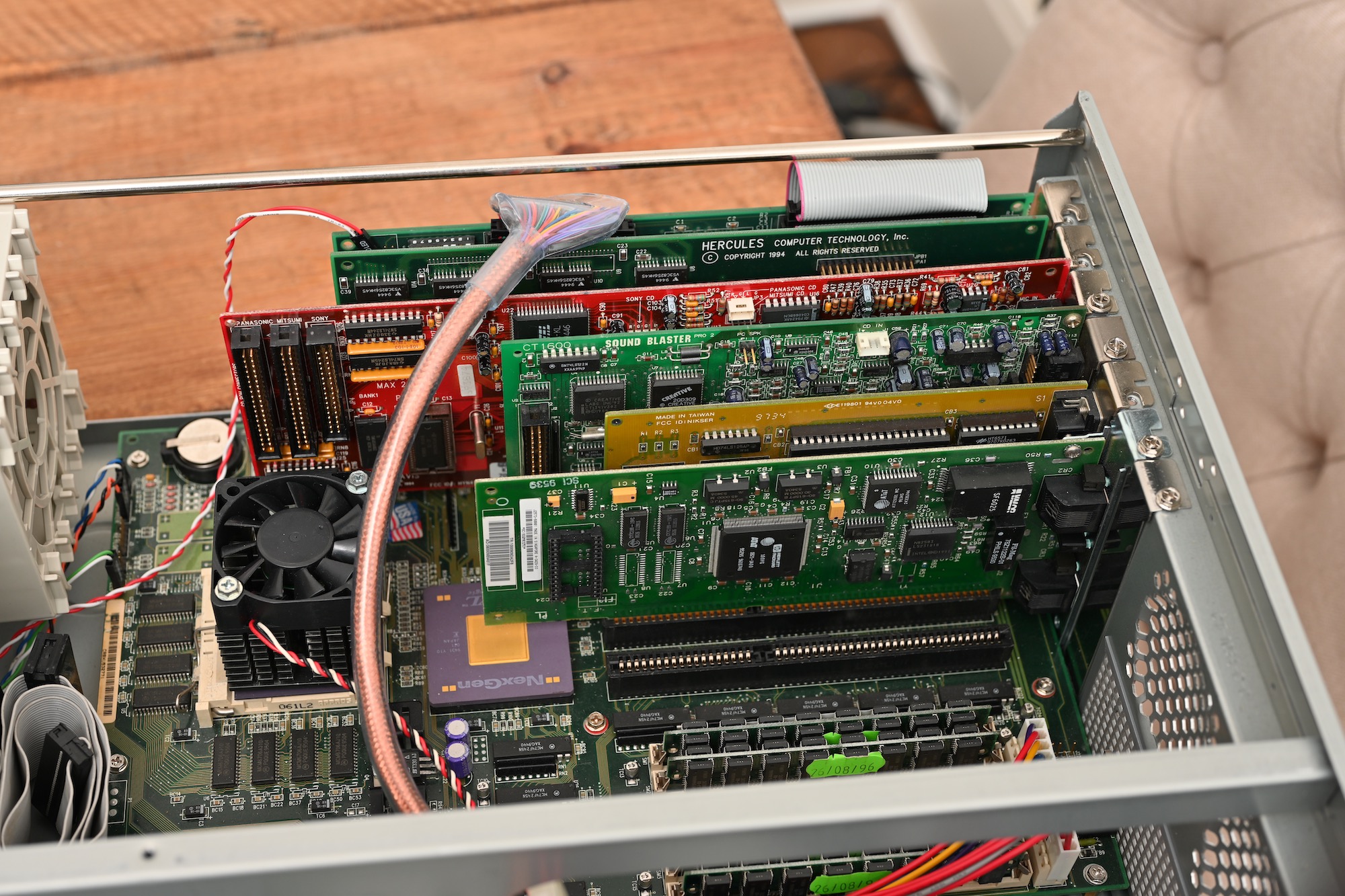 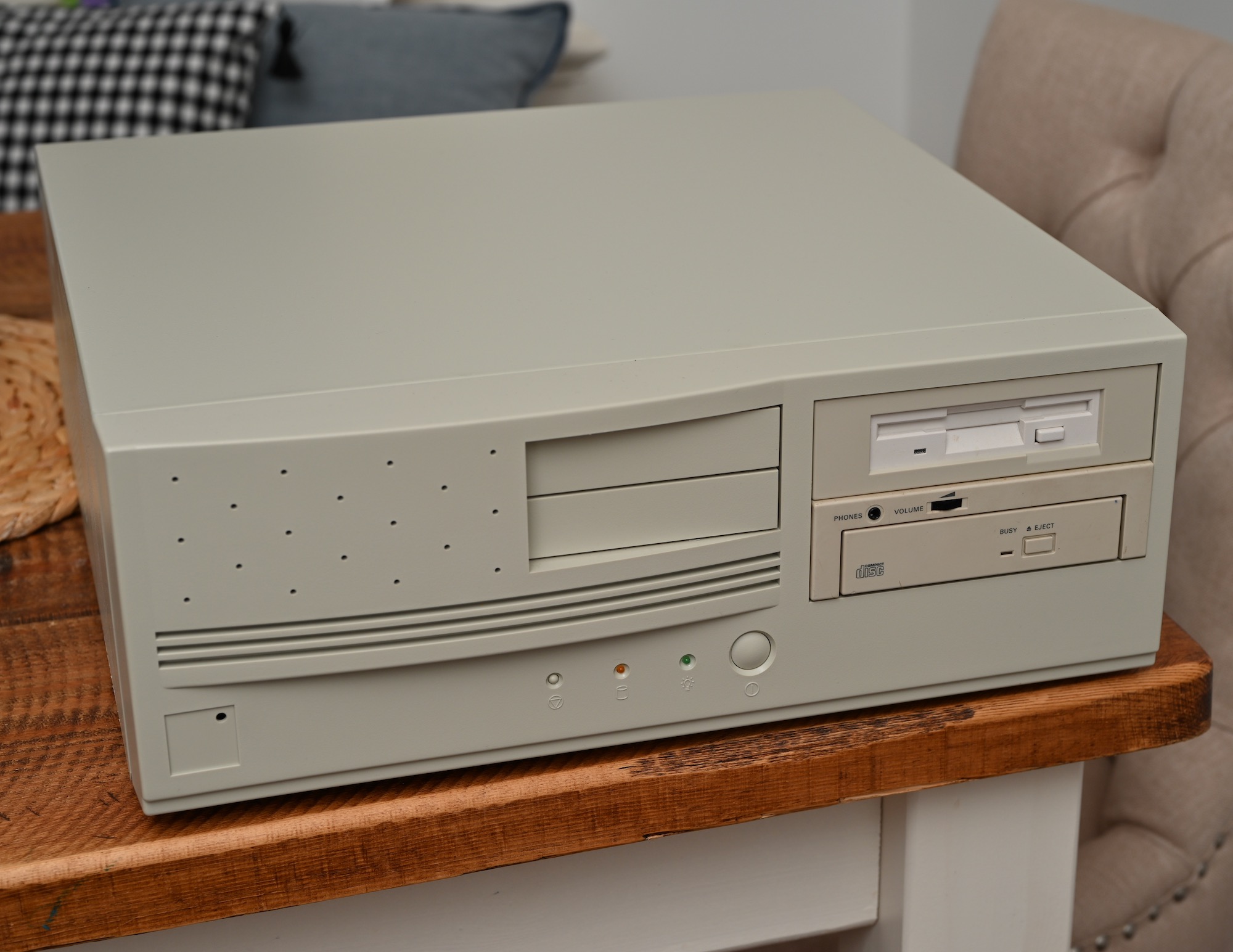 I don't like the colour contrast. The floppy drive is much brighter than the rest. Will try to source a less bright one. Also need to design a front badge.

Yeah, the white contrasting the beige bugs me too. I try to find floppy and cd-rom bezels that match. It is a lot more troublesome than matching black cases.

Case badge creation is the funnest part of the build. You could also consider painting the screw heads black so they don't pop out as much on the CPU's fan. I've considered this for my own builds, but haven't done it yet.

2-port ISA ethernet card. That's unique, from my standpoint anyway. I assume you are just going to use one of the ports?

2-port ISA ethernet card. That's unique, from my standpoint anyway. I assume you are just going to use one of the ports?

Yes. The first port is 10Base-T, the second port is 100Base-VG. They cannot be used simultaneously it is one or the other (100VG doesn't use Ethernet signalling). I plan to use the former until my 100VG network is functional. 100VG AnyLAN retro network is one of my other projects...

Nice build, love it. Have to put some time into building my Nexgen Nx586 PF system (PCI mobo) and get some benchmarks out of it 😀
Soon (ish), I hope.

Strange, P90 < P75 ?
So, NexGen's P-rating benchmarks were different than those of AMD and Cyrix?

It might be it is possible to find a benchmark where the P-rating stands, however especially in case of NexGen. the P-rating was more a wishful thinking. Its performance, at least on the original NxVL motherboard was nowhere near the P90.

IMHO the whole concept of P-rating was flawed.

First of all the performance of CPU can be improved 2 or more classes up by just running it on a modern motherboard. A P90 installed on a 430FX motherboard with pipelined-burst cache and EDO is a very different than a P90 with original Neptune or non-Intel chipset. Unsuprisingly vendors compared more often with the later rather than the former.

And then, shortly after Pentium release the software got optimised for the Pentium architecture and ran faster. Sometimes those optimisation helped other vendors too, but more often they did not.

And finally a single number cannot really express all nuances of CPU performance. Such as a CPUs with P-rating as fast as PR166 can be beaten by old Intel P75 in FPU test.

And no FPU certainly hurts it in comparisons when all of it's competitors had it and software was finally starting to take advantage of FPU.

I really like the idea of Nexgen VL. It just blows my mind that there's no provision for an FPU on them.

How does this perform ?
Can it play MP3's and Mpeg video ?

I really like the idea of Nexgen VL. It just blows my mind that there's no provision for an FPU on them.

Gotta wonder if any of the old coprocessor upgrade cards that fit in an ISA slot would help or make things worse?

Surely an x87 on an ISA card exists?

I just stumbled into one of these systems, factory built by "IMC Computers" with a model number of 286-9173. It was a Craigslist find, I assumed it was a 286 at first from the model number but when I cracked it open to check for green battery death inside was greeted by the gold cap "Next Gen" motherboard chipset and a larger/more modern than expected CPU with a fan.

The beige desktop case is marked with an Alaris model number of SYS-DT30-001200, FCC ID is JYBRYVL8011 which seems to correspond to the motherboard/CPU, not sure if it's a manufacturing partnership or if the sticker just came with the mainboard and was SoP to adhere to the case below the IMC model number.

It came stock with an Alaris made NCR "Skyeagle" VLBus Graphics Accelerator (rev C2) based on the 77C32BLT chipset + 2 MB of vram, a DTC2278E VLB I/O controller , 8 megs of EDO memory in 2 x 4 meg SIMM's, a Western Digital Caviar 2850 hard drive and 3.5 + 5.25" floppy drives standard. It had a bad Creative Labs 4x CD-ROM drive and SB16 CT2290 sound card installed that was causing havoc with cable management, so I swapped the SB16 for a lower profile ESS 1868f card in a different slot + a working CD-ROM drive to give it basic multimedia capabilities.

Mine came equipped with Nx586 / P100 CPU and 256k of cache, the BIOS is a pretty basic AMI affair but gets the job done. I had no problem installing DOS 7.1 and seeing all of the 814 megabyte hard drive in LBA mode. Bog standard without the Skyeagle VESA drivers or other optimizations in the mix it produced a 76.9 Superscape benchmark, 19.2 in Playerbench and a 2134 gametic score in the Doom high detail benchmarks, all from the Phil's benchmark suite.

It "feels" faster than any 486 I've used, but observing the Doom benchmark there were some odd stutters along the way I've not seen on other systems. I'm not familiar with this video chipset compared to the usual Cirrus Logic / ATI / Trident / Tseng / S3 options, so I need to do some reading on recommended optimizations. it's certainly an interesting addition to the stable compared to the usual 486 / VLB boards I've dealt with.