TL;DR
I was able to acquire this Socket 7 system that I am nostalgically attached to and that I have upgraded to suit my DOS/Win95 retro computing needs:

Background Story
The company that provided (and actually still provides) business IT solutions for my dads business back in the 90s used to sell hardware by Dutch manufacturer Tulip back then. (Tulip went out of business about 15 years ago.)
Some time around 1994 my dad received a complete system from them to use at home, which was a Tulip Impression Compact, equipped with a 486-DX2 66 MHz and running Windows 3.11. This was the first PC we had in our home and later (when my parents bought a P166MMX-based laptop) became the first PC that my brother and I could call our own. This system was, in terms of form factor and looks, very similar to the Vision Line dt that I'm going to show in this thread. Some years later - my brother and I were already sharing a P2-400 with TNT graphics, a Vision Line dt was decommissioned at my fathers business so I could have it. Although it was already outdated in terms of hardware, and never meant to play games on in the first place, it was still good for web browsing and other lightweight tasks. When we finally got broadband internet connection, I transformed the Vision Line into a home router using the lightweight fli4l linux distribution. By underclocking and undervolting the CPU (passively cooled) and removing the HDD (fli4l would boot from a single floppy disk), I was able to make it absolutely silent. It was running rock stable, reaching uptimes of >1 year, and served its purpose very well for 3 or 4 years. When it was replaced by a wireless home router, it went into storage and was probably taken to the scrapper by my parents some time later.
So for the last two or three years, I have been trying to find one - for entirely nostalgic reasons. A few weeks ago I finally found an ad, someone wanted to get rid of 5 or 6 old PCs. First they did not want to sell the Tulip separately and wanted local pickup only. But I started a friendly conversation, telling my story, and could convince them to ship only the Tulip. It cost me 40€, shipping included. It needed a good cleaning on the outside, but was pretty neat and clean on the inside.

Different Mainboard Models
The Vision Line dt came with at least two different mainboard models, both Socket 7. The earlier TC48 used the Intel 430VX chipset while the later TC76 uses the 430TX.
Of the TC48 there are at least two different variants, one does support split voltage (MMX) processors, the other one doesn't, because it is not fully populated with the required components.
Only a few days after receiving my unit, that was equipped with the TC48 in the non-split-voltage version, I found a TC76 on eBay and got it for 15€ shipped.

Building my Vision Line
My goal with this system is to use it as my main retro system for Windows 95 and DOS gaming. To achieve this, I made the following changes to the original system:

The OS of choice is obviously Windows 95 OSR 2.5, nothing special. It turned out to be a bit tricky to find the drivers for the ethernet controller and the 430TX power management controller, though.

Bottomline: This is a fairly compact but very capable little machine that brings back lots of good memories and will definitely stay in my collection.

Today I decided to level up my game on this one.
Swapped the Voodoo 1 for the Creative 3D Blaster Banshee PCI, added an Adaptec AVA-2904 SCSI Controller and replaced the DVD with a Pioneer Slot-In SCSI CD-ROM drive from 1998. 😀

I've come across some Tulips back in the day. Not so strange considering I'm from The Netherlands myself 😜

I never really got into the desktop model PCs since I was never a fan of non-standardized motherboard formats (I wanted as much as reasonable to be exchangable to make it easy to mix and match parts), so I never ended up with a Tulip motherboard. Or at least I don't think Tulip ever made standard AT or ATX motherboards?

My first PC was a Mycom build PC, which I kept so I never had to re-purchase the parts as I still got everything (except the printer. Because I basically don't like printers 🤣).

Reply 3 of 10, by Anonymous Coward

The best part of this system is the keylock with the matching key. I guess those were still kind of around during the mid 90s, but rarely in OEM builds.

Hello,
I am buying this "mysterious" Tulip computer (photo by the seller, strangely there is no model on the front).
It should be a Pentium 166 but I don't know if it has been upgraded.

May I ask if/how did you disable the onboard VGA?
Thank you

Cool, congratulations on this find!
The BIOS doesn't really have an option for disabling the onboard VGA, but it has a switch named "Force on-board VGA" that I have set to "No" (under Advanced --> Integrated Peripherals).
Still, the S3 shows up in the Windows Device Manager, but I disabled it there. I didn't have any issues with this solution.

Hey thank you so much for your kind feedback!
I should receive the Tulip today but "unfortunately" I know yet that my version has AT24 onboard graphic so I'll use my S3 Trio 64V+.

A couple of questions: there are some PDF Manuals available? Why my PC doesn't have the model printed under the Tulip logo?

Manuals --> I have never been able to find anything online, unfortunately.
Model under logo --> No idea to be honest 😀

Have you received your unit? Does everything work?

Hi!
Yes I received my unit and it's in great shape: there was a Sound Blaster AWE32 inside it! ;D
Yesterday I disassembled and cleaned the internal parts (very easy to do) and I also changed the HDD with a SD to IDE, in next days I'll clean the outer case and post some photos.
I'll probably swap some IDE cables with shorter ones since I don't need slave devices. I also disabled onboard COM, LPT, USB, modem and onboard GPU (I'm using a PCI S3 Trio 64v+) and I reserved IRQ 7 to ISA.
I really like this system!

And here it is! 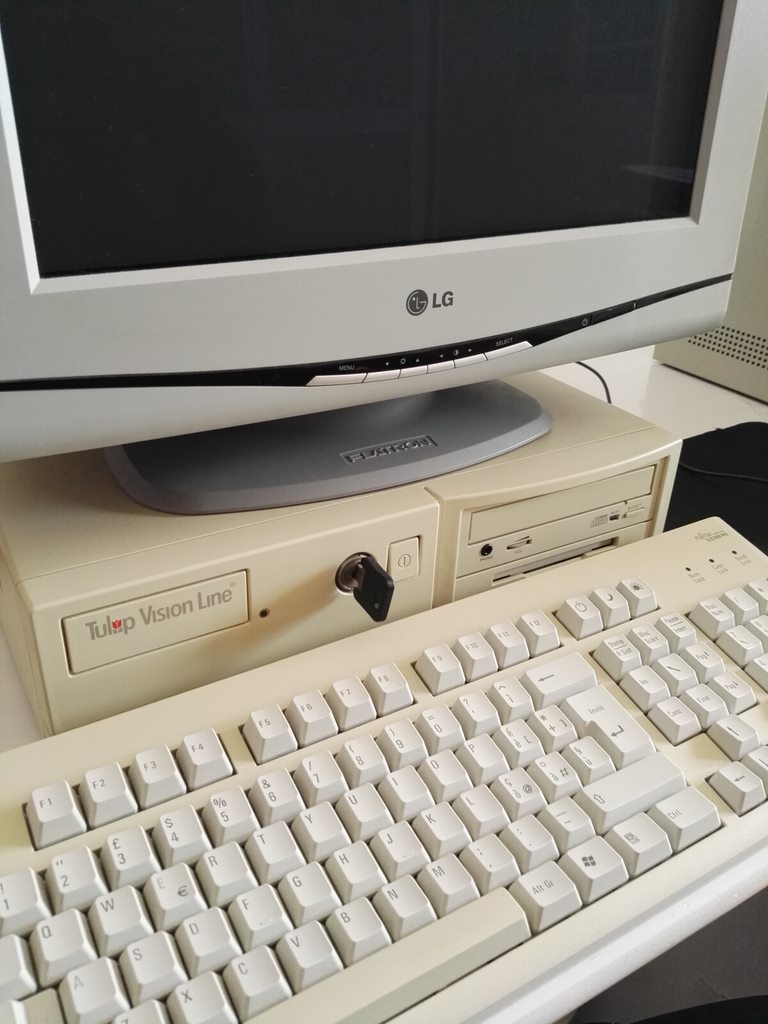 It's in PERFECT shape, cleaned and fine-tuned. I just need some shorter IDE cables for a better "cable management", and I should also investigate on why sometimes the CPU is detcted (on other softwares, not in bios) as 200 Mhz.

Now I need a beige CRT, I know!

That's a beauty, thank you for sharing! I am glad that one more of these nice little machines has found its way to a collector instead of the recycler.