I'm Guy, 48, from the north west of England. I work in IT in the nuclear industry and have been into PC gaming since I got my first computer, a Packard Bell 386SX16, when I was at Uni in the very early 90s. I bought a PC from a guy in Hungary on eBay recently but it was useless. It was a PII 400 with a 3Dfx card but it had a really obscure Soyo motherboard which made sorting out drivers nearly impossible and every singe screw in the thing was stripped. Anyhow, I sold it off for parts and nearly gave up.

Fats forward a week or two... My office at work is basically a 30 foot square company junkyard of old AV and computer equipment and I noticed my current PC amongst the mess. It was a Pentium 166 MMX with 256MB of EDO RAM and a Geforce 2 MX200 graphics card in a very solid mini tower case. After asking for, and gaining, a lot of people's permission (and proving to the company head of IT Security that the HDDs were to be removed and securely destroyed!) I was allowed to bring her home! I have a really smart Samsung 753S (thank you Freegle!) and a P/S2 keyboard I bought prior to getting the 1st PC so I set about getting her up and running. I initially used 16GB flash to IDE adaptor but gave that up and used the 6GB HDD from the Hungarian PC because we all love that sound, right?

The machine ran beautifully but froze occasionally so I downloaded and burned a bootable Memtest86 CD and left it running. It turned out that 2 of the 4 SIMMs were faulty. One froze the machine up and the other one showed 30,000+ errors in Memtest86. Anyhow, she's now running beautifully with 128MB of RAM. The sweet spot of graphics card driver and DirectX version turned out to be 45.23 and directX7.0. 3DMark 99 kind of ran before but there were no textures, it runs perfectly with this combo though, albeit somewhat slowly. 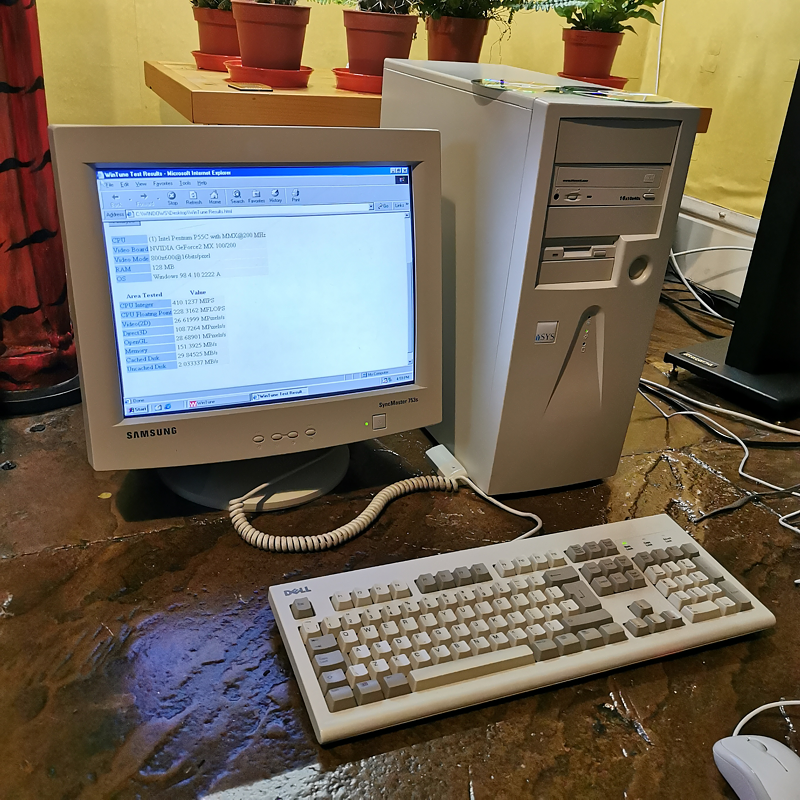 I don't have a sound card at the moment, I sold the AWE 64 the Hungarian PC came with *DOH!*, but I have a Sound Blaster Pro and some cheap beige speakers on the way so I'm looking forward to some retro-gaming!

Ha, ha, cheers framebuffer. It actually runs a Pentium 200MMX now, I had one in my collection but it proved to be dead so I snagged one for a tenner off eBay. Who knows why it had this odd combo, maybe the original graphics card died and had to be replaced 🤔?

Yes probably at some point they needed a new VGA and bought the cheapest one they could find, or something like that I guess 😀

So now it's a 200mmx with 128 edo ram and a significantly (for the PC era) capable graphics card plus (soon?) SB pro?

That there is a dream machine! Well it's powerful anyway. I have a 166mmx with 64 edo and some old 2mb graphics card and sb compatible, and that runs like a charm with win 98se!

did you quit the flash to ide because of nostalgia or what it slow / troublesome in use? my one is using a very old 4gb hdd. I did try an sd to ide setup but gave up after failing to persuade the mb to accept it and knowing i had the spare hdd. at some point the hdd will give up though, and then i'll be back to the other approach

Your workplace sounds like Wiretap, a member here that works in US Nuclear Powerplant , seems like a good industry for retro hardware.
Hopefully once work knows your into retro computing they'll allow you to take more stuff home.
I work for a MSP but based onsite for only a couple of clients who have gotten to know me and now they are happy for me to take stuff, saves them disposing of it after all.

I still run spinning rust as the boot drive on all my rigs. Partly for sound, partly as I have free access to drives (see above)
older dos machines that don't support 40+ GB drives I'll use a CF card as a 2nd drive with all my games as finding smaller capacity hard drives isn't so easy anymore.

That'll make a great dos/early 9x PC for sure

I actually started using the 6.4GB IDE HDD when the machine was locking up but before I found the two sticks of duff RAM. I thought it might have been the CF adaptor so switched to the HDD. Much to my disappointment, it's a very quiet drive and doesn't make all the awesome noises we know and love. On a related note, I was Googling recently and found that CPC sell Seagate approved refurbed 80GB IDE HDDs for £7.50 each so I snagged one to go in the spares tub!

And it's freezing again 🤦🏻‍♂️. The slightly good news is that I can trigger the freeze by doing a full surface scan on the hard disk which is ancient and a bit battered looking so I suspect it might be that. The machine will run Memtest86 all day long with the two good SIMMS so pretty sure it's not memory. I'll rebuild it onto a Compact Flash card and see how I get on. Fun these old computers, aren't they 😄?

Right, I think I've isolated the cause of the freezing. I noticed the CD ROM drive would spin down mid-install occasionally and the PC would freeze just idling after a few minutes if you left it doing nothing so I disconnected the CD drive. Touch wood, it's fine now. You can leave it idling for ages and it's fine.

Given that the current drive is a Liteon 16x10x40x, do you reckon I'd be better finding something more period correct ie a basic 4x or 8x drive and keeping it simple 🤔?

An old Plextor or Panasonic SCSI drive would be a great addition to this computer, and they're very reliable (some, if not all, have an all sprocket drive system, so no withering belts).

Very nice looking PC!
I would suggest removing 64 MB out of those 128 MB that you have now. This should improve CPU performance substantially, since the max L2 cacheable area for 430TX is 64MB (assuming you don’t have a Super Socket 7 motherboard).
Don’t worry, 64MB is more than a P MMX will ever need anyway... 😀
Now all that’s left is for you to add a Voodoo 2 and a nice sound card and you’re golden! 😁
Also, don’t be afraid to go for a 75MHz FSB (or even 83MHz if you motherboard supports it).

Flupke, Cheers, I might very well do that. I remember how highly regarded Plextor stuff was back in the day.

Bloodem, Unfortunately I can't. The board won't boot with a single stick so I assume it's pairs only. The board is 430HX and I've just google it. It will cache up to 64MB but will cache 512MB if it has the correct TAG ram - are there any utilities that will let me find out one way or the other? There are no socketed cache chips on the board. I'd love to try some faster chips (I have K5, K6 and K6-2 CPUs in my collection) but Supermicro were clearly very conservative - the board only has 50, 60 and 66MHz clocks with 1.5, 2.0, 2.5 and 3.0x multipliers.

...
It will cache up to 64MB but will cache 512MB if it has the correct TAG ram - are there any utilities that will let me find out one way or the other?
...

Cheers Disruptor, Will have a look after work.

Excellent. I ran the utility and I don't have the dirty tag issue and all my RAM is cached properly.

That is a great looking system. That'll run most early to mid 90s games very nicely.

Cheers Chris, I've successfully installed and run the original GTA, Quake 2 and Need for speed 3 so far. I think having the 'better than average for it's era' GPU helps. Just looking for Wipeout now...

Very nice those are a great selection of games. Wipeout is a ton of fun I hope you can get a copy soon.

Interesting. I was looking around the 'net yesterday afternoon looking at CDROM related things and found a firmware update utility for my suspect Lite-on CDROM drive. I copied it over to the Win 98 box and ran it and it offered to upgrade the firmware from something, something-B to something, something-K so I thought 'What the heck?' and ran it. I then got distracted and left the computer alone until I went to bed. I nudged the mouse and the screen turned back on and it was fine, it hadn't frozen. The machine is freshly built and has the Unofficial Service Pack 2.1A on it this time so I'm not sure if it's that or the firmware upgrade that seems to have stopped the freezing but it's progress!

FINALLY!!! I've sussed out why my machine was freezing.

I did a bit of googling and read that the P166 MMX CPUs were generally very overclockable so I whipped off the extra jumper I'd refitted and it runs just fine at 200MHz 😁.

PS. Just to add, I run a very good CPU cooler made of solid copper with a good fan so thermals aren't an issue here.