Like many I was awaiting the remastered GTA games with... well, trepidation, but now they're here it has encouraged me to build a Windows XP PC to play my original disk copy.

Now if I was advising a sensible person I'd advise them to make pretty much any Core 2 Duo and 8000 series or greater GPU and it will work great. But I am bored of those PCs so I decided to use my weird socket 478 board: It's a Biostar 954GC-M4, sold in 2011, that uses DDR2 RAM, SATA 2 and a PCI-E x16 slot, but uses Socket 478. I've got a 3GHz HT Prescott that is hiding under a Thermaltake Sonic Tower passive heatsink. It's mechanism of securing to the motherboard is... not great! 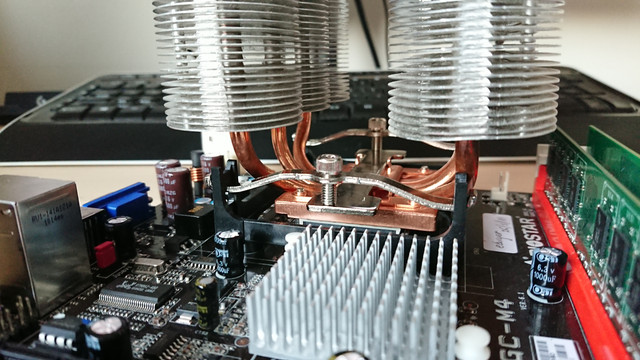 Putting it in the case I've got 2 120mm intake fans in the front and a 120mm exhaust fan in the rear. Hopefully this will keep it cool... 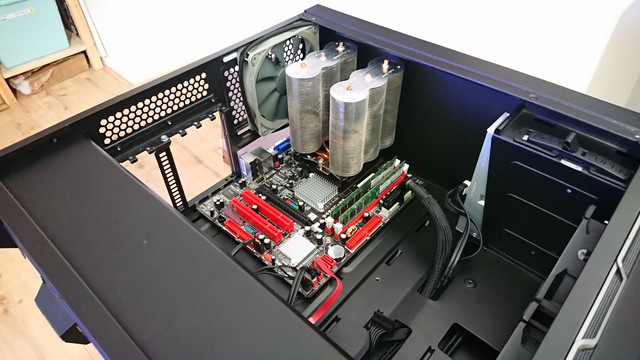 I'm using a Soundblaster Audigy 2 ZS (as recommended by the game!) and a Radeon X1950 XT(X?) The 1950 is a blower card so hopefully having it close to the soundcard doesn't cause any problems. I've paired this will 3GB of DDR2 running at 667MHz and a 120GB SSD. The motherboard is quite happy booting from optical disks using SATA which a few early SATA boards don't seem to like. 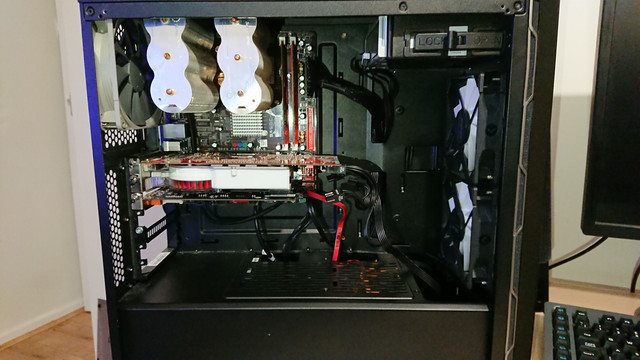 It actually runs pretty cool at about 45c, and is quiet except for the GPU that has a very distinctive fan noise. Kind of like a race car v8 growl and it is preferable to general fan noise at the same volume. It's pretty quiet when idling thanks to fan speeds set by the card's firmware (or whatever), rather than the drivers.

San Andreas runs well, which I was thankful for considering it runs badly on a 2.4Ghz Northwood. Maybe it's the hyperthreading. This PC actually hits the sweet spot of getting me under 50fps but more than the game's frame limiter rate of 25. If you run the game too fast the physics get a bit weird, with this set up I can leave the frame limiter off and not have it run too fast. (for some reason it crashes when I run it with MSI afterburner, which could limit it to 30 or 40 or something). I think I'll keep using this set up for a while and try some Quake 4, Oblivion... general XP gaming.

Nice setup. Somehow I never actually played San Andreas on my XP machines. I started it late, on my Vista C2Q system (which now runs Win7).

Good thing you've got a passive cooler for the HT Prescott P4, because mine is using the stock cooler and it's loud as all hell!

Yes that's my main reason for using it. I bet its either cooler or the same temperature as the stock cooler too.

Tremendous rig! I had no idea s478 motherboards with pcie existed.

Now I am planning to do a similar build around the p4 3.0HT, only with an SB X-Fi and an fx5500 or Radeon 9550 (I don't want to buy another graphics card haha), the idea is that at least it runs the GTA SA and also I want to finish Vice City. I just have to wait for the Zalman Fatal1ty for the Pentium to arrive, otherwise the poor thing will melt itself using the stock cooler

Unfortunately the 9550 will really struggle with SA. I tried one myself and I was getting around 20FPS.

Part of the reason for this build was because in 2006 I got my first own compute - a £450 laptop. This had a 1.7GHz single core and Intel GMA950 graphics. GTASA ran like complete arse so it's good to make an XP PC that can actually run it!

Does this setup allow you to max out the all the driver enhancements such as AA, AF, etc?

GTA SA is my 2nd most demanding XP game an wondered how low can I go.
Of course it's fine on my S775/GF GTX 590 rig but my next rig is quite a step down S478/GF 6800 Ultra where it does struggle if enabling everything

Nothing wrong with running San Andreas on such a spec imo, it's what I did back in the day.

I currently have the game installed on my 2 rough 2003-era builds (P4 Prescott 3.0 HT in 1 & an Athlon XP 3200+ in the other), using era-specific graphics so I can't dial up all the settings. But with moderate settings tweaks it is playable and SA-MP works quite nicely too for a bit of LAN or online gameplay. GTA San Andreas deathmatches with friends are quite fun!

I remember dabbling in SA:MP, absolute madness but also very cool. I remember loads of stunt ramps and flying around following a motorbike gang around the coast of Las Venturas. Probably my first online experience now I think about it...

The heatsink is true eye candy, and I see (per previous post) you have become comfortable enough to set it upright...

I used GTA:Vice City as a parameter in my last build. It had to play that. I have been a fan of it since the month it came out. The Commodore boot screen vid still just gets me (it was MY first computer 😏) I still have an issue with the Voodoo 3 and the cinematic elements, but still very playable! GTA San Andreas is on my bucket list for sure...

I beat GTA SA on a PIII back in the day (I still have that machine!). It too is a bit of a weird build, in that it pairs a PIII processor with DDR memory. If memory serves, I was getting anywhere from 15-40 fps and averaging a cinematic 24-25 or so, with most visual settings at or close to high @ 1600x1200. It wasn't ideal, but it easily got me through the game. Probably processor bottlenecked, even at the high (for the time) resolution.
PIII-S @ 1.63 GHz with 2 gig of RAM and an AGP 6800GT, by the way.