Can you provide references for the Disney Sound Source / Covox Speech Thing support? I have a system that I use a Sound Blaster in purely for the OPL3 chip, and this would be a good "upgrade" for additional features if it's compatible.

Can you provide references for the Disney Sound Source / Covox Speech Thing support? I have a system that I use a Sound Blaster in purely for the OPL3 chip, and this would be a good "upgrade" for additional features if it's compatible.

Rescued a Dell XPS 420 that was headed for the crusher, dont really care much for the contents but the case is in really nice condition, not sure what I will do with it yet but it being a Q6600 it might make a nice little Linux box or I could clean it up make sure its complete and working then sell it on.

I dont own a Q6600 in my core 2 collection and the case is really shiny "Drools".

Its also got a unknown GPU in it ..but spec on line suggest it might be a 8800GTX which will likely be dead, dying or ready to explode when powered up.

The Ensoniq AudioPCI 1730 is a neat card. It's compatible with Windows 3.1 and NT 3.5x as long as it's the Ensoniq branded card (not Creative branded). It's one of the few PCI cards with drivers for old versions of Windows. They sound pretty good, too.

That looks like a nice catch.
It probably was in my search alerts but I've laid off the Konvolute a bit, it really becomes too much clutter, eventually. Sometimes I pick them up locally to get some exercise, basically - my low key substitute for a dog.
Same with exotic ISA sound - there's no end to it.

That set, I might have raised you to 21 € as the rule of thumb for random ISA sound is "a tenner" for me. Maybe five more for the genuine gold-plated ASUS spdif bracket as a useless trophy 😉
(I just got outbid by 100 % on a socket 3 VLB board and that's probably a good thing, space being finite... caught a GF4200 for a tenner with shipping, though)

Are you really using those or are they merely collectibles to you?

That SCSI controller omitted on the Aztech - happened all the time. Many SB16 "multi CD" fell back to a single interface.
SCSI CD-ROM drives were "relatively" more common in early days when CD-ROM per se were just as elite as SCSI.
Little later, not so much - ATAPI drives already being way cheaper.
Is the remaining socket plain IDE or is ATCD proprietary? Might have been a retail bundle, so they knew the SCSI would not be needed.

Only SCSI sound cards back then I can remember were a rather rare edition of SB Pro 2.0 and, I think, one SB16. And the PAS16, not even that rare.

the SCSI tended to be kind of useless anyways since it wasn't bootable and didn't support bus mastering. you're always better off just putting an adaptec 1542 or 28xx SCSI card in your 486 if anything, or a 2940 if it has PCI.

For the Aztech card I had to dig a bit deeper. Could just reach, that it's an Aztech card. So I googled for "Aztech ISA" until I found a matching picture. Aztech Galaxy NX Pro. What confuses me a bit is, that it's missing the socket for the SCSI controller, the connector pins for SCSI, the jumpers for SCSI as well as those red thingies between the two connectors. I only found pictures of cards that were missing the SCSI controller but had the socket. Were these cards actually sold this way or did someone desolder them?
There something interesting about this card: It's the only one that's compatible to Disney Sound Source / Covox Speech Thing. Quite interesting addition for my collection.

To the SCSI controller: A SCSI controller without DMA on a sound card is quite useless except for 2,4x - 4x speed SCSI drives in non-multitasking operation systems like DOS. It has no BIOS either.

Got this little beauty today for about 40$

Nothing rare or fancy, but it looks great and gives some serious retro vibes.

That thing may not be rare.

But boy, is it fancy.

Nothing rare or fancy, but it looks great and gives some serious retro vibes.

Comedy retro vibes are of course given by Mattel Barbie and Hotwheels machines.

I wanted to add a few more Live!'s to my sound card selection shelf before they become $15.00 a piece in 10 more years.

Wow 40 bucks that's a steal. I have a very similar P4 system we used as a point of sale computer at my mom's restaurant from 07-2012. There great systems built like tanks and very upgrade friendly.

that is a beautiful monitor! wonder how the specs are, some of those OEM late-era CRTs were surprisingly capable.

That thing may not be rare.

But boy, is it fancy.

My thoughts exactly. IBM computers have that premium feel to them too. Just wish it was the beige version, but beggers can't be choosers 😀 and for 40$ I couldn't say now. Now to find a way of sneaking it past my wife... 😜

Comedy retro vibes are of course given by Mattel Barbie and Hotwheels machines.

Yeah those machines are really cute. They weren't sold in my side of the world, but the OEM for them did sell the unbranded version. They keep popping up in the on-line marketplace but sellers charge an arm and a leg for them. I saw one in december last year, listed for 130$. Too rich for my blood, considering it's not matel branded and the hardware is meh at best.

that is a beautiful monitor! wonder how the specs are, some of those OEM late-era CRTs were surprisingly capable.

The monitor is a 17" CRT with a flat screen. It can do 1600x1200 @ 75hz. The unit I got is unfortunately rather "well used" and a on the dim side, at least compared to the mostly unused Dell E772p monitors I'm hoarding. 1600x1200 is not really practical for it tough, because apart from the low refresh rate, at that resolution the picture is a bit blurry for my taste. It does do 1280x1024 @ 85hz tough, and it looks stunning at that resolution. Now I have to take it over to an acquaintance of mine who still knows how to fix CRTs, maybe he can get a brighter picture out of it like he did with my 19" iiyama vision master.

Got this very late Socket 3 486 motherboard with pipelined-burst L2 cache.

I've always wanted to know if the cache can help it to beat more conventional 486 PCI boards with UMC, SiS and ALi chipsets. 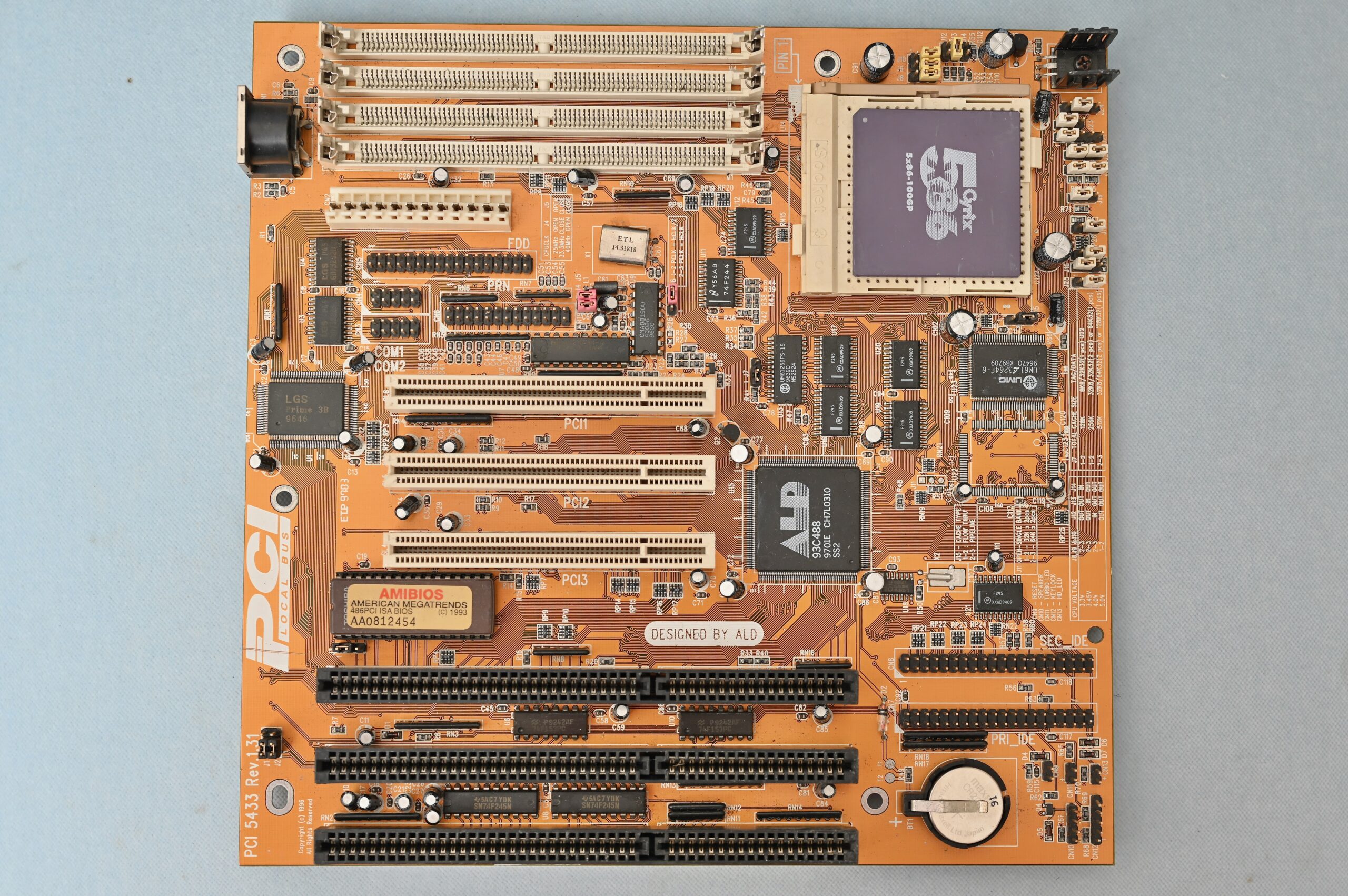 That's a beautiful motherboard. The layout is very tidy. I'm sure the engineer was very proud of his work.

I didn't know ALDI made Socket 3 motherboards 😜
Is it their own chipset, not just a relable?
I guess the cache might bring some advantage but non that might not be compensated by an otherwise less-than-optimal chipset.

Not so sure by the looks of it, but it might even have PCI local bus, what do you think?

Yes yes This is definitely sarcasm.

Yes yes This is definitely sarcasm.

It's just that this board is ca. 1996 and PCI is actually from 1992 - meaning, that PCI logo, at least relative to the board's size, is the largest one ever screaming at me, but from a time when PCI was truly NTWHA. 😉

OK, in all seriousness, I've asked uncle google and answered my own question: There was indeed an outfit in Hongkong by the name of ALD who designed this thing, including the chipset:
https://www.aldtech.com/products/chips/93c488/c488spec.pdf

And, while it well might be a top notch 486, I'm pretty sure it was never even intended to be a top performer.
All about it, compact, highly integrated single chip design and Cyrix CPU, says "Pentium era budget system".
It probably was optimized for price and stability, but PB cache was merely readily available back then and two chips much cheaper to realize than eight dip SRAMs.

There was a famous PC which really was sold by ALDI, in 1996.
That used the FIC PIO2 motherboard with VIA chipset and Cyrix 5x86:
http://www.amoretro.de/wp-content/uploads/fic … motherboard.jpg
- not a top benchmark contender, but apparently very stable and affordable.