Then a PCI S3Trio64V+ with lots of memory expansion sockets. 11€

And a basis for my "higher-end" pentium 2 class machine. 15€
A ChainTech 6ESA2 motherboard, which has ISA, PCI and AGP slots and has integrated ESS Solo-1 sound card.
I didn't know it before i got it, but it also had one of the most desirable Slot1 celeron - Celeron 300A. Definitely will try to overclock it.

Will be fun times ahead. Currently everything is ripped apart and being cleaned or soaked in vinegar.

Picked up this for my Aiwa PC, allows use of Sega saturn controllers (including light gun) and comes with a copy of Virtua Cop 2 that supports PowerVR?

Never heard about that version supporting PowerSGL. Could you provide more information? The card comes with a PowerVR chip, but it is used as a PCI bridge to the videocard (probably for lightgun functionality with regular VGA output).

The chip is indeed for use of the Sega Saturn Light Gun with a PC monitor, AFAIK

Now that's a motherboard. If you need assistance with the board, let us know. Currently fixing my Jetway/J-Mark OPTI-495SX 3/486WB board that suffered corrosion and trace damages.

Now that's a motherboard. If you need assistance with the board, let us know. Currently fixing my Jetway/J-Mark OPTI-495SX 3/486WB board that suffered corrosion and trace damages.

It's currently soaked with white vinegar. Keyboard controller socket is missing some pins already...
All removable chips came out fine. (were soaked in vinegar overnight and cleaned them this morning)

We'll see. Probably need to replace some sockets, maybe some ISA slots and don't know yet about traces on board.

I bought an ATI FireGL V7100 PCIe as a backup for the X850PRO PCIe I currently have in my LGA775. In theory it should be faster but I am too lazy to replace it for now.

Quick pull them out of the vinegar bath. I soaked a motherboard in vinegar once and it ate up the capacitors and diodes.
its okay for a quick cleaning and rinse but not good to soak for hours.

Acquired an AT midi tower case for my late 486 DX4 build. It does need some cleanup, fixing and retrobrighting but I like it’s calm and clean appearance.

This will be my first AT system which will make use of those fabulous ATX2AT adapters I got from xsecret.

Acquired an AT midi tower case for my late 486 DX4 build. It does need some cleanup, fixing and retrobrighting but I like it’s calm and clean appearance.

This will be my first AT system which will make use of those fabulous ATX2AT adapters I got from xsecret.

Nice, I have this very model in my collection, too. It was originally equipped with a Pentium MMX 166 MHz on an ASUS TXP4 motherboard, the latter still being in there. I have swapped the CPU for a K5, mainly because I didn't want another Pentium MMX machine 😉
The build quality of this case is not exactly great but not as bad as other cases of the era...

Don't get your hopes up, that board has an i440EX chipset, which - like the i440LX it's based on - theoretically only runs at 66MHz and in practice will rarely clock above 83MHz FSB (and that's a bad speed for PCI...)

Some of the P4 and Athlon64 pins are pretty badly mashed, but the rest is in good shape, if sometimes covered in excessive thermal compound (the pic was after an initial clean, but particularly the SoA CPUs are still messy as hell).

And the 'mystery' So370 CPU? It was the P3-650E. Plain old Coppermine, but with some translucent plastic shim around the legs. Doesn't look Intel-original, but it's pretty securely stuck there. Not seen this before. Anyone familiar with these?

Anyway, all I really needed was a SoA test-CPU. I Think at least one of those should have survived (not too sure about the Durons and the Tbred, they have chipped die coreners, but the Palomino and Barton look perfect). Nothing utterly compelling in the rest, but good solid spares the lot of them (if they work). Maybe one day I'll make a Pentium D system if I really have nothing better to do 😉

Bought some new variants of Diamond Stealth Trio PCI cards. Now I am not sure which are new and which I already had 😀

Very nice collection! Tell me how much did you paid?

Finally managed to add a SC-55 to the midi tower. Tested it out and it works great, then instantly opened it up and removed the battery. Battery was a bit crusty but hadn't leaked anywhere. 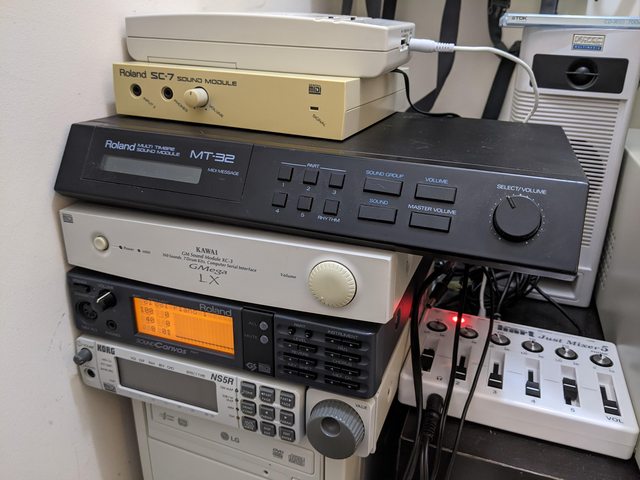 Very nice collection! Tell me how much did you paid?

I'd been looking for bits to make a P133 rig for a while. Got a nice little tower that needs a retrobrite, a PSU that needs a re-cap, a little memory, etc. But the two socket7 boards I have are dead. One won't detect ram, the other has no POST at all. I was going to pay through the nose for a decent working socket7 board, but then I found this in the skip bin at work: 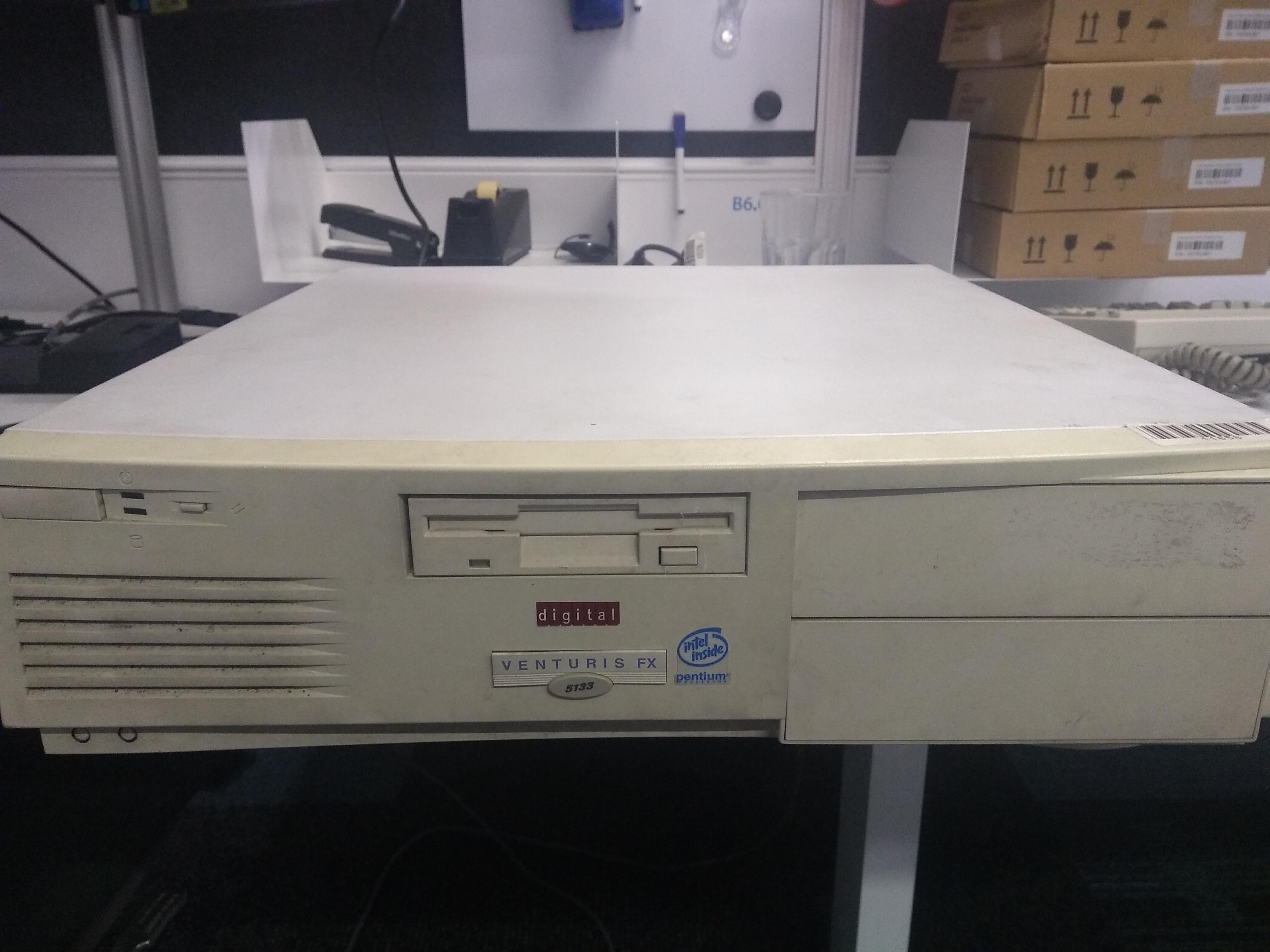 Don't see many Digital machines on here. This one is pretty exceptional. It's lived in a train workshop it's whole life. It was the machine for controlling the tracks and stuff for shifting engines in and out. It was full of train brake dust and crud. Needed to fill it with soap and get the garden hose into it to clean it off, that dust was so sticky. On the bright side it did have some really cool (win95) train and track control and monitoring software on it.

The only thing missing was the CPU, which someone decided they wanted, and left everything else. Cute wee CAS module, 64mb RAM, 1GB hard drive (which tests perfect too). Dropped my 133 CPU in there and it booted right up. 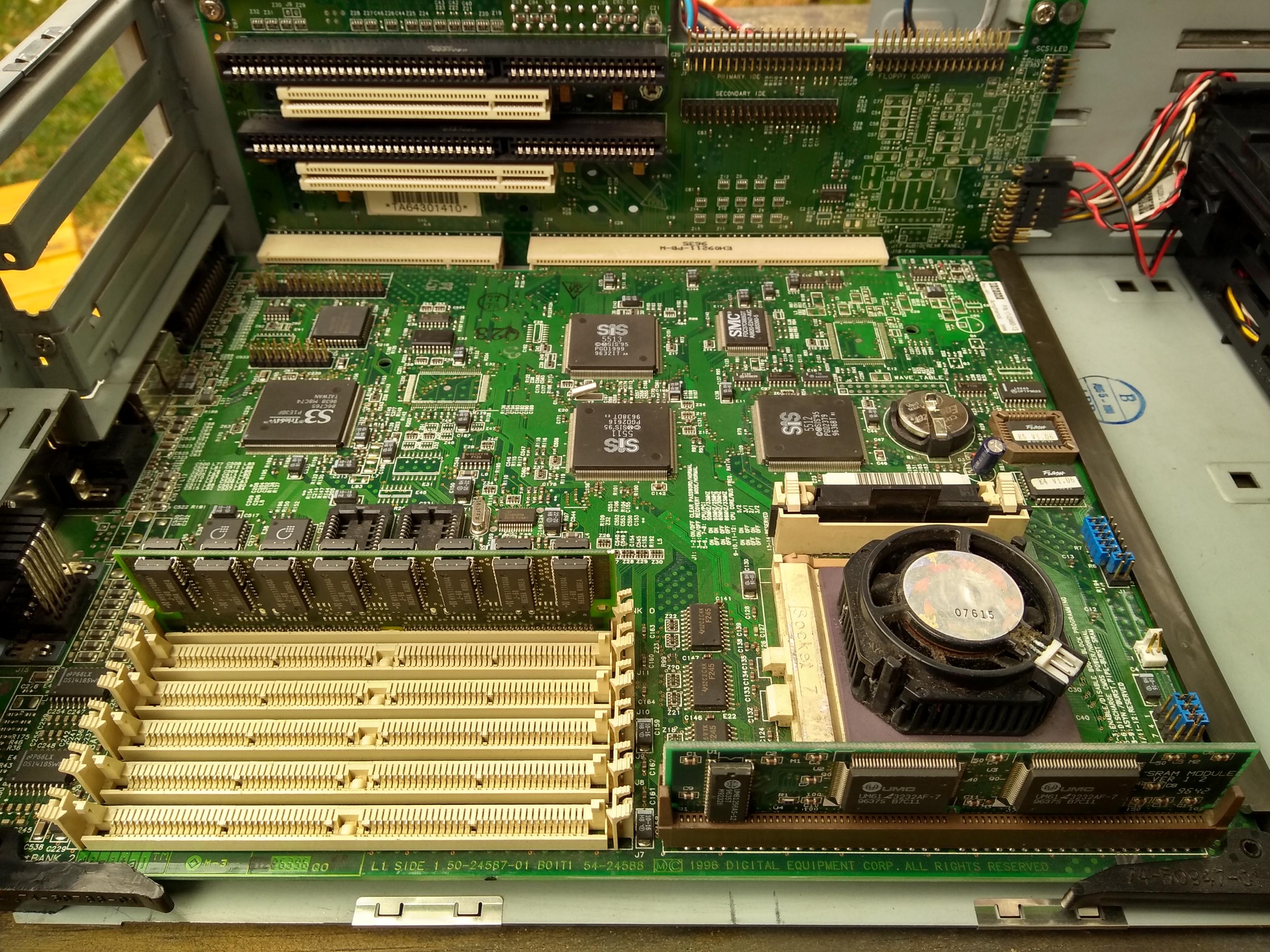 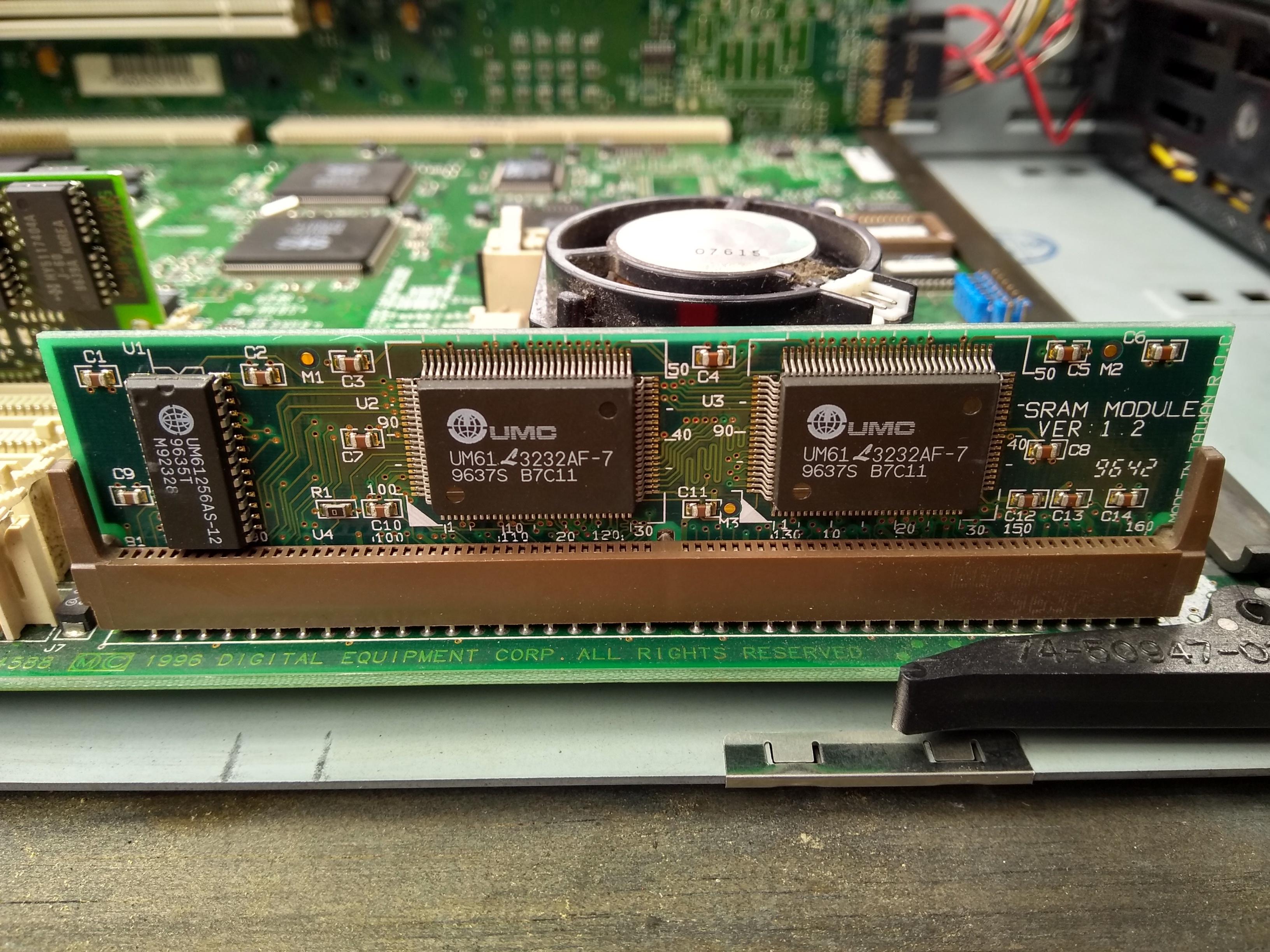 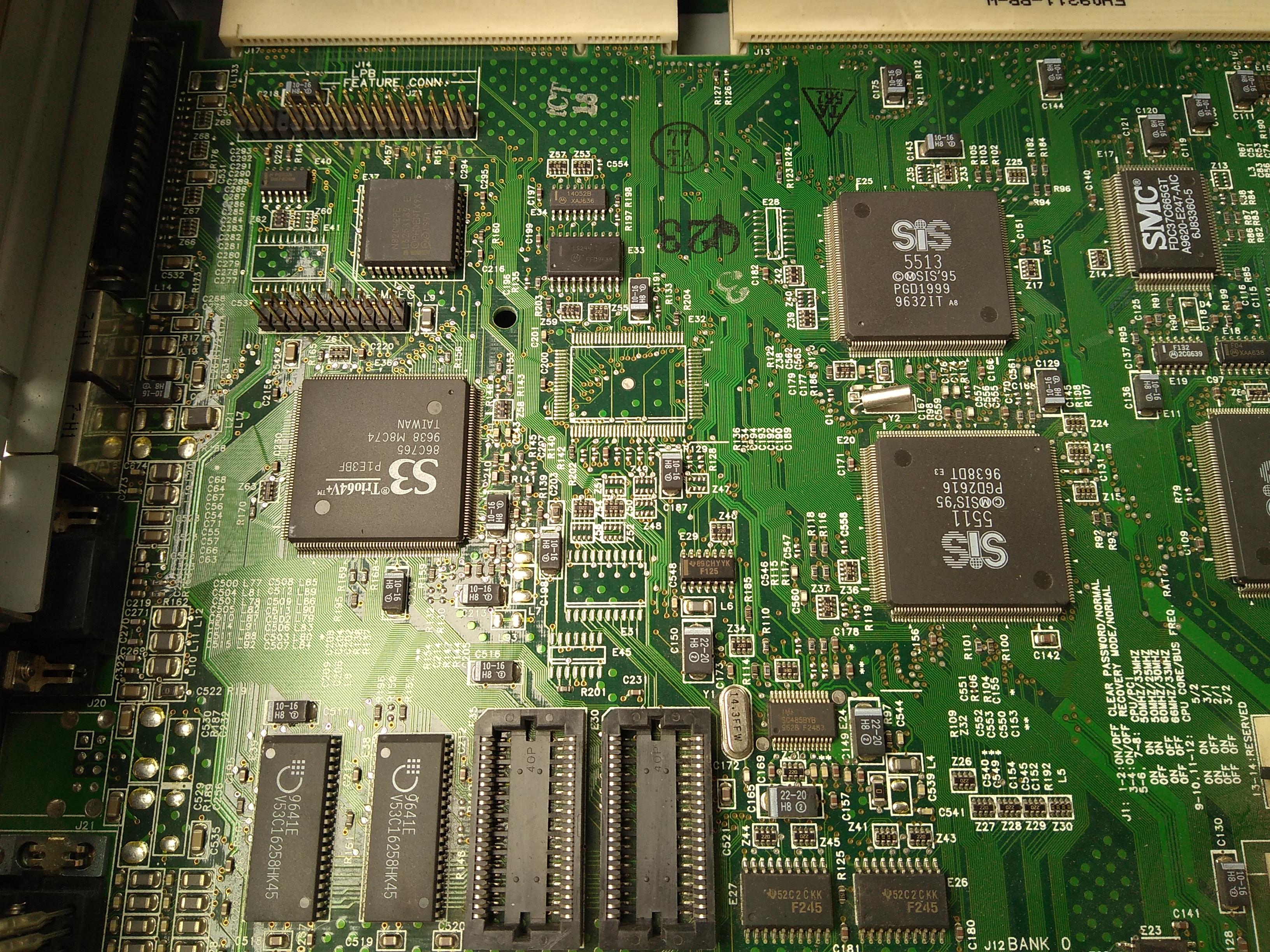 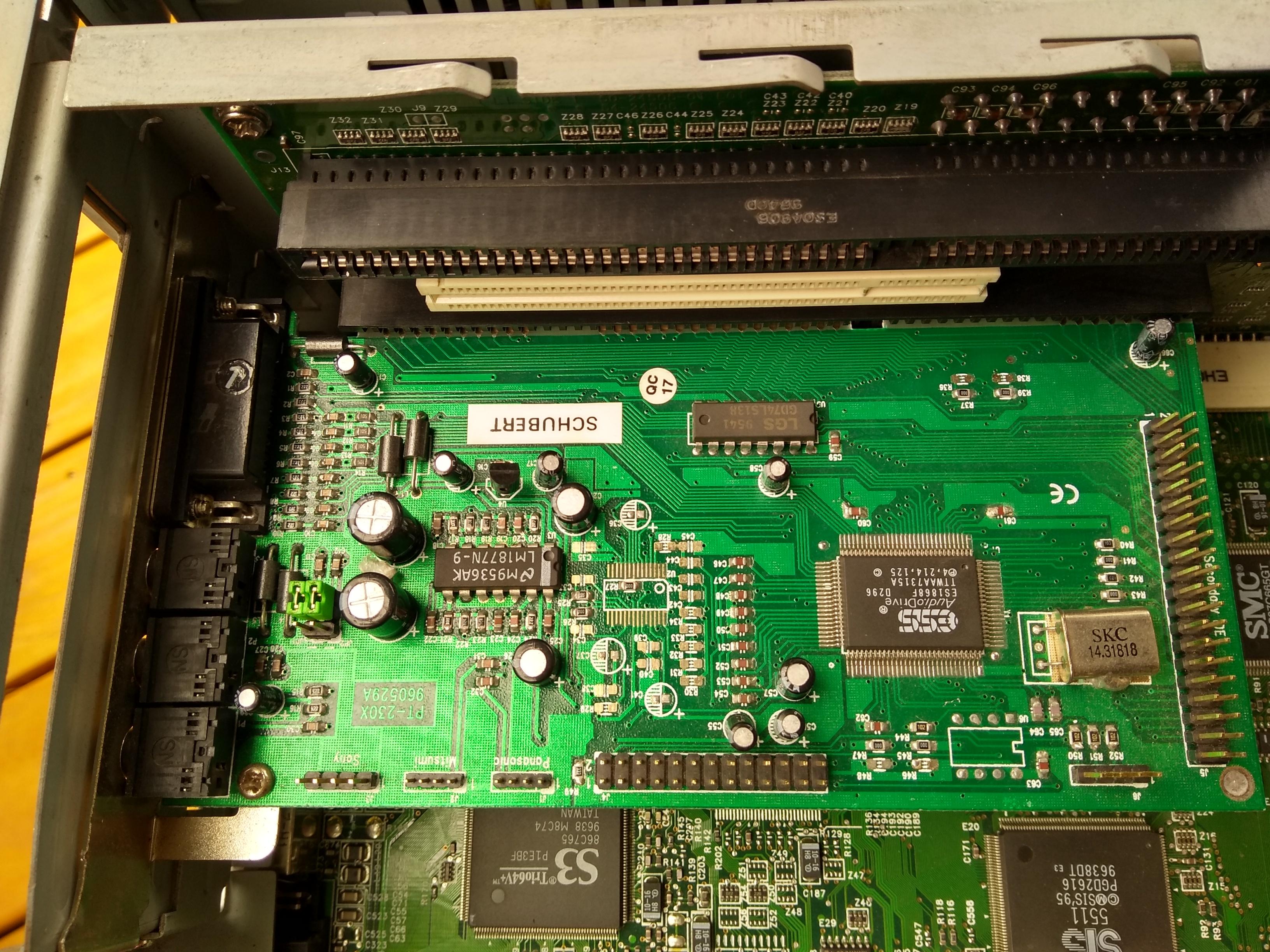 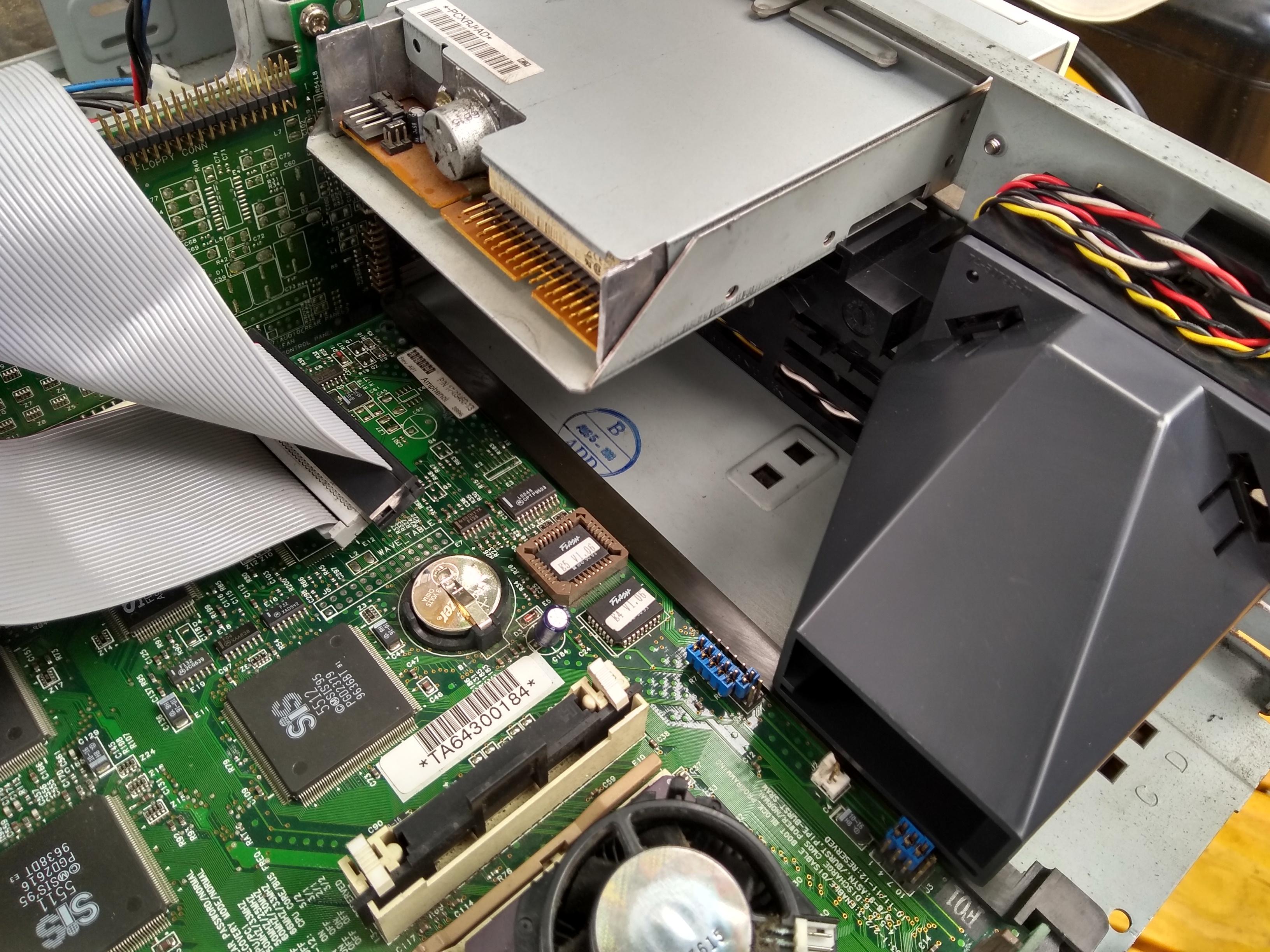 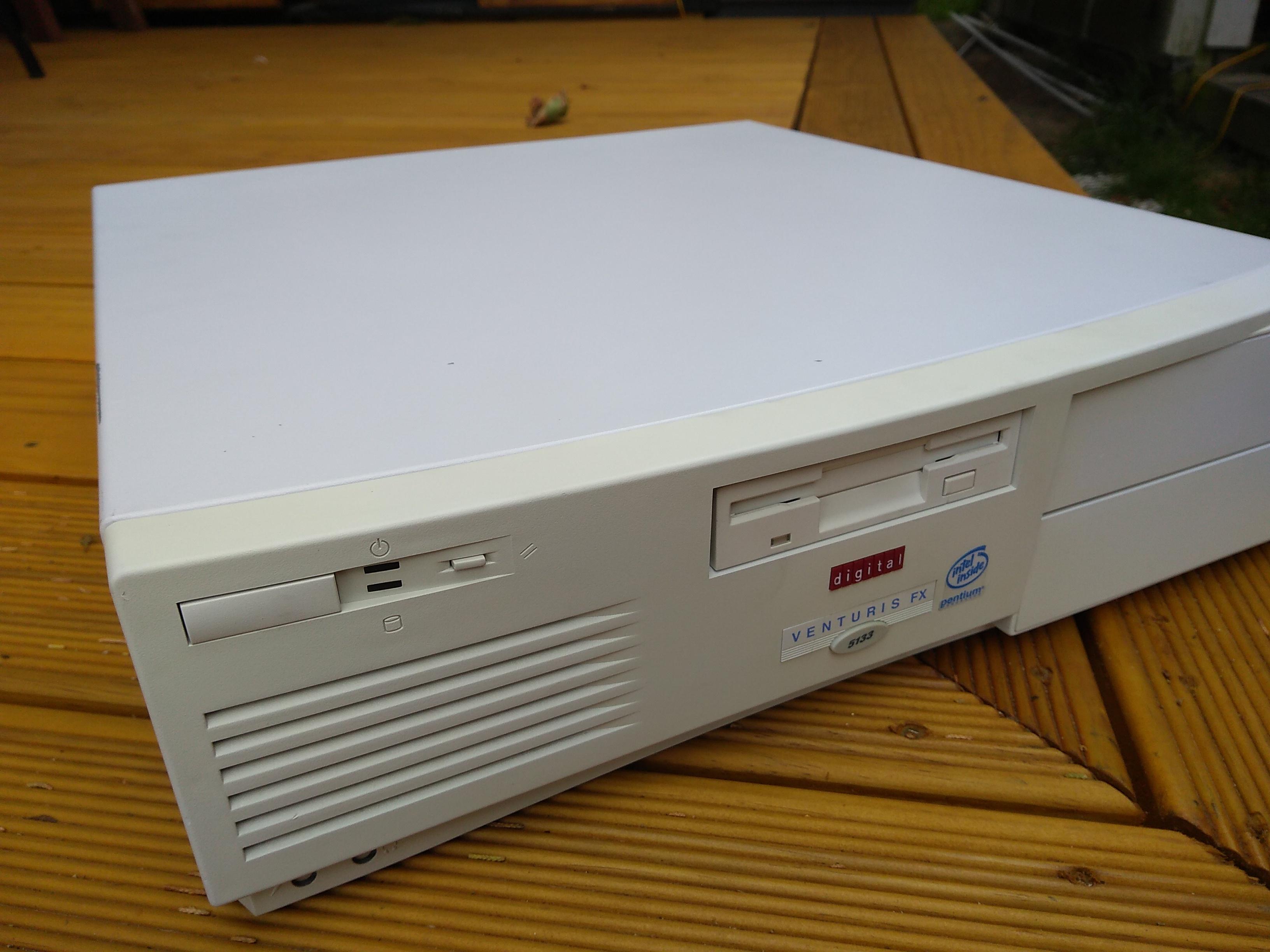 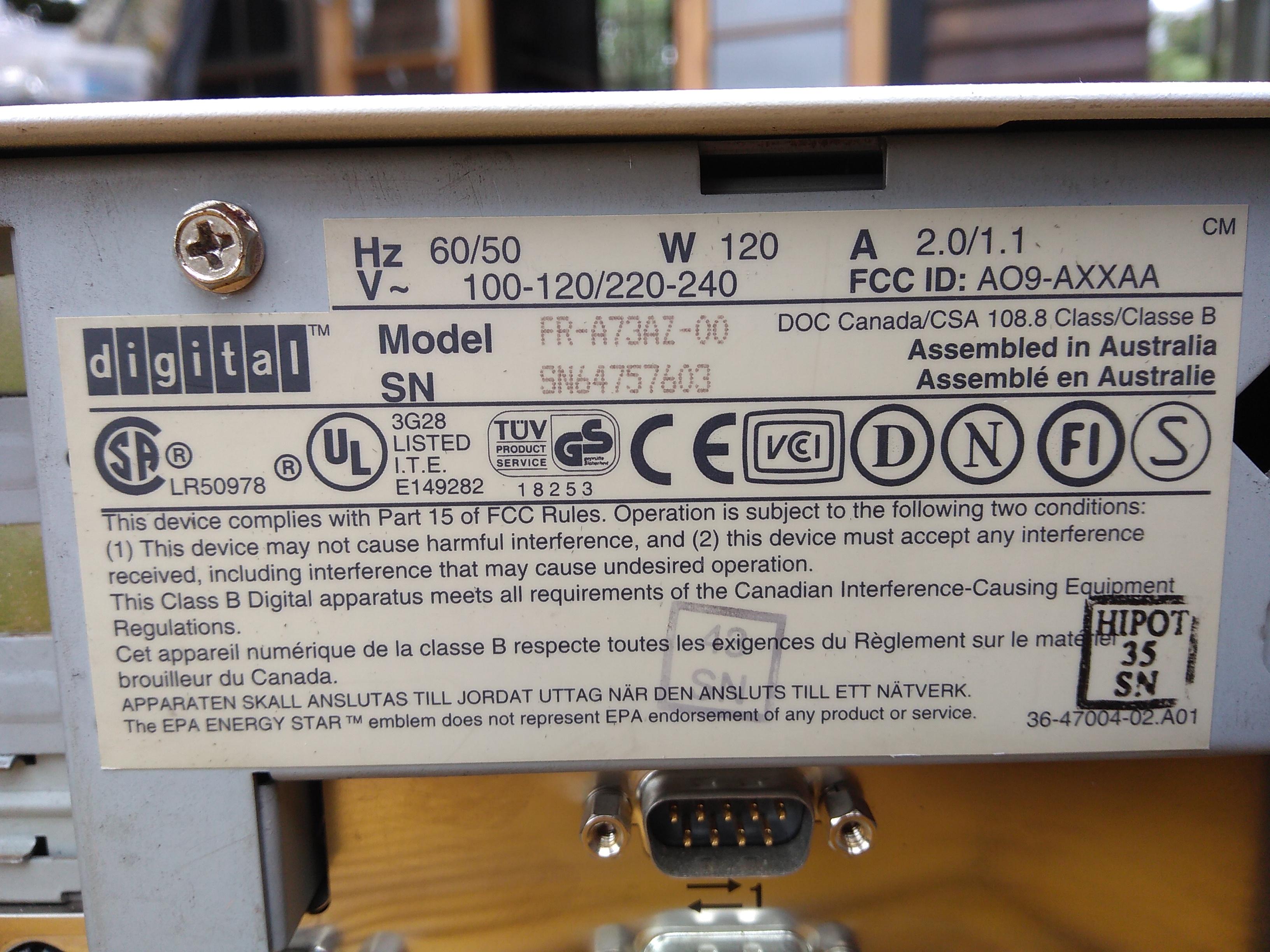 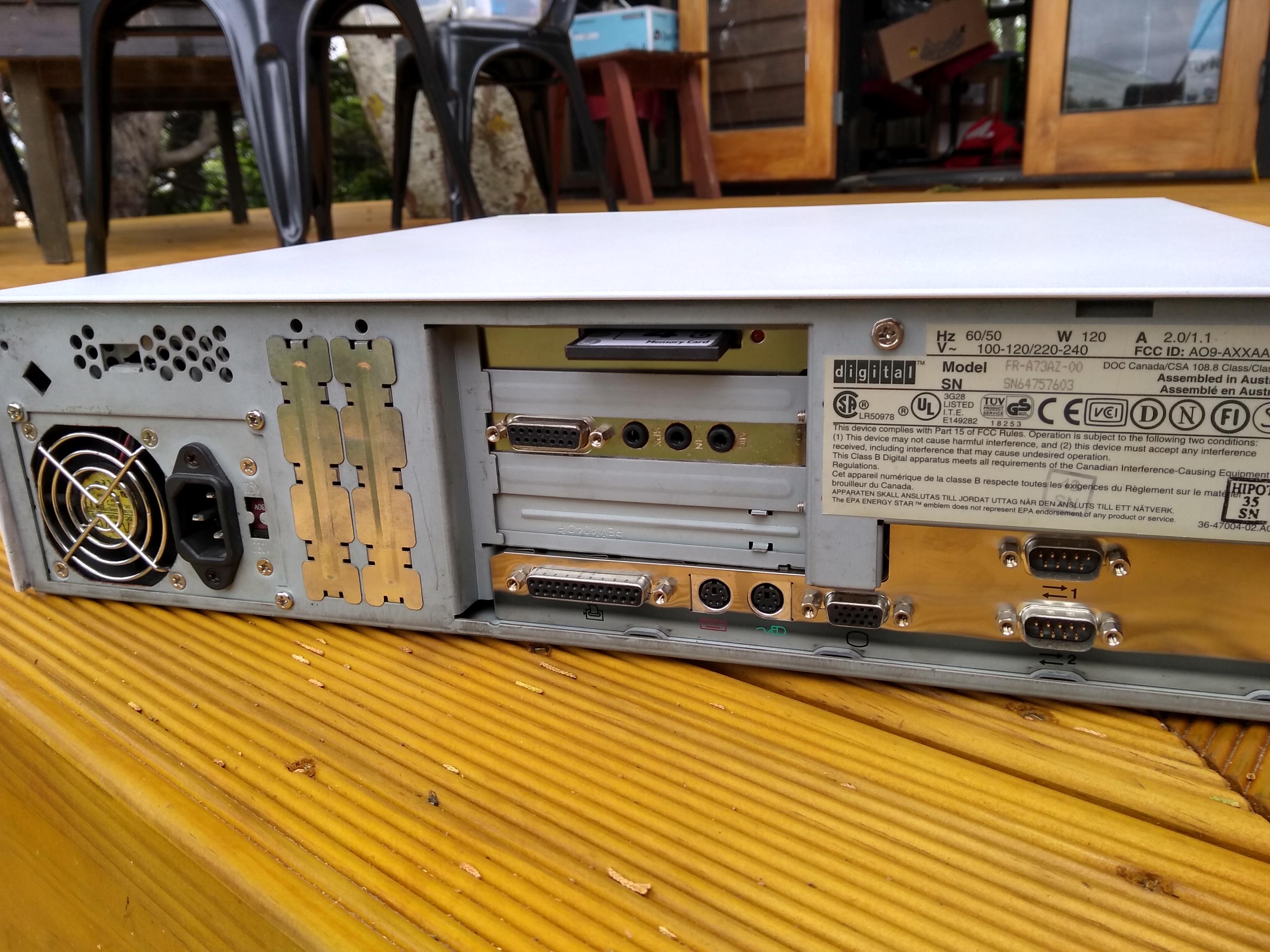 If anyone can tell my why the hell Cannon Fodder keeps on crashing on any machine I install it on, I'd be so happy! For some reason you can't quit the version I have either. You have to turn the computer off. 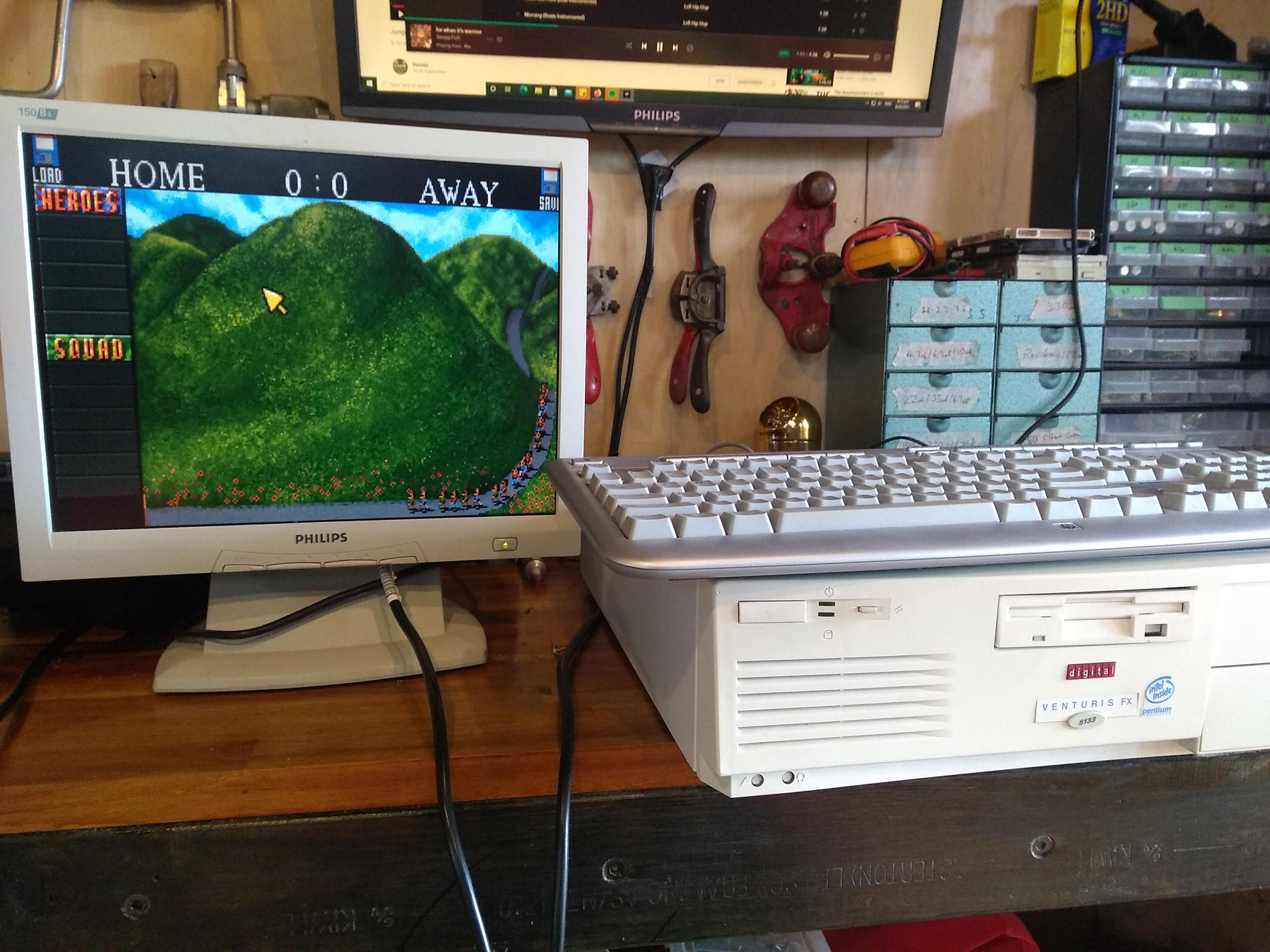 CF card upgrade, since I want to keep the original HDD with it's original factory software. 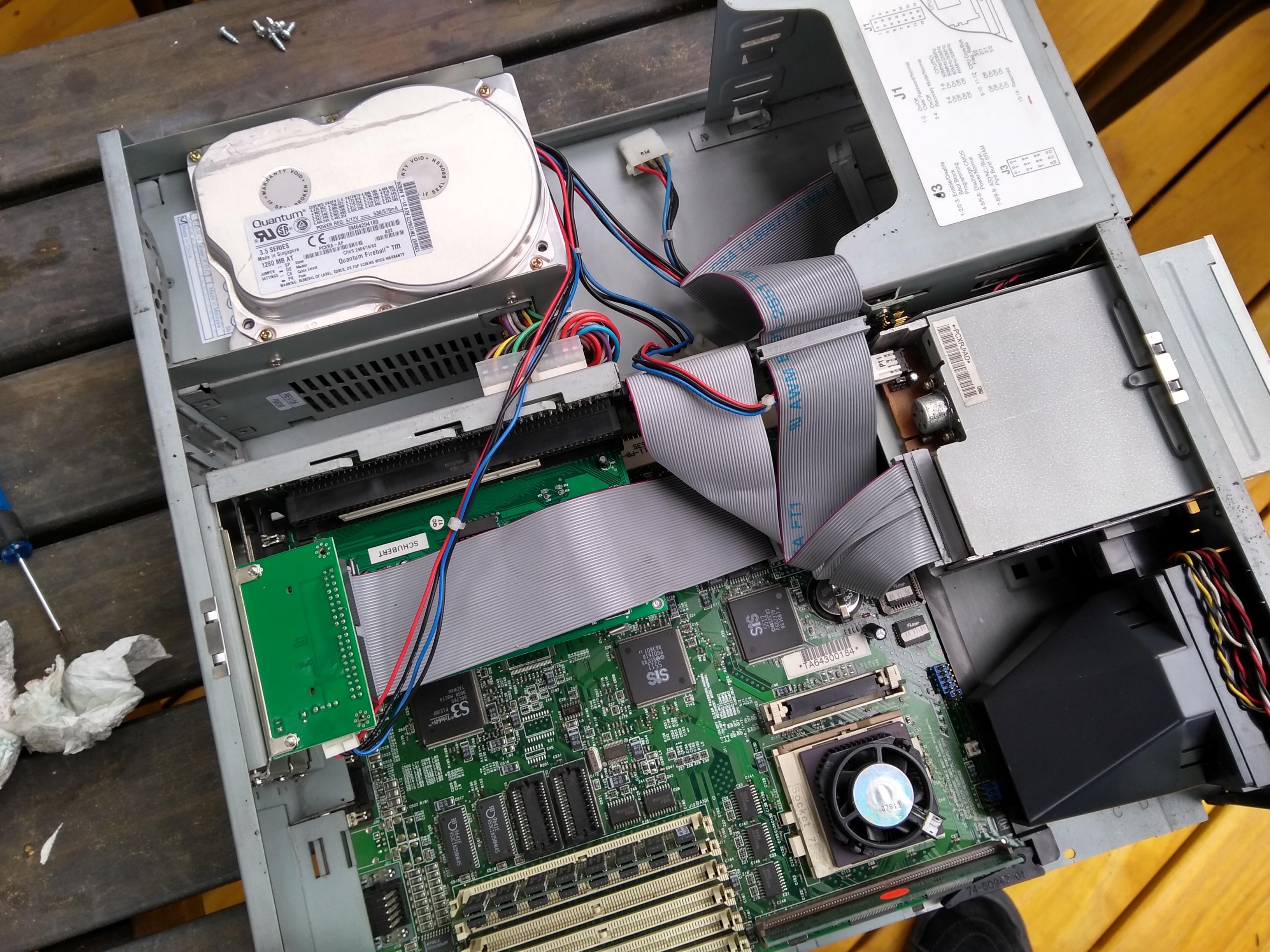 That's a neat system, with a cool backstory! Nice job cleaning it up. 😀

It needs a train whistle for a startup sound. 😁

Wow! New in box... that's a pretty rare item in that condition. Some nutty person will probably buy it.

Having had (and sold) a used one, and made... a lot... I totally don't blame the person for listing it high. People read about it or see it in youtube videos and they simply must have it. Whatever... it pays the bills and funds future projects. 🤣

Honestly, it's a nice display, but the price is mostly hype. Remember, it's nowhere near the newest CRT made, with many (Most? All?) being made before 2001. Later CRTs often have better refresh rates and specs, and the 16:10 ratio of the FW900 is much less useful for retro gaming... plus, when buying used, newer models may have far less usage, since LCDs became much more popular in the mid 2000s and people were replacing CRTs just to save space. Mitsubishi and NEC displays from 2003-2005 have great specs and don't reach the insanely high prices of the FW900. Some of the best will do a maximum of 2048x1536@86Hz, 1600x1200@109Hz, 1024x768@160Hz, etc. At lower refresh rates they are super crisp if they've been taken care of.