Bought some more parts for a 386 build:

On the hunt for some reasonably priced 60ns 4MB 30pin simms now.

Bought a Celeron III (700MhZ) system and also this newer Asrock G41M-LE motherboard, with dual-core CPU installed. Paid 5 EUR for everything. I've already successfully flashed the Asrock mobo to the latest BIOS. I don't know about other users, but I prefer PGA 370 socket directly on the motherboard, rather than slot 1 system.

Picked up a very cheap boxed Boss DR-330 "Dr.Synth" midi module with manual today. Battery had started to leak but I removed it and there is no damage. Unit works great

I've finally added an Atari ST to my collection. Never owned one back in the day, I've only ever used emulation briefly.

Ordered this a couple of days ago and received today - 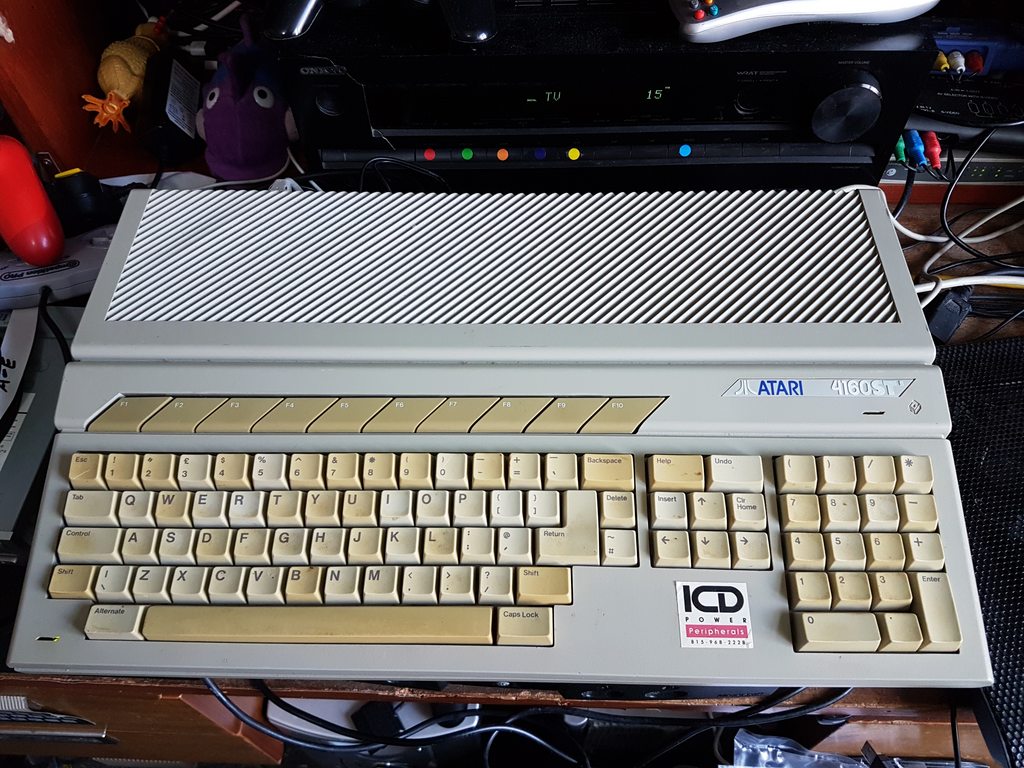 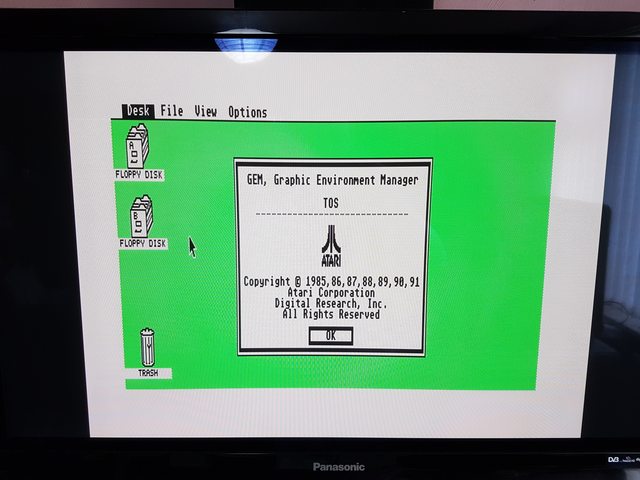 I took a gamble buying this from eBay. There was absolutely no information in the auction listing - literally nothing, the photos were blurry too. But it's turned up and aside from needing a cleaning (particularly the keyboard as you can see in the photo) it is otherwise in fully working condition, floppy drive & all.

Happily it also has a switchable TOS mod, with a switch on the side of the case to switch between TOS 1.62 & TOS 2.06.

Going to remove the floppy drive and add a Gotek for now. Probably will get an UltraSatan for it next month.

Good if it works, bad if it doesn't and can't be fixed. I consider it worth the risk though 😀

Card is described as working, it is a retailer and I am entitled to a free return (I don't think it will be needed 😁)

That doesn't look like a 9800 Pro to me, but I did find some pictures online of similar Palit cards being sold as 9800 Pros. We just had a post recently about these non-standard 9800 models. I'm not sure exactly what you've got there, but it isn't a 9800 Pro the way ATi designed them. The through-hole caps and the rectangular memory chips (and the layout) give it away.

Today I went to a thrift store on a whim, and I would like to think I cam out on top. I got a pair of working AppleDesign Powered Speakers and a SB16.

The latter will probably end up being used at some point, but the former will see some use relatively soon.

Today I went to a thrift store on a whim, and I would like to think I cam out on top. I got a pair of working AppleDesign Powered Speakers

A great score - are they decent quality? The bigger AppleDesign speakers are good bits of kit, quite loud and fit the bill when used on any Mac or PC of the era.

Today I went to a thrift store on a whim, and I would like to think I cam out on top. I got a pair of working AppleDesign Powered Speakers

A great score - are they decent quality? The bigger AppleDesign speakers are good bits of kit, quite loud and fit the bill when used on any Mac or PC of the era.

Found a couple of monitors locally, which is pretty rare. The 17" HP is better than anything I have :

Put it into production then :

I doubt these were user-modified overclocking cards... many many Geforce 2 MX cards were produced and sold without heatsinks. They could function fine this way and I have had at least a couple dozen like this in the last few years. For what it's worth, I have never come across an MX with an aftermarket heatsink.

Well, read this then 😀 https://translate.google.com/translate?sl=aut … po-pretaktovani
I would not run it without heatsink, after overclocking.
Personaly, didnt see GF2 MX without heatsink from decent company. Maybe some noname? Don't know.

Bought a Compaq Portable for an alright price, but could've been lower.

This one has a HardCard installed along with a NIC that has BNC and AUI-15 ports, and a RAM + RTC card.

Nice find on that HP monitor. We had one back in the day and it had a beautiful picture to it. I still wish we didn't sell it.

3Com 3C509B-TP ISA network card to hold an XTIDE ROM and give my 386 networking capability at the same time.

Maybe I'm missing something. I just searched that entire article for "heatsink" and only managed to find references to adding a fan to an existing heatsink and RAM-heatsinks for overclocking.

I would never dispute that more cooling is needed for overclocking of almost any chip.

However, to say that all GF2 MX cards came with heatsinks unless they were modified, is just not true. Not all MX cards were intended for overclocking. They were incredibly common in prebuilt systems, and the OEM cards used often had no heatsinks. I wouldn't expect big overclocks from these... core or memory. But I was never even talking about that, so... 😮

I just checked my "Big Box O' MX cards" and found these. Keep in mind, I don't have MX200 cards in this box... these are all Geforce 2MX (vanilla).

We have here two low profile nvidia-branded P180-0039 cards (labeled for Dell and IBM... they're identical to the one from the Dell I was posting about!), one MSI MS-8835 (built for Dell) and one Creative card (built for Compaq). All the most common names in the OEM add-in-card business from the time. No heatsinks at all. Also notice how the PCBs aren't discolored from heat. The cards work 100% fine without heatsinks and get nowhere near as hot as something like a Voodoo 3 (which burns and discolors the PCB over time, even with a heatsink... and yet some of THOSE were sold without them).

Anyway, my only reason for posting this is to clarify that the card in the Dell system posted earlier was not modified, and that those cards are extremely common, and are perfectly good cards as-is.

Yep, never saw such before, probably because Im still searching for GF2MX vanilla more than half year, noone has answered on my want ad. I alraedy have MX200 and 400 versions, but searching for vanilla too. So, you are tempting me with that screenshot of vanilla MX's . 😀

Would not probably had OEM version of this card before. All big companies, names, and I saw like at least hundreds of MX, MX200, MX400, all had heatsink on them. But it's true, none of them was OEM.

Thank you, for showing me non-heatsink versions. As far as i know, common cards sold in Box for customers as GF2 MX alone, always had heatsink. I saw so many pictures, of all various MX, from Asus to no-name, and all had heatsinks. Good to know, some OEM didnt have. Would probably sold worse, when would be sold in box this way. Because graphic card with heatsink looked more "cool" (not temperature-wise), and from Geforce2, in 2000 and 2001, everyone expected good results, so thats why probably they always included heatsink in boxed version. Anyway, it's 4W card, true, it can work probably without heatsink. But to be honest, as customer, I would for sure WANT to have heatsink on it, if you ask me. I would probably put heatsink, If I've got in some box this kind of GF2MX, I would really thought previous user took it away, cause I saw this kind of behavior lots of time, selling cards without heatsinks, although originaly they were put on.

Today, I've tested it, and it seems ok. Booted into BIOS.