If it's like most C64 power supplies it'll probably be filled with epoxy inside, so no chance of a simple repair job. It's easier & safer just to buy a modern C64 power supply replacement.

If it's like most C64 power supplies it'll probably be filled with epoxy inside, so no chance of a simple repair job. It's easier & safer just to buy a modern C64 power supply replacement.

Oh, yeah, that would make sense. At least it's simple 😀

Didn't actually buy this per se - as the cost was "If you ever get it to work, invite me to a gaming night". A friend texted me yesterday as he was cleaning out his garage and asked if this was something for me.

Apparently it worked 10 years ago, when it was last powered up. I don't have anything to connect it to (or maybe the old TV has an analogue tuner) and I'm also reluctant as I've heard the Powersupply should pose a great risk of frying the computer - or is it just a matter of opening and recapping?

First you need to check voltages on that PSU. Just keep in mind that it can blow at ANY time. Most of the times it releases a massive spike in voltage, in few situations it just dies. Anyway. If no picture, and voltages are fine, then it can be anything from dead VIC-II, over dead PLA to dead memory chips.

Getting it to work is most of the fun right? 😁

That is a nice job you have. Were you educated down in Sønderborg? I have a number of half finished educations from back in the 1990's, and I were a student down there at "skolepraktik". Back then it was called "Datamekaniker". Today it is just "Datafagtekniker". However, we were screwed over by the boss at skolepraktik, as he did not give us any jos that were related to the education. He sure was inventfull and had us all clean old 8088/8086 bank computers, that he then could sell for a profit. We were told by him, that all education related practice and chores, were something that we had to do strictly in our spare time. Well... It does not take much brainpower to figure out, that nobody passed any tests and examinations in class.

Anyway....
The PSU you have, are one of those wedge ones. It is a standard old school linear AC and DC power supply. Yup. 9v AC and 5v DC as far as I remember. The voltage regulator is the bad news regarding all Commodore64 PSU's. It is only rated at exactly what the machine is supposed to be supplied with. And taken that it is from 1984'ish, then it has degraded and will short out at some point. The good news about your PSU, is that most of the DC part is not enclosed in Epoxy. The square white ones have all parts inside a big lump of epoxy. 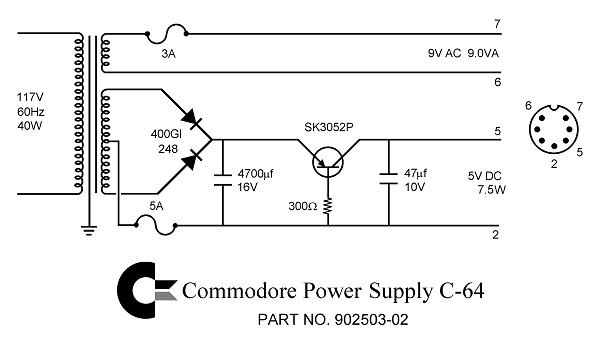 As you can see, then it is a relatively simple device. Nothing strange or anything, other than a regulator that are not rated high enough. When it goes, then it goes. And then it will send a major surge of power straight into the 5v DC line. The chips inside the machine do not have any protection. You know. Commodore cheap'ed out on so many things, and engineers like Bill Herd have said so many times, that they designed all machines for a max of 3 or 5 years use. He never ever thought or believed that we would still play with 8bit machines in 2021.

I will be sending you a PM, regarding places that you can ask for help at. Vogons do not have any sub forum for these old 8bit platforms, or even 16bit such as Amiga or AtariST.

Hmmm, usually what is to good to be true, it's not true... I don't think the seller has more them one card... But, good luck!

It´s just a scam... nobody would give them away!

and with free worldwide shipping...

They were probably abused and near dead exmining cards.

Definitely make a post about it when it comes in. I do hope we're wrong and you get a good card for a insanely great deal.

Yeah it's a scam. This happened quite a lot during the last GPU shortage.

I took a chance as well. I've had good experience getting money back on eBay (usually at lower price points though) when I received something different from the description and/or it didn't work.

I have no issues with purchasing used computer equipment at a reasonable price. If it works great! If not, oh well.

If its a scam i'll get my money back.

Yeah, that's SB compatible card. I have like 3 of them in various versions...

True scam. Sometimes I get a auction where seller listed for example 2TB M9T for 20 each and then suddenly ebay pulled the auction and refunded all the buyers. This had happened 2 times for me on two separate occasions with different items.

I think seller was trying to gather the money and ship bricks.

As someone who got swindled by a scammer on Twitter, I'm not taking chances either for those items.

$30. The most horrible disassembly ever, but not because of the strange design. In order to unscrew the fan cover I had to use a dremel eventually. The screws acted as if they were welded on, and you could see that they were factory-made. I understood why the cover of the second part of the "sandwich" was (unfortunately) broken by the previous owner. One of the fans does not work (when the voltage is turned on, it vibrates slightly. This white plasticine is left over from thermalpads. I ran it in dell optiplex 7040 with an additional external power supply without a fan to check if it works - I log into windows (w10), drivers are installed but In the device manager I see 2 GX2 GPUs with a yellow triangle. Well, I'm glad that I can see the desktop at all, because I did not expect that the card will even start in such an unusual config. Card is cleaned up and waiting for new thermalpads and a fan. The cheapest option - $4 (and the only one) are these two corrupted gpu`s:

The color and basic code of the fan is correct, but I'm worried that it only has 2 wires (the fan in gx2 has PWM). I can't find information anywhere if there were different PCB versions of these fans, I hope I can solder some additional wires.

Maybe someone has a gpu with this type of fan with two wires and can check ammount of pins.. i would be grateful 😀

I bought a Zenith Data Systems Z-425S+ yesterday. I don't know much about this system, I really couldn't find much about it online.

I thought i was buying a 386 -- which I really want, but when I opened it up I saw it was a 486. I couldn't read the model number from the poster's picture.

The battery was leaking, but from what I can tell it was confined to just the plastic holder. But just in case I'm going to pull the board out and check the back.

Hopefully this system works, and hopefully I can get into the BIOS.

486sx 25 is like fast 386 33 still good deal. Sometimes I am OCD about what exactly wanted to get so I paid little more to get 386 parts to rebuild my compaq computers.

have to look at model number on LG and take apart the optiplex 990 tomorrow, very late tonight, I was with my friend at their house for dinner after trip to V.V.