Which USB 2.0 cards for old motherboards

when i initialize insrall of 32gb flash usb2 on usb1 i experience a moment of crawl on the xp desktop with 2 x p3 @1000mhz and i then have to remove, re insert wait 12 seconds for access usb built in so yeah i am not surprised usb1 not very good for 486 but what about under 1gig flash smaller memory map
My VIA based PCI card drops out reading 4gb files. Total dissapointment. Thus I recommend steer away from supposed USB2 white USB port tongue port PCI cards. The VIA USB2 cArds must be USB 1.1 but suppoirt PCI V2.0 marketing mis interpretations? or just scams?

I am using this one on Win98SE but when i plug a flash drive usb stick the system seems to slow down a bit.
https://www.amazon.de/dp/B001628FXA/ref=cm_sw … ZZTVP11V95WRQ3H

If the stick memory map is massive it will do that it does it to my built in ports and those white tongue USB ports on the card you show say I am a USB2 wannabe.
I have a VIA chipset USB card with whte tongue ports too advertised as usb2 I plugged it into my 2014 pc and done a transfer test between it and my machines built in black tongue USB2 ports ufortunately more like usb 1 speed with legit 32gb USB2 flash memory by Toshiba
Perhaps they are the latest usb 1.1 and they just added the 0.9 as hype?

I think these VIA cards are seriously dependant on the cpu perhaps manual IRQ with mobo ones shut off? I am gettin an NEC maybe it will be both usb2 and less dependant on cpu resources has black tongue USB2 ports so i think i have a green light. if it is too dependant on cpu i'll find another (maybe an intel would be better)
Haven't seen any VIA USB2 PCI cards with Black tonggue USB2 I bet they be nice.

I would probably rely on USB2 for the minimum spec of super socket 7 with an AMD k6 for reliable use.
As far as 486? socket 3??? I'd settle for 100mbit LAN for data transfers, I mean, considering a null modem cable brings the 486 win95 desktop down to a crawl is a great tell tale sign that thing will be nasty with USB1. All USB uses a percentage of cpu to run and thats probably most of the 486 bandwidth. given most up to 44mhz fsb
So lets firewire away 486 doom game machines!

I mostly wanted USB support on my socket 3 system for thumb drive support, so much easier to transfer files that way.

The card I use now works but often locks up the system.

mine locks up but then it unlocks and i remove then insert it works so put it in walk away for say up to 4 hours for really slow pc *or* track down something like 256mb flash memory usb.... and still unplug and plug in again to use 😀
These VIA cards suck balls so next time i got for white tongue USB ports it will be with either Intel or NEC

ANYONE GOT A DRIVER TO RID THE FREEZER MAN?

Try something different for a change. You might be surprised.

ANYONE GOT A DRIVER TO RID THE FREEZER MAN?

Try something different for a change. You might be surprised.

Can you please make a thread about it?
asciimiliation detected! anti sudo terminal defences!

I happened to be going through my PCI USB cards today and tested them on a 440BX motherboard with Windows XP. None of the USB 2 VIA controllers worked; one was not detected and the other would cause the system to lock up.

I had very good success with NEC controllers. I did have some lockups when inserting a device at one point but I think that was due to a hardware conflict that I've since resolved. I haven't any issues since.

For fun I also tried a StarTech USB 3.0 PCI card. It did not detect at all. 😀

After trying this and that with usb 2.0 and 3.0 cards and for reasons of limited pci slots and the huge issue of the usb 2.0 cards slowing down the system, I’ve come to the surprising conclusion that to heck with them, add a hub to the onboard usb 1.1.

I’ve put these in both of my retro systems, one at first then the other after being so impressed with the first.

Highly recommend them for anyone looking into this topic

I'm using this in my P3B-F, it's working great here. I've got a older Socket 3 PC Chips board coming and will test it with that and let you know in a week or two.

Looks like this (picture from the internet as I can't get the card out right now.) 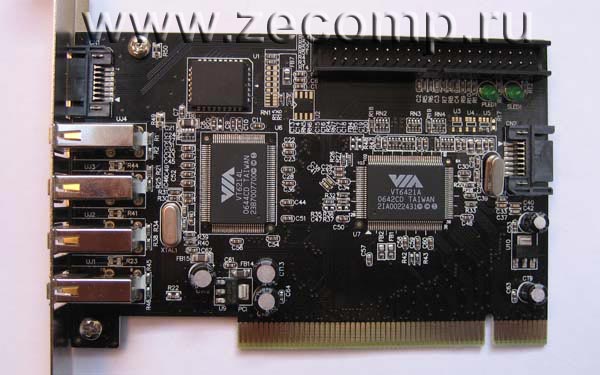 Not sure about the quality of the card, I got it only to not be limited to USB 1 speeds when moving stuff to the machine, and by now I can just throw stuff over network, but still, not the worst idea.